Land Roving in the land of the morning calm | Torque
Loading posts...
0 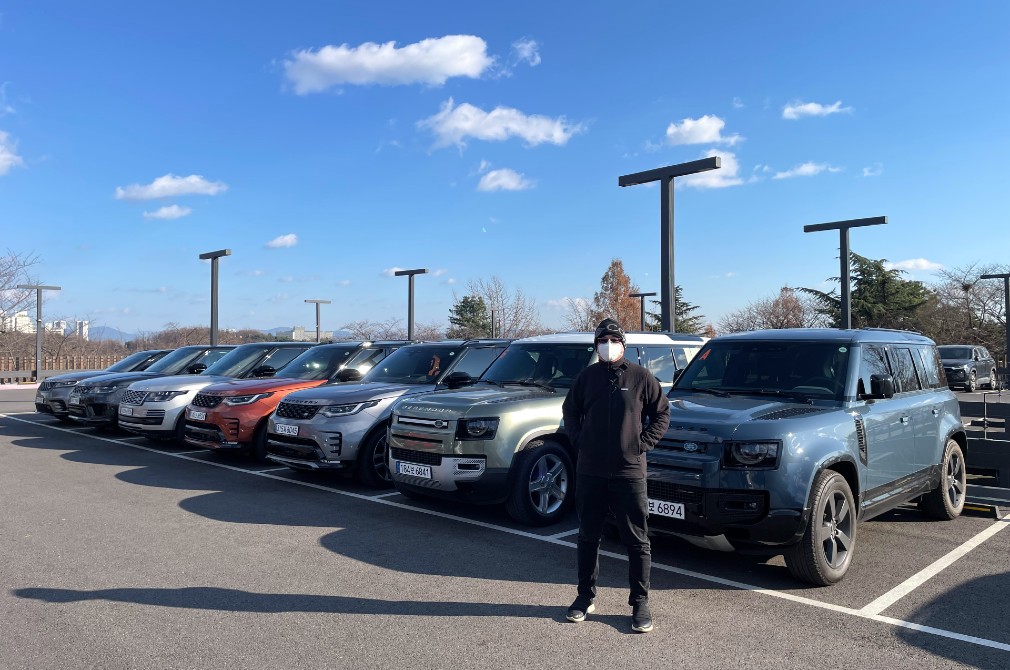 Torque‘s Tony Tan had decisions to make that morning.Given that travelling was all but non-existent since the pandemic began, I jumped at the opportunity to satiate my wanderlust while sampling a line-up of Land Rover’s latest models, and getting a closer look at the all-new Range Rover.

On the day of the drive, I was greeted by seven pristine Land Rovers parked in a row as I sauntered out of the Grand Hyatt Seoul.

Mind you, the driveway where the cars were situated was fairly huge, but the majestic line-up looked as if it occupied a sizeable chunk of real estate. This is in part due to the commanding presence that every Land Rover has, whether it is stationary or on the move.

The entire drive, which took the entire morning, covered about 200km. The route was a varied one, and included a mix of city, highway and country roads.

For the first portion of the journey, I was behind the wheel of the Range Rover Sport P360 HSE Dynamic. It was a model I last drove in 2019, when I was freelancing as an instructor for the brand at the Above and Beyond Tour in Laos.

Of the six cars available, it was the one I wanted to pilot the most, as I never had a chance to experience it aside from my driving instruction work. 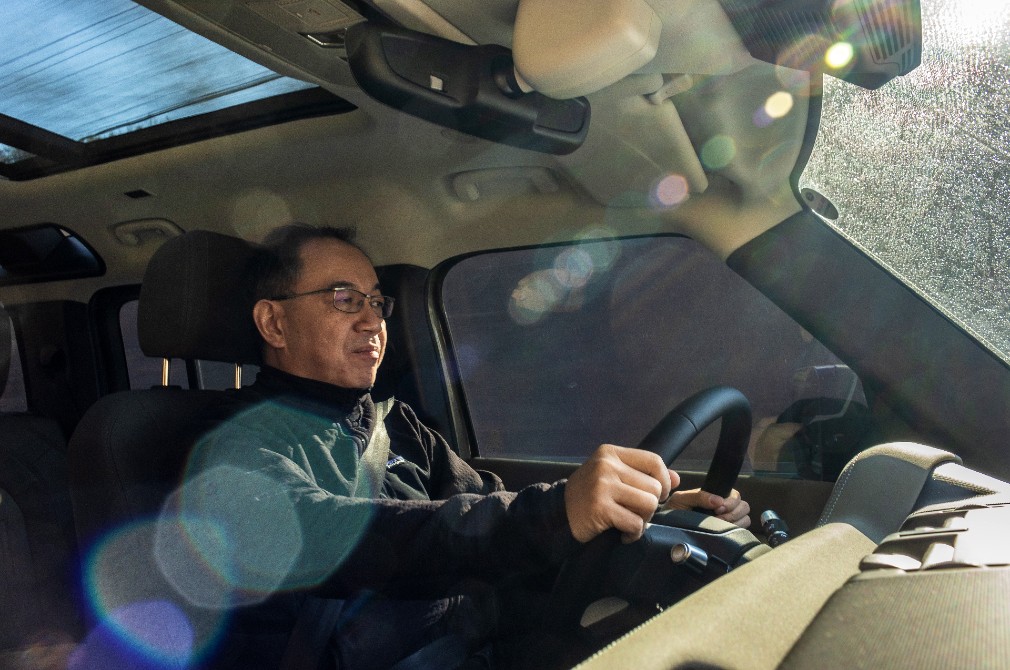 Tony may look serious, but he’s actually enjoying chilling to the sounds of Marvin Gaye here.

Two years on, the car felt remarkably familiar and within 5 minutes of setting off from the hotel, I was happily manoeuvring it in Seoul’s rush hour traffic.

Performance-wise, this is one of the top mild hybrid variants within the model’s range, with its turbocharged 3-litre inline-6 putting out 360PS and 495Nm.

The latter figure was extremely useful when I reached the highway and put pedal to the metal. I found myself overtaking rows of cars in mere seconds – not just one.

Interestingly, even when traffic slowed to a crawl and I had to change lanes, drivers allowed me to slot in front of them without much fuss. I was told that the local motorists were courteous and considerate if you signal your intentions early.

Once I cleared the gridlock, I activated cruise control, turned on the Meridian sound system, settled back into the driver’s seat and chilled to the tunes of my Marvin Gaye playlist.

When it came time to switch cars at the first stopover, there was a tinge of regret as I handed over the key to the next journalist. 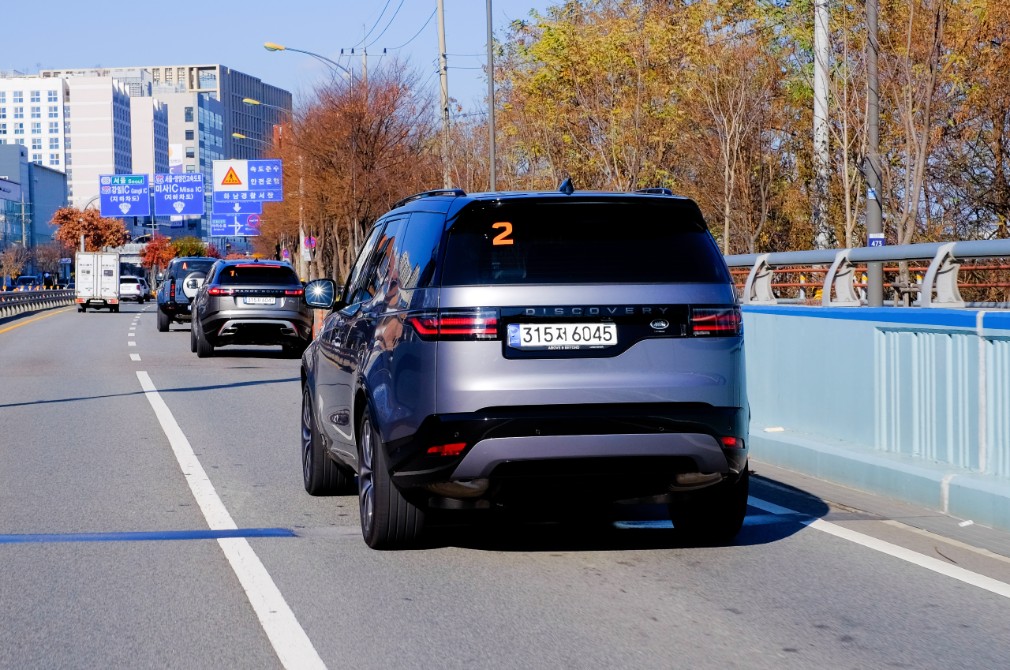 The route for the second portion of the drive was going to be the most interesting as it featured stretches of winding asphalt which traversed along the Han River.

There were also going to be a number of hilly roads, and I rubbed my hands in glee at this prospect. Better still, I would be driving I would be driving the smallest Land Rover model available for this trip – the Range Rover Velar P400 R-Dynamic HSE. With 400PS, it is also the most powerful amongst the six cars.

It didn’t take me long to sample to its prodigious performance. As the first car at the traffic lights, I selected the sportiest driving mode and floored the loud pedal when they turned green.

Land Rover claims that the Velar accelerates from zero 100km/h in 5.5 seconds and I will not dispute that at all. I was pushed back firmly into the seat as the car zoomed forward without any histrionics.

Meanwhile, the cabin was serenely quiet, save from the lovely note emanating from the inline-6 motor residing under the bonnet. The 8-speed automatic gearbox was silky smooth as it swopped gears speedily.

Zipping along the B roads, which were really narrow at some spots, the car was easy to place while the clever all-wheel-drive and 21-inch tyres ensured it stayed planted and stable. 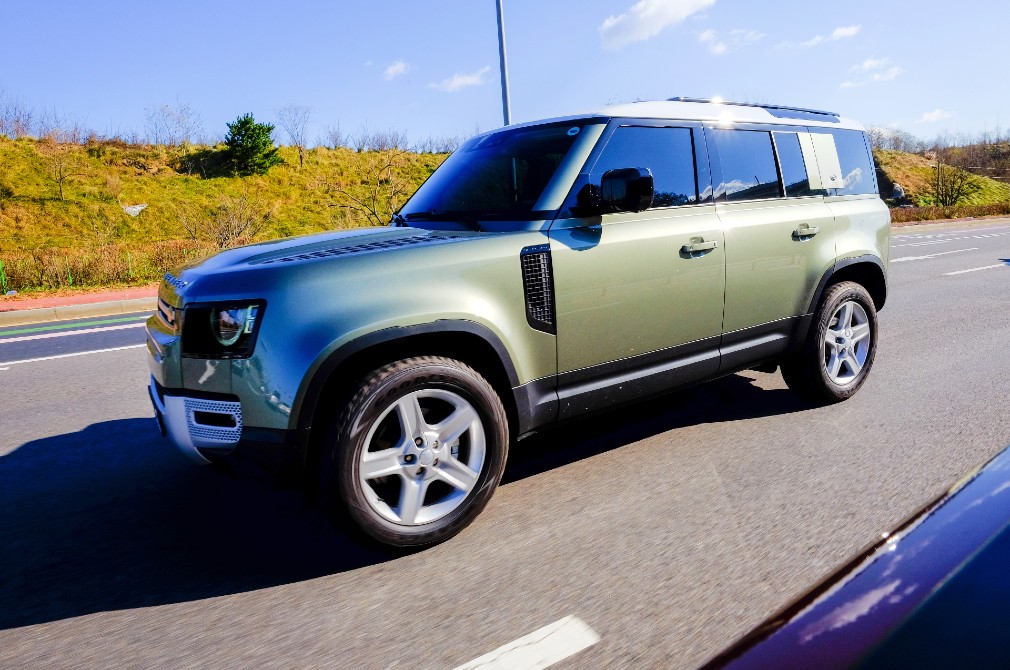 The third model I drove that morning is my favourite now – the Land Rover Defender 110. I remember the day I first saw it in the flesh – it looked so rugged and handsome with a conquer-it-all demeanour.

In every sense of the word, it is a huge vehicle – 2m tall, 2m wide and over 5m long with spare wheel. Compared to the more diminutive Velar along similar roads I drove the latter on, the Defender 110 was a lot harder to position.

To be fair, once I became more comfortable and trusted my instincts, the car became easier to manoeuvre along the country lanes.

One thing I could find no fault with is the drivetrain. The variant I drove is the Defender 110 D250 SE and it is propelled by a 3-litre, 6-cylinder turbo-diesel mild hybrid powerplant mated to an 8-speed automatic. 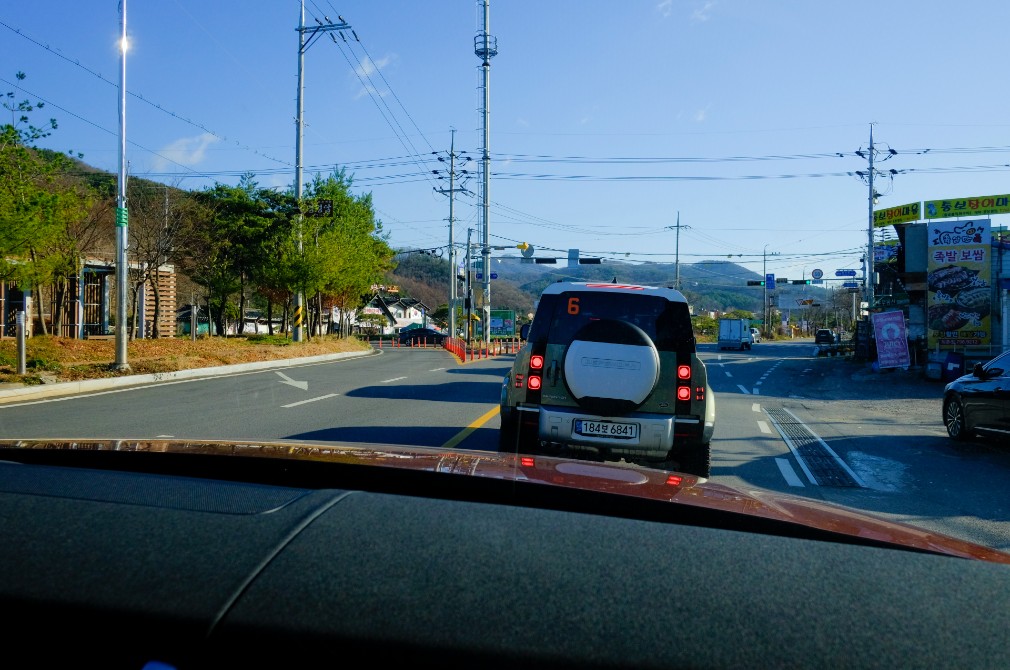 The Land Rover Defender may be sizeable, but its equally huge reserves of power mean most motorists will only see this view.

With a maximum of 570Nm of torque from just 1250rpm culminating in an 8.3-second century sprint time, I get a real hoot accelerating past smaller cars when their drivers least expected it. The sight of a hulk of a car overtaking them with such swiftness must be as surprising as it is awe-inspiring!

Apart from the Defender, Velar and Range Rover Sport, I also experienced the Land Rover Discovery as a passenger. In the driver’s seat was Alistair Scott, Jaguar Land Rover Asia Pacific’s knowledgeable and affable managing director.

As we headed back to the hotel, Alistair asked me about my thoughts and feelings after driving the cars. We also had an interesting conversation about the new Range Rover, which he presented at a private session. 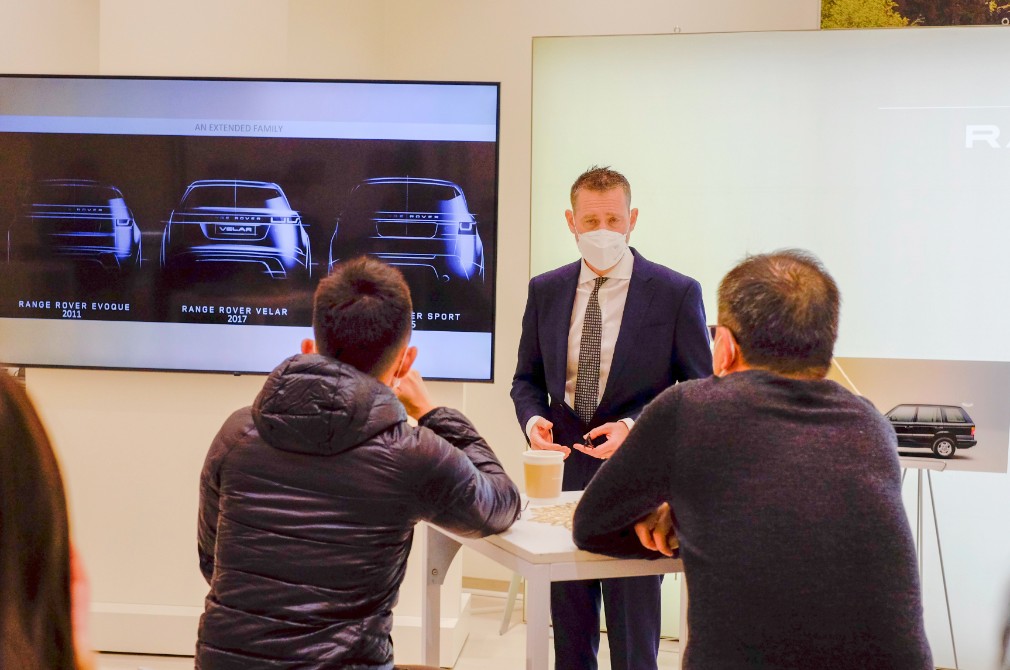 I was one of the first journalists in Asia, outside of South Korea, to view the all-new Range Rover, and the two-hour long, private event was a revelation.

At the session, I got up close and personal with two variants – the Range Rover and the Range Rover SV. Both are propelled by a BMW-sourced 5-litre twin-turbo V8. A noteworthy point – a pure electric version of the new Range Rover, which will be the brand’s first all-electric model, will be launched in 2024.

Alistair and I continued our earlier conversation at this event. I asked him for his five favourite things about the new Range Rover. He replied with six.

1. Design
“This could count as two points because it refers to both internal and external visual experience. The sloping rear roofline, the waistline that runs the entire length, and the sweeping lower line that finishes with a “boat-tail” at the rear.

All too often, designers are overcomplicating their design message, but the New Range Rover maintains an extraordinarily strong, uncomplicated design ethic. I absolutely love the rear tailgate too – it is simply stunning.

Inside, the effort to reduce the “confusion” caused by elaborate switchgear and too many colours, is evident. The new Range Rover may be our most advanced model to date, yet its simplicity, pertaining to many of the internal controls, is a masterclass in understanding the needs of a customer.” 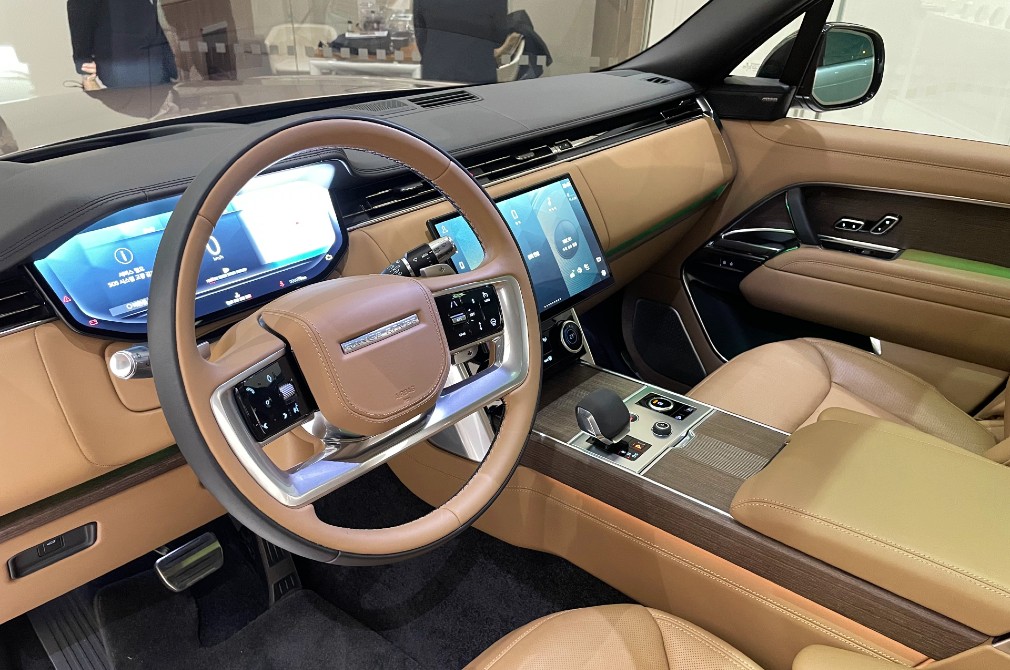 JLR says the new Range Rover’s cockpit is cleaner and more simplified than before.

2. Modular Longitudinal Architecture (MLA)
“The MLA is future-proof. It allows for all forms of propulsion without any compromise to its engineering principle.

“The MLA is designed specifically with our “Reimagine” strategy at its heart. It allows us to build a car fit for any global market and maximise its presence without compromising segmentation or emissions.”

3. Functionality
“The new Range Rover is available in SWB and LWB as well as with seven seats if needed. At launch, the LWB seven-seat version seat will be offered.

With a variety of seating configurations, this SUV will appeal to families that need extra seating, but without compromise – it is the first Range Rover with seven full sized seats.” 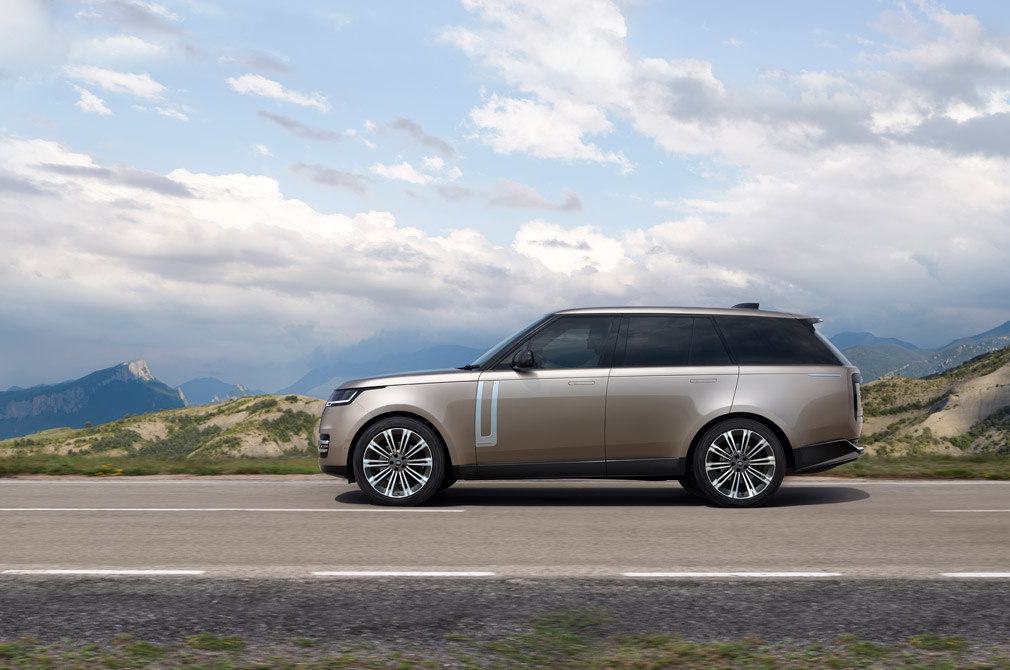 4. Hidden Secrets
“There is so much investment in the new Range Rover that is not immediately obvious – hidden panel-to-glass packaging, laser welded roofline and much reduced coefficient of drag which is best in class the tortional rigidity just to name a few.”

5. Range Rover SV
“The standard variant sends a clear and true statement from the customer. However, the highly desirable SV adds an extra dimension of bespoke design, colour combination and equipment specification. For me, the ceramic and veneer finishing are simply sublime.”

6. Positioning
“The new Range Rover does not want to muscle its way back into an increasingly busy, premium SUV segment – this would undermine its basic principles.

It is happy simply redefining and redesigning a segment for itself. If you continue to build a vehicle that is more concerned about what the competition is doing, it can limit where you want to take a brand.

The new Range Rover isn’t arrogant – it is confident in continuing to establish itself as the definition of luxury.”