Mercedes-Benz Vision EQ Silver Arrow is an insight into the future of racecar design
Loading posts... 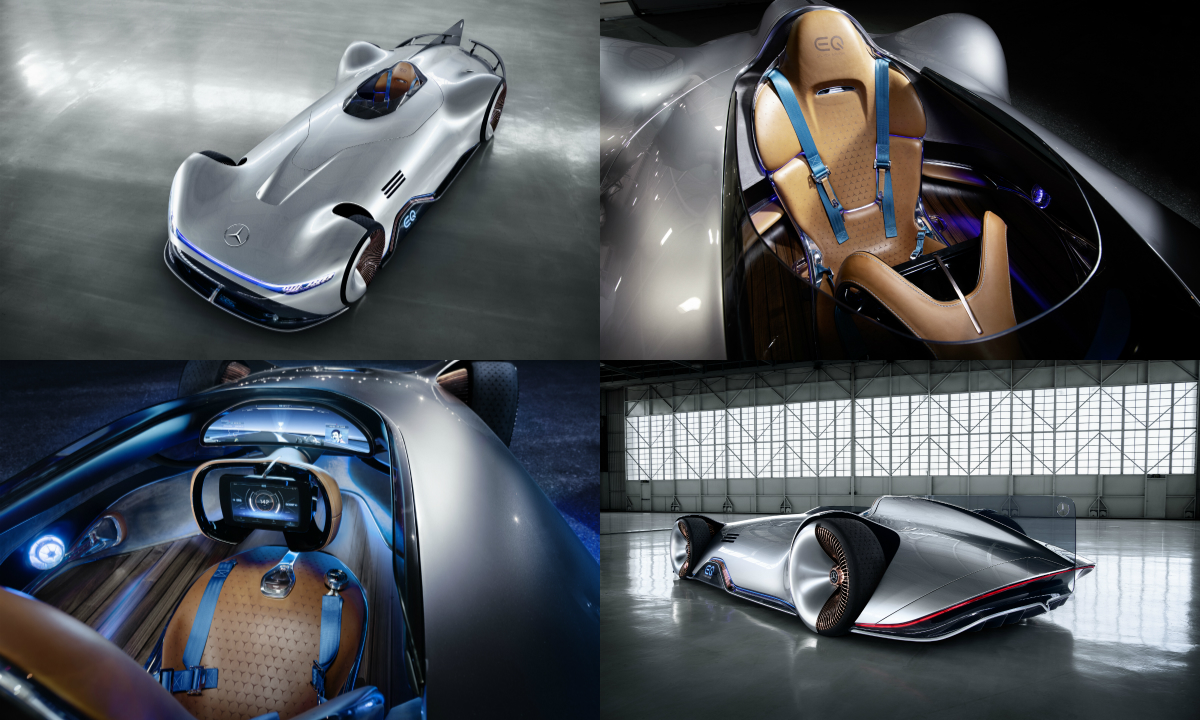 Intended for acceleration and driving pleasure, the one-seater electric concept vehicle embodies progressive luxury and is also an homage to the successful record-breaking W125 Silver Arrow racing car from 1937.

An emotive signpost to the future of racecar design, the one-seater vehicle is also an homage to the successful record-breaking W125 car from 1937. The paintwork in alubeam silver is reminiscent of the historic Silver Arrows which, for weight reasons, did not have a white paint layer. The interior is dominated by traditional, high-quality materials such as genuine leather, polished aluminium and solid walnut. The digital cockpit, meanwhile, points directly into the future – it includes a curved panoramic screen with back projection, as well as a touchscreen integrated into the steering wheel.

The streamlined silhouette of the approximately 5.3-metre long and approximately one metre shallow one-seater vehicle is slender yet sensuous. The show car’s body structure is made of carbon fibre. The multiple layers of paintwork in alubeam silver appear like liquid metal over the top. This concept represents the design polar opposites of “hot” and “cold”.

When the driver’s cockpit is folded forwards, it provides a view of the surprisingly wide interior. A contrast brings it to life – on the one hand, it uses traditional, high-quality materials, which include saddle brown genuine leather on the seat and steering wheel, polished aluminium throughout the interior and solid walnut with darker coniferous wood pinstripes on the floor, thus creating a bridge back to the historic racing cars of the Silver Arrow era; on the other hand, modern, high-tech solutions such as the large projection surface for the panoramic screen and innovative user experience solutions such as the virtual race option represent the EQ’s typically visionary character. This contrast is an intentional merging of past and future.

The driver of the Vision EQ Silver Arrow is encompassed by a large panoramic screen on which a 3D image of the surroundings is projected from behind. As a pointer to future possible charging technologies, the lane of the roadway on which inductive charging is possible is superimposed onto the screen.

With the help of artificial intelligence. it is possible to engage in a virtual race against historic or present Silver Arrow racing cars. For this a virtual racetrack is superimposed onto the real roadway on the panoramic screen and the driver sees their opponent either ahead of them or behind them as a “ghost”. The Virtual Race Coach assistance function helps you become a better driver by giving instructions during the race.

The Vision EQ Silver Arrow is conceived as an electric vehicle. This soundless Silver Arrow has an output of 550kW (750hp). The thin rechargeable battery in the underbody has a useable capacity of approximately 80kWh and enables a calculated range of over 400km according to the WLTP. Side air vents help to cool the battery.

Intended for acceleration and driving pleasure, the one-seater electric concept vehicle embodies progressive luxury and is also an homage to the successful record-breaking W125 Silver Arrow racing car from 1937.