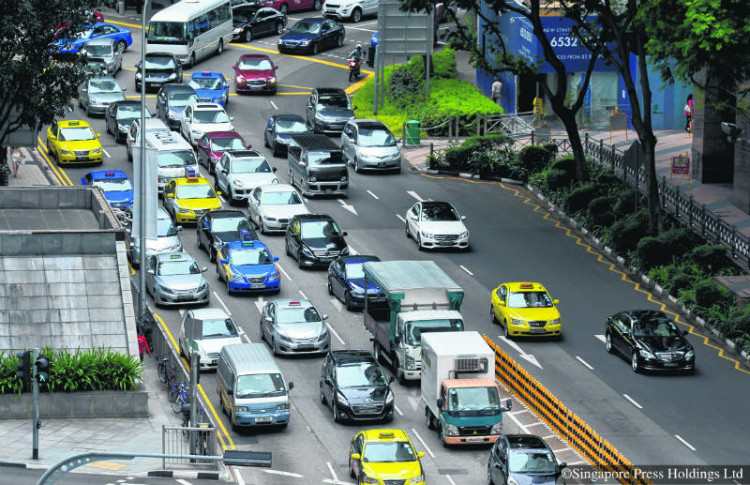 An aerial view of traffic along One Marina Boulevard taken on 22 March 2016.

More motorists are shelving plans for a new car, opting to renew the certificates of entitlement (COEs) instead when their cars hit the 10-year mark.

Industry observers say this is down to a variety of factors, including high COE prices and the uncertain economic climate.

In the first 10 months of this year, owners renewed the COEs for 24,050 cars, according to figures provided by the Land Transport Authority yesterday.

That is about one in four (27.2 percent) of the 88,357 cars due to be deregistered and eligible for COE revalidation.

In the same period last year, only about 11.7 percent of such cars had their 10-year COEs renewed.

Under Singapore’s vehicle quota system, a new car is bought with a COE that is valid for 10 years. After that period, car owners can either opt to deregister their vehicles, or renew their COEs and continue driving them.

They can renew their COEs by paying the prevailing quota premium (PQP) – an average of a COE premium over three months – for another 10 years. They can also opt to pay half the amount for a COE renewal of five years.

“Many of the owners who bought cars in the mid-2000s, during the COE boom period, may not be able to afford to get into a car today because the COE prices are higher now,” said SIM University economist Walter Theseira.

“Some people may be able to scrape together the money to pay for half of the PQP, but not for the down payment for a new car,” he added.

Singapore Vehicle Traders Association first vice-president Raymond Tang said motorists may be waiting for a fall below the $40,000 mark before jumping in.

Dr Theseira said motorists then hang on to their cars as an interim measure.

Whether it is waiting for the right price or the uncertain economic climate, Mr Tang said that by not deregistering cars, fresh COE supply will shrink and this will keep COE prices high.

Motorists who renew their COEs forgo the car’s scrap rebate, which is called the Preferential Additional Registration Fee (Parf).

While the Parf varies according to the value of the car and its age at which it is deregistered, Mr Tang said: “Why not take back your $8000 or $9000, for example, and use this money to pay for a second-hand car?”

Businessman Ken Ong, 41, is one motorist who chose to renew his Nissan Sunny’s COE two years ago. “I paid about $33,000 for a five-year renewal. The COE price was high back then. Also, my car has been very reliable, with few problems,” he said.