Who needs to buy a car when you can hire one? | Torque
Loading posts... 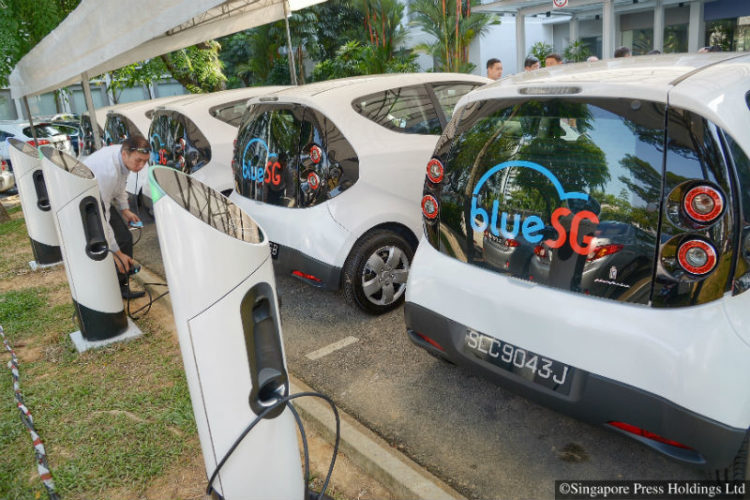 BlueSG Electric cars and charging points at LTA headquarters in Hampshire Road. Ang Mo Kio, Jurong East and Punggol will be among the first HDB towns to have a total of 50 EV stations and 250 charging points installed. The fleet is expected to grow to 1000 islandwide by 2020, with 2000 charging points in 500 locations.

As Singaporeans warm to the idea of not owning a car, car-sharing companies look set to ramp up their fleet. Still, there is lingering scepticism that the car-sharing concept would be embraced as part of the wheel-loving Singapore lifestyle.

Car-sharing is a pay-as-you-drive transportation service. It differs from conventional car rental as it offers greater flexibility to access and use. The hirer also pays only for the time and mileage incurred.

For instance, car rental companies typically do not allow their cars to be used for very short durations such as an hour, but car-sharing services generally do.

Said to have started in Europe in the 1970s, the concept first surfaced in Singapore in 1997, when a pilot car-sharing scheme with four cars was launched by NTUC Income Car Cooperative.

For example, Honda Diracc was a car-sharing service formed by the Japanese manufacturer in 2002 using a fleet of petrol-electric Civic Hybrids. But Honda gave up the business in 2008.

Car Club – which started in 2009 and used to be NTUC Income’s Car Co-op business – has about 230 cars now and plans to increase its fleet to 300 by April next year.

Smove, which was launched in 2012, has 230 cars and lets customers use them to run trips for Uber, a ride-sharing service.

A nation-wide electric vehicle car-sharing programme called BlueSG will also be launched in the middle of next year, starting with 125 cars.

These companies say they see much promise in the future of car-sharing here.

Mr Ho Kok Kee, 54, WhizzCar’s managing director, says: “We have seen interest grow progressively, and we expect the demand for car-sharing to increase as we make it more accessible.”

Mr Gary Ong, 38, managing director of Car Club, says: “From experience and the research worldwide, the demand for car-sharing will continue to increase.

“More people are finding that it may not be sensible to own a car when various alternatives are becoming more efficient.”

While Professor Lee Der Horng, 48, a transport researcher from the National University of Singapore, feels there is space for the car-sharing industry to grow in the next five years, he is not optimistic that the concept may be much more enticing beyond that.

“I don’t think car-sharing will be a game-changer in the local transportation landscape,” he says.

“In my opinion, engaging a car-sharing service is still more expensive than travelling via public transport.

“Car-sharing comes in only when non-car owners need to get to places not well-served by public transport networks.”

Citing Marine Parade, he says: “If I want to get there now, I might probably use a car-sharing service if I did not own a car.

“But when the Thomson-East Coast Line – expected to open in stages from 2019 to 2024 – is operational, would I need a car to get there quickly? I doubt so.”

While Mr Lai Meng, 57, president of the Car-sharing Association of Singapore, remains optimistic, he acknowledges that there are many infrastructure obstacles to the service’s growth here.

For example, he says, if a car-sharing operator wishes to set up a station at an HDB carpark, it needs to apply to the local grassroots organisation for approval. “This can take six to 18 months.”

Many grassroots leaders also give car-owning residents priority over car-sharing residents, he adds.

“Parking spots in popular carparks near town centres or MRT stations, in particular, are almost impossible to obtain. The carpark demands from car owners there are overwhelming.”

These obstacles, however, are not insurmountable, he adds.

“Since the time car-sharing came to Singapore, the experts have said it won’t work. But we have managed to be commercially sustainable for so long. Looking ahead, if we can overcome the infrastructure challenges here, I am confident car-sharing can really take off here.”