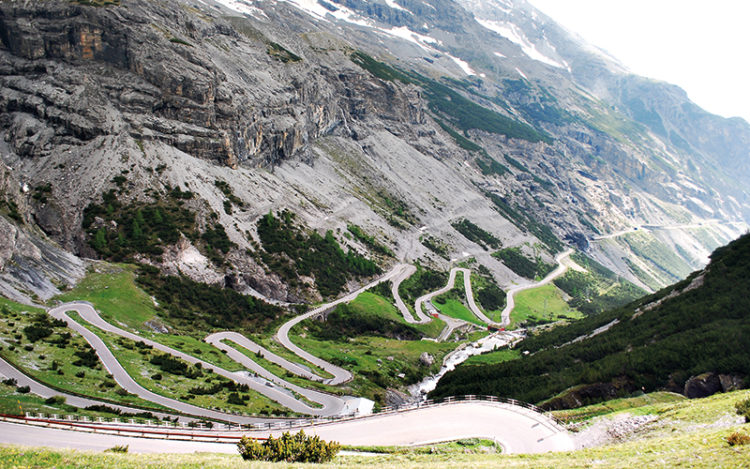 LEG 4 – STELVIO PASS AND THE END
The final highlight of my long road trip, and arguably the most stunning, was Stelvio Pass. Straddling the border between Switzerland and Italy, it is highly rated by drivers, motorbikers and cyclists alike, thanks to its dramatic beauty and steep hairpin inclines. Fitness types will no doubt be thrilled about getting their workout from climbing this road.

The initial drive from Grindelwald proved to be taxing, as it was nearly five hours behind the wheel, although we did go through famous towns such as Davos and St Moritz. Often used for global meetings of politicians and business leaders, these are little more than well-run outposts, with nothing much to offer in terms of scenery.

According to friends who have been in Stelvio before, the best entry to the pass is via Bormio, which requires a drive across the border to Tirano, Italy before heading up north on the pass itself. It was a gamble that extended the journey by an hour, but I took it anyway as I wanted to try both sides of Stelvio.

It was a stark change when we crossed the border. Italian roads, with their confusing signages, are a lot more chaotic and run-down. At some points, the roads seemed mildly dangerous. And the sign to the road that led up to the pass was just a thin strip of metal on a signboard shared with two dozen other signs!

The Italian side of Stelvio Pass was, frankly, terrifying. Some parts of the road were under construction, while others were literally built on what appeared to be newly blasted tunnels through solid rock. They stood precariously, and were only wide enough for one-way traffic. Very often, I found myself having to reverse my small Renault to give way to a train of cars coming from the other side.

I was extremely relieved to reach the summit and peer down at the more “civilised” part of the pass, which is what most visitors would photograph – the place of endless hairpins.

Sadly, going down the road was a slow affair, being too narrow to gather any speed safely, and with straights that aren’t long enough for a car to build momentum. It was a slight disappointment from the driver’s seat, but the location did make up for it with its jaw-dropping vista as well as its engineering – I marvelled at how a road of relatively short length can climb to such high altitudes.

With Stelvio conquered, I was ready to head back to London after 4800km and three weeks of intense driving. My car made it and so did I. Epic grad trip done and dusted!

Itching to do an epic drive of your own? You might want to read this book!
Chiang Rai road trip in a trio of Ferrari 488s!