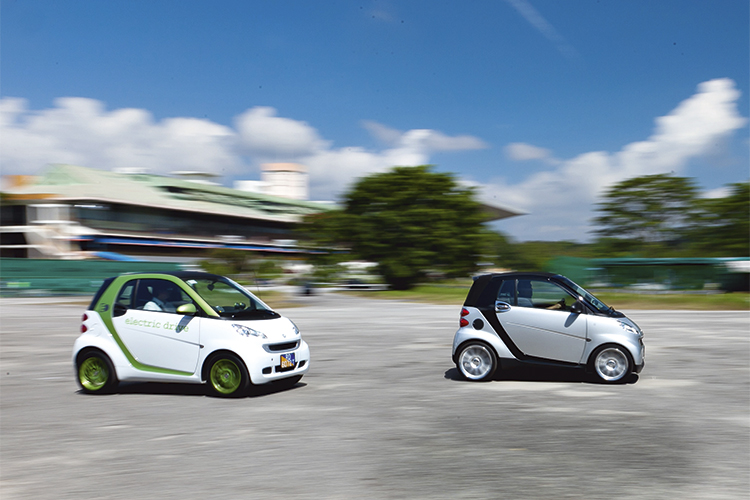 Playing chicken with the Smart Electric Drive’s battery makes the writer a nervous wreck on the roads.

Smart Electric Drive and electric toothbrush – what’s the primary difference? If the latter runs out of battery power, you can still use it to brush your teeth manually, but if the Smart Electric Drive runs out of juice, you’re automatically stuck. Chances are, this will happen at an inconvenient juncture, such as halfway to a dental appointment.

Making the toothbrush useful again is a cinch – just plug it into a wall socket, wait maybe 15 minutes and you’re good to go. Recharging the electric car is more of a challenge, since it requires a suitable power point and you need at least three hours to spare.

If the nearest power point is a couple of long extension cords away, the minimum downtime becomes four hours because you need to make your way to Mustafa Centre by taxi to buy the requisite wires.

Even Singapore’s greatest department store cannot help the stranded EV driver if his battery-powered machine can only be hooked up to a bespoke charging port. But the supplier cannot just set it up at any roadside like some parking meter.

The cost, complexity (despite the charger’s typically simple facade) and legal considerations (for relevant businesses and government bureaucracy) mean that a standalone recharge outlet never really “stands” by itself in a quiet corner. 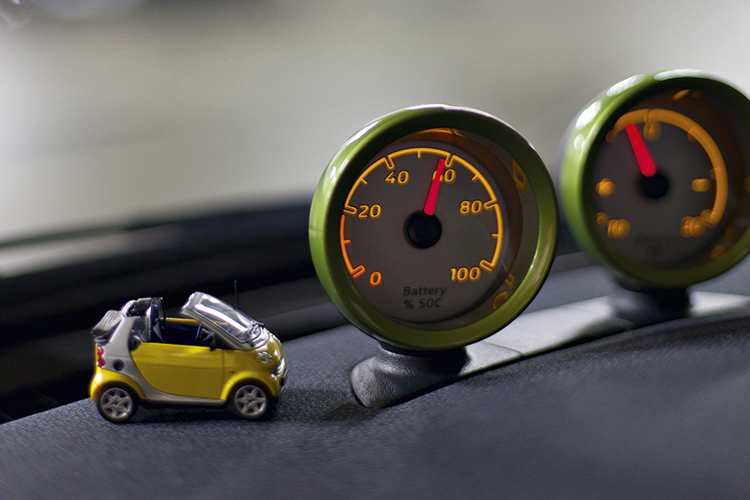 Corners don’t come much quieter than that occupied by the Bosch charging booth for the Smart Fortwo Electric Drive – the basement carpark of Centennial Tower, where Daimler SEA has its headquarters.

Last year, the German automaker brought in a fleet of 20 electric Smarts to participate in Singapore’s national EV test-bed programme, which will run to the end of 2013 under the Tides+ (Enhanced Transport Technology Innovation & Development) scheme that is jointly administered by the LTA and the EDB.

Approved electric vehicles such as the Smart Electric Drive (the other programme pioneer is the Mitsubishi i MiEV) are exempt from COE, ARF, Customs duty and road tax for an initial period of six years, but they are not passenger cars the general public can buy.

These are research & development cars (wearing yellow-and-blue “RD” plates) sold or leased to companies that sign up as test-bed participants and help to collect specific data for the multi-agency EV taskforce.

Apparently, the electric cars come with auto data loggers, but some manual form-filling by users is also needed for trip info such as weather conditions, air-con usage and number of passengers carried. 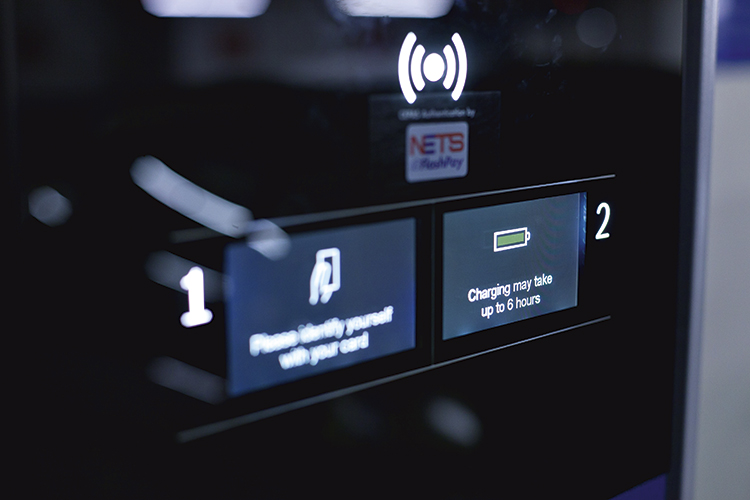 The Smart Electric Drive is no electric toothbrush – you cannot use the car once its battery runs dry.

The only form I have to fill out when collecting the Smart ED for the weekend is the usual Daimler paperwork, which applies to everything from an electric pipsqueak to an electrifying V8 AMG. Then, the manager passes me a “chipped” Flashpay Cashcard that allows me to recharge the tiny two-seater at the dedicated Bosch kiosk in the carpark.

For a start, I get a full “tank” of lithium-ion, which should be enough for 135 kilometres – in theory. The Daimler exec whispers that it’s closer to 100 kilometres in Singapore, which happens to correspond with the “100% SOC” (state of charge) meter atop the dashboard.

The other gauge shows in real-time how much kilowattage I’m spending (red zone on the right with a minus sign) or saving (green zone on the left with a plus sign) while driving.

Basically, red equals acceleration and green means deceleration. The needle swings far and fast to the right when my foot stomps on the go-pedal, and arcs anti-clockwise when I brake or release the “throttle”. The harder I brake and the steeper the downslope where I let the car coast, the more pronounced the regenerative effect.

I tend to charge up the tarmac in the Smart Electric Drive rather than slow down at every opportunity to help “refuel” the fella, so I average barely 10km for every 10% drop on the battery indicator. The power pack is drained most rapidly when it’s pedal to the metal, which has the 20kW magneto-electric motor producing an “overboosted” 30kW for up to two minutes at a time. 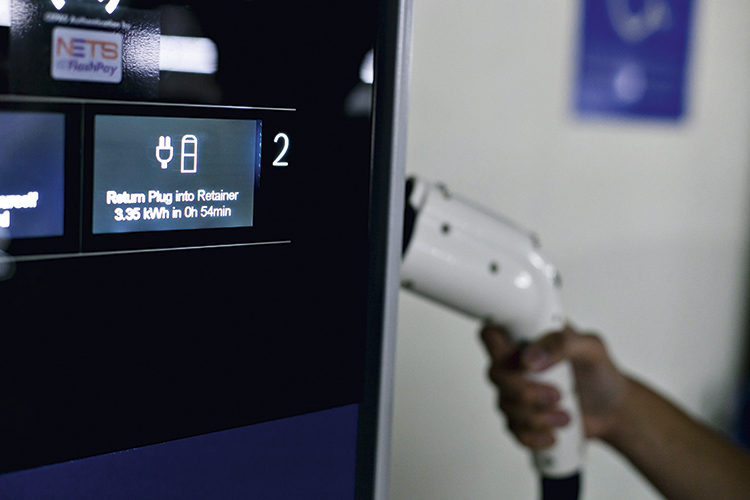 Scooting from a standstill to 60km/h in 6.5 seconds is shiok, but a shock to the electric system. Sonata cabbies are even more shocked by how quickly the strange little car covers the first 50 metres or so when the traffic lights turn green.

It’s a lot slower accelerating from 60km/h to 80km/h, and sluggish adding another 20km/h to reach its top speed of 100km/h. Throw a long incline into the mix and Cherys start overtaking the Smart like Chinese Ferraris.

One way to “save batt” is to keep the air-con switched off and sweat it out, but this softie is unwilling to do so, unsurprisingly. What’s surprising is the lack of turbulence at speed, with the only minor annoyance being the radio antenna (mounted at the base of the left A-pillar) quivering in the wind.

The dominant sound is that of the electric thingamajig below the boot floor when it, well, does its thing. It’s a mild mechanical shrill that makes me feel like an action figure driving a radio-controlled car (assuming action figures have feelings, of course). 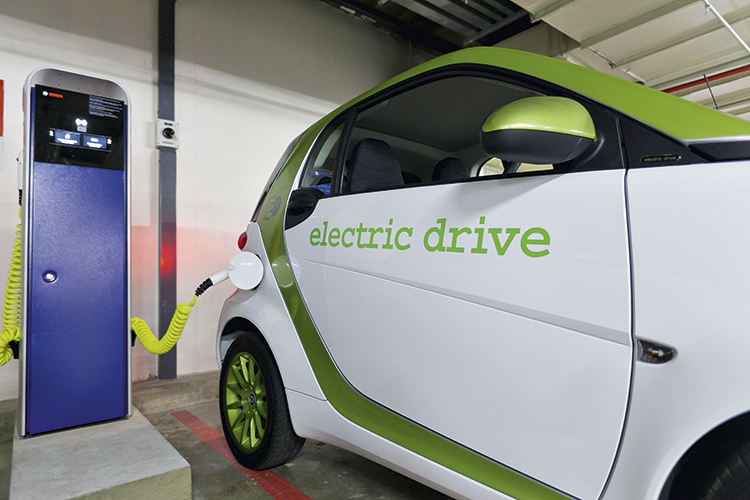 “Pumping” electricity is easy with the Smart Electric Drive, but kiosk display doesn’t indicate the battery level as it gets recharged.

This human figure is like an accidental celebrity, with women and children alike screaming “So cute!” or “Wah, electric drive!” (what the door decals say) when the Smart zips quietly into their vicinity.

Curious folks ask me, “Can travel how far?”, to which I answer, “100 klicks or so, more if you go slow.” The friendly uncle who runs Old Tiong Bahru Bak Kut Teh wonders whether he can recharge the car from any power point in his shop and is disappointed when I tell him it’s not possible, at least not yet. He tells me in Mandarin, “That’s inconvenient lah!”

Hoping to avoid the inconvenience of running dry in downtown traffic, I start driving the Smart ED at a gingerly pace once it has less than 40% in reserve. Now, that is probably enough energy to make a round trip on the Central Expressway, but being a typical kiasu Singaporean, I prefer not to take a chance. So, I steer back to the Centennial carpark.

As I position RD6072T beside the Bosch recharging booth, I spot RD6073R and RD6074M parked nearby (Daimler has three Smart EDs in its company fleet). Maybe I should have arranged for two of these special Smarts, so I can swop cars when my ride needs a recharge. It’s like having a fully charged spare battery for my smartphone. 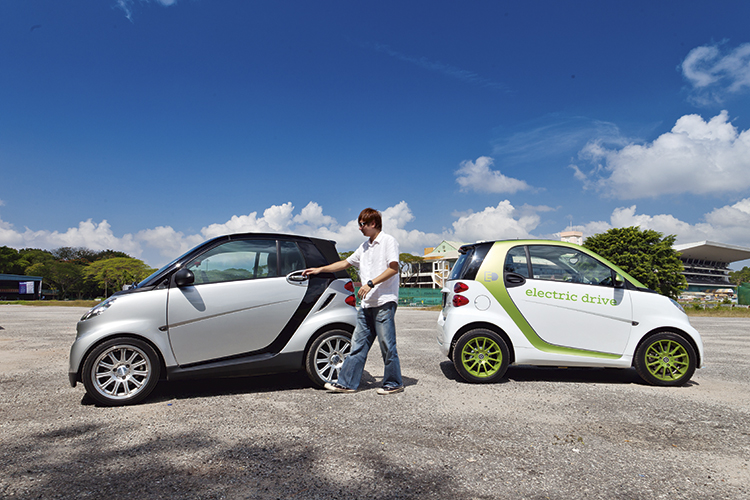 Anyway, after I plug the Smart into the “system” and ensure that the juice is flowing from the grid to the ED (accompanied by high-tech clicking sounds and lit-up battery gauges), I stroll to Promenade MRT station and head home in a much larger electric vehicle.

The next morning, as I sit in another Circle Line train, I start worrying about whether some prankster unplugged the Smart from its charger in the middle of the night. Soon enough, I’m back in the car, thankfully still plugged in, but there is no more clicking and the all-important dash-top meters are no longer lit.

Fully charged already, perhaps? I insert the key into the “ignition” slot behind the “gear lever”, twist and everything lights up, but the battery gauge is still showing zero! Only two seconds later does the pointer sweep all the way to the 100% mark. Phew!

That’s enough anxiety for an otherwise relaxed Sunday morning. So, I stop driving the Smart ED like a classic Mini – right pedal pressed into the floorboard, staying off the brakes and maintaining as much momentum as possible. I start pottering about instead, taking my time from point to point and resisting the urge to put all 120Nm of torque through the single-speed transmission.

For the rest of the weekend, I imagine I’m cruising in an over-engineered golf cart – finally free from hot fuel and cold feet.

How to charge up the use of electric cars in Singapore