To be car-lite, be road-lite and carpark-lite | Torque
Loading posts... 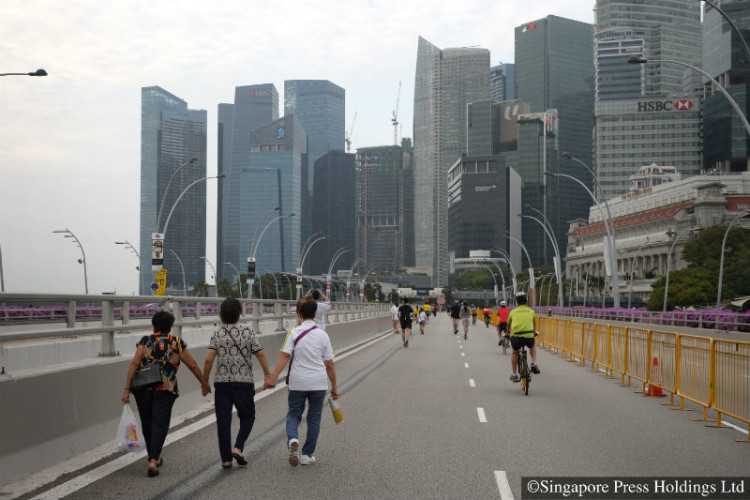 Strollers and cyclists along Esplanade Drive during car-free Sunday on 27 March 2016.

Singapore’s journey to a car-lite future just got a bit smoother.

That’s how it feels after two recent announcements about parking charges being raised and the plan to introduce a nationwide electric car-sharing scheme.

It’s taken some time for the country to make this right turn on its way to a more people-friendly city less dependent on motorised vehicles.

But it’s also been a zig-zag affair, with several wrong turns and dead ends, which makes you wonder if there ever was a road map to begin with.

Why do I say this?

Singapore’s transport policy at times has been a puzzling mix of being the world’s No. 1 hater and lover of cars, all at the same time.

This is the hate part: As far back as the 1970s, the country started introducing severe measures to curb ownership and usage of cars on its roads because it did not want its city to be clogged with traffic the way many others had been, including Bangkok, Kuala Lumpur, London, Seoul and Paris, to name just a few.

The vision seemed clear then – it would do whatever it took to keep the roads free-flowing because congestion was inefficient for business and made the city less liveable.

So, it introduced the world’s first quota scheme for cars, which limited their numbers and made Singapore the most expensive place on earth to own a car. It was also the first to have a city-wide electronic road pricing system.

The war on cars appeared unrelenting.

But there was also this love bit: It started a massive road and carpark building programme, making driving and parking a breeze compared to many other cities.

From the late 1960s, expressways like the PIE, ECP, CTE, AYE, BKE and KPE, countless flyovers and roads were built all over the island.

At times, it almost felt like there was an army of road engineers ready to attack the next bottleneck wherever it appeared by widening lanes or building flyovers. Perhaps the most high-profile example of this was the demolition of the iconic National Library in Stamford Road to make way for a road underpass.

Many Singaporeans were beside themselves that a place which meant so much to them had to make way for a hole in the hill to allow cars to pass through.

As a result of all these years of tarmac laying, 12 per cent of land is now used for roads, a tyre-screeching number in land-scarce Singapore where its 5.54 million people are squeezed into 14 per cent of land set aside for housing.

But Singapore’s road-building programme found its match in the equally zealous effort to build carparks. I can’t think of any other city which allows so much space to be used for this purpose.

In fact, at one time, there was even a law requiring building developers to set aside a minimum number of floor space for indoor parking.

This law has since been changed, but if you thought the authorities had finally applied the brakes, look no further than the recently opened National Gallery at the old City Hall next to the Padang.

It’s a splendidly restored art museum costing $530 million to build but a chunk of the budget was for construction of an underground carpark.

Why the need for a carpark?

If you visit any of the world-class art galleries or museums in London, Paris, Tokyo or New York, you will find that hardly anyone drives there. They take the subway, and indeed there is an MRT station located near the National Gallery, called City Hall.

One other example of how readily available parking space is here: It has been said that the reason taxi drivers in Hong Kong drive much longer hours than their Singapore counterparts is that they can’t stop and park anywhere. There is no parking space in the city for them to do so.

In contrast, here, you can find any number of idle taxis parked in HDB or URA carparks.

You might argue that roads and carparks are needed to make sure traffic is free-flowing in the city, and that the Government was consistent in its policy of ensuring this.

The problem with this car-friendly approach is that it merely fuels the desire to own and use cars.

That’s why the cost of certificates of entitlement has soared – it’s the price Singaporeans are prepared to pay for the wonderful job the Government has done to make driving such a pleasure.

Meanwhile its other half is devising more plans to curb car ownership and usage.

Why this love-hate relationship?

Part of the problem, I think, is the way the cost of building roads is calculated against their perceived benefits.

The actual cost of the land is not included in the calculations because roads are generally considered as part of infrastructure essential for economic activity. Strictly speaking, this isn’t incorrect but it severely understates the true cost of the land, some of which is the most expensive real estate in Singapore.

On the other hand, transport planners are only too quick to point out the benefits of road-building in reducing congestion but they often forget the new road quickly becomes clogged up from new traffic attracted to it, and the benefits disappear overnight.

When cost is understated and benefits overstated, road-building goes into overdrive, which I believe is what has been happening in Singapore. A new way should be found to overcome this and better capture the true cost and benefit of road-building and widening.

There is one other downside to roads and cars- they make the city less friendly to pedestrians, squeezing them out of the available space and polluting the environment. How much of this cost to the city’s liveability is captured when engineers do their cost-benefit calculations to support another road being built?

If it isn’t included in the analysis – and I doubt it is – that’s another pothole that needs filling up on the road to a car-lite future. To be fair to the Government, it has changed course in recent years, promoting public transport, cycling and car-sharing.

But it can do more to overhaul old ways of thinking about roads and carparks.