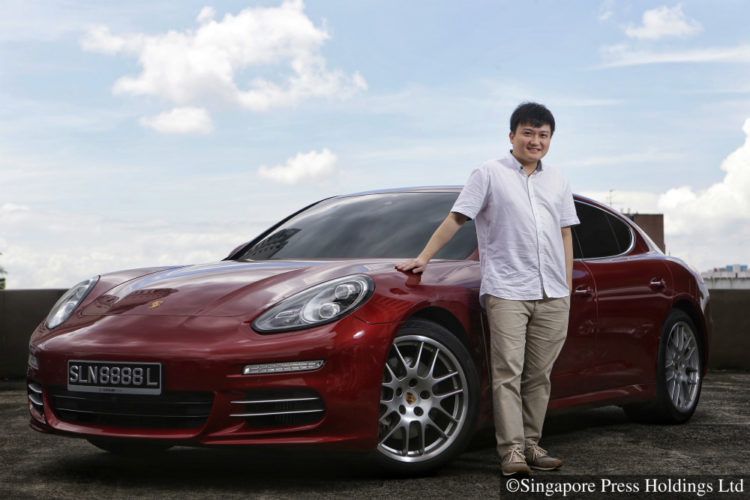 Mr Anthony Fok, who runs a tuition centre, takes his students for a ride in the Porsche Panamera S when they do well in their tests.

Mr Anthony Fok is a tutor who drives a red Porsche Panamera S with an “8888” registration plate.

The 33-year-old paid about $450,000 for the secondhand Porsche, which was then about three years old, in March this year.

While he acknowledges that the ride can appear “a little flashy”, he says it was bought with his hard-earned money. He owns a tuition centre which specialises in A-level economics. Its annual turnover is “more than $1 million”, he says, adding that he earns about $500,000 a year after deducting costs.

“I work every weekend from morning till night,” says Mr Fok, who is married with a six-year-old son. His weekdays are spent preparing lessons, writing assessment books and addressing questions from his 300 students.

The Panamera S replaced a nine-year-old Mercedes-Benz S350 that was due to be scrapped this year.

Mr Fok’s first car was a secondhand Chevrolet Aveo bought in 2005, when he was still an undergraduate at Nanyang Technological University.

“I was already giving tuition at that time,” he says. “It was a red-plate (weekend scheme) car. I can’t remember how much I paid for it.”

He has since also owned a Honda Civic, a Toyota Vios, a Renault Scenic multi-purpose vehicle and four Mercedes-Benzes – E230, SLK200, B200 and S350.

All were secondhand except for the Honda Civic, which he bought in 2008. He sold it within one year because he had just started working and could not keep up with the $700 monthly payment for the car.

“I never bought a new car after that,” he says. “The depreciation is just too steep.”

He was introduced to the Panamera S by a friend who is a member of the Porsche Club Singapore. It was put up for sale at Eurokars Pre-Owned, the used car division of Eurokars Group, the Porsche distributor here. 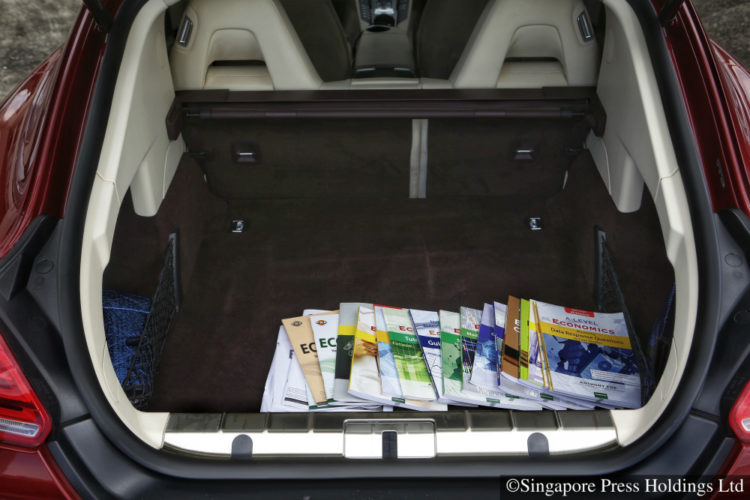 In the boot: a stack of assessment books.

“The car was about three years old, but it has clocked only 2500km,” he says. “The salesman told me the car belonged to Mr Karsono Kwee.”

After buying the car, Mr Fok put in a $12,000 bid with the Land Transport Authority for the car registration number SLN8888L, which he won. “The number is for good luck.”

“The luck got better after I got the new number.

He adds that the Porsche is the “most extravagant thing I have bought”. “I never thought I would buy and drive a Porsche one day.”

He says that he suffered a mild stroke and was hospitalised in 2015. After that, he decided to live a little. “The car is a treat for myself,” he adds matter-of-factly.

Before buying the car, he also had the impression that Porsches are driven by flamboyant people. “I am a low-key person,” he says.

After having driven the Panamera S for about seven months, he has changed his impression of the brand. “It is very comfortable and sporty at the same time,” he says.

His students occasionally get a treat, too, by getting a ride home in the Panamera S when the lessons end late.

“I also take some students out for rides when they do well in their tests,” he says with a laugh. “It’s a form of encouragement and reward.”

On whether a tutor driving a luxury car might give the wrong impression to his students and their parents, Mr Fok says: “This is also a sign of success. It shows that a tuition teacher can be successful in his career too.”