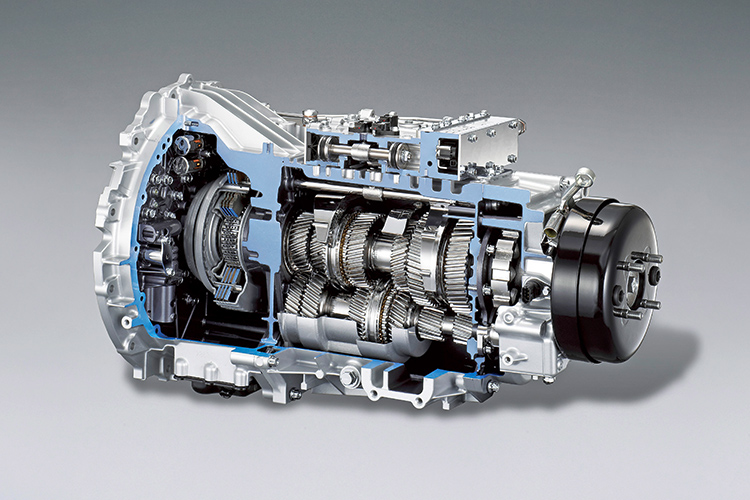 A dual-clutch gearbox from Fuso.

My friend told me that my car’s transmission is a “double-clutch”, while his is an automatic.

I drive my car like an automatic. What is the difference between them?

The traditional automatic transmission has been around since the 1940s, while the dual-clutch gearbox or double-clutch transmission (DCT) is only about 15 years old.

The power in an automatic is transmitted through a torque converter, which is a fluid coupling. It is like two separate “impellers” in a sealed casing filled with a special fluid.

When the impeller on the engine side turns, the fluid acts as the medium to propel the impeller (actually called the turbine) on the gearbox side.

In modern automatics, there is also a lock-up clutch that engages, usually at cruising speed, to ensure zero slip or equal speed of both impeller and turbine.

The dual-clutch gearbox, on the other hand, transmits engine power to the gearbox via a friction clutch arrangement and does not rely on fluid as the transmitting medium.

The clutch is disengaged when a different ratio is selected – like in a manual gearbox. Gear selection is achieved via electro-hydraulic actuators working in unison with the clutch.

The ingenious aspect of a DCT is that there are two sets of clutches, allowing the subsequent gear to be pre-selected, so that the process of gear change is essentially a switching of duty-clutch from one to the other.

This is why the DCT works faster and more smoothly than the manually operated gearbox.

With the DCT, there is no speed difference between input and output shafts, making them marginally more efficient. However, while moving off from rest or driving at very low speeds – such as when looking for parking space – clutch slip would take place for smooth progress.

The latest automatic gearboxes are almost as quick and as smooth as a dual-clutch gearbox. They are also more suitable for engines with extremely high torque output.

Why does my automatic gearbox make a clunking sound when I shift from P to D?

Interesting facts and figures about making gearboxes in the Volkswagen Group

Will I damage my automatic gearbox when I skip gears using paddle-shifters?