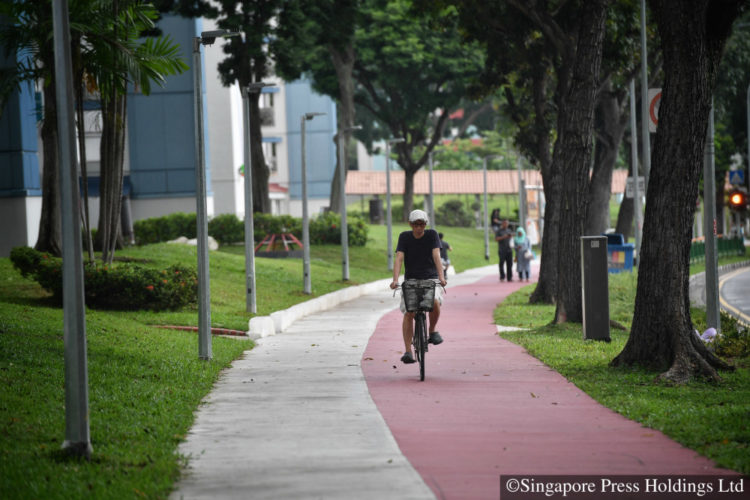 Designated bike lanes, like this one near Heartbeat@ Bedok, are painted red to distinguish them from regular footpaths, making Bedok the second town with such red lanes after Ang Mo Kio.

These lanes are painted red to distinguish them from regular footpaths, making Bedok the second town with such red lanes after Ang Mo Kio.

The network connects residents to major amenities in Bedok, such as the Bedok Integrated Transport Hub, Bedok Mall and various hawker centres.

It is meant for cyclists and riders with personal mobility devices (PMDs), such as hoverboards and electric scooters.

Manpower Minister Lim Swee Say, who is an MP for East Coast GRC, opened the completed network at Heartbeat@Bedok yesterday. The network will help Bedok residents complete their first-and-last-mile journey from home to other amenities, he said.

“With the opening of the Bedok network, we hope to bring residents more convenience. But cyclists, please remember, your convenience should not cause inconvenience to other people, so please be considerate on the paths,” said Mr Lim. 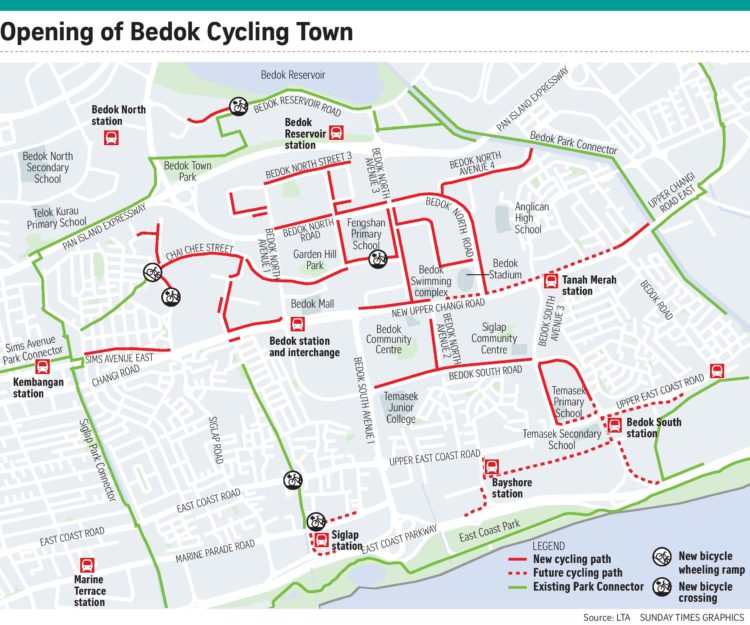 Construction of the Bedok cycling network started in the middle of 2015.

The network will also be linked to National Parks Board’s 4km Outdoor Play Corridor, which connects Bedok Reservoir Park and East Coast Park, when it is completed.

There are also more bicycle parking boxes at high-traffic areas such as MRT stations, bus stops and void decks, along with wheeling ramps at staircases.

The network will be expanded to include new MRT stations on the Thomson-East Coast Line in Bedok, such as Siglap and Bayshore, when they open after 2020.

The Bedok cycling network falls under the Government’s plans to construct a 700km islandwide network of cycling paths by 2030, which will be in all 26 Housing Board towns.

Bedok resident and avid cyclist Jason Lee, 44, said: “The wider paths make it more convenient for me to get around to run my errands.

“There are also some wider lanes built behind some bus stops, which give us more space to go around crowds waiting for the bus. It’s safer for everybody,” he added.