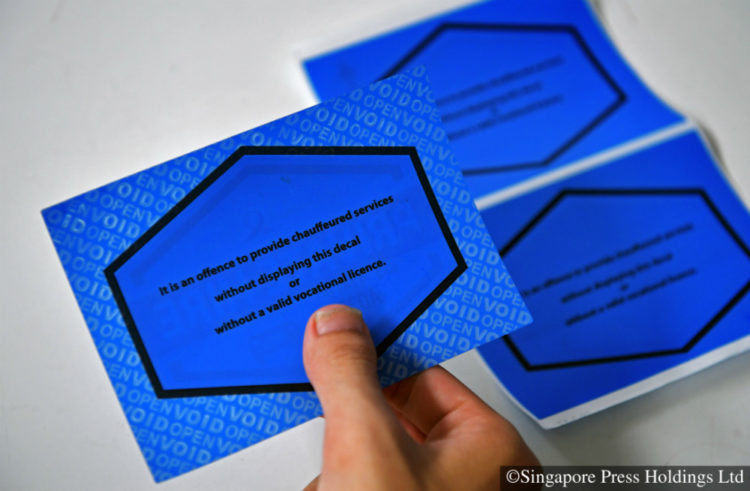 Use of decals by Grab to indicate the Private-Hire Car Driver have applied for their Vocational Licence. The word “void” appears on both sides of the tamper-evident decal once it is peeled off, to prevent it from being reused.

The Land Transport Authority (LTA) said that in July, four drivers were nabbed for operating without the required vocational licence or a concession letter allowing them to pick up fares while they await their licence or vocational course.

Another 23 individuals were found obscuring or altering decals pasted on their vehicles to identify them as private-hire cars, or were caught driving without one, the LTA said yesterday, in response to media queries.

On July 1, laws kicked in requiring all private-hire drivers – such as those driving for the Uber and Grab apps – to obtain a Private Hire Car Driver’s Vocational Licence (PDVL). They have to attend and pass a 10-hour course.

The LTA has given private-hire drivers a grace period of up to one year to pass and obtain the PDVL, provided they sent in their PDVL applications by June 30.

About 42,000 chauffeur-driven private-hire cars have also been affixed with tamper-evident decals – a requirement under the new regulations.

The authority also said that in the first seven months of this year, 526 private-hire cars have been caught parking or stopping at taxi stands.

LTA said that its enforcement officers have been conducting checks on private-hire cars, but also called on the public to report violations.

“Commuters may also report to LTA, should they encounter chauffeur-driven private-hire cars with missing or obscured decals, or drivers providing chauffeured services without a PDVL or concession letter from LTA,” a spokesman said.

For operating a private-hire car without a decal or vocational licence, or for making use of taxi stands, first-time offenders can be fined up to $1000, jailed for up to three months, or both. Repeat offenders may face a fine of up to $2000, or a jail term of up to six months, or both.