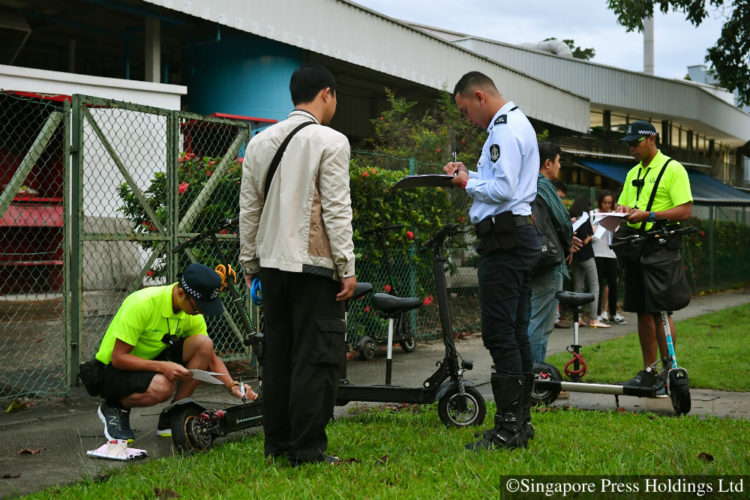 There have been 38 personal mobility device (PMD) users caught riding on the roads this year, up from just 22 over the same period last year, said the Land Transport Authority (LTA) on Monday (Jan 15).

When The Straits Times went on a joint enforcement operation between the LTA and the Traffic Police against errant riders in Loyang Drive on Monday, 11 PMD riders were stopped for riding on the roads and had their devices impounded.

This comes even as stiffer penalties for PMD users caught riding on roads came into effect the same day.

PMD users found riding on expressways will be charged in court. If convicted, they face a maximum penalty of a $2000 fine and a jail term of three months.

The fine was previously $100 for the first offence, $200 for the second offence and $500 for subsequent offences on all roads.

Banners have also been placed on lamp posts at 175 locations across the island to remind PMD users that riding on the roads is an offence.

Last year, an average of 40 PMD users were caught riding on the roads each month.

Transport Minister Khaw Boon Wan revealed in Parliament earlier this month that there were about 110 accidents involving PMDs between January and September last year, more than 70 percent of which occurred on the roads.

To encourage greater awareness of safe riding, LTA will be rolling out a Safe Riding Programme from Feb 1 at places such as schools, community clubs and foreign worker dormitories.

The 90-minute voluntary programme aims to help both cyclists and PMD riders better understand how to ride safely. It will include theory and practical components, and be conducted on a training circuit.

The programme will be mandatory for reckless riders once the Active Mobility Act comes into place, which is expected to happen later this year.

The number of enforcement officers has increased from 24 in June last year to more than 50 currently.

One user who was stopped during Monday’s operations, Mr Murugan Gurusamy, said he was not aware of the stiffer penalties coming into effect that day.

However, he said he appreciated that the regulations were in place for the safety of all road users.

Said the 45-year-old quality inspector: “I guess I will have to take the public bus to work for now.”