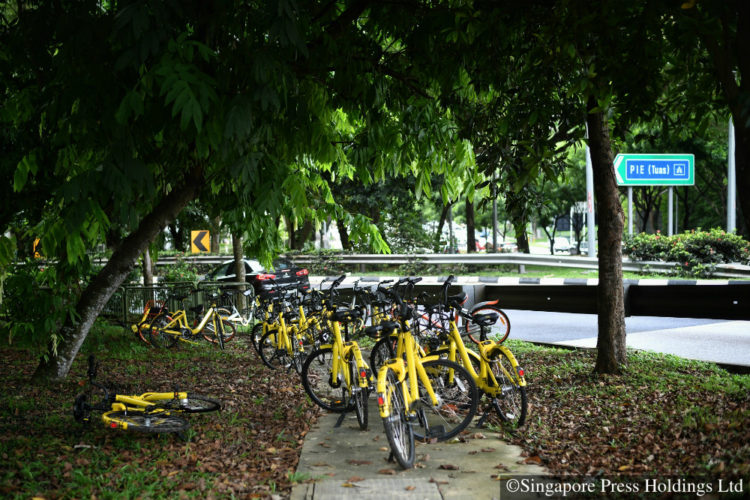 Shared bicycles seen left along Adam Road on Nov 10, by the slip road to the Pan Island Expressway, in the direction of Tuas.

When shared bicycles are parked indiscriminately, they are normally strewn about in a residential estate or in places where many people would pass through.

So, when 20 shared bicycles were seen parked and dumped near a small forested area by the roadside, close to an expressway busy with motor traffic and few pedestrians, some eyebrows were raised.

Earlier this month, The Straits Times found bicycles from three bike-sharing companies – oBike, ofo and Mobike – along Adam Road, by the slip road to the Pan Island Expressway in the direction of Tuas.

There were 14 bicycles from ofo, four from oBike and two from Mobike.

When asked about the matter, an oBike spokesman said that the bicycles could have been left by the roadside because many construction workers cycle from place to place, then leave the bicycles behind when their company vehicles pick them up to return to their dormitories.

“We are aware of this matter and will sometimes arrange to pick these bikes up,” she said. “However, we understand that it is a common recurring problem as this is part of (the workers’) commuting habits.”

Asked about the Adam Road bicycle situation, a Mobike spokesman said that the bicycles were promptly removed by its operations team.

ofo said that its bicycles found along Adam Road were not deployed by the company and it was “in the midst of looking into it”.

Shared bicycles are generally tracked by location indicators such as global positioning system (GPS) technology or Bluetooth systems so they can be located by their companies.

How can such dumping of bicycles be prevented in the future?

The bicycle-sharing firms have different measures, such as improving the technology used to locate bicycles and giving incentives to promote considerate behaviour.

But all of them are rolling out – or have already implemented – measures to deter users from parking the bikes indiscriminately.

BIKE-SHARING FIRMS FACE CHALLENGES IN CURBING ERRANT PARKING
Last month, Mobike, ofo and oBike said they would start using geofencing techniques to combat errant bike-parking by the end of the year, with oBike doing so in the same month.

By creating a virtual boundary that can send out an alert when a bicycle enters or leaves an area, geo-fencing determines if bicycles are parked outside a specified zone.

So far, this technology has resulted in the number of errant bike-users dropping slightly by about 2 percent since geofencing was rolled out, said an oBike spokesman.

Since last month, oBike has detected about 100 users who did not park properly in geofenced areas.

Users who park improperly are given a warning first. However, after a six-month grace period – which began last month – such users will have points deducted and cannot use the oBike service when their points are depleted.

Those who park within designated areas, on the other hand, will have points credited to their accounts, which can be exchanged for rewards such as shopping vouchers.

The company has more than 1100 parking zones islandwide.

Mobike and ofo are also initiating geofencing measures towards the end of the year. ofo’s geofencing initiative started this month, for a three-month trial that ends in January.

An ofo spokesman said that severe incidents of bike abuse account for less than 1 percent of its fleet in Singapore.

Mobike also encourages the public to report concerns regarding its shared bicycles through its smartphone app. The company is also planning to use beacon technology next year to improve the accuracy of geofencing.

Last month, there were about 30,000 bikes between SG bike, Gbikes, oBike, ofo and Mobike.

In the first seven months of the year, the Land Transport Authority impounded 278 bikes for indiscriminate parking.

Said National University of Singapore associate professor of computer science Roger Zimmermann, who is familiar with geofencing matters: “At best, current GPS technology has an accuracy of about 10m. In a location like Singapore with tall buildings and weather conditions such as humidity and rain, GPS error can also increase.”

He said that it is not easy to compute the information of many bikes and numerous parking zones efficiently. He suggested that the bike companies could have a ranked leaderboard of top users based on their points, not unlike in games, so users care about the point system.

Mr Sitoh Yih Pin, chairman of the Government Parliamentary Committee for Transport, added: “I do hope that at the end of the day, suitable measures can be implemented so that responsible users of these bikes can enjoy the benefits of bike sharing without causing inconvenience to others.”