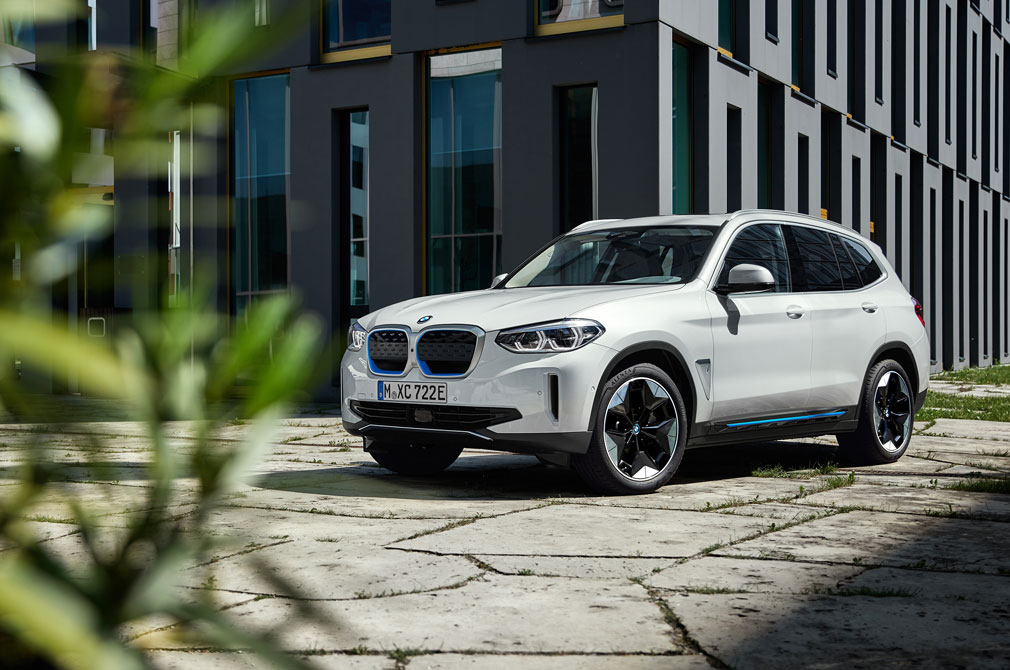 The BMW iX3 is the German carmaker’s first all-electric SUV, and it will be made in Shenyang, China.

Based around the X3, the newly announced BMW iX3 is the first pure electric Sports Activity Vehicle in the brand’s lineup.

The BMW iX3 and its all-electric nature is highlighted by a few aesthetic changes, which include a new largely enclosed kidney grille and front apron. 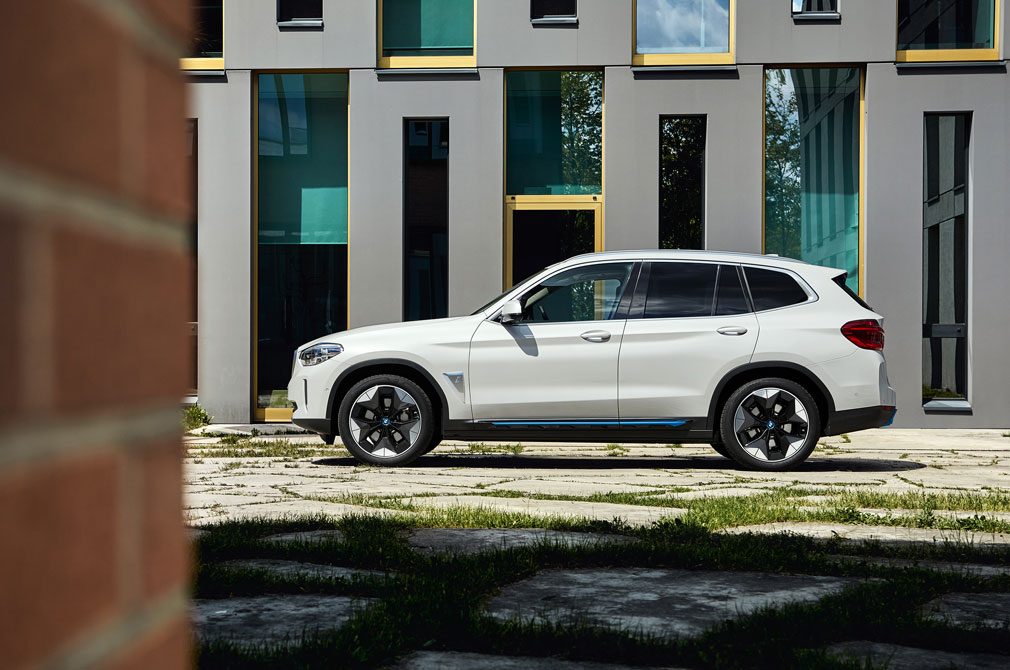 The 19-inch light-alloy wheels cut down on wind turbulence along the flanks of the car, contributing to its 0.29 drag coefficient.

These changes combine with precisely sculpted panelling and air deflectors on the car’s underbody. They contribute to the iX3’s claimed 0.29 drag coefficient.

At the rear, blue inlays in the rear diffuser bring emphasis to the iX3’s exhaust-free drivetrain. 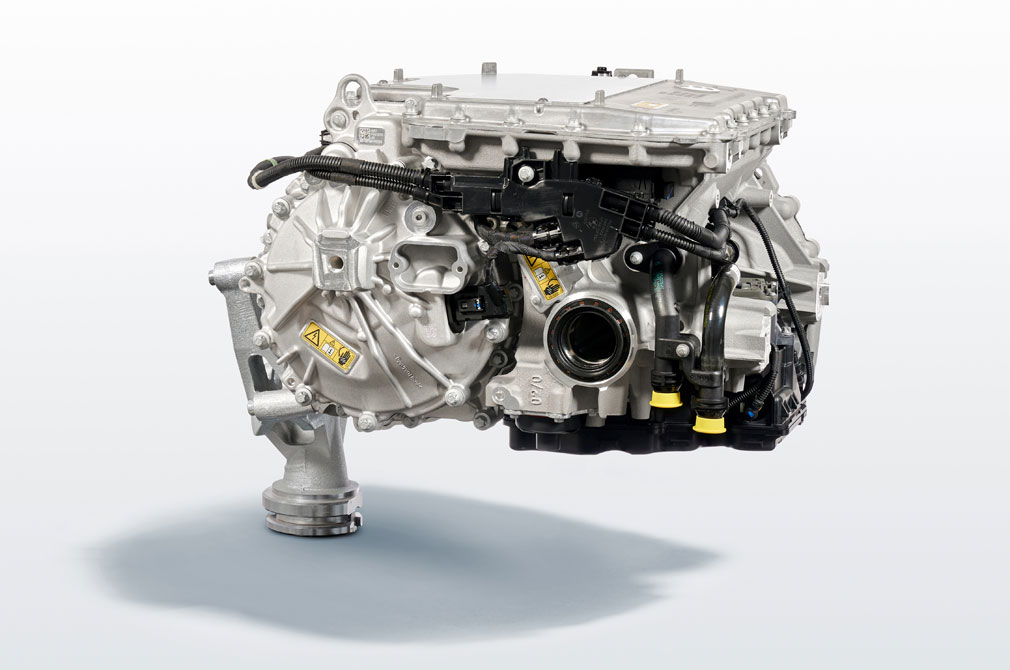 BMW claims this has brought about a 30% increase in energy density compared to the eDrive technology featured in existing electrified models.

The electric motor in the BMW iX3 develops 282bhp and 400Nm of peak torque from rest. It is the most powerful eDrive system ever fitted to an electrified model from BMW.

The use of a current-excited synchronous motor also means the excitation of the rotor is not induced by fixed permanent magnets, but the feed-in of electric power.

This allows BMW to avoid the use of rare earth metals in the manufacture of the electric motor, ensuring long-term material sustainability for BMW. 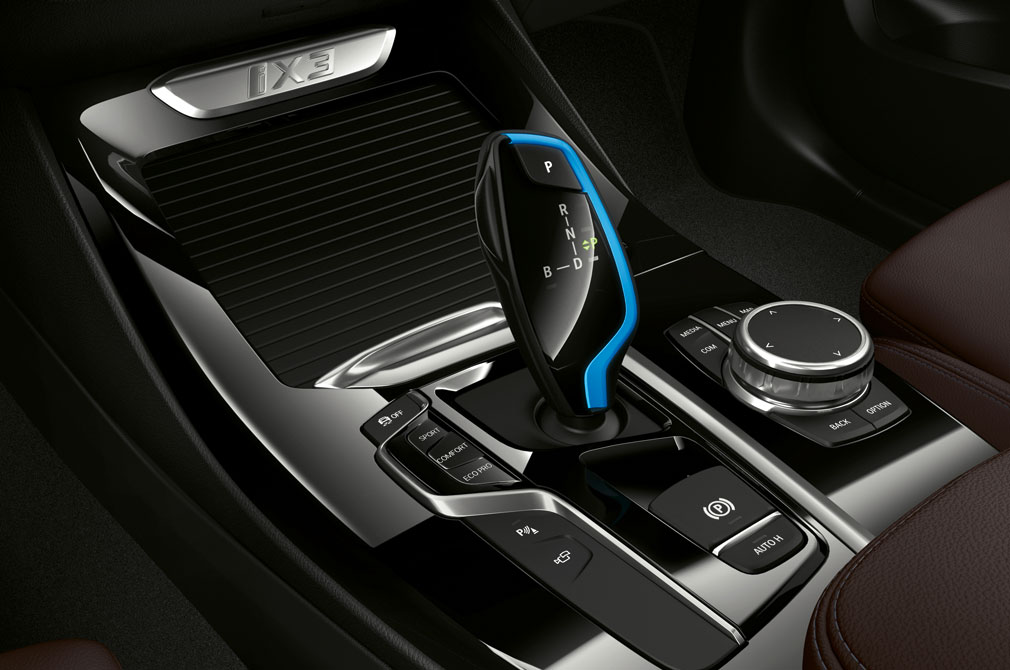 An 80kWh battery, fitted in the vehicle floor, enables a range of up to 459km on the Worldwide Harmonised Light Vehicle Test Procedure (WLTP) cycle.

This gives the new BMW iX3 a zero to 100km/h sprint time of 6.8 seconds, putting it in the same territory as the conventionally powered BMW X3 xDrive30i. The BMW iX3 is electronically limited to 180km/h.

The Combined Charging Unit used in the BMW iX3 enables a high flexibility when it comes to plugging the car into charging stations of various types. BMW quotes a charging time from 0% state-of-charge to 100% in 7.5 hours for a 11kW charger. 80kWh battery is mounted in the vehicle floor to minimise cabin space intrusion.

A direct current fast-charging station meanwhile will replenish the battery from zero to 80% of its full capacity in 34 minutes. A maximum charging speed of 150kW is possible with the iX3.

The front passenger and the three occupants in the rear will enjoy almost exactly the same levels of space as in conventionally powered BMW X3 variants. There are no major differences either in terms of luggage compartment flexibility with the iX3.

The BMW iX3 also debuts BMW’s “IconicSounds Electric“. The new emits via speakers in the car specially crafted sounds engineered from award-winning composer Hans Zimmer at both startup and when the accelerator pedal is pressed.

The sounds are said to add extra emotional depth to the driving experience of the car.

The market launch of the new BMW iX3 will begin later in 2020, when sales get underway in China.

Don’t have convenient access to a charging port? Thankfully, the BMW X3 xDrive30e is already here in Singapore!
Or read our review of the petrol-powered BMW X3 xDrive30i here.