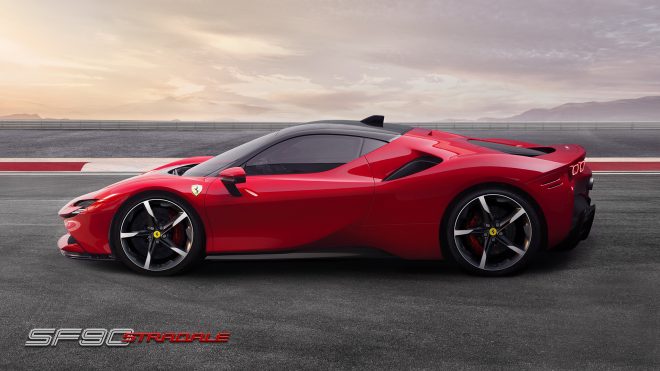 This supercar is the spiritual successor to Ferrari’s first hybrid supercar, 2013’s LaFerrari.

Why SF90 as its name? The 90 refers to the 90th anniversary of the founding of Scuderia Ferrari (SF).

The name encapsulates the “true significance” of all the company’s achievements in performance, Ferrari said. 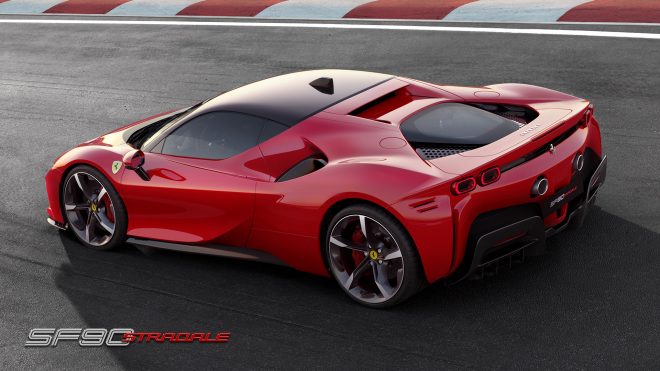 It now puts out 769hp, the highest power output of any eight-cylinder in Ferrari’s history.

The remaining 217hp is produced by three electric motors.

One, known as the MGUK (Motor Generator Unit, Kinetic) is located at the rear between the engine and the new eight-speed dual-clutch transmission on the rear axle.

The remaining two are on the front axle, giving the SF90 AWD capability.

That’s also by design: giving the car four driven wheels helps it put down all that incredible power to the road, and helps it stick there too.

“Ferrari’s engineers were able to further broaden the spectrum of dynamic controls by introducing the full-electric front axle, known as the RAC-e (electronic cornering set-upregulator),” the company said.

As well as exclusively providing propulsion in electric drive, the two front motors independently control the torque delivered to the two wheels.

An innovative shut-off Gurney flap, is fitted to the rear, a patented active system which regulates the airflow over the upper body, reducing drag at high speeds with low lateral dynamics loads and increasing downforce in corners, under braking and direction changes.

Meanwhile, the new eight-speed dual-clutch gearbox is claimed to offer a “significant” reduction in fuel economy: 8 percent less in the WLTP cycle, and a miniscule 1 percent efficiency improvement on track.

Despite more reinforcement, the new gearbox on the SF90 is actually 7kg lighter, which rises to 10kg if you factor in the removal of the reverse gear which is now the job of the front electric motors.

Speaking of those electric motors, all three are fed by a “high-performance” lithium-ion battery that enables the SF90 to hit a 25km electric-only range and a top speed of 135km/h in that mode. 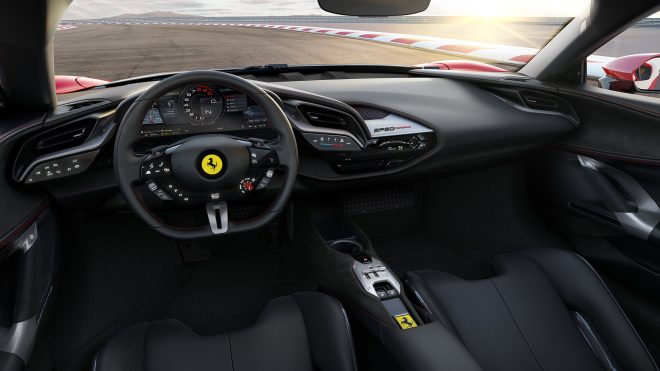 Interior of the SF90

Inside is no less impressive.

The designers created a wraparound, aeronautically-inspired cockpit with an emphasis on instruments.

In a first for the brand, the central instrument cluster comprises a single 16″ digital HD screen, which curves towards the driver to make it easier to read and to emphasise the F1-style wraparound cockpit effect. 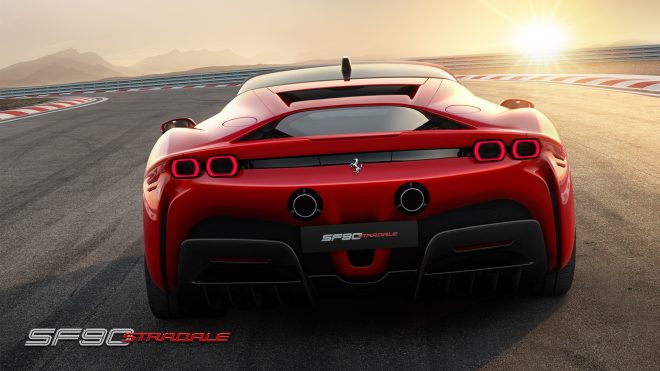 Ferrari said that’s part of its “hands-on-the-wheel” philosophy for every Ferrari F1 car and its subsequent gradual transfer to its road-going sports cars.

The SF90 Stradale’s steering wheel also introduces a series of touch commands that allows the driver to control virtually every aspect of the car without ever taking their hands off the wheel.

No word on when the SF90 will make it to local shores, but we’ll definitely update you when we know.