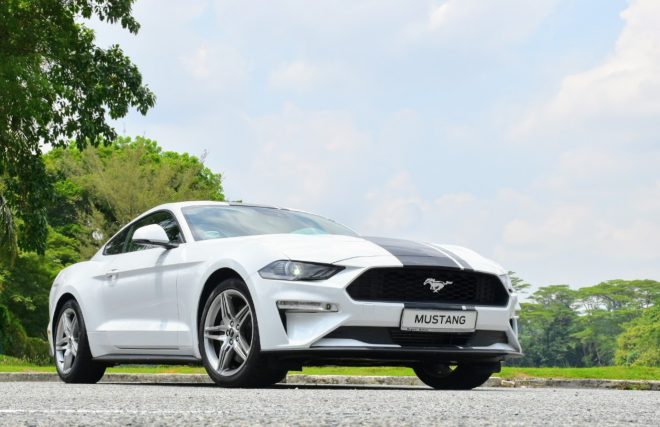 There’s just something irresistible about a Ford Mustang.

With its long-hood-short-tail pony car styling, the Mustang cuts a sporty and arresting figure that looks nothing else on the road.

As more cars adopt sleeker profiles, the Mustang is unapologetic about its standout, all-American styling.

Its striking retro-modern looks turn heads, and even people who’ve never seen a Mustang recognise it as something special, so unique its countenance.

Granted, our test car didn’t have the more suitable growly V8, but the Ecoboost version here still has plenty of presence.

It’s a car that doesn’t take itself too seriously, which explains its legions of fans the world over. 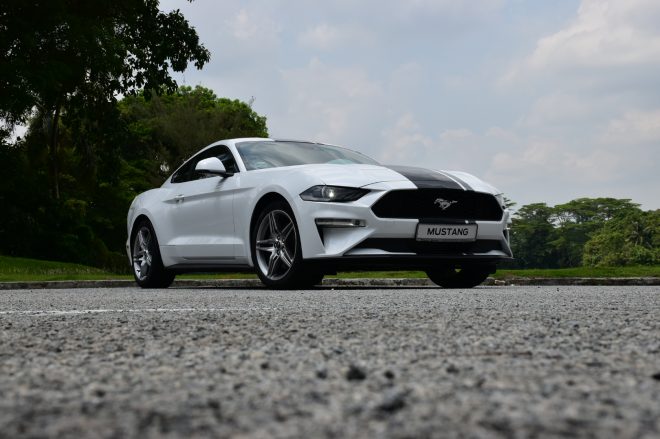 The sixth-generation Mustang’s facelift has brought with it refreshes like a restyled front end and a digital cockpit display.

It also gets a 10-speed gearbox, up from the old 6-speeder, and has lost about 32kg.

Oddly, the same 2.3-litre Ecoboost engine now gets 306hp, which is about 7hp less than the 313hp before.

That hasn’t dented its 0-100km/h timing or top speed, remaining at 5.5 seconds and 233km/h respectively.

However, fuel consumption has dipped slightly to 10km/litre from 10.2km/litre. 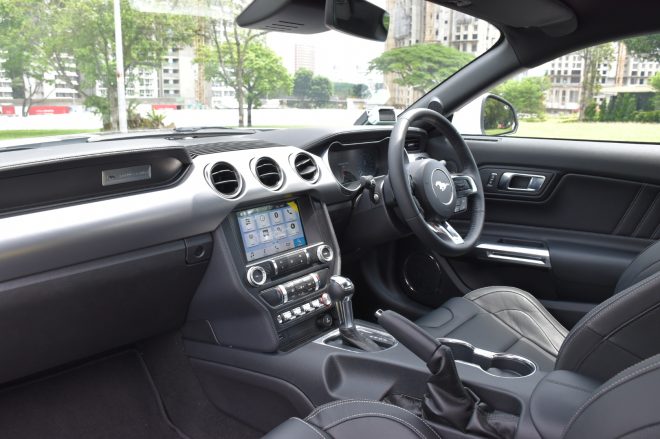 The plastic interior of a Mustang looks like a Tupperware party, but at least everything is nice and tactile. The position of the handbrake is a major pain point, but perhaps not so much to those in love with a Mustang.

Let’s get the bad stuff out of the way first.

If Audi’s interiors are a stylish Sentosa penthouse, the Mustang’s cabin is a sparsely-furnished three-room flat.

The endless sea of plastic doesn’t help matters, and there are some ergonomic elephants in the small cabin too.

The biggest issue of all is the handbrake, which is located on the passenger side (a holdover from the Mustang’s LHD origins). It makes it hard to fish out when you have to pull it.

You have to contort your left hand to pull it up or alternatively, stick your fingers between the seat cushion and handle and pull.

That gets real interesting real fast if you have a passenger. 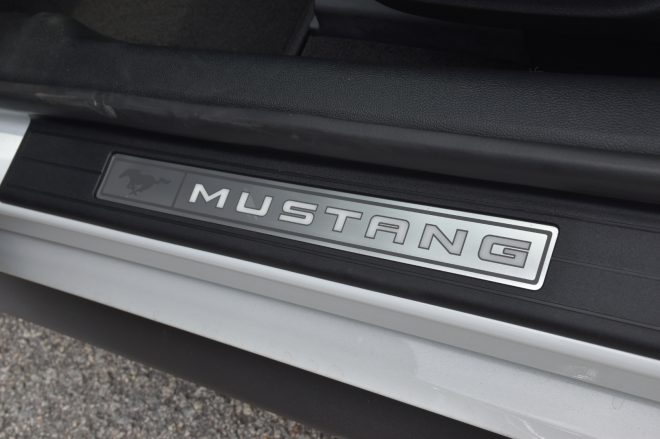 Ford could have spent a bit more to move it to the right, seeing as this Mustang is an international model, but I guess it’s a small price to pay for those who really want a Mustang.

The backseat is also really meant for either really small children or tiny adults.

Having said that, the cockpit does get nice aluminium-effect trim and the chunky toggle switches are refreshingly old-school from the clinical screens invading modern cabins.

The 8-inch Ford Sync 3 infotainment screen has clear graphics and surprisingly easy navigation. If you don’t want to use it, it supports both Apple CarPlay and Android Auto.

I do love the retro styling that storied cars like the Mustang inevitably retain, and even though the interior isn’t the last word in refinement, it’s still quite charming. 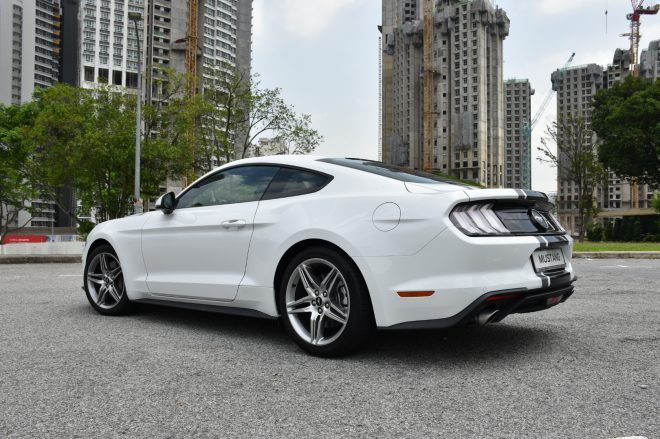 Side profile of the Ford Mustang.

With its modern suspension setup of front MacPherson struts and rear independent multi-link, the Mustang rides incredibly well for a car in its class.

Small road imperfections are breathed over with fleeting grace, and larger bumps like speed humps are despatched with minimal body shimmy.

It’s a comfortable ride which follows the remit of a pony car, that is, to be a great long-distance cruiser.

Sadly, that other anecdote about pony cars – not going around corners well – is also quite evident.

The Mustang’s steering is somewhat woolly and its steering stops are mushy.

The car also takes its time to respond to helm inputs, evidence of its unhurried and carefree nature.

But take a corner at speed and the Mustang’s Pirelli P Zeros dig in like koalas on trees, while body roll is kept impressively in check.

The 10-speed gearbox is also smooth, shifting imperceptibly but does take a while to drop down the gears in an amber-light-or-gun-it scenario.

Power from the 2.3-litre Ecoboost is enough for local roads, but it’s in no hurry to deliver its 300 horses. In fact, you could almost hear the individual cylinders firing.

It adds up to a car which is more cruiser than bruiser but knows how to have fun when called upon to deliver.

What do we think of the Ford Mustang? 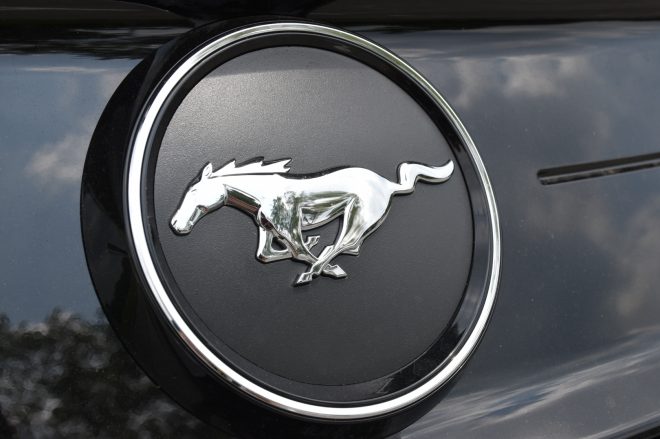 Priced from $246,888 with COE, the Mustang here is emphatically no blue-collar hero.

You’ll have to want this niche American muscle car over the cheaper and better made (but less powerful) BMW 420i, or even the more practical Audi S3 Sportback.

But in truth, none of the cars in its price range offer the same levels of horsepower nor charm.

The Mustang may not have the same build quality or resale value as the more established competition, but those are boring things to worry about when you’re faced with this all-American hero.

And like all heroes, the Mustang wins your heart at the end of the day.