Ford Ranger 3.2 review: A working-class Rangey for the rest of us | Torque
Loading posts...
0 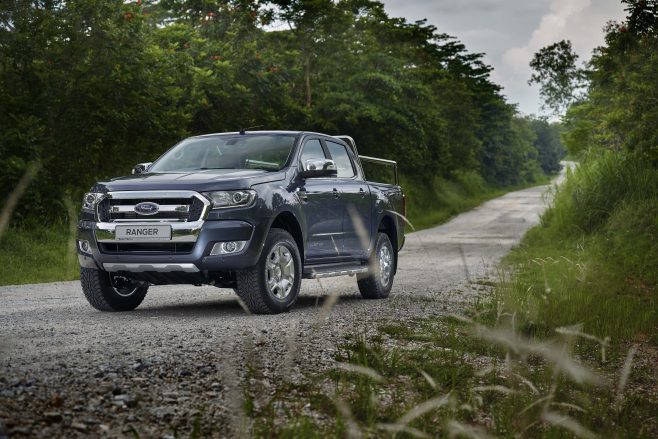 It’s big and brash and made by Ford.

And no, it’s not the Mustang.

It’s the Ford Ranger, a hulking pickup truck that’s got road presence unlike anything else on our roads.

In the wide open plains of the US midwest, the pickup truck (or “ute” in Australia) is coveted for its ability to seat five in comfort while effortlessly hauling bales of hay or horse manure.

But owning this in Singapore makes about as much sense as wearing ripped jeans to a black-tie wedding.

But to me, a closet redneck, a truck has a blue-collar appeal, similar to the love people have for muscle cars – despite them having a reputation for being crude.

It’s (literally) more power to the people, sticking it to the rich who drive around in their swanky luxo-barges. See, I can have space and pace too!

That said, you’ll struggle to drive this anywhere in tiny Singapore.

How big is the Ford Ranger?

It’s so large that it takes up most of the space in Ford’s showroom. And considering authorised dealer Regent Motors now only sells the Mustang and the Ranger, it’s a really big truck, especially in our local context.

By American standards, the Ranger is considered “mid-size”, which is a bit like calling the Titanic a wooden rowboat.

The Ranger stands 1880mm tall, a good 45mm taller than a Range Rover (one of the largest cars on the road) and is longer at 5362mm too, but its narrower than a Rangey by about 213mm.

That mass is mostly taken up by the rear cargo bed, the raison d’etre of buying a truck.

At 1180 litres, save on your Ikea deliveries by packing all your flat-pack furniture in it. 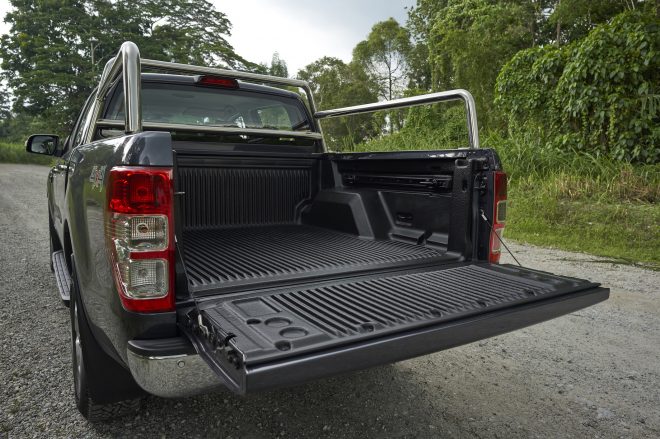 The massive 1180-litre cargo bed definitely has space for all your Ikea shopping needs.

By comparison, the Skoda Superb, a car well known for its boot space, has 625 litres.

The cargo bed is large and plain, but it does get a plastic bed liner and a tailgate which you can lower and sit on to watch the sunset on your farm…or void deck, in our case.

There are even cutouts in the tailgate for your cup! True to its working-class roots, the unvarnished practicality continues inside.

It’s the usual Ford stuff with lots of shiny silver and black plastic bits, but with a reassuring heft to every touch point.

Even the gearlever, reduced to a small nub in modern cars, is a satisfying no-nonsense tool which you grab and put the Ranger into gear with. 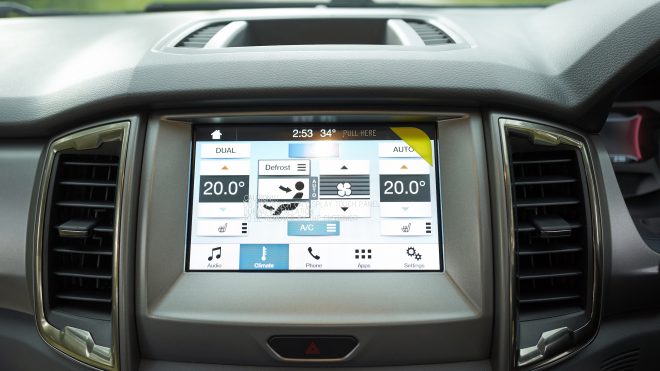 Its Ford Sync 3 infotainment also lets you hook up via Bluetooth and USB, as well as Apple Carplay and Android Auto.

Farmers and workmen, blast your country and western loud and proud. Or in our local context, your Hokkien tunes. 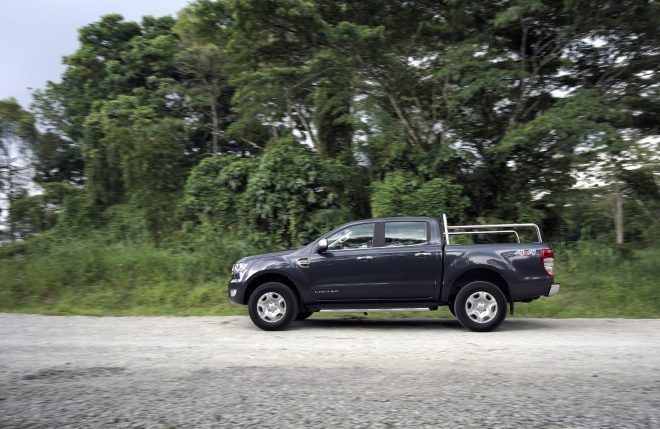 With so much power from the Duratorq turbodiesel, it’s a hoot on gravel.

Knobbly 65-section tyres don’t normally equate to a good ride, but the Ford makes them dance to its own tune.

Even on gravel along the dirt tracks of Jalan Bahtera, the Ranger was uncannily comfortable on its front double wishbones and rear leaf springs.

Large potholes are soaked up well and speed bumps can be taken at a rapid clip without unsettling the Ranger.

You’ll notice the large empty cargo bed wallowing around at the back, though.

Powered by Ford’s 3.2-litre, 5-cylinder Duratorq engine, the Ranger’s got some kick too. 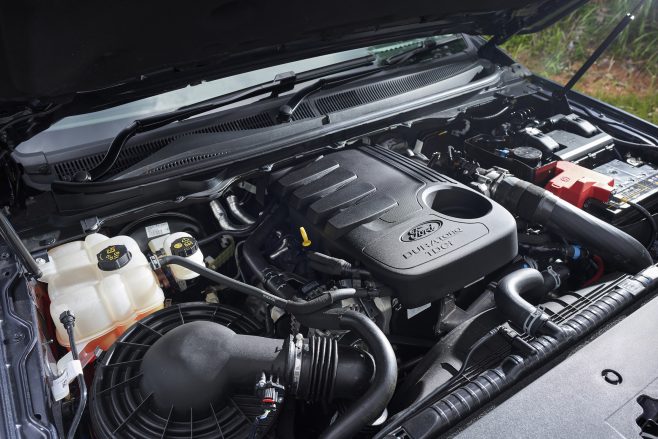 All that power means sliding on gravel has never been easier, and in rear-wheel-drive the Ranger is one playful truck in the muck.

You can seamlessly switch between 2WD and 4WD High and Low modes on the go just by turning a knob on the centre console.

Make no mistake. With the Ford Ranger’s size, you’ll struggle to fit this in any HDB carpark.

With a speed limiter blaring at you every time you hit 70km/h, it’s not quick either.

But sensibilities like this take a backseat to the extremely likeable nature of go-anywhere, do-anything vehicles like this. How else do you explain the masses of Land Rover Defenders plying our roads?

The Ranger actually even has a bonus on those Defenders as it can be privately registered.

For people who are diehard offroaders, the Ranger is a good fit once that G-plated Landie of yours expires. I think you’ll find it a massive step up.

And for closet rednecks like me, well, consider me sold.