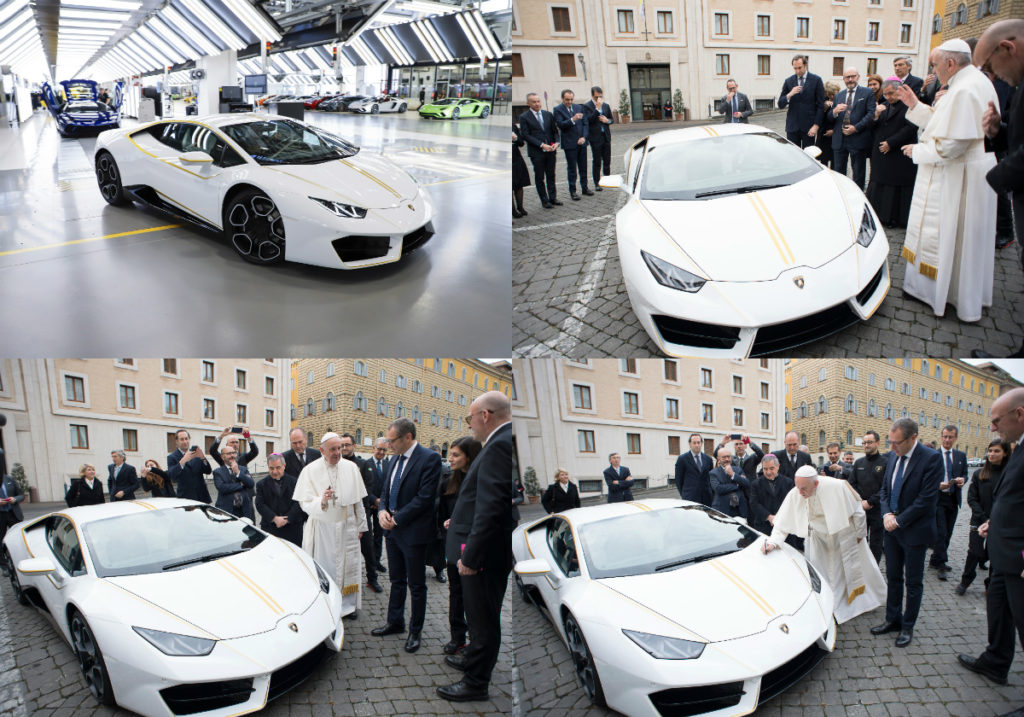 Automobili Lamborghini unveiled a one-of-a-kind version of the Huracan RWD to be auctioned for charity as a donation to His Holiness Pope Francis.

The Lamborghini Huracan RWD donated to the Pope is created in homage to the Vatican, also thanks to the idea promoted by the agency Riptide, Milan. The special edition, realised by Lamborghini’s customisation department Ad Personam, pays tribute to the colours of the flag of Vatican City, painted in Bianco Monocerus with Giallo Tiberino decorated alongside the Huracan’s silhouette.

The ceremony of the vehicle presentation was held in the Vatican in the presence of Pope Francis and Stefano Domenicali, COE of Automobili Lamborghini. They were joined by members of the company’s management board and two factory technicians who built the special car.

The car will be auctioned by RM Sotheby’s on 12 May 2018 with all proceeds donated to the Holy Father who will allocate them accordingly to the reconstruction of Iraq’s Nineveh Plain under the patronage of the Pontifical Foundation “Aiuto alla Chiesa che Soffre” (Aid to the Church in Need); the Pope John XXIII Community, which is dedicated to helping women who are victims of trafficking and other abuses on the 10th anniversary of the passing of Father Oreste Benzi and the 50th anniversary in 2018 of the founding of the Community, “Progetto Casa Papa Francesco” (Pope Francis House Project); and two Italian associations that carry out activities mainly in Africa, GICAM and “Amici per il Centrafrica” (Friends for Central Africa), which have worked for many years in the region on initiatives dedicated primarily to aiding women and children in need.

Read about Lamborghini’s delivery of a Huracan police car to the Italian Highway Patrol.