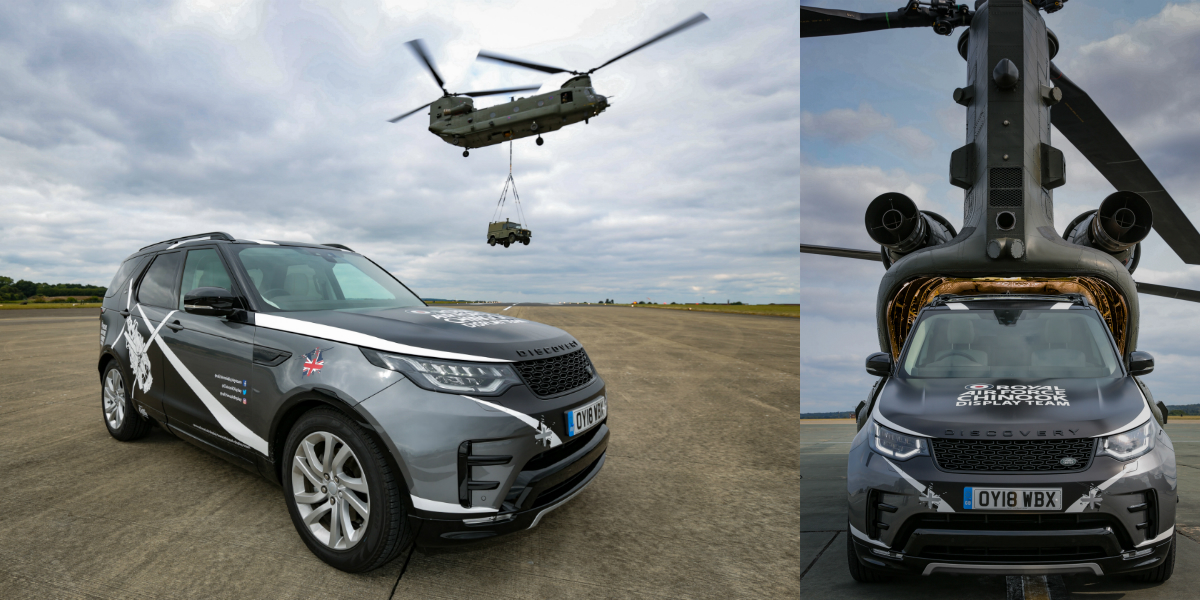 Land Rover will be assisting the famous RAF (Royal Air Force) Chinook Display Team with ground support throughout the remainder of 2018 and 2019. The new partnership comes during a historic year for both parties, with Land Rover celebrating its 70th anniversary and the RAF celebrating its 100th.

Land Rover will provide the team with a new Discovery, complete with bespoke Chinook Display Team wrap. The car will provide ground support during off-season activities in 2018 and then for the full display schedule in 2019. The capable Discovery will be able to carry seven crew members at one time, supporting both the air and ground team throughout the partnership.

The Chinook helicopter and the Land Rover Discovery have more in common than one might think – both have been carefully engineered to carry people and heavy equipment. But while the Discovery can carry seven crew members in comfort and tow an impressive 3.5 tonnes, the Chinook is able to carry up to 55 troops or up to 10 tonnes.

This is just the latest partnership making full use of the Discovery’s class-leading versatility and capability. In recent years, it has assisted in ground operations for Scotland’s Charity Air Ambulance and helped the Cleveland Mountain Rescue Team navigate tricky terrain to save lives. First introduced in 1989, the Land Rover Discovery is gearing up for its 30th anniversary next year and has already sold more than 1.3 million units throughout the world.

A spokesperson for the RAF Chinook Display Team said: “The addition of this vehicle to the team has only happened as a result of the kind support we have received and will enable a huge amount of flexibility on the display circuit. With a significant ground footprint of engineers and aircrew, not to mention a growing inventory of equipment and products which is taken to public shows, the ability to move flexibility whilst flying the flag for the United Kingdom is one the team values greatly.”