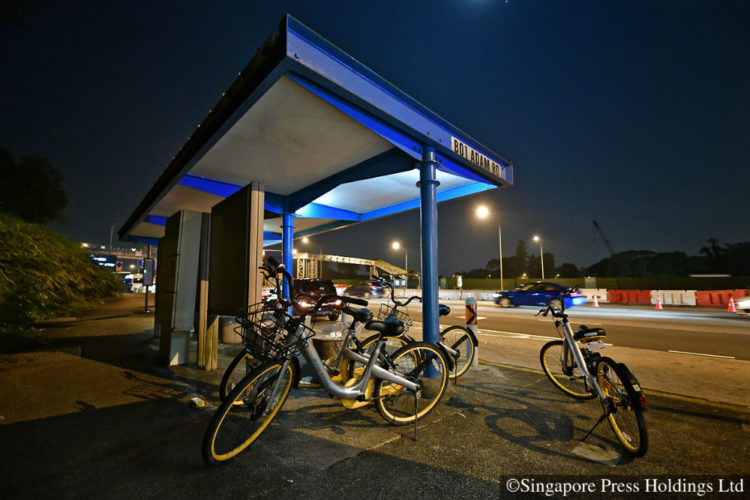 Bicycles from oBike parked carelessly at a bus stop in Adam Road.

While people have abused shared bicycles, including throwing them from a Housing Board block and dumping them in canals, they are also becoming a public nuisance.

Since last month, Land Transport Authority (LTA) officers have issued removal notices on about 600 of these two-wheelers which were parked indiscriminately.

Of these, 135 have been impounded by the authority because the bike-share operators failed to remove them within the grace period of half a day, the LTA shared with The Sunday Times.

Bicycles from all three bike-share firms – ofo, oBike and MoBike – have been impounded, though LTA did not provide a breakdown.

The authority said that despite efforts to ramp up bicycle parking spaces, along with engagements with bike-share operators to manage the issue, the problem has persisted.

The authority said: “There continues to be bicycles that are parked indiscriminately, which causes obstruction or inconvenience to the public, such as users of wheelchairs and other personal mobility aids.”

The common problems – going by the experiences of two LTA officers The Sunday Times interviewed recently – are bicycles left on footpaths and at bus stops.

“Some of the bicycles are in the middle of the footway… at bus stops, in the way of people waiting to alight (from the bus),” said Mr Asrul Fahmi Rashid, an LTA active mobility enforcement officer.

The two-wheelers, which are unlocked using a mobile app and do not have to be returned to fixed docking stations, have also been strewn on footpaths and at the exits of private condominium estates, the officers said.

Of the 135 impounded bicycles, 67 have been collected by the companies, while the others, which were impounded more recently, are pending collection.

The Sunday Times understands that an administrative fee of about $100 is levied for each bicycle retrieved. It is also believed that the LTA is considering imposing a fine on top of this fee in the future.

The LTA said that by the end of this month, four new bicycle parking zones near Joo Koon, Bukit Gombak, Kembangan and Yew Tee MRT stations will be created, bringing the total number to 34 islandwide.

The zones, demarcated by bright yellow lines, will add to the more than 1400 spaces created since March in places identified as high demand areas for bike parking.

The authority said it encourages all cyclists to park within the designated parking areas, and will take action against those who park their bicycles in a manner that severely obstructs or inconveniences others.

All three bike-sharing firms said they supported LTA’s new zones, and will add the locations to their apps’ maps so users can find them.

When The Sunday Times visited several parking zones around midday last Friday, cyclists interviewed said they supported the zones but said accessibility can be an issue.

However, at Bishan MRT station, both rental and normal bicycles were crowded into the older parking areas, while two lone oBike bicycles stood in LTA’s parking zone.

Retiree Paul Teo, who was cycling on his own bicycle, said he was unaware of the new parking zone, despite being someone who cycles “almost everywhere”. “There were no announcements, no signage,” said the 60-year-old.

He motioned towards the old parking area crammed with two-wheelers. “There are a number of empty spaces, but it’s not possible to park out there… You have to shift the other bikes around.”

The Sunday Times understands that materials to publicise the parking zones will be disseminated on various platforms and physical locations.

At the grassroots level, the LTA is working with town councils to increase the parking spaces at void decks. The town councils are also working to align their by-laws with the LTA’s regulatory framework and penalties in dealing with owners of illegally parked bicycles.

Dr Teo Ho Pin, coordinating chairman of the 15 town councils run by the People’s Action Party, said the alignment “should take about four to six months” to be completed.

A Tampines Town Council spokesman said it has received an “isolated number” of reports of indiscriminate parking, but declined to say how many.

“We noticed that the reports of bad parking have actually dwindled, and we believe the publicity on social media has helped raise awareness of good bike-sharing etiquette.” 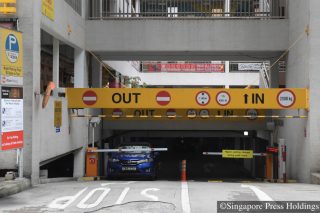