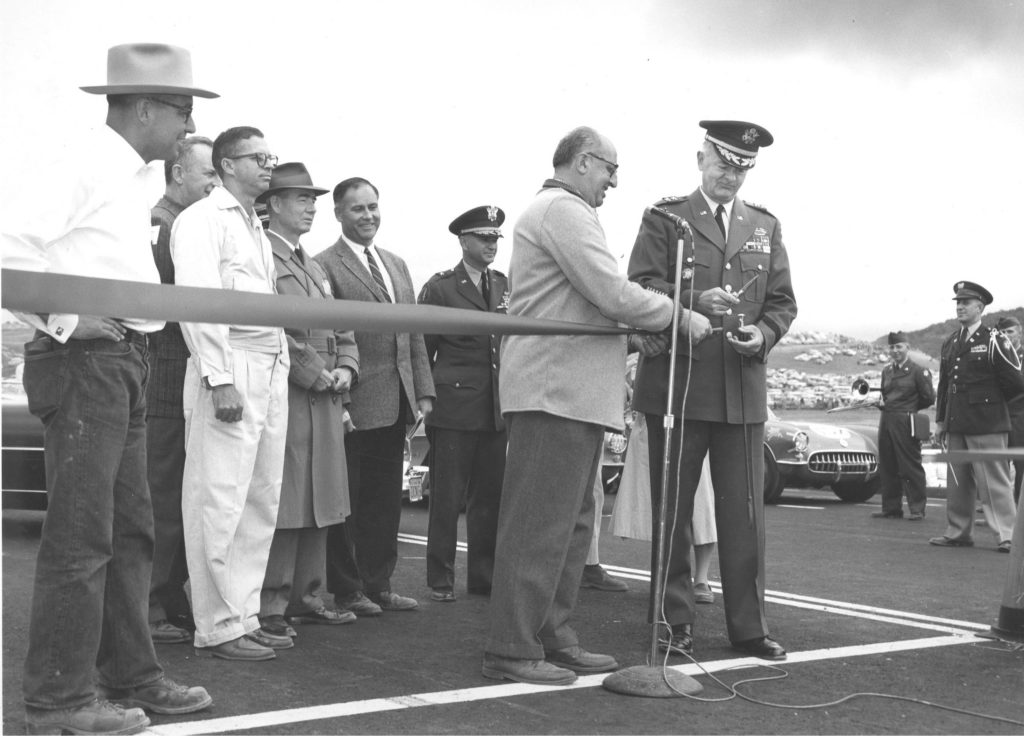 On 9 November 1957, the ribbon was cut at Laguna Seca Raceway at the start of its inaugural event, the eighth annual Pebble Beach Road Races. Sixty years later, the iconic road course celebrates its diamond anniversary.

The inaugural event was a continuation of the racing through the forest at nearby Pebble Beach that began in 1950 and ended six years later. After the Pebble Beach Road Races took a tragic turn, the need for a safer course was deemed paramount. The popularity of the races and the financial impact to the community had impressed military authorities at Fort Ord.

Enter a group of civic-minded businessmen who were willing to donate their time and money to keep sports car racing alive in Monterey. In mid-1957, the Sports Car Racing Association of the Monterey Peninsula (SCRAMP) was formed and began working with military officers. SCRAMP and the Monterey Chamber of Commerce negotiated a five-year deal and paid US$3000 to the Army for use of the land, and on 7 August 1957 a lease was signed.

SCRAMP began fundraising and collected US$125,000 for track construction that began the first week of September. Amazingly, just 60 days after starting, the track was completed in time to host the first race in November where 100 entries were received and 35,000 spectators arrived.

In the 60 years that followed, the track has undergone changes and improvements to expand to an 11-turn, 2.238-mile (3.6km) circuit best known for its famous Corkscrew – a hard-left, hard-right turn with a five-and-a-half storey drop in elevation. It has hosted Can Am, Trans Am, Indy Car, and 500cc Motorcycle Grands Prix during the height of their respective popularities.

Check out the giant Mazda 787B mural at Laguna Seca.

Check out Fastrackcity Iskandar, the premier motorsports city in Johor.