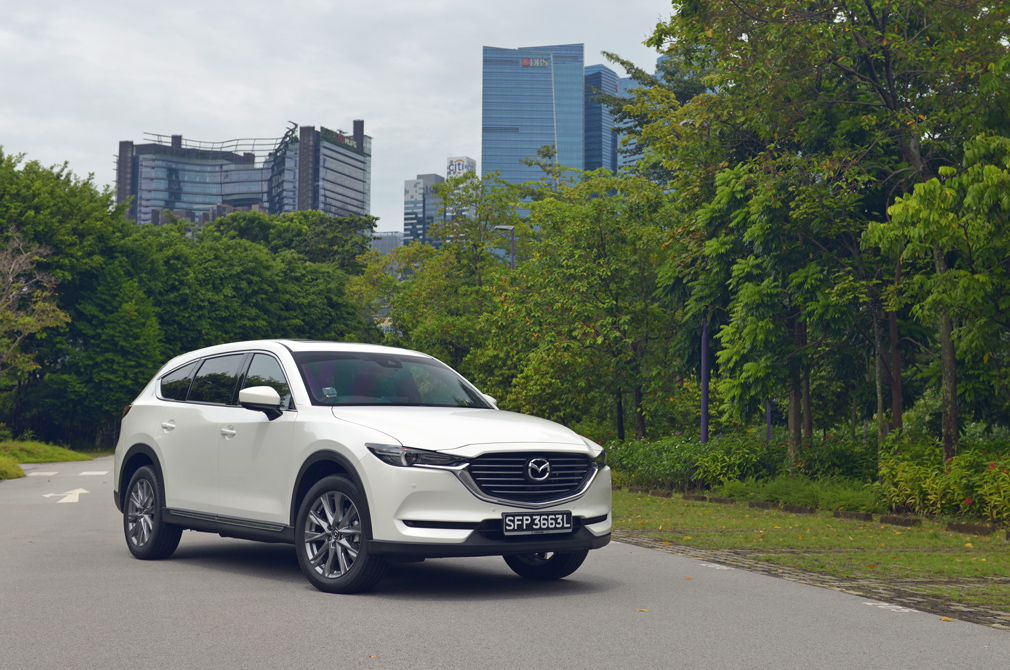 Being the middle child is never easy.

According to stereotypes, the middle child is often the “forgotten” one because parents typically fuss over the eldest child and baby the youngest one.

Meanwhile, the middle child gets overlooked – especially if he or she doesn’t cause any headaches.

That’s exactly what could have happened to the Mazda CX-8 – the “middle child” in the brand’s lineup of large SUVs.

On paper, one wonders why there’s a need for a CX-8. There’s a CX-5 for buyers seeking a five-seater SUV, and a CX-9 for buyers who need a seven-seater.

What does the CX-8 bring to the table? 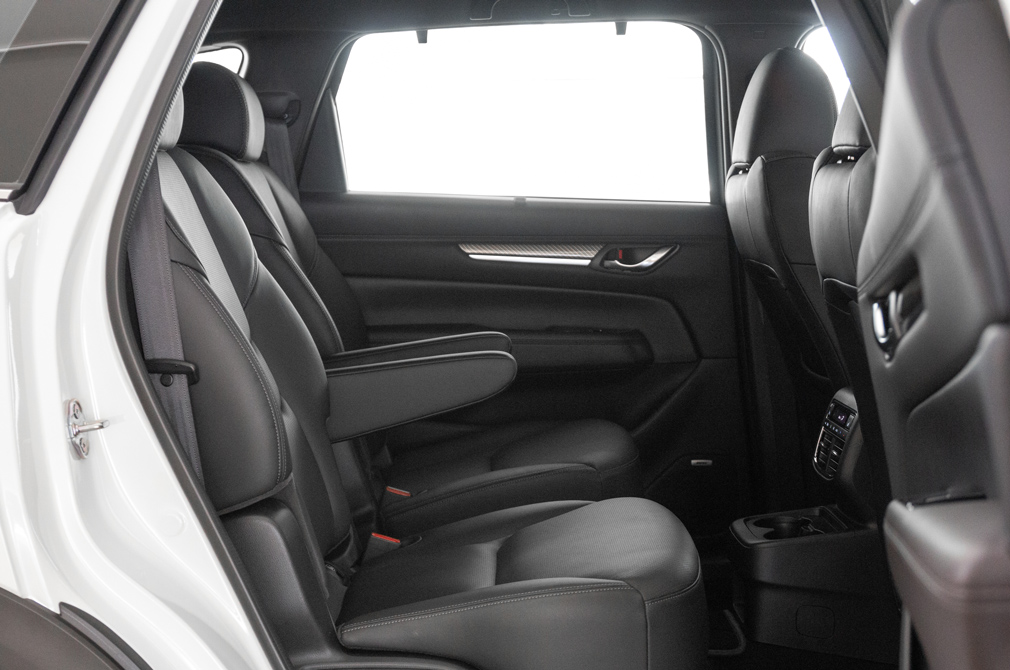 The Mazda CX-8 distinguishes itself by offering buyers a six- or seven-seater layout, with the former being the subject of this review.

At first, the thought of a six-seater SUV seems absurd because it’s neither here nor there. Well, that is until you open the CX-8’s doors. The 2+2+2 arrangement has a “business class” feel to it – especially with regard to the latter two rows.

Instead of having a three-seater bench in the second row, you have two individual seats. The sizeable space between them creates a more refined, lounge-like feel.

You don’t have to rub shoulders or elbows with your seat mate. And chatting with the two occupants behind you is easier, too. 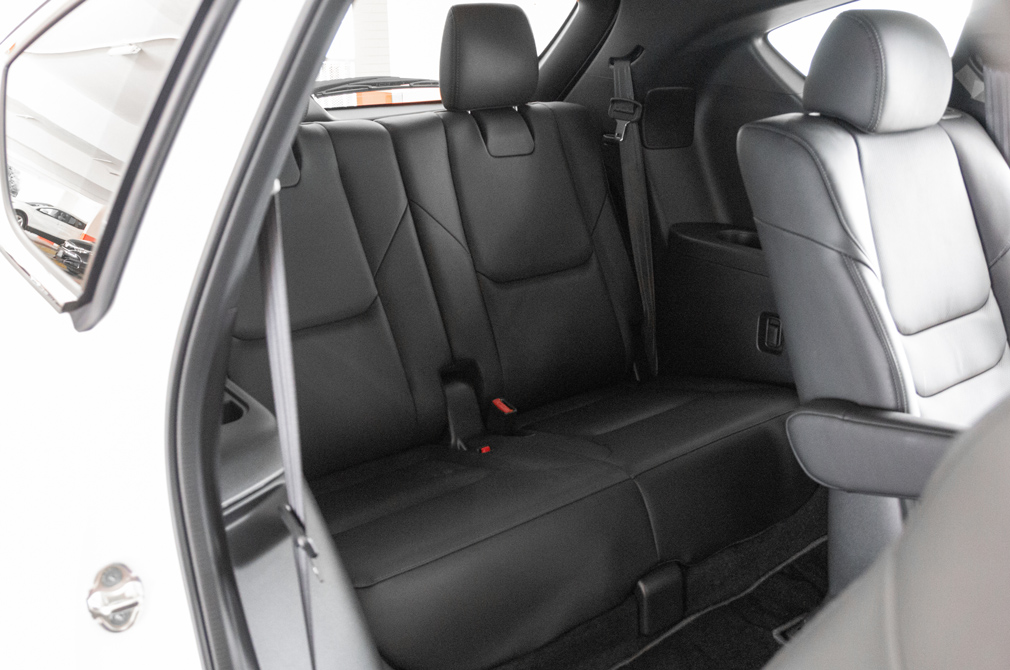 Speaking of which, access to the last row of seats is easier in the six-seater CX-8 than in the seven-seater variant. And thanks to the gap between the second-row chairs, cooler air can actually reach the third-row.

Obviously, having air-con vents in the last row is the best solution. But since there are none, at least there’s this workaround.

Third-row seats in SUVs are usually abysmal when it comes to passenger space. But in the CX-8 six-seater, these can accommodate occupants up to 1.8m tall.

Apart from the tall backrests, they also have regular-size headrests, which means added comfort for passengers. 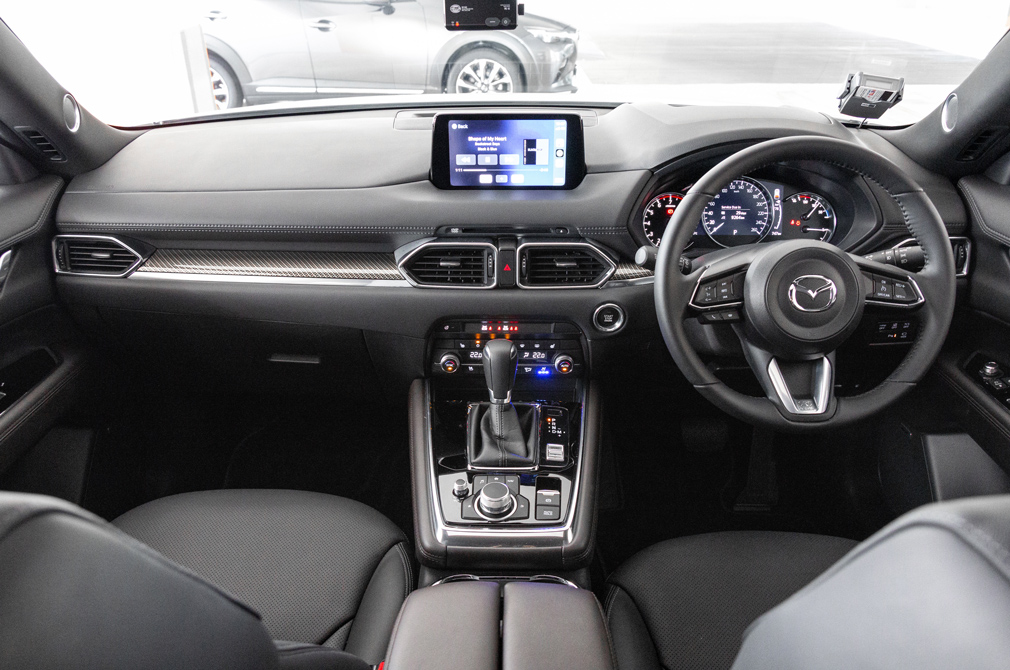 Despite being a large SUV, the Mazda CX-8 is driver-centric. The moment you slide in behind the wheel, there is a feeling of “rightness”. Which is really very hard to get right (no pun intended).

When you think of the cars that have spot-on driving positions, you tend to think of Ferraris, Porsches and other supercars and sports cars designed to fit their drivers like a glove.

You do not expect the same in the Mazda CX-8, which is why it’s a pleasant surprise.

From the contours of the steering wheel to the pedal placement and the way the gearshift lever falls naturally to hand, this “rightness” is an intrinsic quality that is hard to quantify.

There are a few things that could be improved, though.

The Mazda CX-8’s infotainment, for instance, isn’t the sublime, minimalist system found in the latest Mazda 3. It’s still the previous-generation unit, which while equipped with Apple CarPlay, is definitely showing its age.

The air-con controls look like they have been crammed between the air vents and centre console. It doesn’t help that the gearshift lever sort of blocks them – especially when you just want to activate the cool seat ventilation function.

The last thing that should be present here are paddle shifters. Fortunately, the gear lever lets you play with the manual override functions – with the -/+ points in the “right” positions. The Mazda CX-8 is no sports car. Yet somehow, it is pleasing to drive.

Beneath its sizeable bonnet resides a naturally aspirated 2.5-litre inline-4 that delivers 192hp and 258Nm. But if you were expecting a smaller displacement turbocharged motor, don’t be disappointed just yet.

The powerplant still feels capable when hauling this nearly 1.8-tonne SUV (1793kg, to be exact). If you’re driving alone, it can do zero to 100km/h in 10.7 seconds, which is relatively respectable. Having another 50hp and 100Nm would of course be nice.

In the meantime, the 2.5-litre offers its eagerness to rev to your right foot. Complementing this is a responsive 6-speed automatic that’s also willing to kick down two ratios when the driver demands it.

When you’re not putting the pedal to the metal, the Mazda CX-8 saunters along smoothly. The only intrusive sounds are that of the fans under the front seats. But considering their purpose, I’m not going to complain.

The Mazda CX-8’s size isn’t an issue until it comes time to park. Only in carparks do its sizeable dimensions make you more cautious. 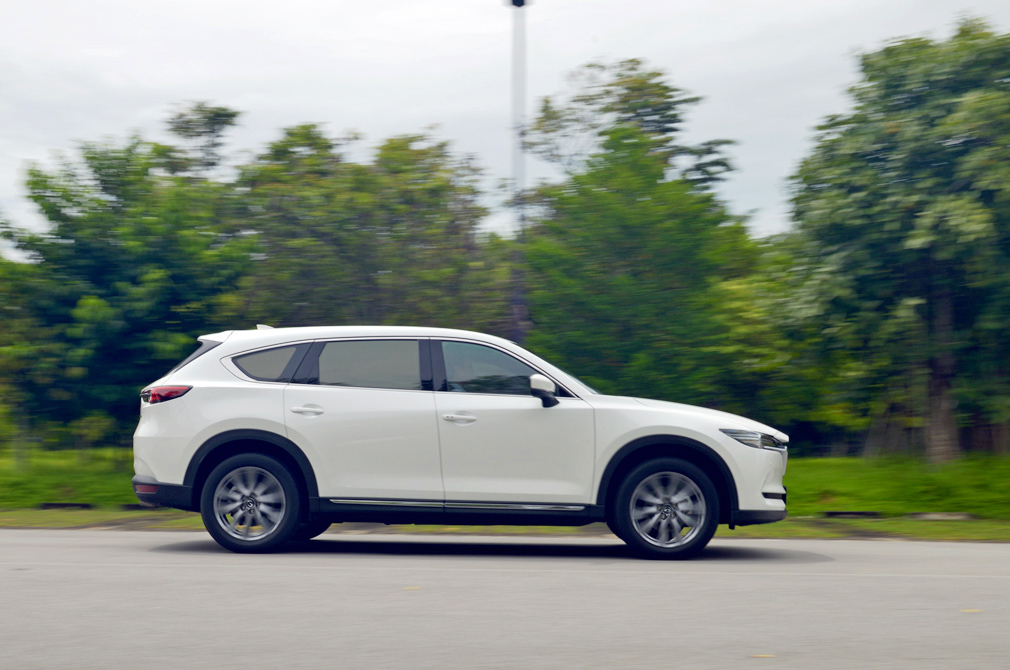 The CX-8 handles well for its size. (Photo: Jeremy Chua)

The 360-degree parking camera helps in this regard. But don’t use it to check if you’ve aligned the vehicle properly – I highly recommend utilising the mirrors instead. The cameras are best for ensuring that there’s nothing around the vehicle as you’re reversing.

Considering how the Mazda CX-8 measures 4900mm long and weighs 1.8 tonnes, it doesn’t handle like a boat. Provided you don’t force it to corner like a hatchback, it’ll tackle bends in a progressive and predictable manner.

High-performance tyres would be a good upgrade here, as they would shorten braking distances and enable you to hold your line through corners at higher speeds.

If you think a CX-5 is too small for your needs but a CX-9 is overkill, then the six-seater Mazda CX-8 is worth checking out.

Opting for one means that you cannot retrofit an additional seat if you suddenly need it. So, consider this decision carefully.

If do decide to go with the Mazda CX-8, you’ll enjoy a cabin that’s larger and more upmarket compared to the CX-5. You also get more boot space for hauling cargo.

And for some drivers, owning a niche model is appealing in itself, especially when they consider how common seven-seater SUVs are today.

The Mazda CX-8 may be the middle child in the brand’s large SUV line-up. But rather than being forgettable, it’s distinctive – and memorable. 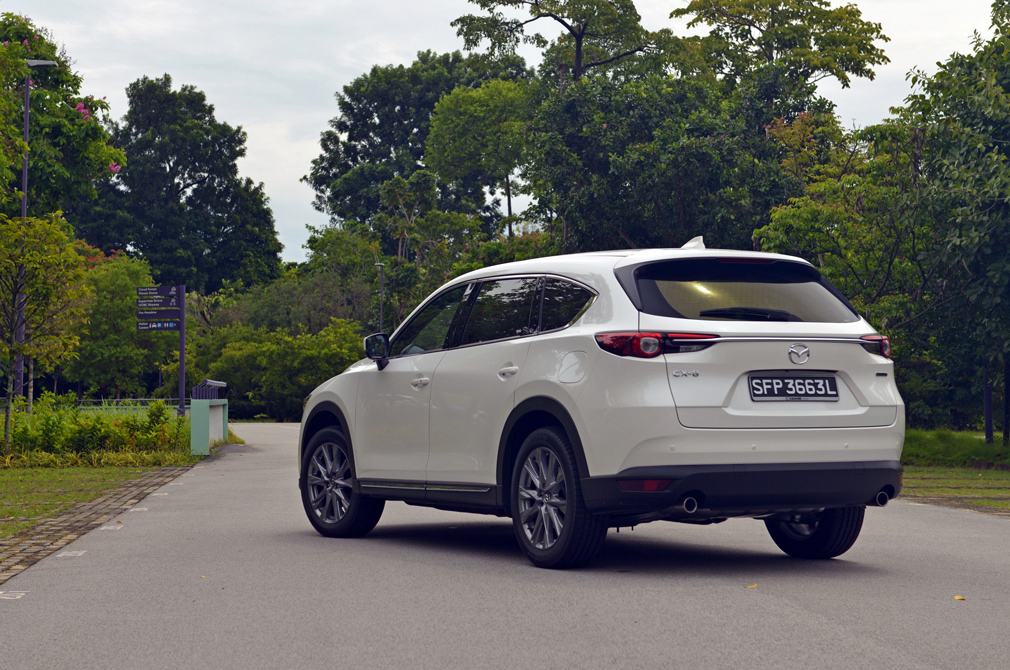