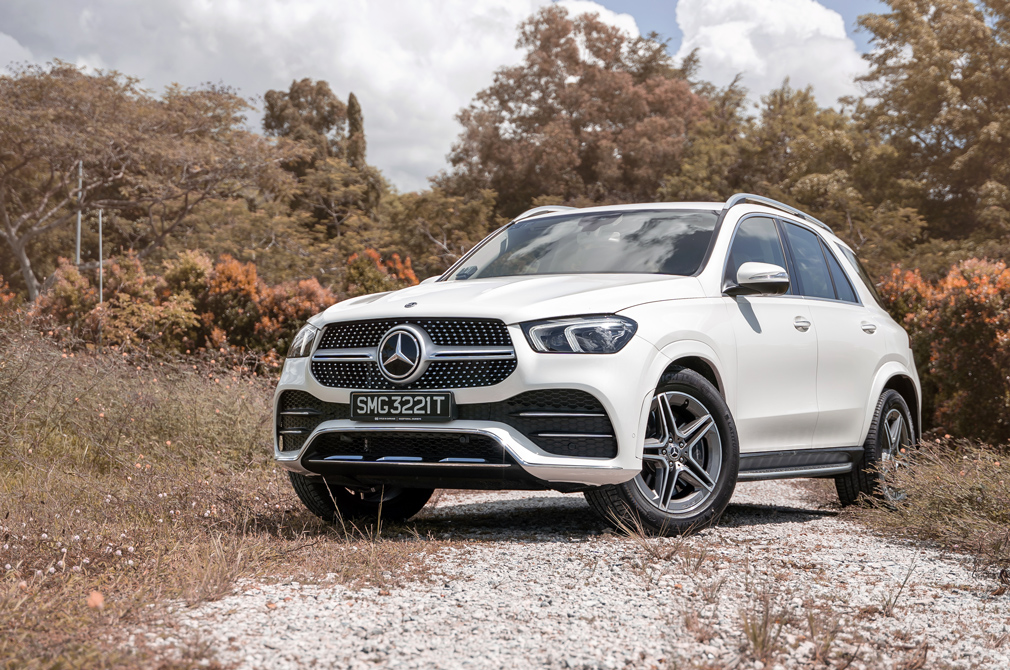 Traditionally, the towkay’s preferred ride of choice is a big luxury saloon. Favoured models include the Audi A8, BMW 7 Series and of course, the Mercedes-Benz S-Class.

Large limousines reflect their owners’ success and status. When they pull up to a building driveway, you know who’s arrived.

But the appeal of a big limo may be lost on a more “modern” towkay, who has witnessed the rise and continued popularity of SUVs. He or she may be more likely to opt for a luxury SUV such as the Mercedes-Benz GLE450, instead of an S-Class. 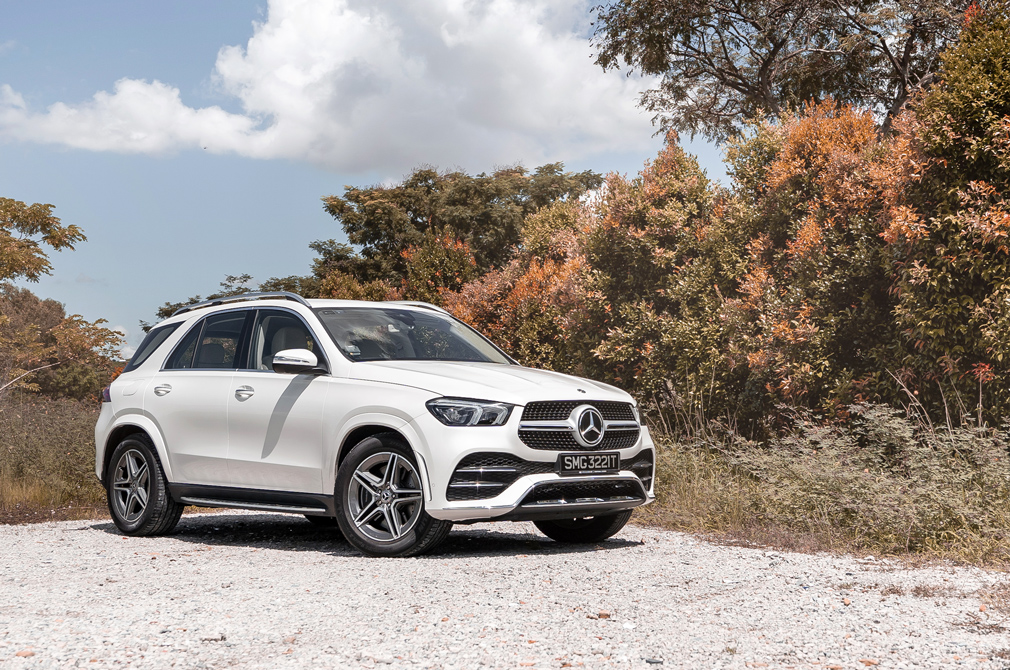 MERCEDES-BENZ GLE450: I AM BIG

If it’s road presence you need, then the Mercedes-Benz GLE450 has it in abundance.

Also big are the 20-inch wheels and chunky 275/50 size tyres, which look like they could flatten superminis. The GLE’s large “diamond” grille and equally massive three-pointed star further magnify its presence.

To give this SUV a more balanced look, the headlights and tail-lights are reasonably sized.

I like the square exhaust finishers and the shiny trim that “links” them together. Instead of adding more bling, the designers wisely chose to let the SUV’s dimensions do the talking. 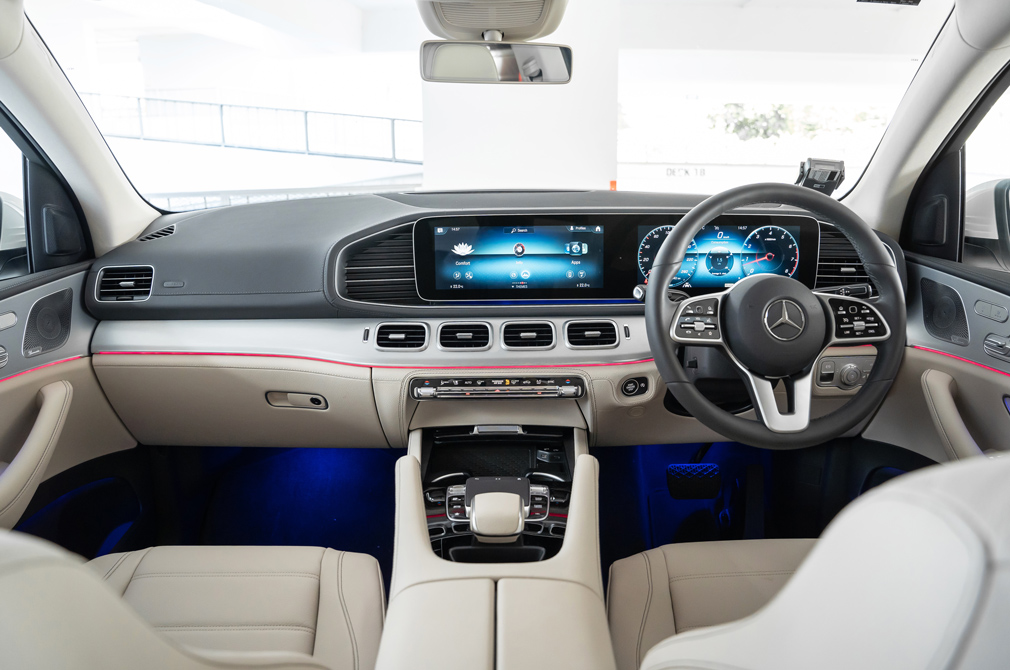 One does not get into or hop into a Mercedes-Benz GLE450 – you climb up into it. The running boards are a boon for more petite passengers.

The GLE450’s cockpit feels massive. There’s plenty of headroom and shoulder room, and there’s a wide gulf between you and the front passenger. Social distancing will be easy.

I’m told that these screens are identical to the ones in other MBUX-equipped models. However, they seem less reflective compared to say, the ones in the A-Class and B-Class models, which is a good thing.

There are several different instrument layouts to choose from, and a myriad of colour choices for the mood lighting. 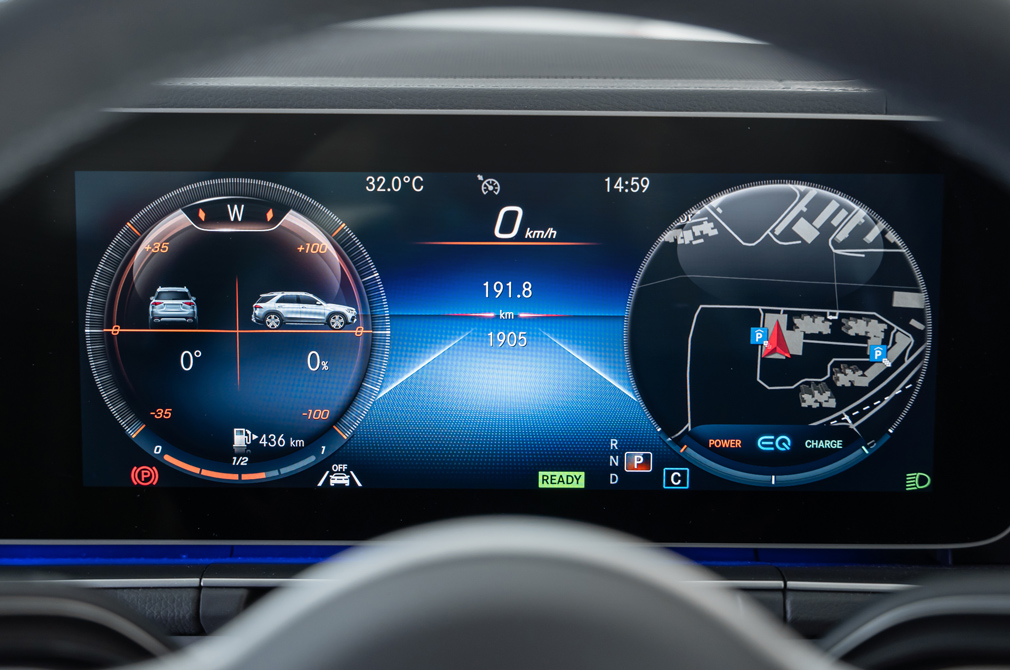 Use the touch screen or little touch surfaces on the steering wheel to navigate through the menus, because the touchpad itself is annoying. It’s not very accurate, and it makes clicking on the menu options tricky.

Second-row accommodations are generous in the Mercedes-Benz GLE450, with plenty of legroom and headroom. And it’s a cool place, too, with the centre console’s air-con vents supplemented by another pair of vents on the B-pillars.

The middle passenger won’t be too comfy though, as he or she gets a shorter squab and must deal with a sizeable floor protrusion.

The last pair of seats is the least comfortable place for adults. Access is tricky, accommodations are tiny, and ingress/egress takes a while as the powered second-row seats fold quietly, but slowly. 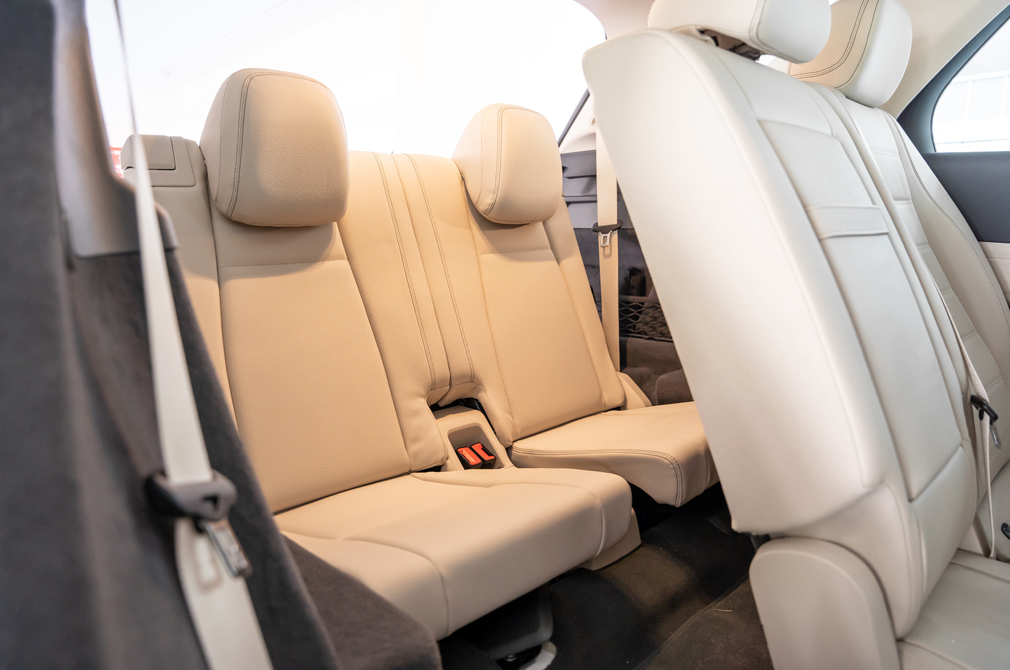 Beneath the Mercedes-Benz GLE450’s big bonnet is a turbocharged 3-litre inline-6 producing 367hp and 500Nm.

It is also equipped with 48-volt mild hybrid technology, which features an electric motor that delivers an additional 22hp and 250Nm over short periods when needed.

The extra output is particularly welcome in an SUV weighing 2220kg – sans driver. Without that extra torque, the Mercedes-Benz GLE450 would have felt lethargic.

Instead, the Mercedes-Benz GLE450 feels more light-footed than expected. Stab the accelerator pedal and it surges forward with authority.

Plant the pedal to the floor and this enormous SUV will hit 100km/h in 5.7 seconds (that’s hot hatch territory), accompanied by a rorty straight-6 soundtrack. I much prefer this to the previous V6 engine. 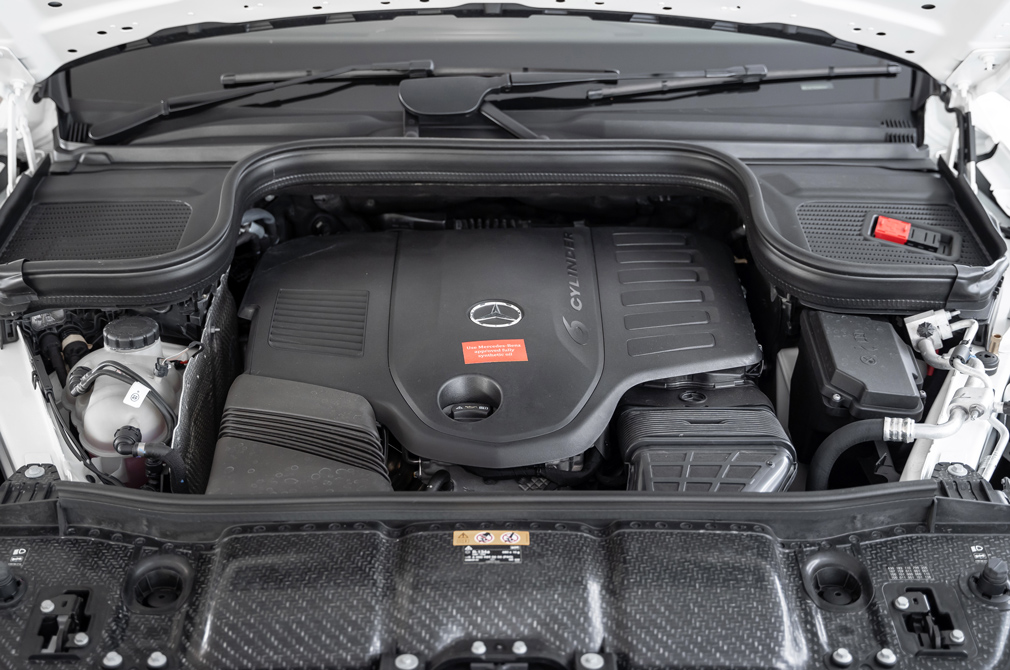 The Mercedes-Benz GLE450 moves like a yacht sailing on calm waters. It provides an undisturbed, pillowy ride – something to look forward to after a stressful day at the office.

There’s very little wind noise, while surface imperfections are either ironed out or ignored. Naturally, given its size and heft, attempting to grab it by the neck and thrash it is a bad idea.

Unless of course, you enjoy the feeling of being tossed about as the Mercedes-Benz GLE450 leans and rolls in response to rapid directional changes. This is an SUV that excels in pampering its occupants, not slicing through corners.

Even with six people on board, the GLE450 did not struggle to accelerate or slow down. That says a lot about the added oomph from EQ Boost, and the effectiveness of the brakes and tyres. 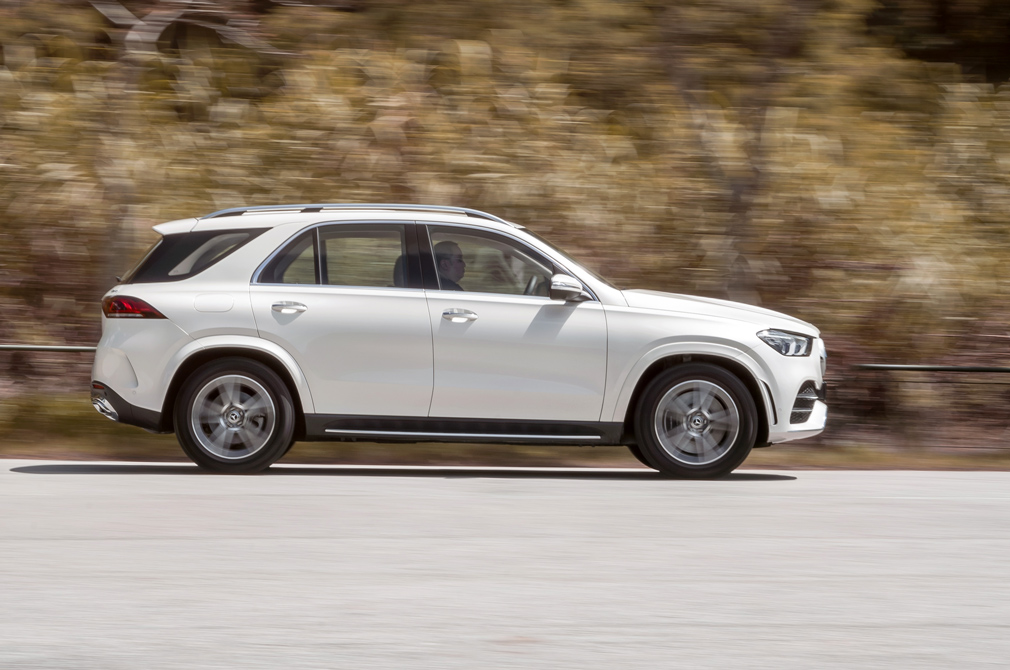 AN SUV INSTEAD OF A LIMO

It is bigger, heavier and thirstier than a regular luxo-barge. Handling isn’t its strong suit and parking it is even trickier. You need to have both skill and confidence to drive something this big.

But for modern towkays who want something different, the palatial and presidential GLE450 ticks all the right boxes. It has enormous presence, is filled with the latest technology and oozes refinement.

There is also plenty of power and performance on tap, which most bosses would enjoy having. And the fact that it can do some off-roading is a definite plus, too. 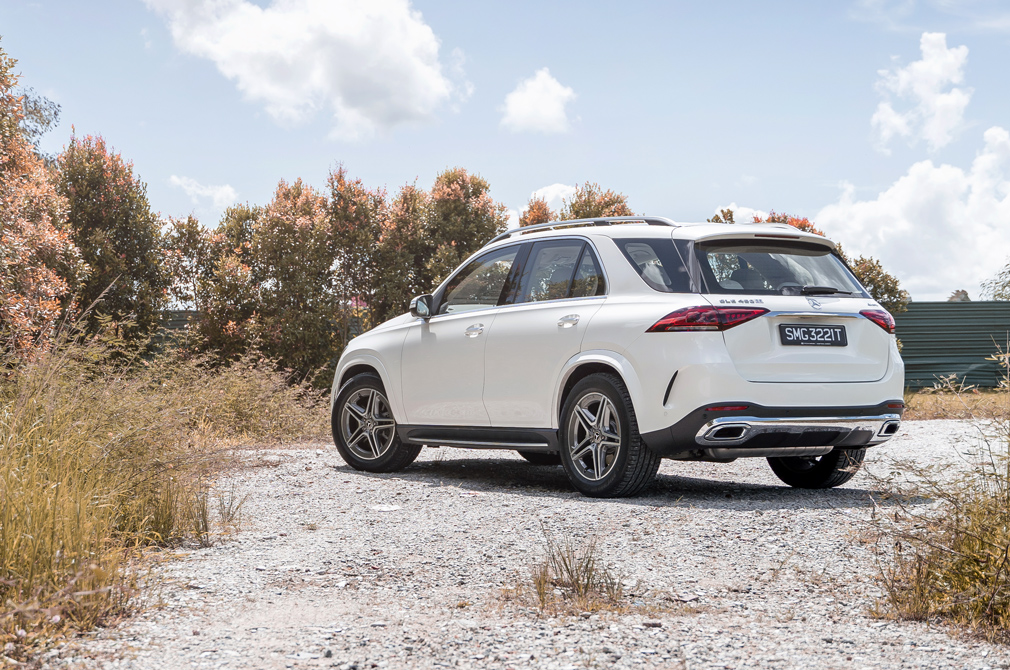 Considering other seven-seater MPVs? Check out our BMW X5 review
Or read our review of the Audi Q7 instead