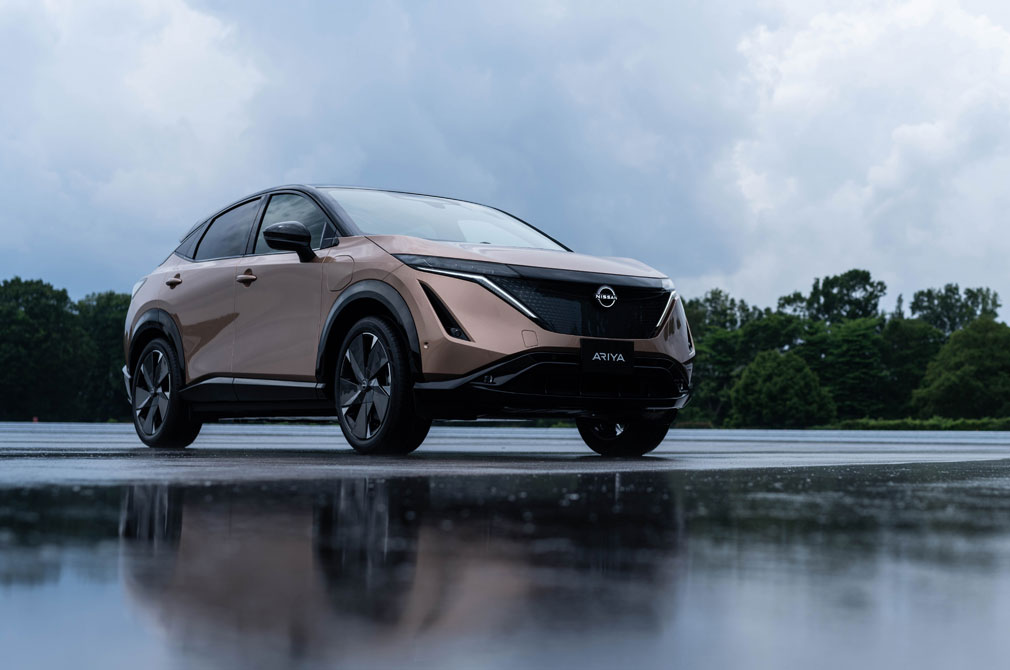 The Nissan Ariya sports a design which Nissan describes as “Timeless Japanese Futurism”. Its ethos is characterised by a distinctively Japanese approach conveyed in a simple-yet-powerfully modern way.

The Ariya’s designers have embraced this with the key attributes of “sleek, sexy and seamless”. Their aim was to communicate how an EV paired with advanced driving capabilities can offer a new perspective to design, function and ownership.

Up front is a shield that incorporates a 3-D Japanese kumiko pattern just under the surface. This shield protects the sensing equipment used for the ProPILOT functions and houses the redesigned Nissan logo. 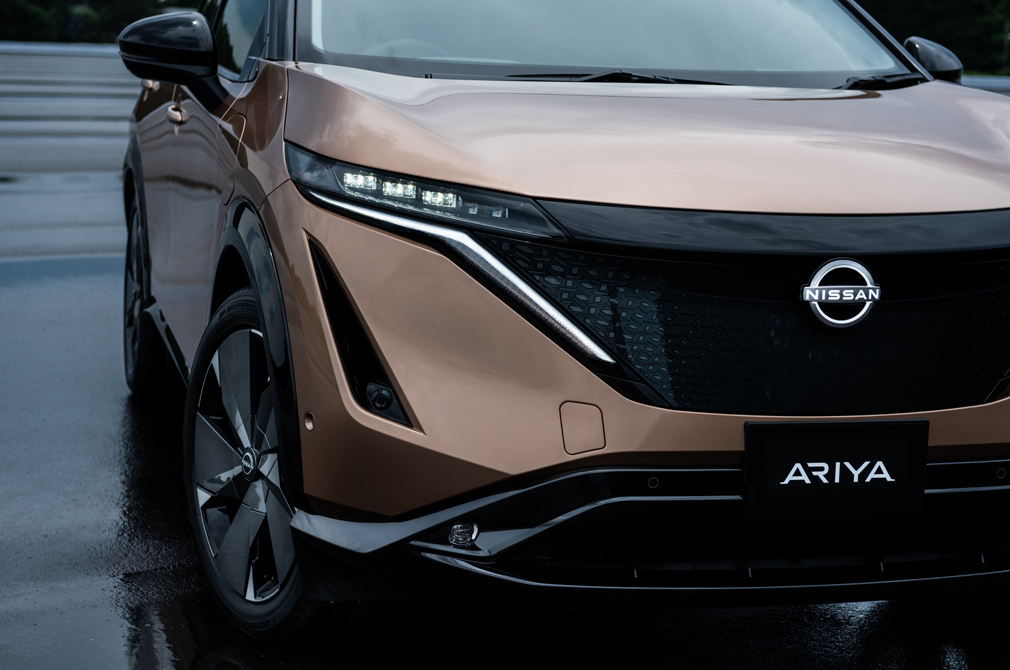 3-D Japanese kumiko pattern lies underneath the smooth surface of the Ariya’s front.

The lower section is bordered by subtle lighting that is illuminated along with the logo when the Nissan Ariya is turned on.

Meanwhile, the rear of the Nissan Ariya is characterised by a steeply raked C-pillar that blends flawlessly into the rear deck.

A one-piece light blade rests at the rear, serving as the rear combination lamps. It has been engineered to have a blackout effect when parked, while providing a consistent red illumination when the vehicle is in use. 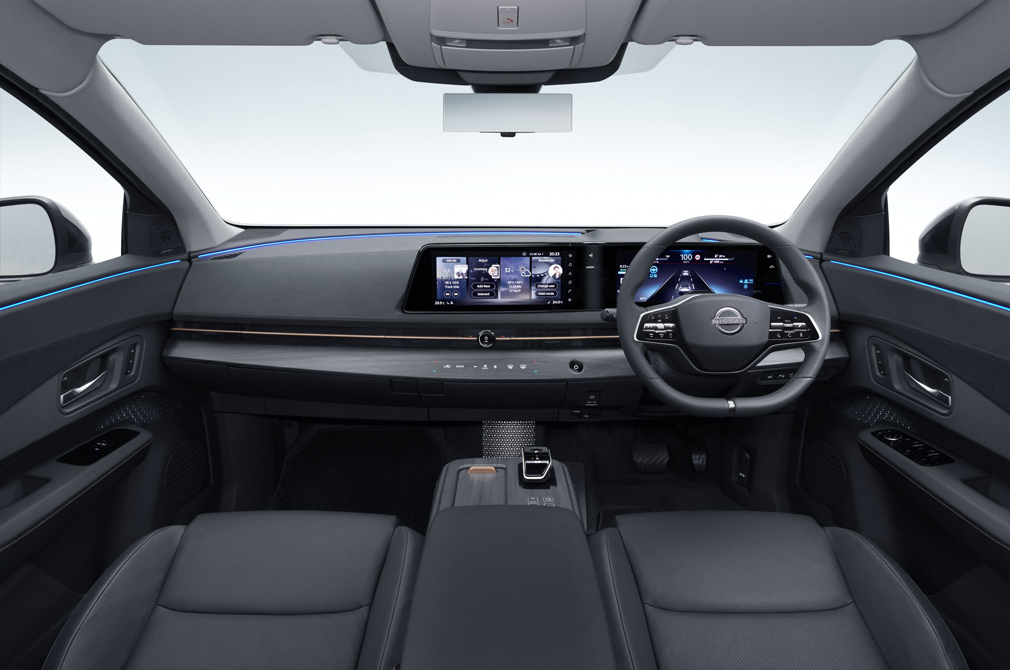 The cabin of the Nissan Ariya has been designed to mimic a “sleek cafe lounge on a starship”.

Front-seat occupants are treated to the Ariya’s minimalist dashboard – devoid of buttons and switches – which blends seamlessly with the shape of the cabin and smoothly transitions into the doors.

The display interface features a 12.3-inch instrument monitor and a 12.3-inch centre display along a single horizon. By displaying multiple facets of information on one horizontal plane, information can be quickly digested without the driver being distracted from the road.

The two displays are oriented in a wave-like shape to ensure important vehicle information, such as battery information, range and navigation, can be easily accessed with a swipe. 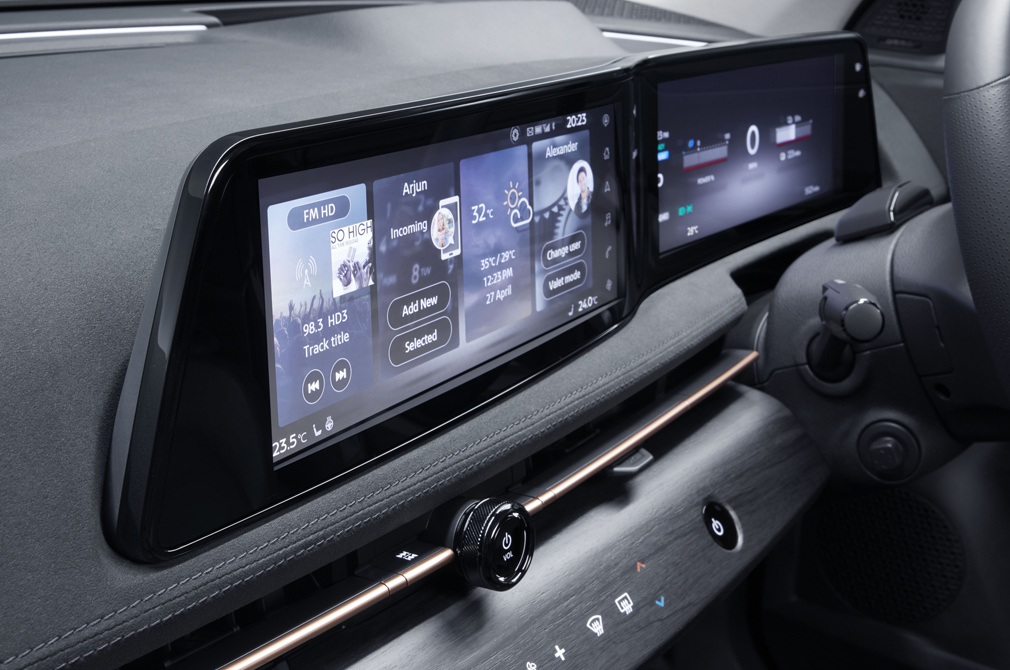 The 12.3-inch instrument monitor and 12.3-inch centre display are arranged in a wave-like pattern to maximise visibility.

Rear passengers are treated to an abundance of headroom and legroom, thanks to a flat cabin floor and thin front seats.

The Nissan Ariya will be offered with either a 65kWh or 90kWh battery, and with either front-wheel-drive or all-wheel-drive. The latter system is what Nissan calls e-4ORCE.

There will also be five power outputs to choose from, ranging from 215hp for base two-wheel-drive variant to the 389hp of the top-of-the-range performance model. The latter model also gets the larger battery and all-wheel-drive. 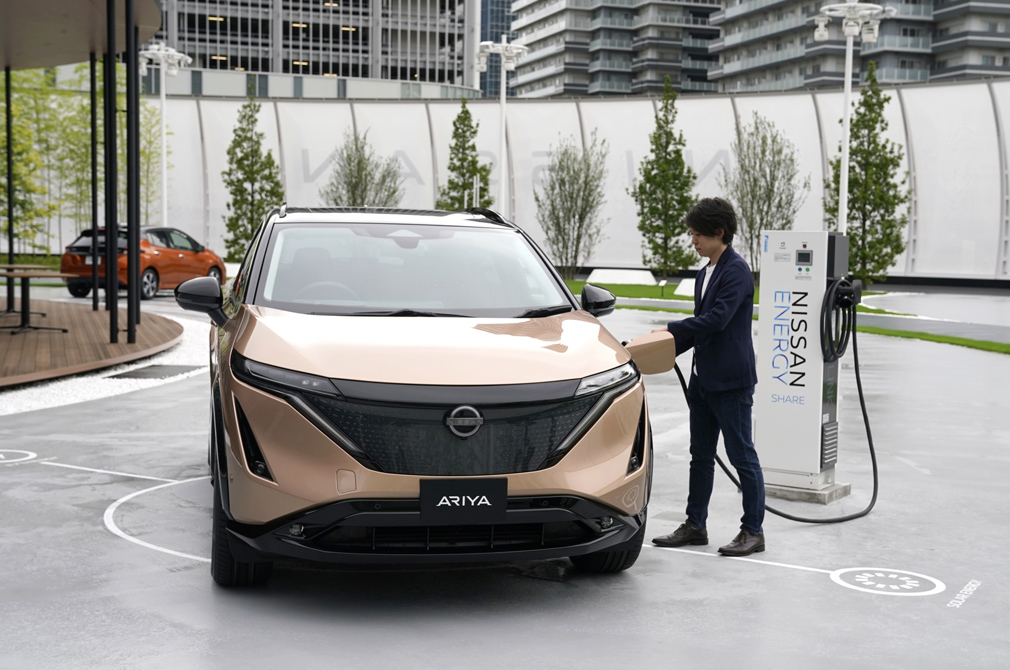 The Nissan Ariya supports high-speed charging at up to 130kW.

The two-wheel-drive model with the 65kWh battery delivers a range of up to 450km (Japan WLTC cycle), while the 90kWh version is capable of up to 610km – the most in the lineup.

EVs are capable of quick acceleration due to their instantaneous power delivery. In this regard, the entry-level 215hp Nissan Ariya does the century sprint in 7.5 seconds, while the range-topping 389hp all-wheel-drive model does it in 5.1 seconds.

The Nissan Ariya supports quick charging up to 130kW for faster recharging during long journeys. According to official agent Tan Chong Motor, the SUV will reach Singapore in the first quarter of 2022.

Read our review of another electrified crossover from Nissan, the Kicks, here!
Or read about the all-electric Nissan Leaf here!