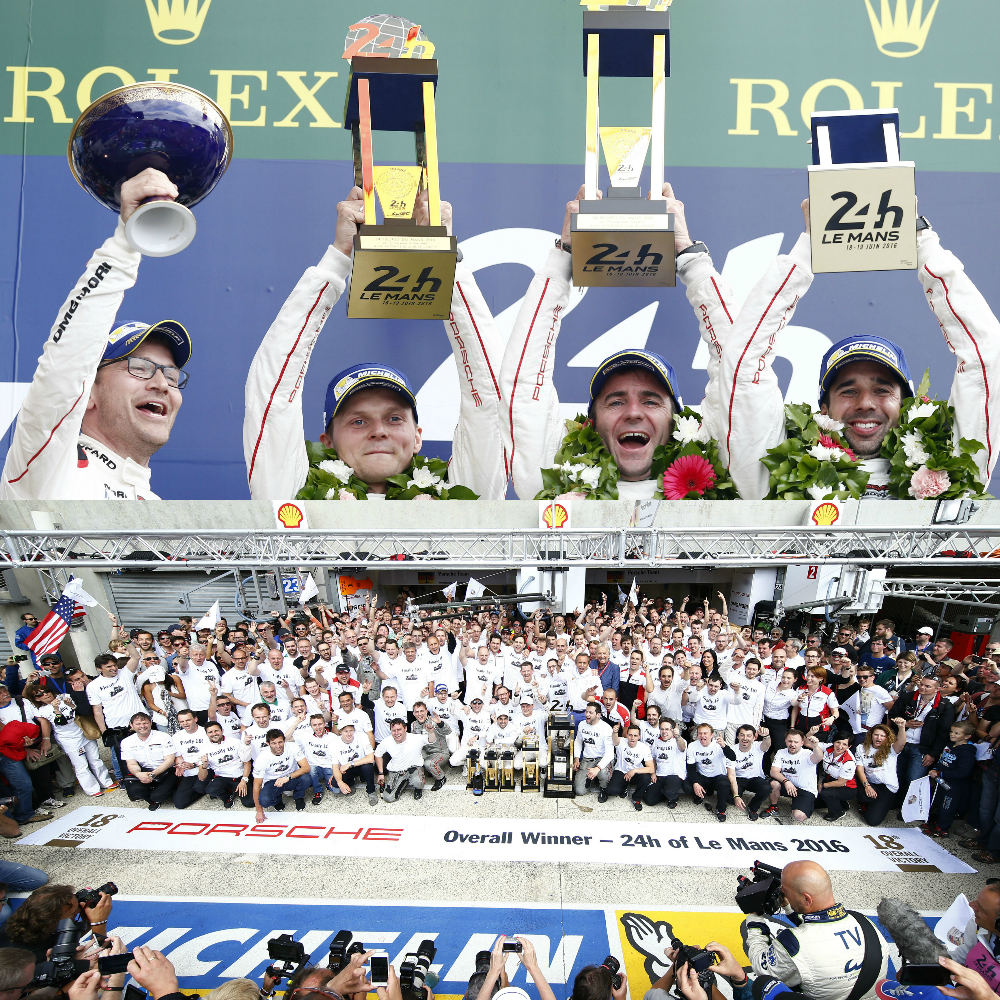 From midnight, the duel between Porsche and Toyota for the 24 Hours Le Mans race win had intensified, but no-one would have expected such an ending.

Before the final lap, Toyota seemed to be coming out on top, but then the prototype stopped on track. One lap later it was the No. 2 Porsche 919 Hybrid of Romain Dumas, Neel Jani and Marc Lieb that took the chequered flag first in front of some of the 263,000 spectators who attended the event. It was the same trio that had achieved the maiden win for the 900bhp prototype in 2014 in Brazil.

This success is the 18th overall victory for Porsche at the world’s hardest car race. One of the most eligible trophies on the globe will be homed for the second consecutive year at Porsche’s headquarters because the company came as record holder and title defender.

In 2015, drivers Earl Bamber, Nico Hülkenberg and Nick Tandy won with a Porsche 919 Hybrid. The first ever overall Le Mans victory for Porsche dates back to 14 June, 1970 and was achieved by Hans Herrmann and Richard Attwood in a 917 KH Coupé.

The second Porsche 919 Hybrid with car No. 1, shared by reigning endurance world champions Timo Bernhard, Brendon Hartley and Mark Webber, had a long stop for repairs at night, fought back and finished 13th overall. In the LMP1 class, it came fifth.

Porsche was rewarded in Le Mans with a total of 71 points for the manufacturers’ standings of the FIA World Endurance Championship (WEC). For the Le Mans 24 Hours, twice as many points are awarded as for the other eight six-hours races of the championship.

Porsche leads the manufacturers’ standings with 127 points ahead of Audi (95) and Toyota (79). In the drivers’ standings, Dumas, Jani and Lieb now have 94 points in total and lead by 39 points.

Porsche’s team principal, Andreas Seidl, said after the race: “First of all, we certainly feel for our colleagues and friends from Cologne. To give away such a great race this way on the last lap is something you wouldn’t wish on your worst enemy. But this is the sport with all its highs and lows, and that’s also why we love it for. It was a strong fought victory. We had to put Toyota under pressure and went flat out for the entire race. As happy as I am for the number 2 crew, I feel sorry for the guys from the number 1 car. Without the failure and the long repair, they would have been able to fight for the win as well. To win Le Mans is the highlight of the season and it is difficult to believe we have managed it twice now in what is only our third year. Now we look forward. We take a lot of points from here and now we want to defend both world championship titles as well.” Endurance racing is difficult even for the ones who aren’t racing.

Read about the race-bred Porsche 911 R.