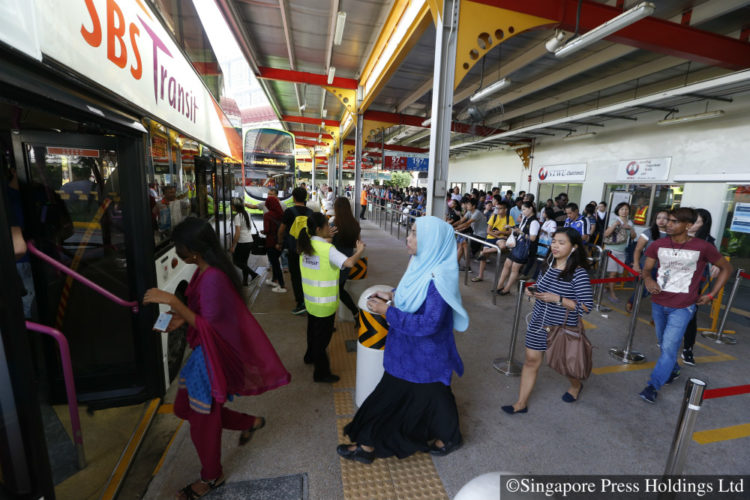 Many commuters were initially caught off guard yesterday by the first of two scheduled full-day closures of 19 stations on the East-West Line (EWL) and North-South Line (NSL). However, they said the exercise was well organised.

Signage directing commuters to four shuttle bus services was prominently placed on walls, and more than 400 staff and crowd marshals were around in shifts to direct commuters.

To help shift workers get home and to work, there was also an express shuttle bus service between Boon Lay and Outram stations in the early hours of the morning.

The 19 stations on two lines – those on the 17-station stretch from Tiong Bahru to Tuas Link on the EWL, as well as Bukit Batok and Bukit Gombak stations on the NSL – will be closed all day again next Sunday.

Travel times yesterday were as much as three times longer for some people. For instance, the bus ride from Jurong East to Outram Park took almost an hour, compared with about 20 minutes by train.

“Buses don’t move as fast as trains, so we ask commuters for their understanding,” said Mr Vincent Gay, director of operations support and resource management at SMRT Buses. He added that some commuters also complained about the walk to the shuttle bus queues at Jurong East station, which are rather spaced out.

He said this arrangement was to prevent the road network from becoming congested.

Long queues formed last night, especially for shuttle buses towards Choa Chu Kang, as heavy rain slowed traffic in Jurong Gateway Road. Queues stretched for about 100m, but cleared quickly as the shuttle bus frequency was quite high. Those in line waited for less than five minutes.

The 350 shuttle buses, driven in shifts by more than 700 drivers, plied the same route as the trains. The fares on these services followed the rail fare structure.

Madam Lai Hun Fua, 50, a service employee at a shopping centre, said she left her home in Jurong West an hour earlier to take the shuttle bus from Pioneer to Jurong East station, near where she works. “I was afraid that it would be very messy,” she said. “But (crowd marshals) gave us brochures and told us about the different shuttle bus routes, so it was quite easy to plan my trip.”

Her journey, including waiting time, was 20 minutes, instead of the usual eight minutes.

“It’s a bit inconvenient and I think I’ll be late for my religious class in Marsiling. But the staff gave clear directions.”

In the light of the closure, ride-hailing firm Uber offered existing users $3 off two UberX or Uberpool trips from affected stations yesterday.

The 19 stations will, till Dec 31, also close earlier at 11pm on Fridays and Saturdays, and open later at 8am on Saturdays and Sundays.

A survey of 711 commuters by travel app Moovit found that 65 per cent of them will opt for public buses, followed by private-hire car services (38 per cent) and bus shuttle services (32 percent) to cope with the shorter operating hours.

Taking taxis (26 percent) was the next most popular option, followed by avoiding any travel during the affected hours (12 percent). Survey respondents could choose more than one preferred option.

Sales executive Susan Yeo, 61, who commutes from West Coast to her workplace in Bugis by bus and train, will take service 197 from home instead. This could take her directly to Bugis in an hour, or she could transfer at Outram MRT station and complete the rest of her journey by train.

“The latter option can save me about 10 minutes, but it’s troublesome,” she said, adding that she is likely to take the bus-only option.