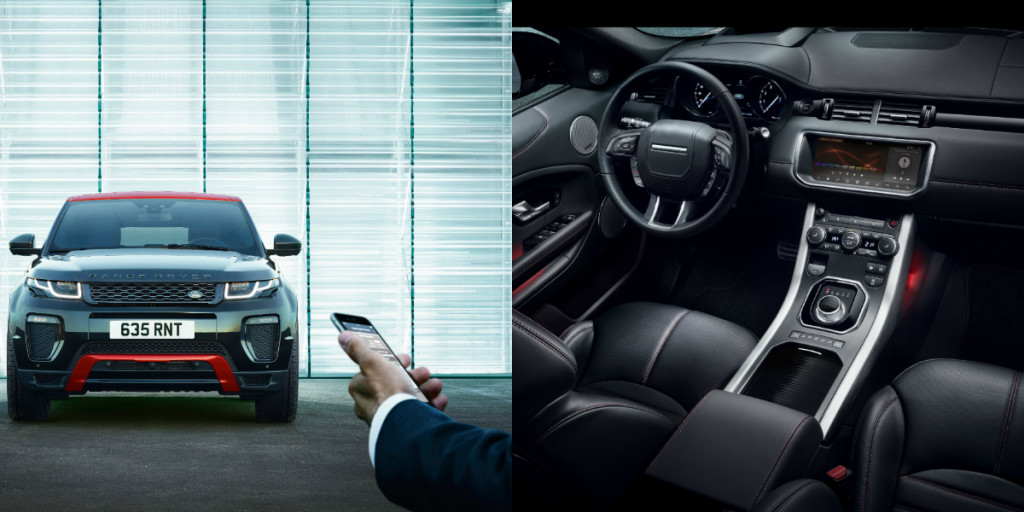 Land Rover has introduced a special edition of its fastest selling model, the Range Rover Evoque (tested here in 9-speed automatic form). As part of a package of enhancements to the original luxury compact SUV, the striking “Ember” edition features a bold red and black theme to boost its designer appeal.

The new model year 2017 Range Rover Evoque also offers next-generation InControl Touch Pro infotainment across the range. It provides a 10.2-inch tablet-style touchscreen with pinch-and-zoom control and a customisable home screen to ensure the driver’s and co-driver’s favourite apps are always at their fingertips.

The red-and-black themed “Ember” special edition builds on the attributes of the Evoque HSE Dynamic with striking exterior and interior details. A distinctive Firenze Red roof contrasts with the Santorini Black body colour and is complemented by matching exterior design elements, including the front and rear tow eye covers.

The new InControl Touch Pro infotainment system optimises in-car connectivity by providing faster responses and more intuitive operation. Introduced from launch on the Evoque Convertible, this now becomes available for the rest of the Evoque range from model year 2017.

The touchscreen behaves like a smartphone or tablet with swipe, pan and pinch-to-zoom controls, and it provides a clearer 21:9 super-wide format with 1280×542 pixel resolution – an 80 percent increase over the Evoque’s standard eight-inch touchscreen.

Using the Land Rover Route Planner smartphone app, destinations can be pre-planned and synced to the vehicle ,ready for easy selection. Touch Pro also offers door-to-door navigation even after the car is parked, handing over to the Route Planner phone app to display public transport and pedestrian directions to the final destination.

InControl Touch Pro can share customers’ ETA with friends and family. If the driver is running later than expected, Touch Pro can automatically keep them informed by sending updates via SMS.

Additional features include high-definition 3D maps and a bird’s-eye-view surround camera system allowing drivers to see the vehicle from above, ideal for negotiating narrow streets or tight parking spaces.

“Low Traction Launch” further cements the Evoque’s outstanding all-terrain capability. This new feature is a manually selectable driver mode that aims to deliver the optimum pull-away/launch on a low-friction surface or terrain. It controls the amount of torque that the driver can apply, thus preventing wheelspin and maximising the potential driving force that can be achieved given the conditions.

Land Rover’s Range Rover Evoque has surpassed half a million sales globally and amassed over 180 international awards since its debut in 2011.