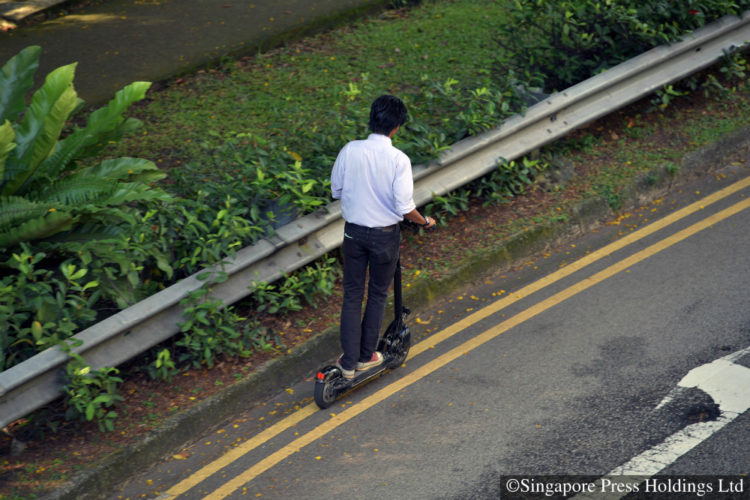 A man rides an e-scooter along Marymount Road.

In a toughened stance against an increasing number of offenders, the Land Transport Authority (LTA) said on Tuesday (Jan 2) that a composition fine of $300 and $500 will be issued for first-time offenders who ride on local and major roads, respectively.

First-time offenders caught using their devices on expressways will be charged in court. If convicted, these offenders will face a fine of up to $2000, as well as a possible jail term of up to three months.

Repeat court convictions will carry a fine of up to $5000 and, possibly, a jail term of up to six months. This applies to those caught using their devices on any public road.

The current penalty is a $100 composition fine for first-time offenders, regardless of the type of road that the device is used on. Second-time offenders are fined $200, and those caught for the third and subsequent times are fined $500.

Since the advent of PMDs, such as electric scooters and hoverboards two years ago, more have been sighted on roads – even though such devices are strictly confined to footpaths and park connectors.

In the first 11 months of last year, the number of errant users caught averaged 40 a month – 18 per cent more than the monthly average of 34 recorded in 2016.

The LTA said it is an offence under the Road Traffic Act to ride PMDs on roads, including expressways. Electric bicycles, however, are allowed on roads except expressways. But observers said the line separating e-bikes and other PMDs is fast blurring.

The new Active Mobility Act may address this. The Act, which will come into effect soon, will require users, among other things, to ensure that their PMDs weigh no more than 20kg and measure no wider than 700mm. They also cannot exceed a speed limit of 15km/h on footpaths, and 25km/h on cycling and shared paths in park connectors.

Meanwhile, the LTA has increased the number of enforcement officers from 24 in June to more than 50. Officers are also being equipped with speed guns to make sure that PMD users stick to the speed limits in the new Act.

“With the increasing popularity of food-delivery services, we have also been working with such companies to educate their PMD delivery crew on safe riding tips and rules, such as not riding on the roads,” the LTA said.

The tougher laws come on the heels of several PMD-related incidents.

Last November, a 52-year-old man using such a device died in an accident with a double-decker bus in Kaki Bukit. The same month, another man was arrested after a video showing an e-scooter zipping down the Pan-Island Expressway went viral on social media.

In October, Transport Minister Khaw Boon Wan told Parliament that there were about 90 accidents involving electric bicycles and PMDs in the first half of 2017. These resulted in four deaths and about 90 injuries.