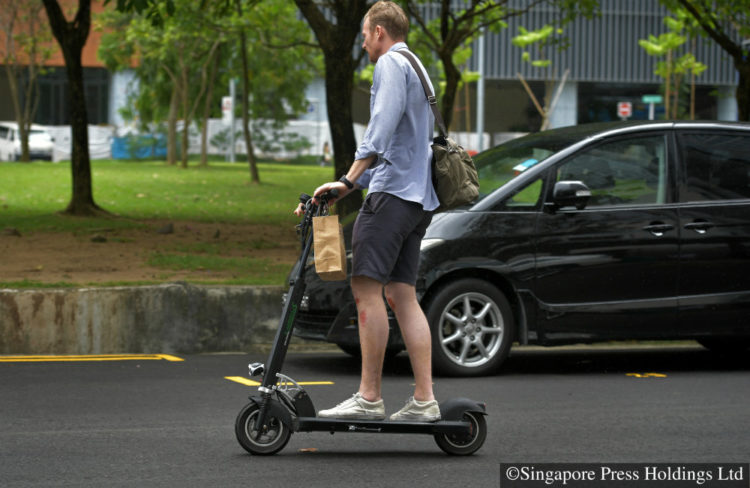 A caucasian man on an electric scooter along Tras Street on 14 Feb 2017.

The stiffer penalties for personal mobility device (PMD) users caught riding on roads is a timely move, observers said on Tuesday (Jan 2), amid a rise in the number of offences.

But at the same time, Singapore needs to step up public education and tighten regulations on the type of PMDs permitted for use, they added.

These added measures can help to curb the growing menace, which endangers both users of PMDs, which include electric scooters, well as other road users.

From Jan 15, the current $100 fine for using a PMD on roads will go up, with the addition of a tiered penalty system based on the type of roads on which users ride them, the Land Transport Authority (LTA) announced on Tuesday.

First-time offenders who ride them on a local road will be fined $300 and on major roads, $500. Those caught on expressways will be charged in court.

Nanyang Technological University senior transport research consultant Gopinath Menon believes the tougher penalties will be a deterrent and give enforcement efforts more “teeth” in taking PMD users off the roads.

But ultimately, Mr Menon added, “it is crucial to also educate PMD users that it’s in their own interest not to go on the road”.

Mr Bernard Tay, chairman of the Singapore Road Safety Council, said the impending penalties are timely as more PMD users defy the rules on riding on the road.

The LTA said an average of 40 PMD users were caught riding on the roads every month last year. This is 18 per cent more than the monthly average of 34 recorded in 2016.

To educate users, Mr Tay said PMD sellers could be asked to give brochures on the dos and don’ts to buyers.

It has also been working with grassroots organisations and PMD interest groups to get the message across.

MP Ang Hin Kee, deputy chairman of the Government Parliamentary Committee for Transport, said that as PMDs get more popular with the elderly, they need to be educated via platforms that appeal to them, like getai shows.

Meanwhile, Mr Tay suggested extra regulations on the type of PMDs allowed in Singapore, in addition to what is set out in the Active Mobility Act, which will take effect early this year.

“The authorities can introduce a type approval, issuing a mark or seal to PMDs that can be sold here,” he said.

The impending Act specifies that devices must adhere to a maximum weight of 20kg, a maximum width of 700mm, and a maximum speed of 25km/h.

Experts agree that getting PMD users off the road is an uphill task.

“Like pedestrians who jaywalk – they know it’s wrong, but they still do it. For many PMD users, they want to be on the road because there is no obstruction,” said Mr Menon, adding that pedestrians on pavements force them to slow down.

Mr Tay also said: “It’s about attitude. Many PMD riders see other users on the roads, and they follow suit.”