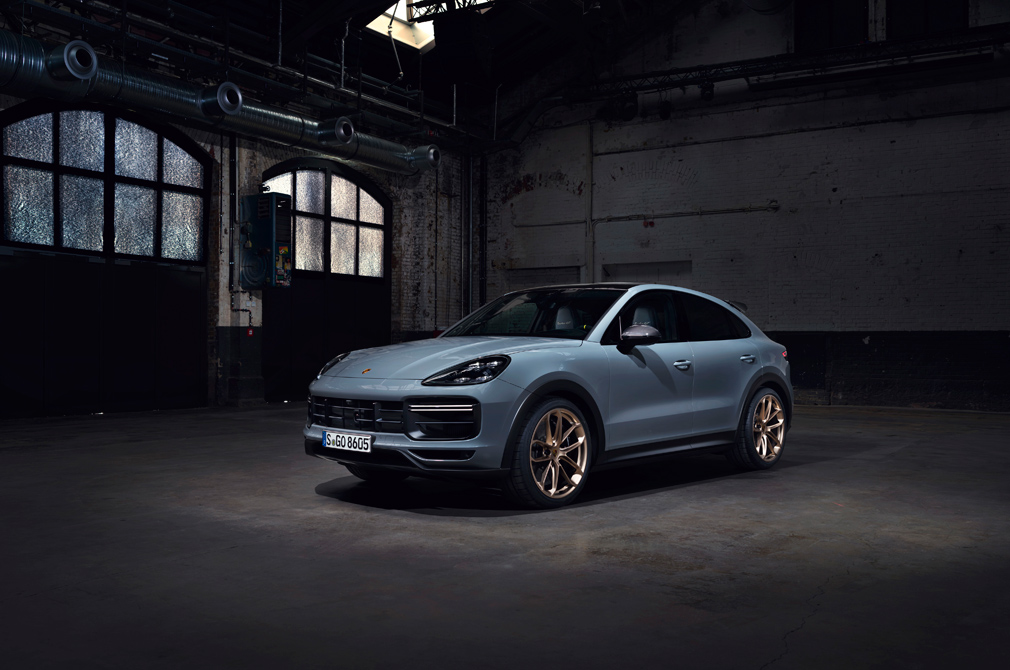 Porsche has unveiled a new sporting hero for the Cayenne range: The Cayenne Turbo GT

The Cayenne Turbo GT comes with a 631bhp bi-turbo V8. Producing a maximum torque of 850Nm, the engine is paired with a faster-shifting 8-speed Tiptronic S transmission to give the car a zero to 100km/h sprint time of just 3.3 seconds.

Adding to the performance brief, the Porsche Cayenne Turbo GT also comes with all available chassis systems fitted as standard and performance-specific tyres. 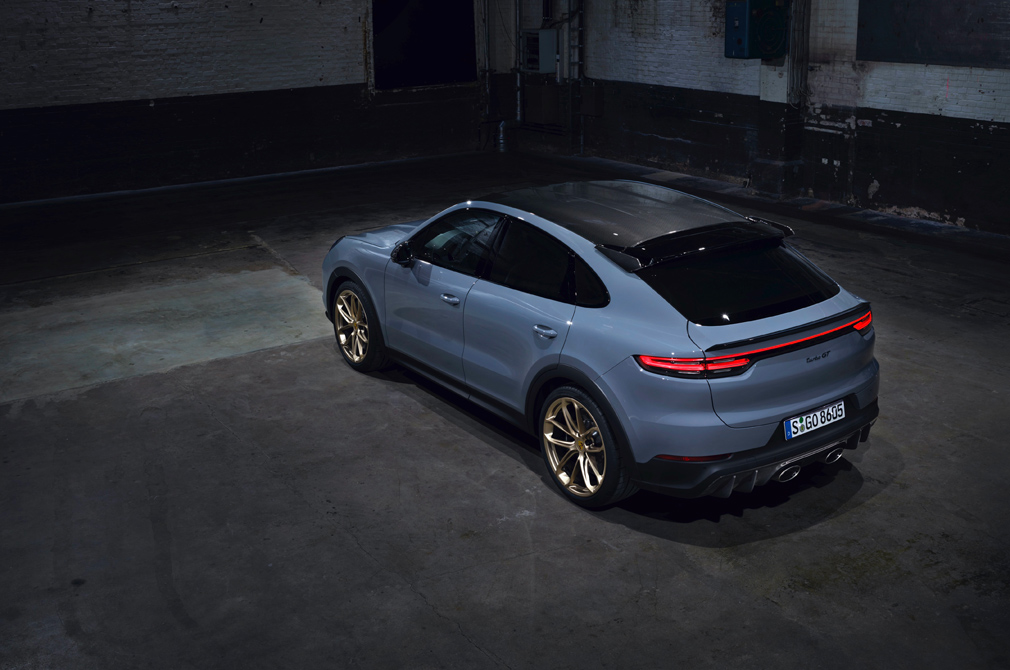 You can identify the Turbo GT from its contoured carbon roof and larger rear spoiler.

These include a 17mm lower ride height and 15% stiffer air suspension next to the Cayenne Turbo Coupe.

Also enhancing performance is specially adapted tuning for the Porsche Active Suspension Management and Power Steering Plus and rear-axle steering.

The Cayenne Turbo GT has also had its front axle comprehensively optimised. It features widened front tyres and an increased negative camber for a larger contact patch. Braking duties are performed by the standard-fit Porsche Ceramic Composite Brake system.

CARBON ON THE OUTSIDE

Exterior-wise, the Porsche Cayenne Turbo GT gets a GT-specific front apron, which can be identified from its striking spoiler lip and enlarged side cooling air intakes. 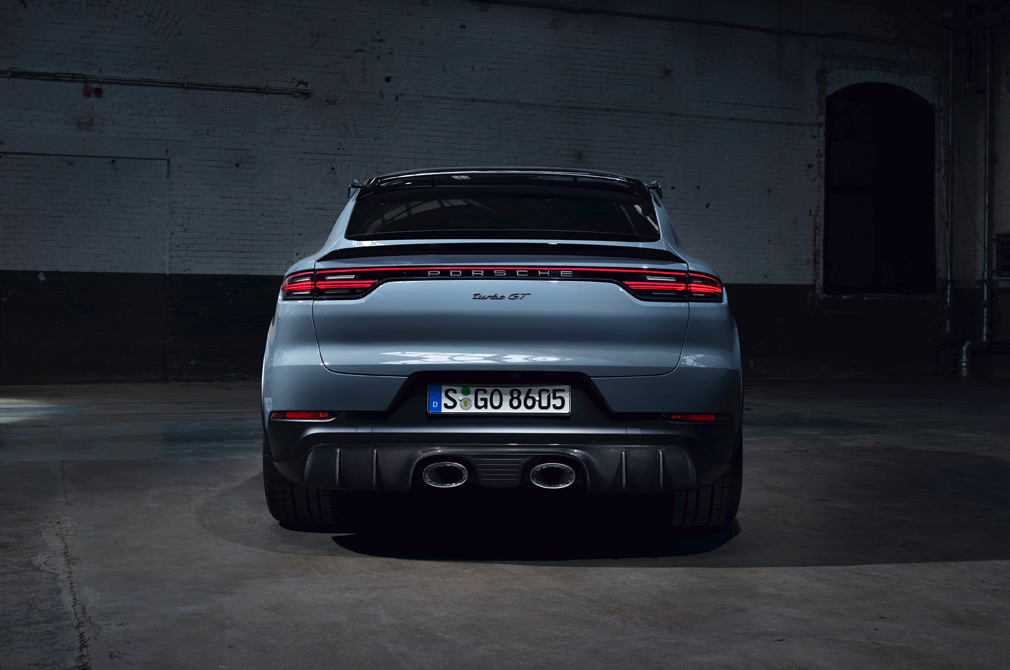 Titanium sports exhaust saves weight by doing away with a central silencer.

Also specific to the GT are carbon side plates fitted lengthwise to the roof spoiler, and the adaptively extendable rear spoiler’s lip, which is 25 mm larger than that fitted to the Turbo. The new spoiler is said to increase downforce at top speed by up to 40kg.

The view from the rear is rounded off by a diffuser panel made of carbon. A titanium exhaust system helps reduce weight through the omission of a centre silencer.

The sporty character of the Porsche Cayenne Turbo GT is also highlighted by the high-quality equipment and extended Alcantara features of its interior. Eight-way sport seats in front and a sport rear seat system with two seats are standard. They are GT-specific, with perforated seat centre panels in Alcantara, contrast accents in Neodyme or Arctic Grey and “turbo GT” lettering on their headrests. 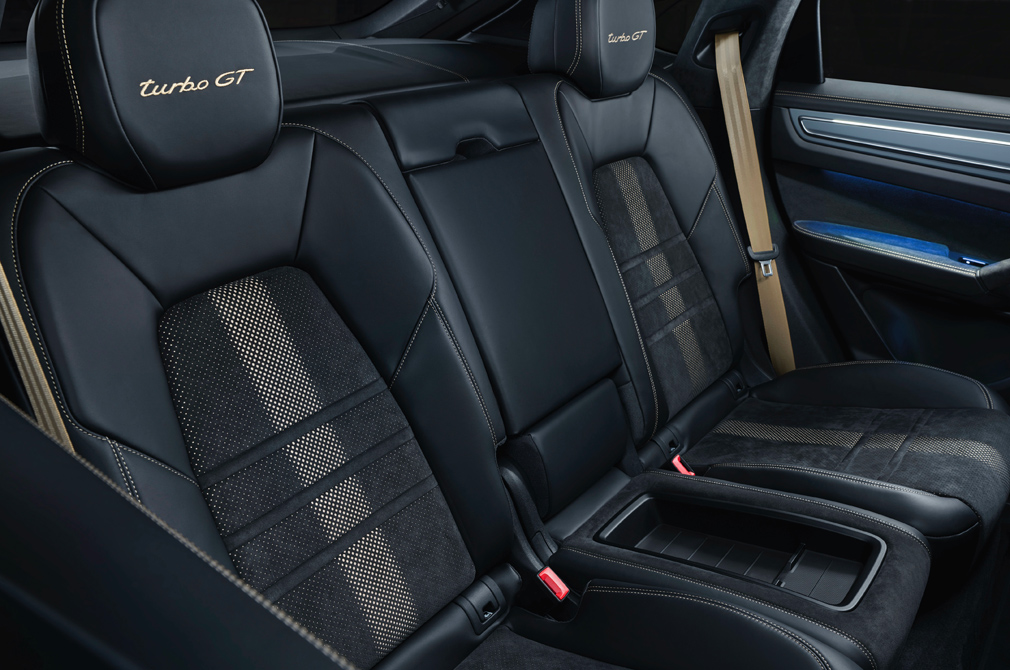 All seats get their centre panels in Alcantara, with ‘turbo GT’ lettering on their headrests.