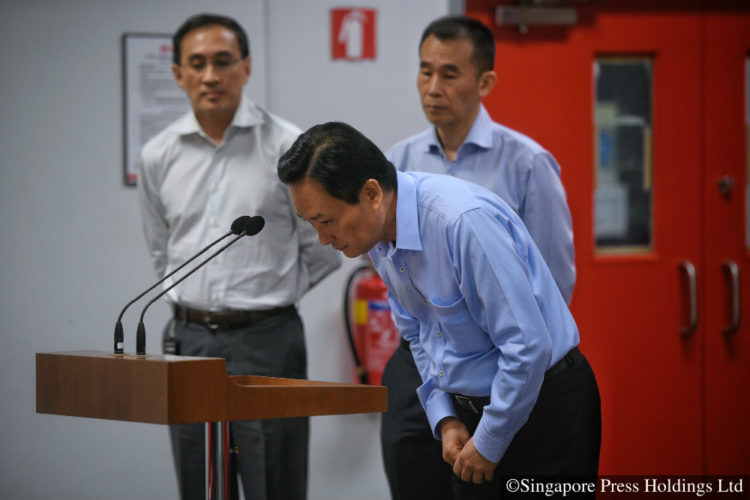 The recent flooding incident which left part of the North-South Line inoperable for 20 hours was “preventable” and the SMRT team in charge of maintaining the anti-flood measures “has failed us”, Transport Minister Khaw Boon Wan said on Monday (Oct 16).

He made the comments during a press conference together with officials from the Land Transport Authority (LTA) and train operator SMRT which runs the North-South Line.

Investigations found that a storm water pit in the tunnel between Bishan and Braddell MRT stations – designed to collect and drain out rainwater – was likely close to full before the recent flooding incident which affected train services on Oct 7 and 8.

It was also found that due to a lapse in maintenance, sludge and debris had accumulated in the lower compartment of the water pit, which could have affected the operational capabilities of pumps and float switches.

The float switches, which trigger the pumps, were to be inspected and maintained in September, but had been postponed as the maintenance team claimed it could not get a slot for track access during engineering hours.

The failure of the float switches resulted in water flooding the tunnel between the at-grade Bishan station and underground Braddell station.

Mr Khaw told reporters at the briefing: “The Saturday incident, (on) October 7 evening, was preventable. It should not have happened. We are all sorry that it did… Our findings is that the anti-flooding system there had been poorly maintained… The SMRT team in charge of maintaining the anti-flood system at Bishan has failed us.”

Mr Khaw added: “Basically, MRT tunnels are designed to handle our weather, and can cope with very extreme storms, far more severe than what we experienced in the last two weeks… (The) bottomline is that MRT tunnels should not be flooded. Full stop.”

The LTA shared that the storm water pit at Bishan has a capacity of over 5,000m3 – about two Olympic-sized swimming pools – and can hold about six hours of continuous heavy rain. Based on the amount of rainfall in Bishan on Oct 7, the water pit – which should have been empty – would have been only about 13 percent full.

The water pit was also equipped with three water pumps, that could each pump out 85 litres of water per second, but these were not activated due to the faulty float switches.

From now on, SMRT said that it will conduct checks on water pumps and flood sensors more rigorously and do so on a monthly basis. Previously, it inspected these flood protection measures every three months.

The flood-prevention devices at this section of the rail where the incident happened were last inspected in June.

SMRT added that it will work with the LTA to improve the design redundancy of these flood prevention measures, which include additional radar sensors to activate pumps.

Besides alerts being sent to the operations control centre, SMS messages will also be sent to SMRT staff when the water in the storm pit reaches a certain level.

SMRT chairman Seah Moon Ming said: “We are very sorry for the Saturday incident and the inconvenience caused to commuters. We are conducting systemwide checks and accelerating our replacement of all ageing and replaceable components where necessary.”

Mr Khaw said that before the Oct 7 incident, he had been looking forward to the month of October, because of several “good things” happening in Singapore’s transportation scene.

This included the stabilising of the North-South Line’s new signalling system, which went into full testing in May; the signing of several regional agreements at the recently-concluded Asean Transport Ministers Meeting; and the upcoming opening of the Downtown Line 3 on Oct 21.

“It (the Oct 7 incident) upset the tempo and it pushed back the recovery of public confidence in us,” Mr Khaw added.

As a result of the flooding, NSL services on both bounds, between Ang Mo Kio and Newton MRT stations, were down from 5.30pm on Oct 7, and resumed only at 1.36pm the next day, as water had to be pumped out from the tunnels before trains could pass.

More than a quarter of a million commuters were affected by the disruption.

During Monday’s briefing, the LTA also explained the reasons behind a track fire which occured between Raffles Place and Marina Bay MRT stations on Oct 7, roughly around the same time the flooding took place.

The unrelated incident resulted in train services on both bounds between Marina South Pier and Newton MRT stations being disrupted for more than three hours.

The fire was caused by arcing, or an electrical discharge that jumps across a gap in a connection, the LTA explained.

This resulted from a difference in potential between two items on the tracks – a concrete bed screw which was earthed, and the base plate of a point machine, that was connected to the running rail. The running rail carries the return current from the power-supplying third rail.

The concrete bed screw involved was non-functional and was left in place after the point machine, which is used by trains to change tracks, was upgraded in 2003 by SMRT.

Arcing does not typically occur between the concrete bed screw and the baseplate, but in this case, a built up of foreign material over time, such as rail grindings or brake dust, caused a “flow path of current” between the two components, said LTA.

“Once the flammable materials are burnt off… the arcing extinguishes by itself,” said LTA.

There are more than 100 of these concrete bed screws, which are found at point machines in tunnels. SMRT said that in response to the arcing incident, it will install temporary insulation covers on all such screws by the end of October.

SMRT added that it will progressively remove all such screws by the end of December to eliminate any future risks.