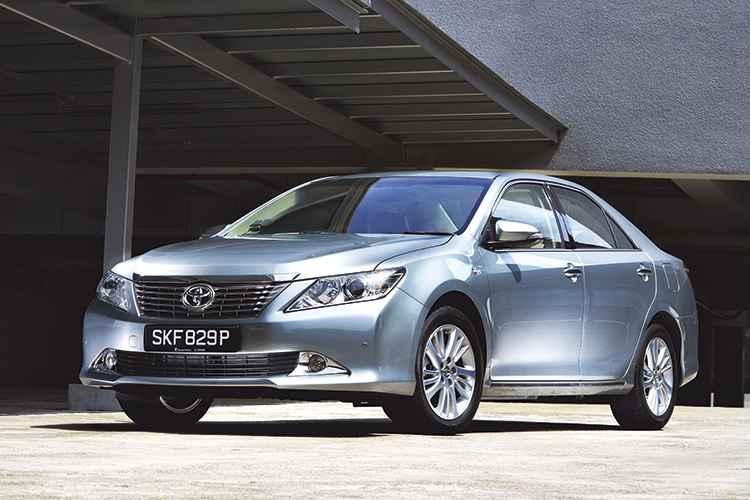 After much thought, Camry designers still created a conservative suit – with flashes of chrome, not brilliance.

The bedrock of Toyota’s success in Asean is VCAC – Vios, Corolla Altis, Camry. Respectively the small, medium and large models that have been driving the company’s passenger car business in this region, these made-in-Thailand saloons are popular bread-and-butter products for the Asean everyman.

Toyota’s grand plan is to keep him “within” the trusty triumvirate – he would buy the Vios as a young man, trade it in for the Altis after settling down, and upgrade to the Camry when he reaches middle age. If the everyman in question does well in life, hopefully he gets his first Lexus. 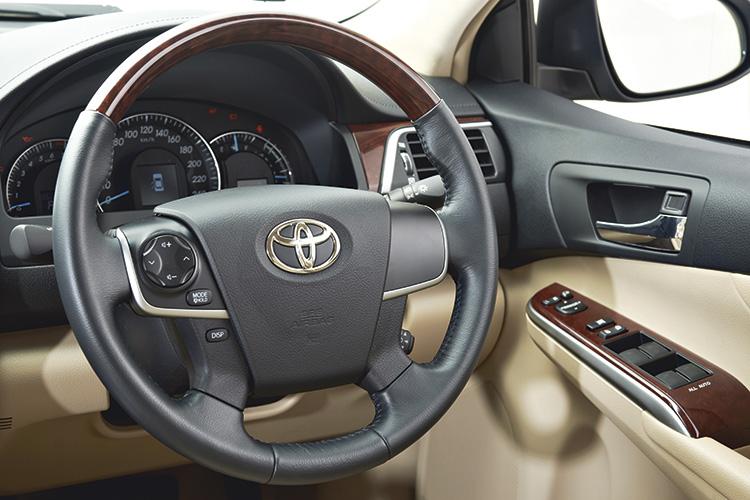 The wood on the wheel rim is fake, but the wooden steering response is real.

Toyota has always maintained a substantial gap between the Camry and the most affordable Lexus saloon – in terms of pricing, amenities and overall quality. In the case of the latest Camry 2.5 you see here, it is $50k cheaper than the entry-level Lexus IS250 and less well-assembled (details later). But the new Camry’s equipment is actually decent.

The standard items include “smart” entry/exit, push-button engine ignition, auto xenon headlights, rain-sensing wipers, dual-zone climate control, a powered driver’s seat, one-touch electric windows all around and a 6.1-inch multi-function touchscreen for the hi-fi, navigation and reverse parking camera. Although not everything listed is a novelty to the loyal Camry owner, the integrated infotainment system should be quite a newfangled gadget for him. 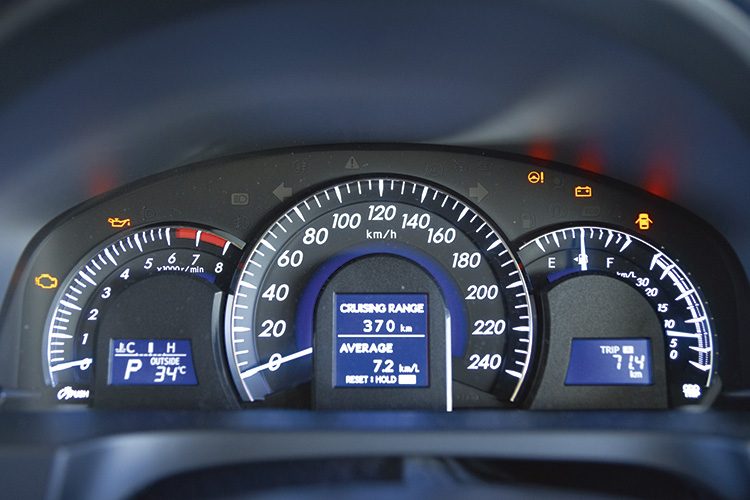 There is also factory-fitted leather upholstery, beige like Handyplast to match the rest of the cabin. Still a mismatch with contemporary good taste is the faux wood decor, but it is exactly what the local “uncle” demographic desires. 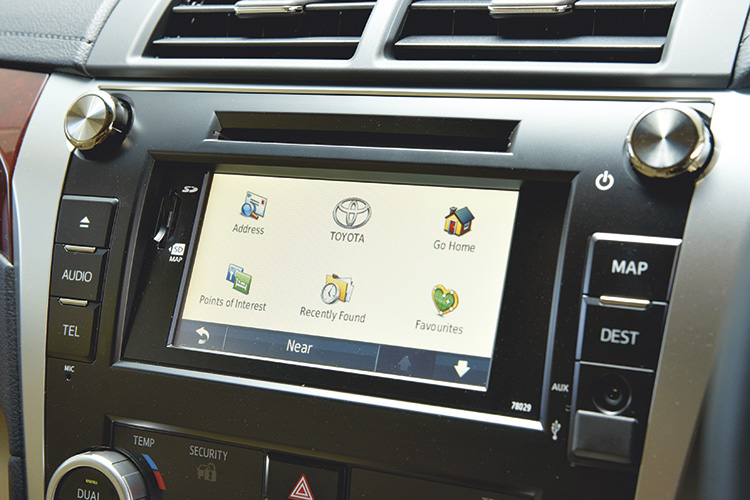 The car is also compliant on the road, yielding gently to bumps and submitting softly to tortured tarmac. The suspension is almost sponge-like in the way it absorbs the worst patches of asphalt, and the whole vehicle is very quiet when going slowly or idling. Any quieter, and Lexus customers might start feeling short-changed.

The rest of the driving experience is classic Camry monotony – slowcoach steering and “sleeping car” handling. Even the throttle and brake pedals feel like they’re snoozing underfoot. The sizeable steering wheel, with its waxy leather wrap and slippery topside wood, tends to discourage enthusiastic twirling. But with this saloon far more likely to tackle three-point turns in the HDB heartland than Turn 3 in the F1 Singapore Grand Prix, nobody really needs it to negotiate corners with gusto – certainly not the relaxed uncle using his wrist to steer his relaxing Camry. 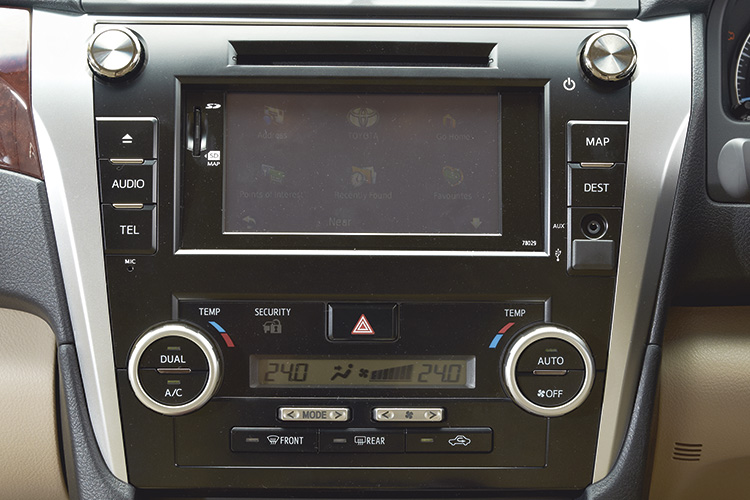 Dull design of dashboard doesn’t detract from its user-friendly features and day-to-day practicality.

If he feels like rushing from junction to junction for no apparent reason, the 181bhp 2.5-litre 4-cylinder is happy to oblige, albeit in a vocal manner. There is enough low-end torque for a prompt departure when the traffic lights turn green, and the mid-range power is always ready to do overtaking work. The 6-speed automatic delivers velvety gearchanges, even when ordered to kick down quickly into a lower ratio, and there is a side gate now for some DIY shifting, but the lever action is jagged. 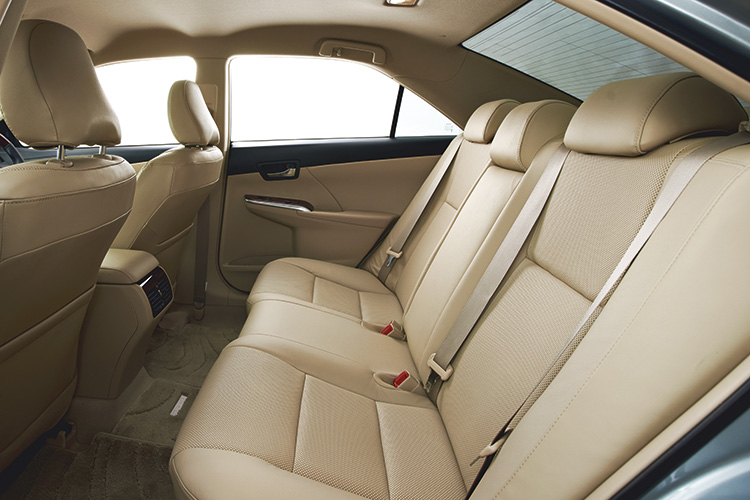 There is one clear message from this unexciting cabin to any “uncle” within earshot: “You complete me.”

Also rough around the edges is the Camry cabin. Compared to a modern Lexus saloon, the switches are rather low-rent and the various compartment lids feel flimsy. The upper grab handles just flop back into place, unlike those in a Lexus that do the slo-mo glide thing. And the Camry’s boot comes from some bargain basement in Thailand – the hinges are made of plain industrial metal, numerous wires have been left exposed, and the interior light is a miserable little bulb protected by a laughable plastic cage. Maybe most of the car’s illumination budget went to the cabin’s tasteful ambient lighting. 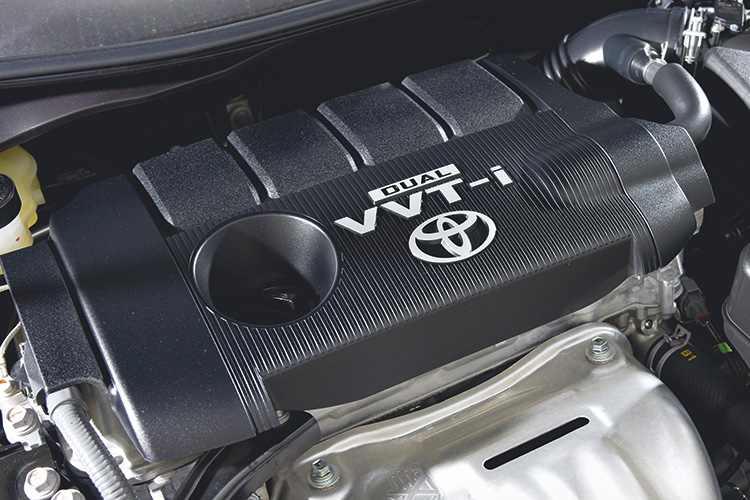 The boot is very roomy though, just like the glovebox – gloves, books and magazines can go missing in either “storeroom”. There is also plenty of space for passengers, especially the two or three on the plush back seat. They would need to be in a Lexus LS limo if they want even more lounging space. This being a Toyota, the air-con system can recreate a winter wonderland in any scorching hot locale, be it Bangkok or Buangkok. 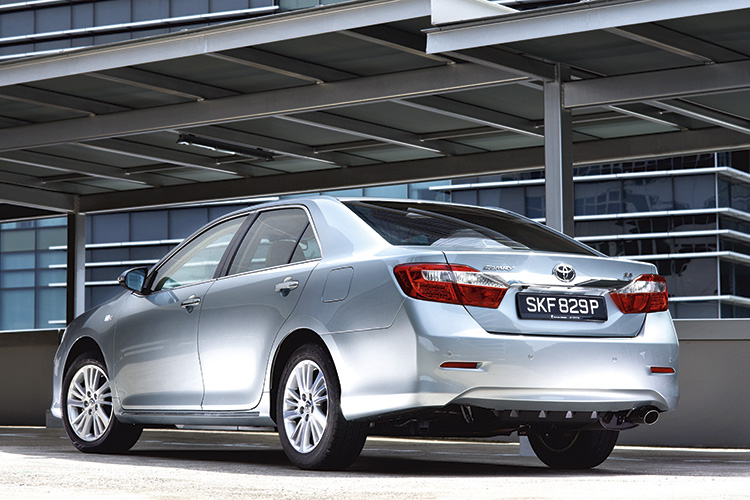 Here at Torque, I don’t know whether the Camry development team exchanged notes with their colleagues in the automaker’s upmarket division, but the new model could pass off as a modest Lexus for the masses. “Uncles” should celebrate – down at their favourite kopitiam, of course.

Grab passengers won’t be allowed to use front seats
This site uses cookies to help us serve you better. By continuing to explore our site, you accept our use of cookies.I Accept