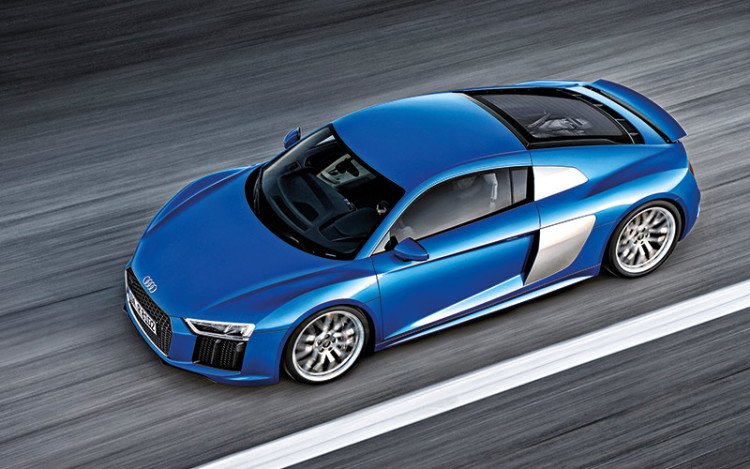 If Audi’s original R8 was the luxury marque putting out feelers in the high-end sports car market, the new second-generation model is Audi marking its territory. Because in the eight years since the first R8 appeared, the German number has established itself firmly as a genuine member of the club, standing toe to toe with Ferraris, Lamborghinis, McLarens and top-of-the-line 911s.

The formula remains exactly the same: cab-forward, mid-engined two-seater, built around a spaceframe and with all-wheel-drive. Audi has done nothing radically different with this second-gen model, but has improved it incrementally in every way.

Take a look, for instance, at the car’s spaceframe that forms the “skeleton” onto which everything else is hung.

Instead of being cast solely from aluminium as was the case before, it is now crafted from a mix of aluminium and carbon fibre-reinforced polymer (CFRP).This shaves 10kg off the weight of its predecessor and, critically, also makes the structure 40 percent stiffer. The exterior body panels cladding that spaceframe are all-aluminium, as before.

The 5.2-litre V10 powerplant makes a reappearance, in two states of tune. The “base” version in the standard R8 V10 delivers 540bhp and 540Nm of torque, while the one in the R8 V10 Plus ups the stakes massively with 610bhp and 560Nm. That latter set of figures, incidentally, is exactly what this same engine delivers in the R8’s sister supercar, the Lamborghini Huracan. 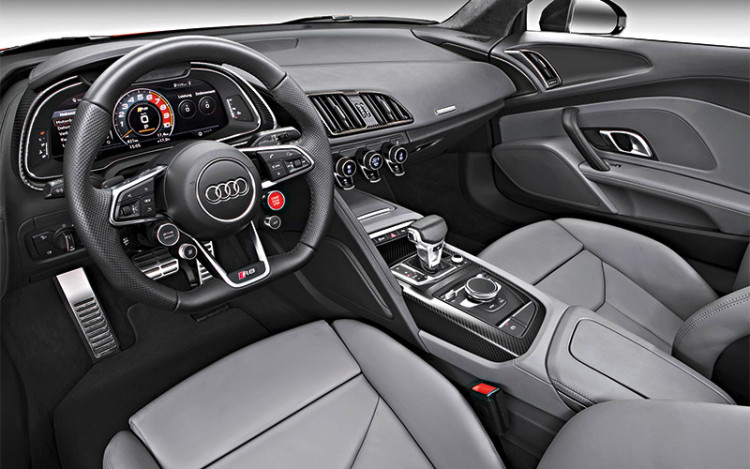 It revs to a thrilling 8700rpm, and delivers a hair-tingling soundtrack that morphs from serrated throb at low revs to hard-edged track-car howl at the top end.

In a nod to the greenies, automatic stop-start now features on the car, as well as a “coasting” mode that disengages the clutch and drops the revs to idle when you lift off the throttle pedal at cruising speeds.

The 4.2-litre V8 from the old R8 isn’t offered in the new model. Still, it’s very likely that a V8 version will appear at some point, although the Audi chaps at the launch were tight-lipped about this.

The styling has been sharpened, literally, with more angular and wedge-shaped head- and tail-lamps, squarer and more aggressive front bumper intakes, and a more jutting grille with chamfered top corners in the latest Audi fashion.

The car looks even more “cab-forward” now, with the glasshouse sitting slightly further forward and the rear deck more gently sloped and stretching further back. As before, there are contrasting coloured “sideblades” running vertically down the flanks just behind the doors, although they are now interrupted by the coupe’s shoulder line, where the earlier ones were continuous, one-piece items.

General proportions and overall dimensions remain very similar to the previous R8’s, but the new model is a touch shorter, lower and wider. All in, it’s a clever and sensitive design update, the newcomer looking more spectacular than ever without dating the predecessor.

Audi is especially proud of the new headlamps. They adopt the all-LED technology of the outgoing R8 V10, but add laser high-beams to their arsenal. 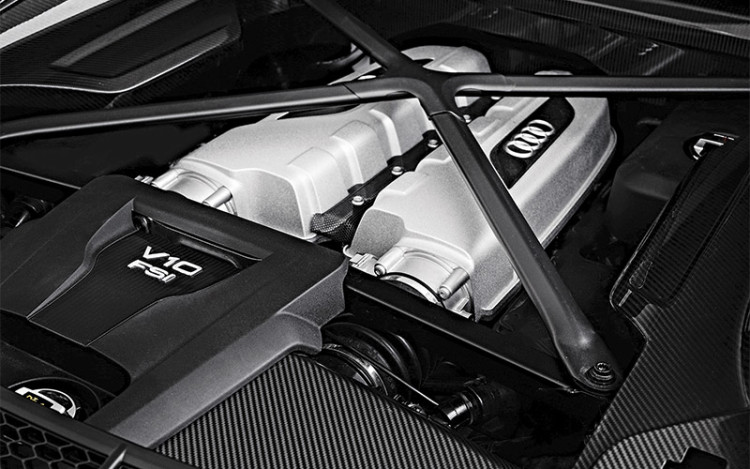 Those headlamps are brilliant – in both senses of the word. Apart from casting a bright-as-daylight beam hundreds of metres into the distance, they switch themselves off when the sensors detect an oncoming car or when speeds drop below 40km/h, and turn themselves on again above 60km/h.

As with the styling, the cabin of the new R8 is the result of gradual evolution.

The “monoposto” layout, which angles the centre console towards the driver and puts all essential controls within his reach, remains.

The instrument cluster is now a “virtual” TFT one, as first seen on the recently launched Audi TT. Sat-nav and multimedia information now appear there instead of on a central screen, and the display can be configured to prioritise either the sat-nav map or the rev counter.