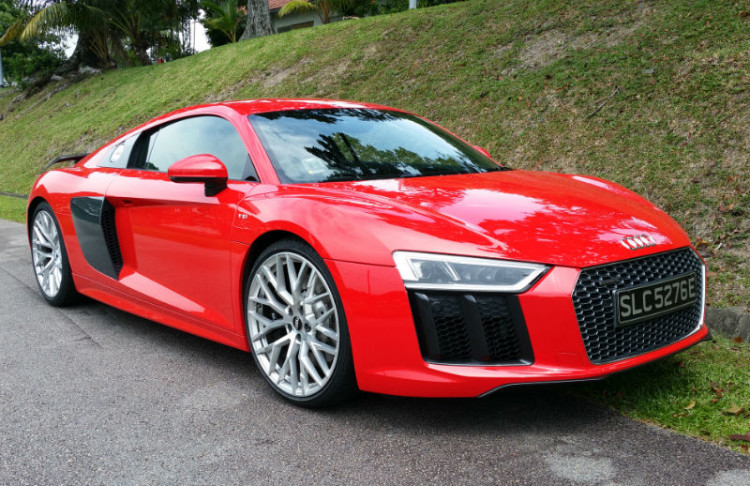 Is it possible to enjoy a car like the Audi R8 within city speed limits?

To find out, I set the speed warning of Audi’s 320km/h second-generation supercar at 60kmh. But more about this later.

The car comes with a suite of steering-mounted controls, which makes accessing an endless array of functions – including its new drive modes – as easy as twiddling your thumbs. But to a pre-PlayStation dinosaur like me, the steering wheel looks as complex as Lewis Hamilton’s race-day ride.

The cockpit incidentally is where many of the R8’s new features are found. Besides those starship steering controls, you will see a row of drink dispenser-like switches for the climate control. Very cool.

The handbrake is gone. In its place, you get an electronic system with self-release. The pilot’s seat comes with more adjustments. It is, by the way, a very comfy seat.

In fact, the car is surprisingly comfortable on the whole. The cabin is plush and its ride offers an impossible blend of stiffness and yield. Going over speed regulators no longer feels like having a chair pulled from under you.

It is also an exquisitely well-built interior, with not a squeak or rattle despite the sporty suspension.

If there is one quality which separates this R8 from the last one, it would be refinement. And in the supercar league, refinement is often elusive.

The car does not look very different. Those trademark side blades are now presented in two parts, so the muscular curves of the car’s rear quarter come across more clearly. The angled grille is now in line with Audi’s new look. A rear spoiler (optional) ups the aggression quotient, while trapezoidal tailpipes lead your eyes to prominent diffusers hinting at the insane speeds this well-tailored monster is capable of.

Hit the start button (on steering) and the car’s V10 comes to life with a delicious roar. If you do not like your neighbours, tune up the exhaust note with a touch of another button – yes, on the steering too.

Pull the luxurious shift lever to D and squeeze the throttle. The moment you turn out of your parking space, you feel the car’s specialness at once.

Every steering input is met with a response you would expect of a Lotus Elise, not a car built like a small catamaran. It is a lovely feeling to be able to have this intimacy with something that should rightly be intimidating.

As the tarmac clears up a little, you plant the pedal and the V10 thunders with approval. But all too quickly, you hear a chime – the speed warning.

You ease off and see the cars you left behind catch up. It is frustrating to see them pass you, especially that Jazz with the Pikachu sticker.

You let the speedometer drop to 45km/h before revving up again. The R8 catapults ahead and then chimes.

This is not working. You twiddle your left thumb and raise the limit to 70kmh. (Hey, this is not as difficult as I thought.)

At the lights, you blast off. Now, this is more like it. You pull away with a smile. Then you look down and see – yikes, 95km/h. The chime is unnoticed because of the engine roar.

You ease off and let Pikachu pass again. Conclusion: It is near impossible to drive a 320km/h car at city speeds without going a little bonkers.