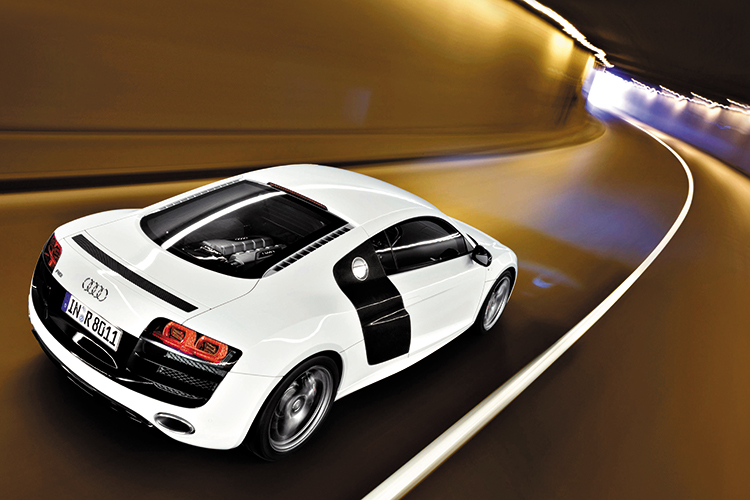 Surely they could have done better.

I’m not talking about the car itself, but the name it’s been saddled with.

Audi has created an extreme 525bhp, V10 version of its iconic, world-beating mid-engined sports car, but has dispassionately chosen to refer to it as the R8 5.2 FSI Quattro.

Something so extraordinary ought to have an appropriate loin-stirring name.

But say “R8 5.2 FSI Quattro” and you might as well be talking about your new washing machine.

It deserves a punchier, more memorable tag. We (as well as the rest of the motoring world, we’re sure) will simply call it the R8 V10.

And what effect has the addition of this simple alphanumeric suffix done to the aluminium-bodied R8, already one of the world’s best sports cars?

Visually, not that much.

The grille stakes are now chromed (that’s how Audi likes to distinguish the “hot” versions of its model ranges) and the air vents under the headlamps and tail lamps now have fewer slats than before. 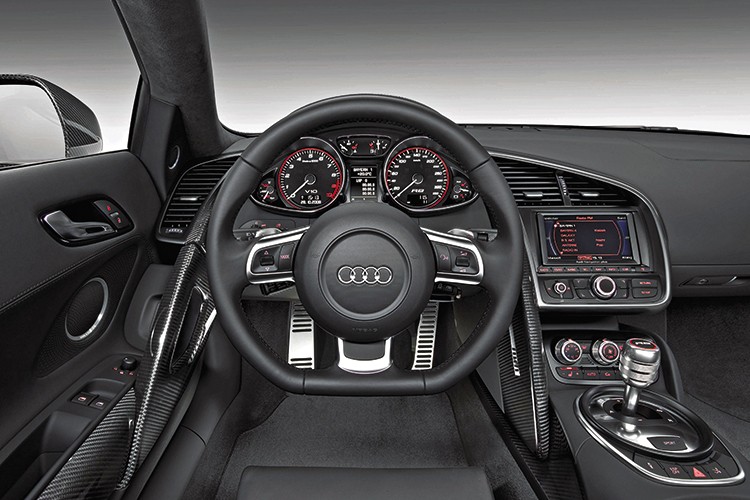 R8 V10 is differentiated from V8 R8 with red lining around the dials.

The R8 V10 rides on newly styled 19-inch rims with distinctive Y-shaped spokes, and the bodywork surrounding the rear number plate is now black instead of body-coloured.

Also, while the vertical “side blade” that runs down the rear flank of the standard V8 R8 is a flat panel, it flares outwards on the R8 V10 to form a more gaping air scoop for the side radiators.

Oh – and this is a world first – the R8 V10 employs all-LED headlamps whose hue closely resembles daylight and whose bulbs last a long, long time.

Inside, there’s even less to differentiate it from the standard car.

There are red rings around the main instrument dials and on the top of the gear knob.

What really makes the R8 V10 special is, of course, the engine.

It’s a 5.2-litre 90-degree V10, derived from the Lamborghini Gallardo. 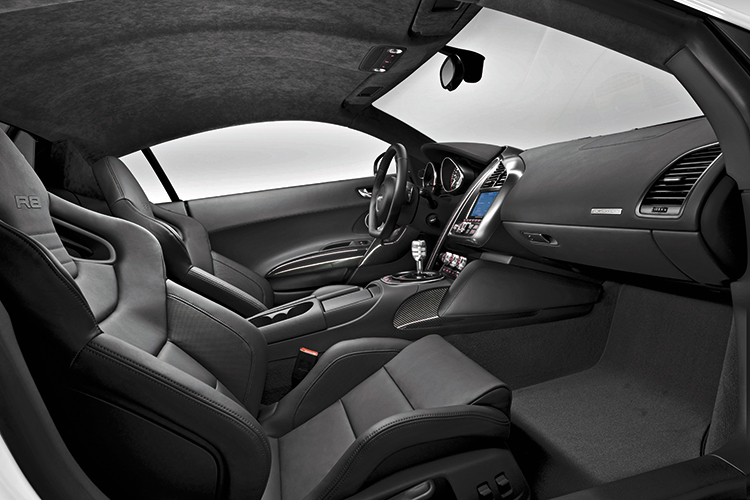 Plenty of colour options for the interior but business black is best.

It also boasts an avalanche-like 530Nm of torque at 6500rpm.

But even more significant is that fully 80 percent (over 400Nm) of this is available from just 1000rpm!

Impressively, the R8 V10 weighs only 60kg more than its V8 R8 stablemate, so the power-to-weight ratio climbs from an already-mighty 269bhp per tonne to 324bhp per tonne.

Like the standard R8, power is channelled to all four wheels via either a 6-speed manual transmission or an R tronic automated manual box.

Time to drive, then.

The R8 V10 feels pretty normal at first. At idle or cruise, the engine is more muted than you’d expect.

There isn’t the sharp-edged bark and crackle of a Gallardo.

On this manual car, the clutch is light and it eases away without your even having to touch the throttle.

There’s simply immense but linear pulling power from any revs, in any gear. 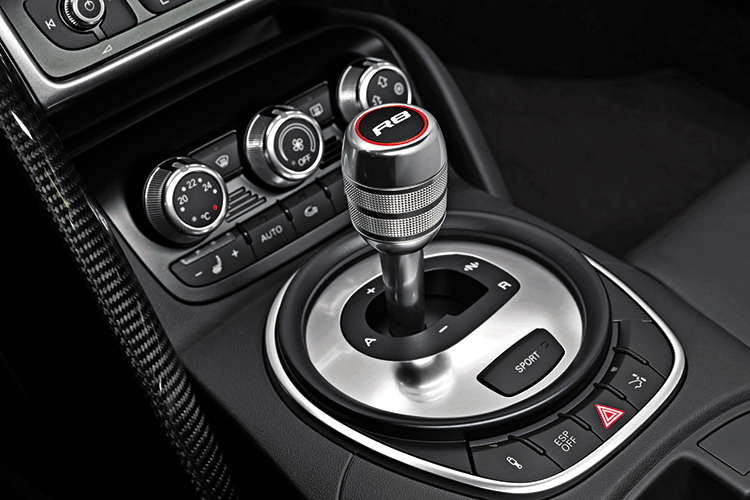 Automated manual is better behaved at low speeds in the R8 V10 than in the V8 R8.

The gearing is quite tall – second would take you well into three-figure speeds – but nevertheless you can leave it in a higher gear than usual and just surf along on the massive torque.

There is none of the other aural histrionics associated with supercars – road noise is very subdued despite the massive tyres, and wind noise is kept to a whisper.

It’s been said that the R8 is a car your granny could drive to the wet market – and it’s absolutely true.

Your granny would approve of the car’s low speed composure, too.

The ride is taut yet beautifully controlled. Small bumps are smoothed over with ease.

And there’s an overriding sense of utter integrity about the car’s chassis.

It’s got electromagnetic adaptive dampers as standard, which can be stiffened at the touch of a button.

The ride becomes noticeably lumpier in this mode.

So when in town and over broken tarmac, it’s best to leave the dampers in their normal setting. 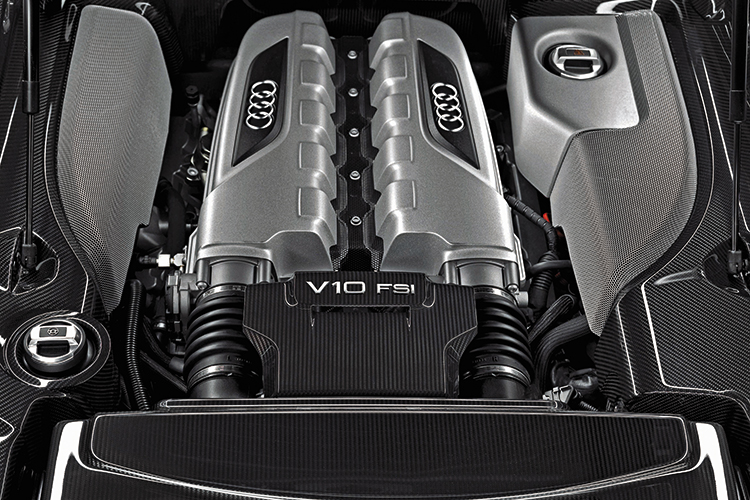 And when the road finally opens up and you shift the throttle, the engine note instantly becomes more urgent.

At 4000rpm, the engine morphs from a low-rev throb into the most exhilarating bellow, which escalates in intensity as you close in on the redline.

The already impressive low-rev urge suddenly turns into massive thrust as the mighty engine whips through its mid-range, and culminates in sheer acceleration violence as the needle crosses the 8000rpm mark.

The R8 V10 is stunningly and blindingly quick.

Over the swift, undulating mountain roads of the launch route in southern Spain, the R8 V10 was magnificent.

Explosive acceleration is a given, of course.

But even more astounding is the way the R8 V10 storms through entire sequences of bends, utterly secure even at mind-boggling speeds and (with the adaptive suspension’s “Sport” setting activated) almost without body roll.

Grip is immense and almost impossible to breach on the public road. Self-preservation instincts will kick in well before roadholding runs out. 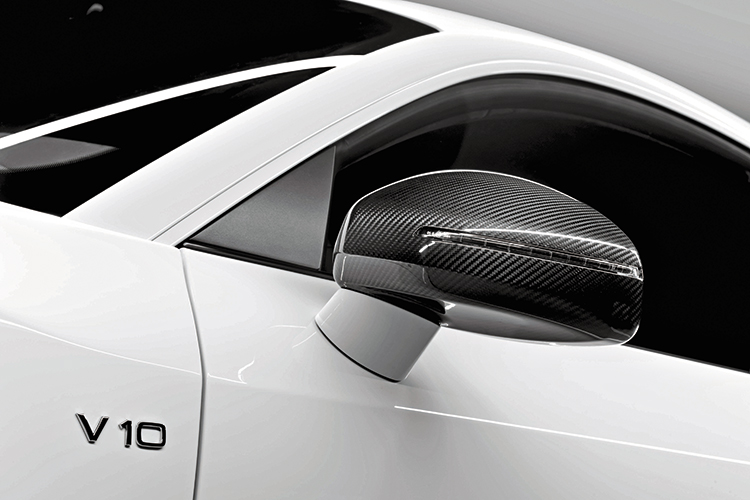 The chassis has a 44:56 front/rear weight bias, and this is evident in the way the R8 V10 attacks bends with seemingly no front-end inertia.

While the R8 V10 is all-wheel driven, it’s very rear-biased.

Typically, about 85 percent of the power is channelled to the rear wheels, unless they start to lose grip.

This, coupled with the resolutely planted front end, allows you to race towards a corner, point the nose in and then adjust the car’s attitude with the throttle.

On tighter turns, you can induce some very mild understeer, but only if you absolutely charge in at death wish speeds.

Response to steering inputs is immediate, slack-free and satisfyingly linear.

There isn’t the amazing dart-like feel you’d get in, say, an Elise.

But that’s more an observation than a criticism; this is, after all, a supercar, not a go-kart.

There’s enough steering weight to impart a nice touch of resistance on bends. 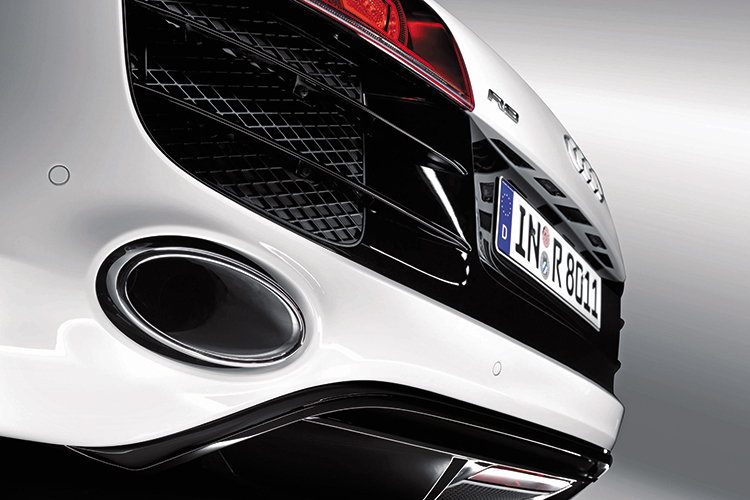 A pair of purposeful oval pipes expels the spent air.

And as you swivel the wheel further, there’s a deliciously tactile increase in that resistance.

There’s a good feel coming through the rim as well – not the endless chatter you’d get at the helm of a 911.

But the R8 V10’s wheel stiffens and lightens enough through corners to keep you directly keyed-in to surface conditions and the state of the tyres’ grips.

Carbon-ceramic brakes are optional but are best avoided. Our test car had them and they were nasty.

There’s a disconcerting degree of dead travel in the pedal movement, before the brakes abruptly bite and the car lurches.

Get the brakes heated up with prolonged hard use, though, and things do get better.

However, even belting down the tortuous mountain route, we found it difficult to keep it up to temperature; in normal driving, it would be practically impossible.

The standard steel brakes are far more progressive while being no less effective.

Part of the launch programme included a session at the fast but endlessly meandering racetrack at the Ascari Race Resort near Ronda, and five on-the-limit, hard-braking laps failed to induce any hint of fade in the stoppers.

Mention must also be made of the optional R tronic semi-auto gearbox. 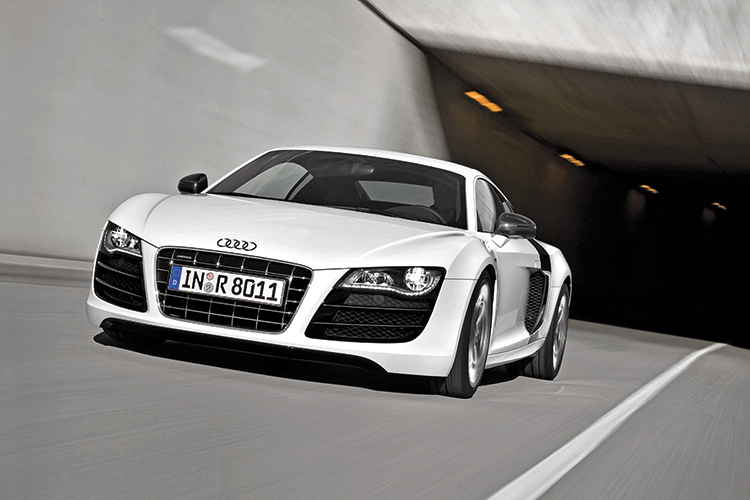 R8 V10 is the first car to use LEDs for the main headlight beam.

In essence, it’s a clutch-less manual with sequential shift.

I detest such systems and prefer the involvement and simplicity of a good manual box.

And make no mistake, the manual box on the R8 V10 is a fabulous one.

It’s got a swift, slick throw, and the open gear change gate on the centre console tunnel is incredibly evocative.

But no manual change, no matter how good, could ever have allowed me to tackle that mountain pass like I did in the R tronic-equipped car.

Hurtling from bend to bend, I was changing up and down the box literally every second, with the revs blipping and echoing off the roadside’s rock faces with every perfect downchange.

And at such speeds, round unsighted bends and with the ever-present likelihood of oncoming traffic, the ability to flick up and down the box via the steering-mounted paddle shifters – while keeping both hands on the wheel – was invaluable.

Activate the “Sport” button behind the shift lever and gear changes become even quicker, but more pronounced. 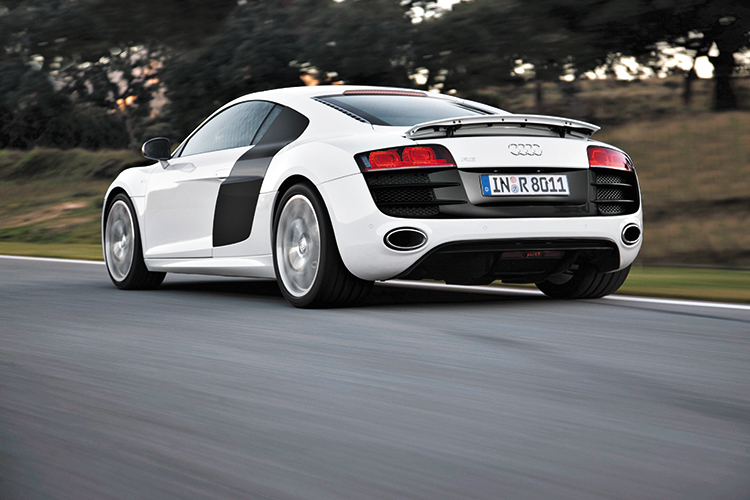 It would have been humanly impossible, I dare say, to change gears with the instantaneous and unerring accuracy of that gearbox.

On the right roads, the R tronic makes you feel like a hero.

But what about when you’re on the wrong roads?

Semi-auto gearboxes are notoriously uncooperative in urban traffic, lurching and hesitating when you just want to waft about.

It is so even in the R tronic of the standard R8, it’s a surprise to find things quite different on the R8 V10.

The gearbox’s software must have been re-jigged because in self-shifting “auto” mode, the car moved off smoothly and gear changes were acceptably slurred. 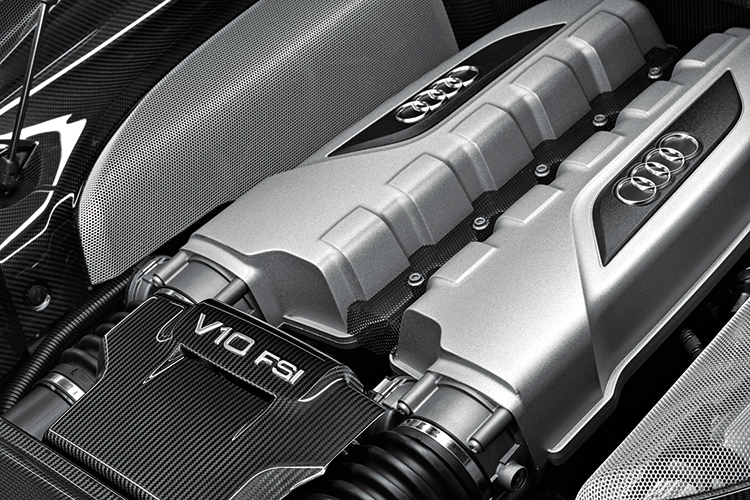 It still helps if you lift the throttle slightly between gear changes, but the R tronic is now a perfectly viable tool in town.

With this car, Audi has somehow improved on near perfection.

The R8 V10 goes faster, sounds nicer and is a more exhilarating drive than its V8 kid brother.

It also costs considerably more (expect a price tag in the region of $600,000 when it arrives here later this year), but every cent of that extra outlay would be money well spent.