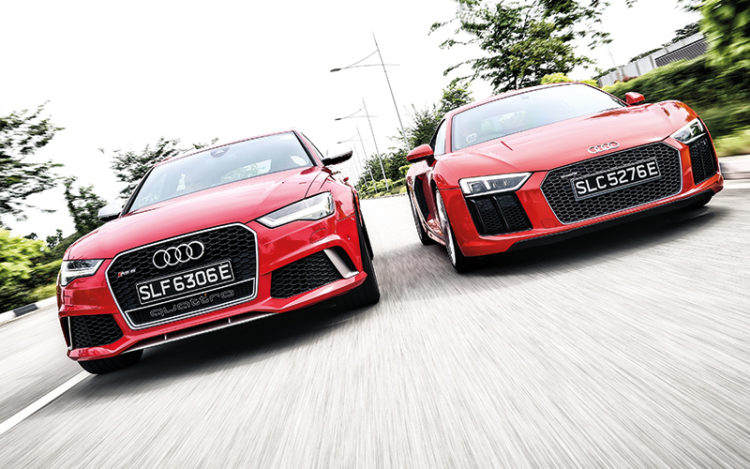 Unlike the Italians, who like you to think their cars are soulful beings rendered in carbon fibre, there is no pretence in Vorsprung durch Technik (Advancement through Technology) – Audi Sport makes killer robots.

When Skynet takes over, Audi Sport will be the Terminators’ official automotive partner.

In the meantime, I assault our roads astride a combined 1100 angry German horses – packaged in bright orangey red, audible before they are visible, like thunder portending a hurricane; all in the name of defining just what the RS badge represents.

Upholding the honour of Audi Sport in the crucible of a Torque twin test are the second-generation R8 V10 and an improbably ballistic Ikea hauler, the RS6 Avant V8. 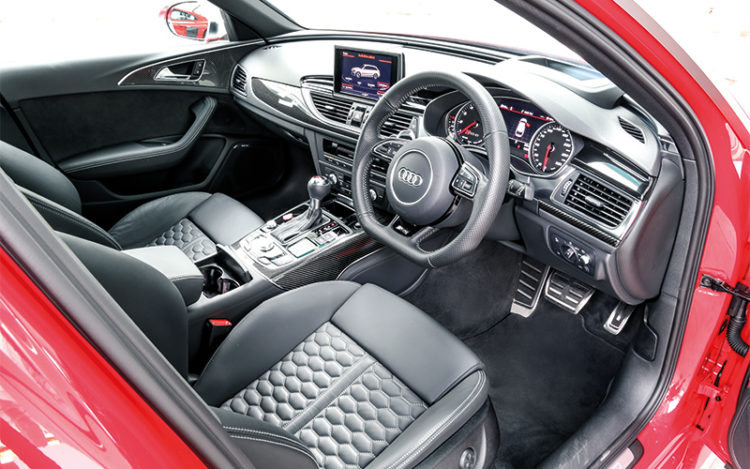 Of course, I start with the mid-engine supercar. The original R8, for all its ability to turn heads, suggests a teacher’s pet leaning eagerly forward in the classroom’s front row. The new model for 2016/2017 brings sharper creases, a laser gaze and split B-pillar blades, all subtle changes which instantly feel more at ease with the coupe’s purposeful mid-engine proportions.

Its aesthetic is ultimately familiar, though, and like the rest of Audi’s unabashedly technical range, is further evidence that Ingolstadt’s design centre is staffed not by humans but a superior race of alien androids.

Step through conventional, non-silly doors, and you see Audi’s now ubiquitous Virtual Cockpit dominating the arena. A dashboard display is entirely absent, with all information routed to the instrument binnacle.

My initial fears of being overwhelmed by the sheer amount of info and a daunting degree of configurability turn out to be unfounded, as the system’s functions have been structured logically and do not take long for anyone to learn. 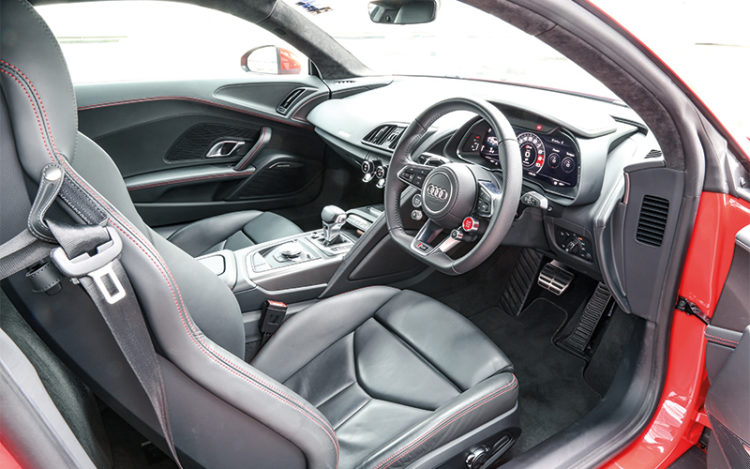 Despite tickling the nerd within, what the R8’s interior does not do is delight the senses like an Italian contemporary or even the Mercedes-AMG GT would.

The first R8 did wonders for the four-ring brand. Beyond giving it a halo image to print on billboards looming smugly over BMW showrooms, it showed the world that, despite a much lower price, an Audi can credibly gallop alongside exoticars from Ferrari and Lamborghini.

Somebody at Audi realised this, of course, and hence the new R8 has sidled up the price range to command an outlay within touching distance of McLaren’s Sports Series.

Justifying that loftier market positioning is the jettisoning of the default 4.2-litre V8 engine in favour of a 5.2-litre V10, fettled to rev from idle to full load almost 20 percent faster than before. 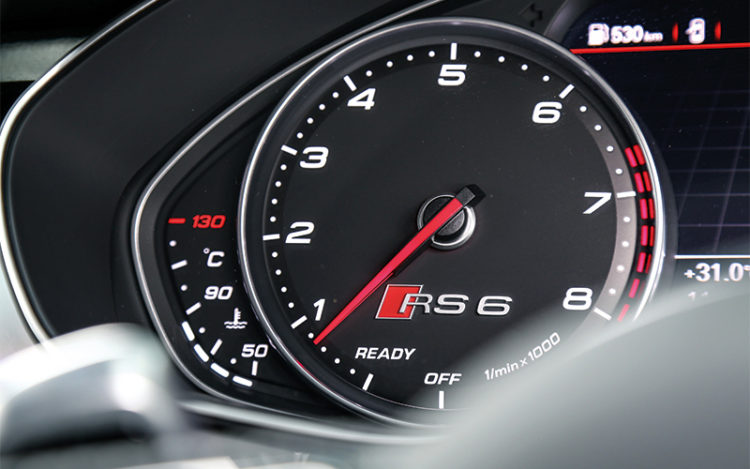 The engine comes in two states of tune: 540bhp for the standard model which we get in Singapore, and 610bhp for the Plus version.

Natural aspiration means a journey round the tachometer of gathering urgency and immediate response, with the last 2000rpm to the 8700rpm redline reaching directly into your brain’s pleasure centres and those of admiring passers-by.

Available via a thumb toggle on the flat-bottomed steering wheel are five drive modes: Comfort, Auto, Dynamic, Individual and Performance, within which further sub-modes for dry, wet and snow are selectable.

Everything is plugged into a reworked quattro drive system that shifts torque around within milliseconds. That is a massive amount of robotic thinking going on between your hands, feet and the four contact patches. 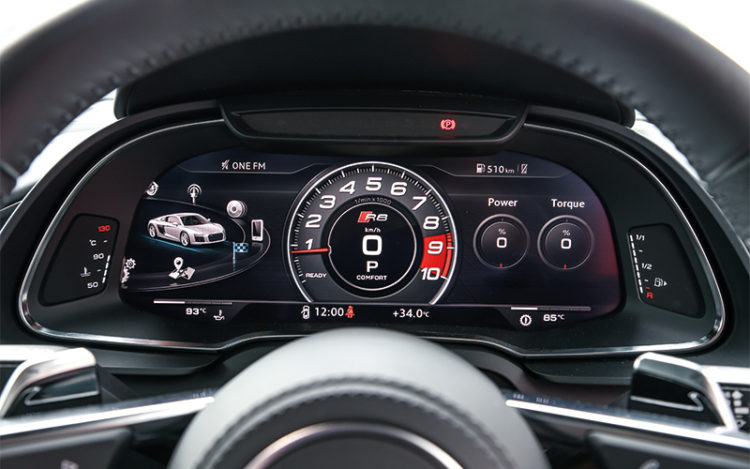 They worked exactly as advertised on a private wet skidpad (at Audi Sport’s headquarters in Neuburg an der Donau, Germany, which I visited last year), with progressive levels of torque-split delivering the right balance of security and adjustability with each incremental drive mode.

While there is enough power to overwhelm all four tyres if applied indelicately, it would take serious provocation to upset the car’s traction on public roads here.

Acute angles at thunderous speeds are thus nonchalantly swatted aside, which is particularly useful as a torque-vectoring means of scampering out of wet junctions in Singapore with your right foot planted to the floor.

The R8’s quattro all-wheel-drive system works intelligently regardless of setting, and at the same time, largely invisibly.

On a racetrack in Germany, where I got to try the R8 V10 Plus, I just about kept up with our pace-setting instructor. The car, for its part, arrests itself with unflinching stability, rotates faithfully and catapults, wailing like an incandescent dragon, out the other side of corners.

Missing, however, is that visceral, balletic sense of effervescence you get in a McLaren 570S. 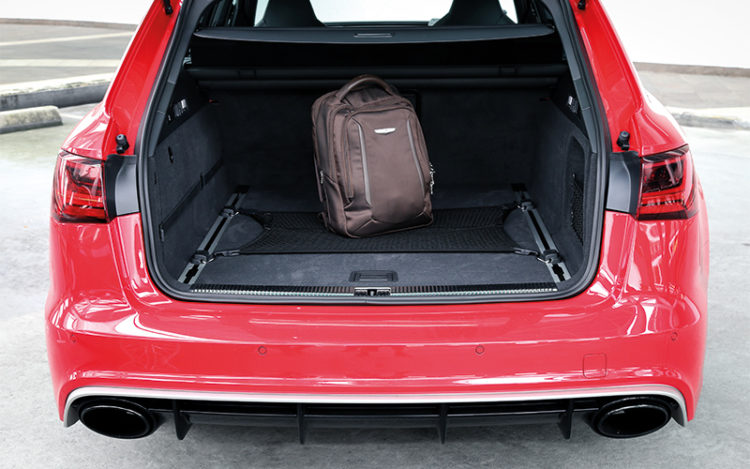 Hence, the defining dynamic quality of the R8 is tenacity of grip, riveted down with computing power.

What this translates into when driving on our city streets is the ability to obliterate slower traffic almost thoughtlessly, even in the middle of a monsoon.

There are downsides to this dauntless ability, of course.

On South Bouna Vista Road, both pedals are effectively forbidden territory – brush the accelerator and you bait the police, and there really is no need to go near the brake pedal. A Lotus Elise, the R8 is not.

The A6’s “C7” model generation has been around since 2010, so the RS6 misses out on Audi’s latest MMI (Multi Media Interface) and the wow-your-friends party trick of the Virtual Cockpit.

You’re unlikely to notice unless you had just come from the R8, however, as all expected connectivity and infotainment features are present and correct, including a decent-sized colour screen between the gauges capable of displaying navigation. 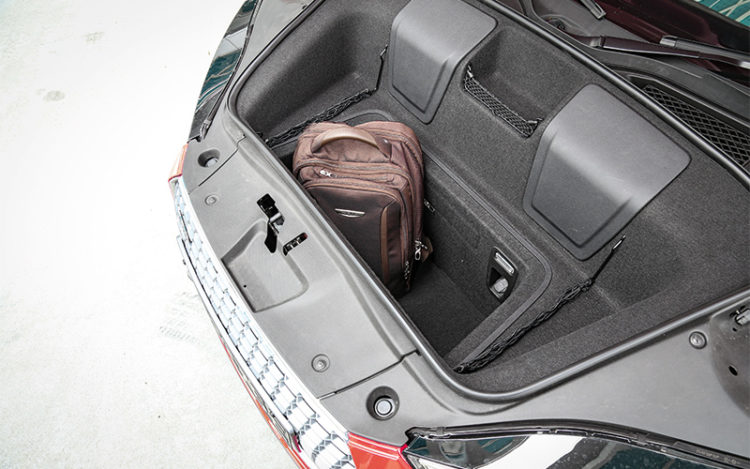 Away from the technology, Audi’s reputation for stylish modernity and spacious comfort remains unsullied.

The pictures in this article will tell you the RS6 is shaped well enough for your family and their flat-pack furniture. The pics will also tell you that without orangey red paint, those silver mirrors and assorted go-faster bits are not enough to make a scene, at least until observers hear the thundering 4-litre V8.

Naturally, I immediately take the RS6 Avant on airport duty and then to lunch with the family, age range up to 87. They liked it.

You’d think something this big and potent would be unwieldy when merely commuting. 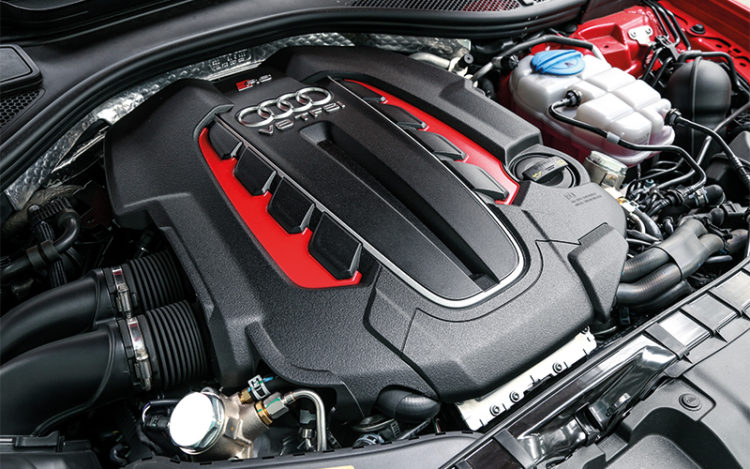 But it turns out the engine and chassis can settle down well enough for nobody’s arthritis to be exacerbated.

Despite a necessarily stiff ride (what did you expect?), there is something to be said for a grand surfeit of power and being spared the extraneous body motions on urban tarmac that something softer and tuned more for “comfort” would impose.

The RS6 is one of the most effortless luxury cars to guide around Bukit Timah Road. But you didn’t come here to read about a limousine service. How a performance car performs is its primary purpose.

I usually discourage judging a car by its spec sheet, but the RS6’s numbers emphatically reflect what my bum can feel – zero to 100km/h in 3.9 seconds, 700Nm of torque from a massive plateau between 1750rpm and 5000rpm. The wagon delivers honestly on every promise.

The throttle response of the new V8, downsized from the previous RS6’s whopping V10, is admirable, if not quite as pin-sharp as in the R8.

Endless torque reserves, however, mean the scenery can be swept aside relentlessly and on demand, in any gear, at any speed.

Larger jolts do inevitably intrude, but of more import is the RS6’s composure in dealing with them mid-corner.

Meet a particularly large bump and the RS6 swallows it whole within its significant wheelbase, politely declining to be sent skittering across the surface.

No upstart boyracer is out-running or out-turning this limo driver, I can guarantee you that.

Not too long ago, you could almost follow a script for reviews of racy Audis – marvel at the quality of the accommodation, remark about the sheer pace and finally lament, gently, at the ultimate lack of flamboyance. 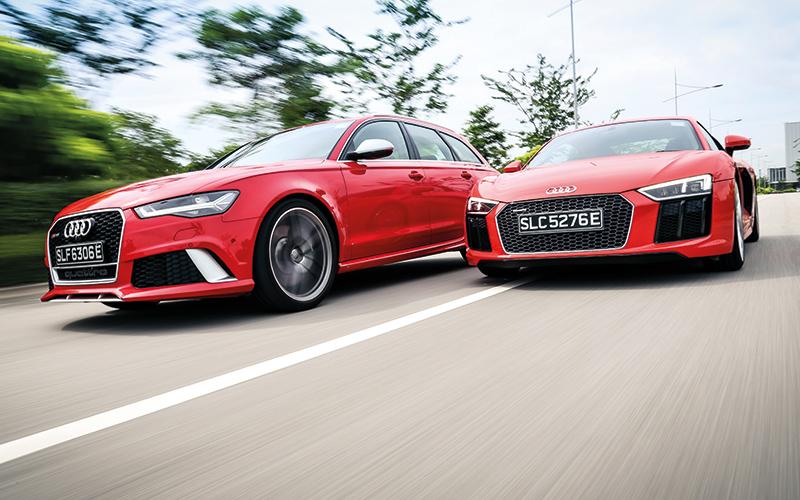 It’s not a particularly scientific test of a brand’s dynamic identity, but do a Google image search of “Audi RS” and the results won’t include photos of a car going sideways in a cloud of smoke.

However, “what are the planet’s best drift machines?” is a profoundly different question to what makes a supercar, or super-estate, enjoyable.

Bombing around in the R8 or RS6 is remarkable for how easy it feels. My wife, who became a general automotive cynic after having her ears decimated and back shattered by the Mercedes-AMG A45 (bless its tortured soul), even quite enjoyed herself in the two Audis.

They are loud, yes, and angry, yes, but everything is perfectly judged to sneak just under the pain threshold, for when you’re not in the mood for a full frontal assault.

It’s like Disney’s Beast – monstrously powerful, monstrously capable, a prince underneath. There are purists who will continue to thumb their noses at these monsters, of course.

Yet, it is hard to argue with properly violent performance which is so remarkably well harnessed. 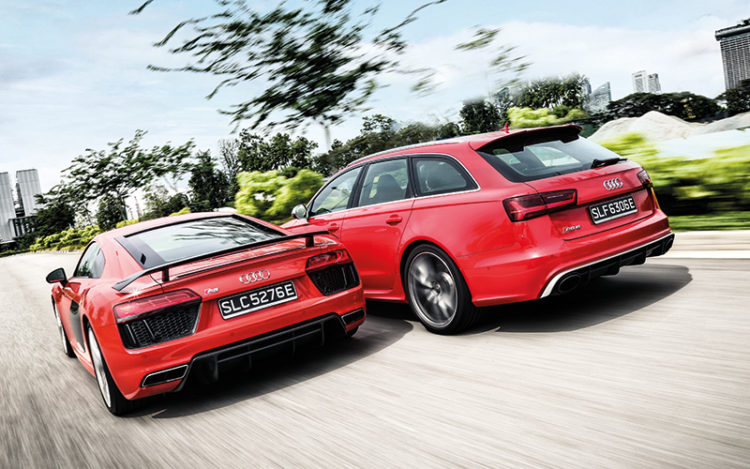 At all speeds, the two Audis even willingly engage in dialogue, telegraphing their attitude with clarity.

There is no shortage of excitement nor interactivity here.

These are fast cars in which you can have a great experience knowing that you’ve pushed yourself to the limit, even if the vehicle’s own is barely approached.

Which one is more exciting? That’s a silly question. Necessarily, a mid-engine supercar has more delicacy and adjustability built-in. So, if your garage has room and your wallet is overflowing with money, by all means buy the R8.

However, in the unflappable, almost nonchalant rapidity of the RS6, there are clear and unmistakable echoes of the R8’s dynamic character.

The RS6 is therefore the solution to the perennial discordance between luxury, practicality and thrills. If there ever is an answer to the question “What is all the car you ever need?”, the RS6 Avant is it.

I bet you didn’t think it’d be orangey red in colour. 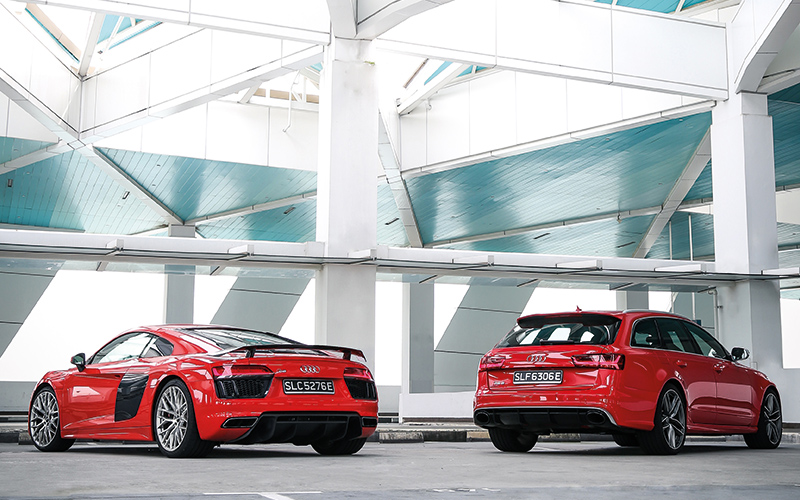