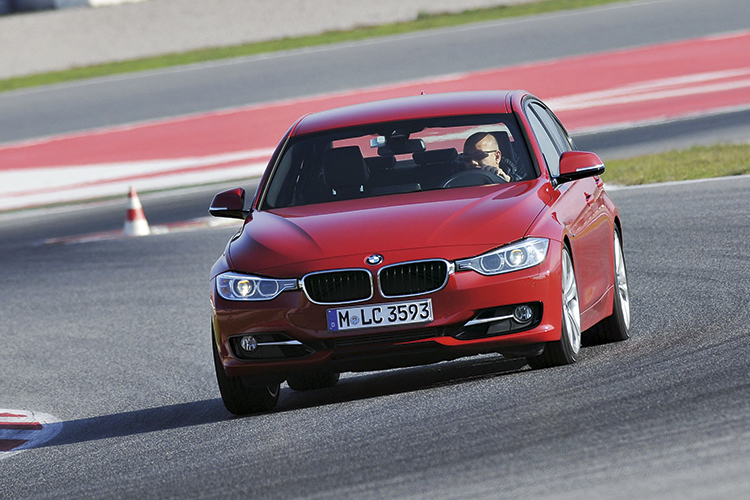 The test cars at the launch were fitted with Adaptive M Sport suspension to cope with the rigours of “racing”.

BMW’s most important “motor” is the BMW 3 Series, which is sold in over 130 countries and accounts for about a third of the automaker’s total sales.

The latest BMW 3 Series, codenamed F30, is a sixth-generation model that faces formidable foes such as the Audi A4 and Mercedes-Benz C-Class, both recently updated to challenge the Bimmer.

Undoubtedly a product that has undergone intensive development, the new 3 looks somewhat like a 5 Series made smaller and given sharper proportions. Its sleek aerodynamics incorporates BMW’s new Air Curtain underbody technology, which smoothens the airflow around the front wheels. 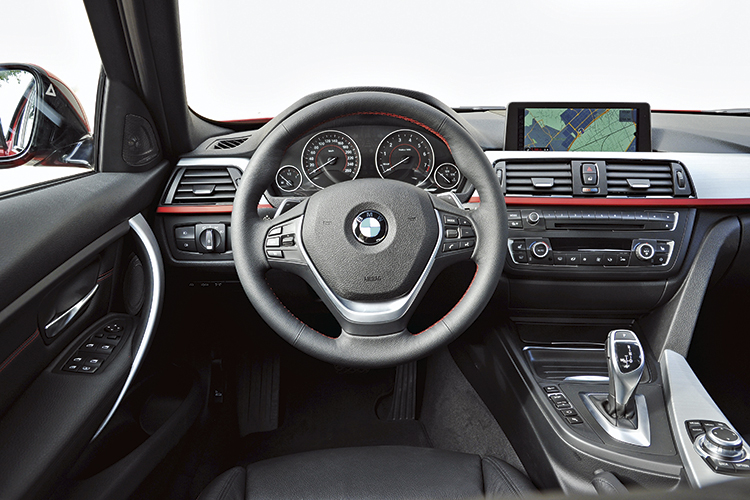 As expected, the new body is larger than before, with its length and wheelbase stretched by 93mm and 50mm respectively. Its tracks, too, have been stretched, with the front gaining 37mm and the rear, 47mm.

Despite these increases in dimensions, its kerb weight is 40kg less than that of its predecessor. Occupants on the back seat, of course, will be more concerned about the modest extra space they get – 15mm more legroom and 8mm more headroom, to be exact. 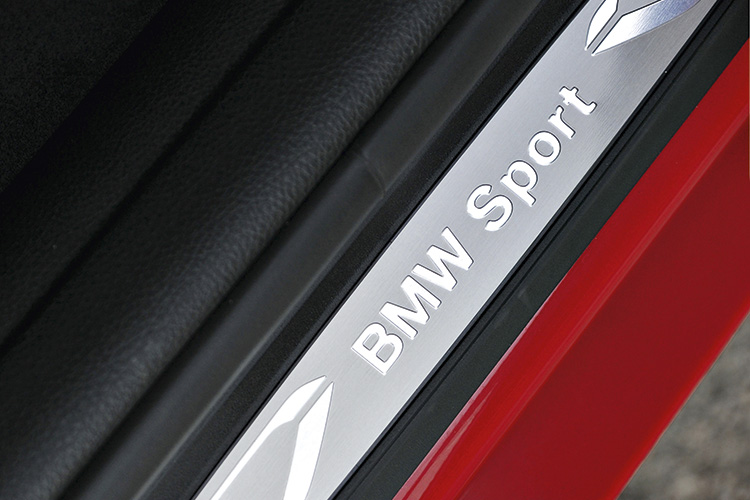 Another promising figure is the 10 per cent improvement in body rigidity. This allows the damping control to be boosted and the damper mountings to be stiffened, without destroying the ride quality. The axle load ratio remains an ideal 50:50.

A key technical change is the electro-mechanical steering system, which is offered with a variable-ratio option. Even without the clever gearing (built into the rack rather than driven off a motorised planetary gear set), the speed-sensitive steering is already better than the previous hydraulic affair in some ways. 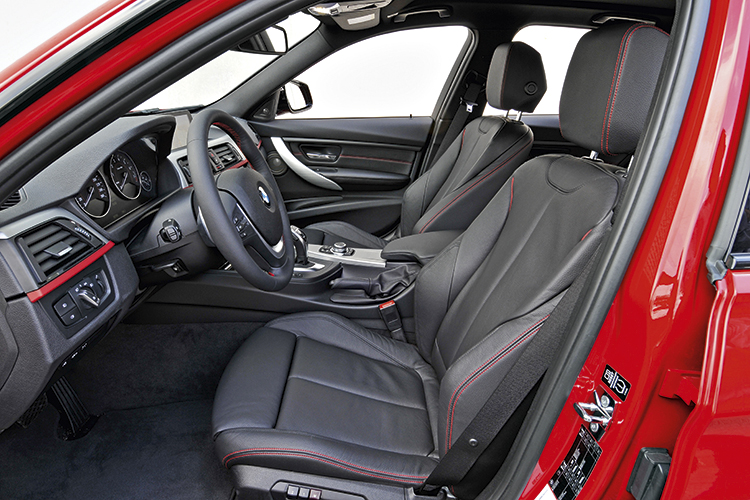 The directness and lightness of the new electric helm make the old one feel a little ponderous, and it works nimbly in concert with the precise chassis. However, the “classic” steering system is a bit clearer in its communication with the driver.

The tyres being steered are 17-inch Pirelli P7s, with run-flat Bridgestone Potenza S001s also available from the factory in 18- or 19-inch sizes. The standard “shoes” are a little down on grip compared to the sportier Potenzas, but they behave well at the limits of adhesion and boast greater cruising comfort. Even the run-flat rubber feels surprisingly comfortable rolling over the tarmac in the European mountain passes. There was track time, too – BMW booked the Catalunya F1 circuit as part of the test drive programme, which is unusual for a non-M model launch. But the test cars all had Adaptive M Sport suspension, a worthy option that drops the ride height by 10mm, firms up the springs and stiffens the anti-roll bars. Electronically controlled damping is part of the package.

A cockpit switch, called Driving Experience Control, lets the driver vary the damping between “comfy” and “sporty” settings. Even the most hardcore Sport Plus mode, which is what the 328 needs to tackle the racetrack effectively, feels well sorted. The same goes for the simpler M Sport suspension and the regular “clean” suspension. According to engineers I spoke to, these fixed-rate underpinnings have been respectively tuned to provide the adaptive system’s “sporty” and “comfy” sensations. Eco Pro mode turns the BMW 3 Series into a tree hugger of sorts, but also makes it feel frustratingly wooden on the road.

A comfortable sense of sportiness also characterises the 328 engine, a 2-litre turbocharged to 245bhp and 350Nm. It is a longitudinal 4-cylinder with the refinement of an inline-6, thanks to balancer shafts and a centrifugal pendulum absorber integrated with the dual-mass flywheel.

In the engine “vroom” proper are high-precision direct fuel injection, a twin-scroll turbo, Double-Vanos variable camshaft timing and Valvetronic variable valve timing. This powerplant is also employed in the 528i, with a detuned 184bhp version for the new F30 320i. 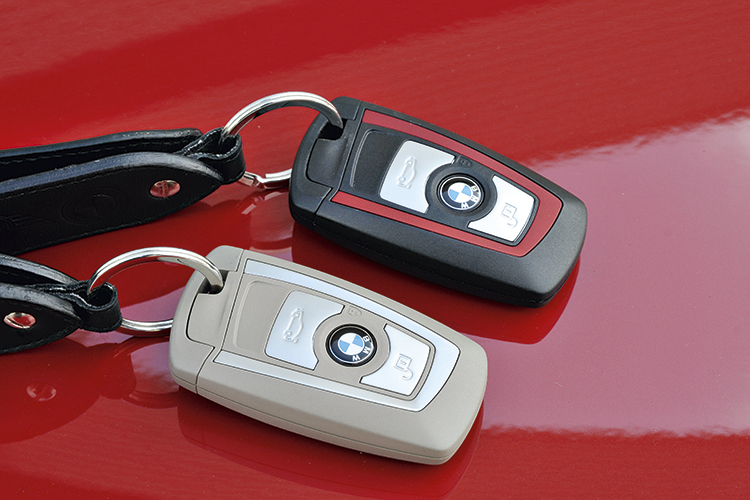 The ignition key is black-and-red for Sport Line, oyster-and-silver for Modern Line and black-and-chrome for Luxury Line.

On the go in the 328i, there is a touch of turbo lag, but it is no worse than waiting for a good atmospheric engine to come on-cam. Once the boost “blows” in earnest, this 2-litre becomes the equivalent of a lively 3.2-litre, with powerful torque vigorously pushing the saloon (it’s rear-wheel drive).

Transmitting said energy is a ZF 8-speed automatic, which demonstrates that a great auto gearbox need not be a dual-clutch transmission (DCT). The ZF device is lighter and more compact than an equivalent DCT, so it “robs” less cabin console room. 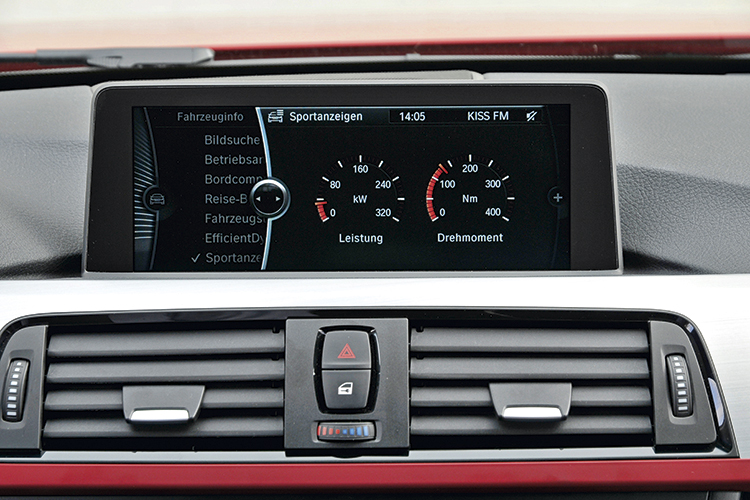 Even though the gearshifts up and down the autobox are not as swift as a German DCT’s, they are fast enough for the 328i and possibly the fastest in the 2-litre torque converter category. Moreover, there is lock-up in all eight forward ratios, which would equal the mechanical efficiency of a “semi-manual” DCT.

Those eight ratios also offer a wide spread of “speeds” for high acceleration accompanied by low consumption, plus the ability to drop several gears at a time rather than in a sequential, less immediate fashion.

On the Circuit de Catalunya, with the car’s Sport+ driving mode selected and the paddle-shifters “at play”, I could have a bit of fun without fear, knowing that Sport+ disables the traction control while keeping the stability control on standby in case of “emergency”. 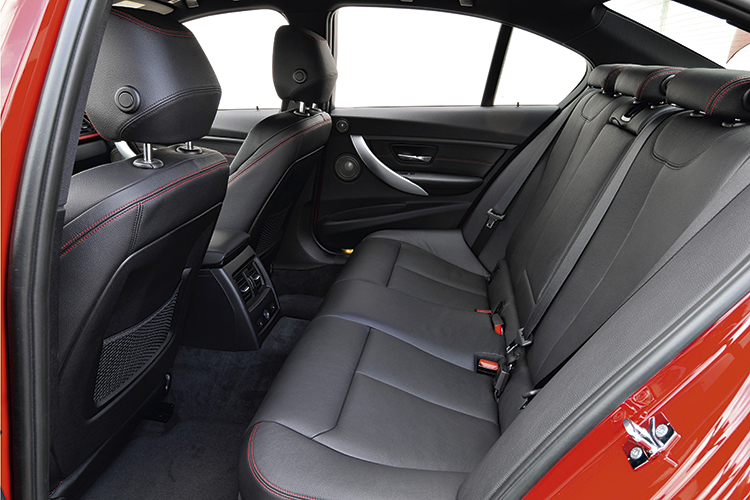 The vehicle is perfectly balanced when negotiating a corner, any kind of corner – there is minimal understeer, which transitions progressively into neutrality, and moves on to predictable oversteer when hammered aggressively enough.

While the 328i acquitted itself extremely well with its “handling” of the racetrack, its acceleration was merely adequate in such an environment. The new 3-litre 306bhp 335i would have been a better choice for the circuit, but it wasn’t made available. 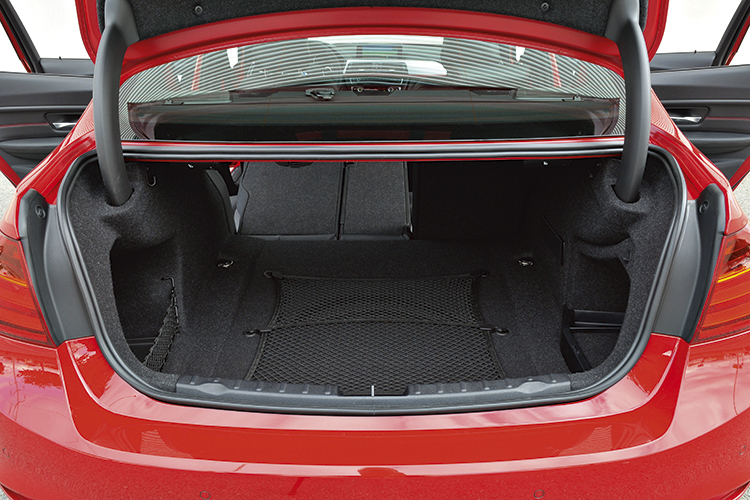 Well-organised 480-litre boot is a useful 20 litres bigger than before; optional Comfort Access lets you pop open the lid by putting your foot underneath the rear bumper.

Besides its stronger pick-up (which is far more fuel-efficient, too), the new 328 is also superior to the 330 in all other aspects that matter to the executive end-user, such as appearance, comfort, convenience and on-board equipment. The newcomer’s gadgets include a full-colour head-up display, Lane Change Warning, Speed Limit Info, Surround View camera-assisted parking and Active Cruise Control with Stop & Go. 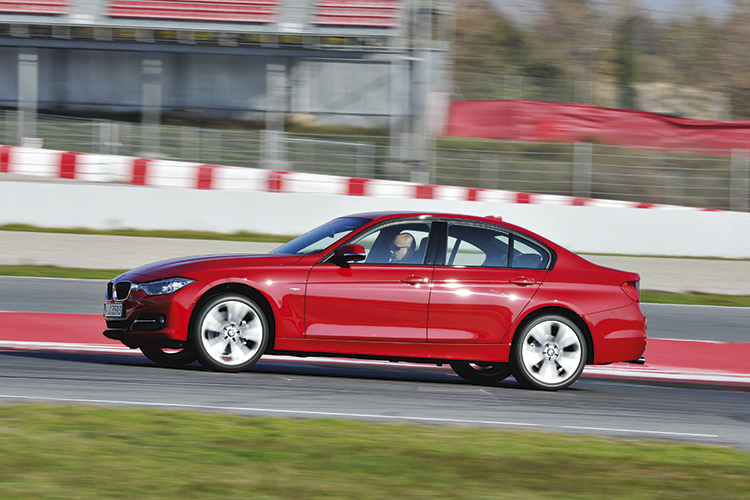 The BMW 3 Series will surely give the Audi A4 and Mercedes-Benz C-Class a hard time.

The new 3 Series is even equipped with an environmental conscience. BMW’s Eco Pro drive programme is standard-fit (and steadily applied across the model range), along with Auto Start-Stop, which switches off the engine during brief halts at traffic junctions or in stationary traffic, conserving fuel.

The exact opposite of Sport+, Eco Pro reduces the throttle response to a near-lifeless level and transforms the transmission into an economy rally co-driver. Upshifts are early and hasty, downshifts are delayed for as long as possible, and the “overdrive” 8th gear is a top objective, even if it cuts the engine revs to just over 1000rpm. Eco Pro also commands the climate control to work less hard, thereby saving some more petrol. 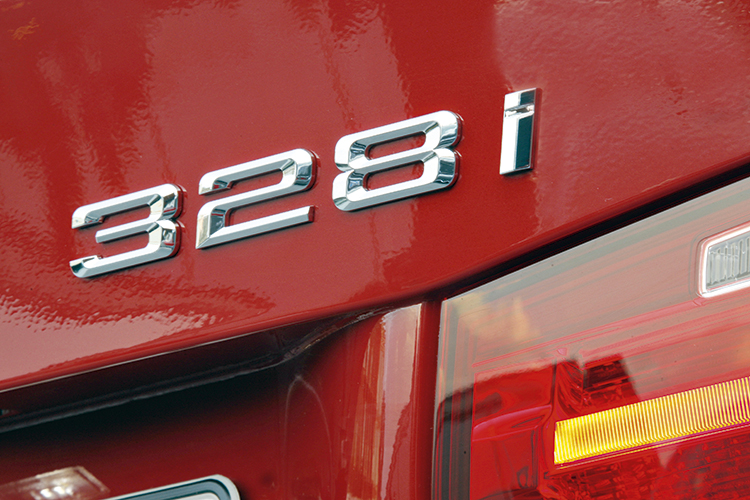 And the reward for all that “Eco Pro-fessionalism”? A reduction in average fuel consumption of up to 20 percent, with a corresponding increase in touring range from the 60-litre tank. But even without Eco Pro activated, the 328i offers generally excellent economy considering the performance and amenities.

With the all-new 3 Series, BMW has defined yet another Bavarian benchmark. It handles beautifully, with a wonderful interconnection between car, driver and bitumen. It also rides nicely, looks good and is made to high quality standards. Indeed, the Three kingdom cometh. 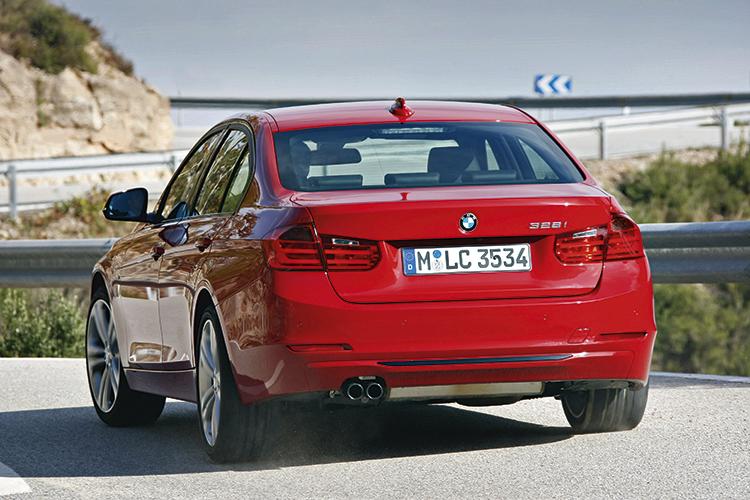 Diligent engineering and clear-headed Teutonic thinking have resulted in a fine sports saloon every PMEB would desire to own.

Check out the BMW 3 Series