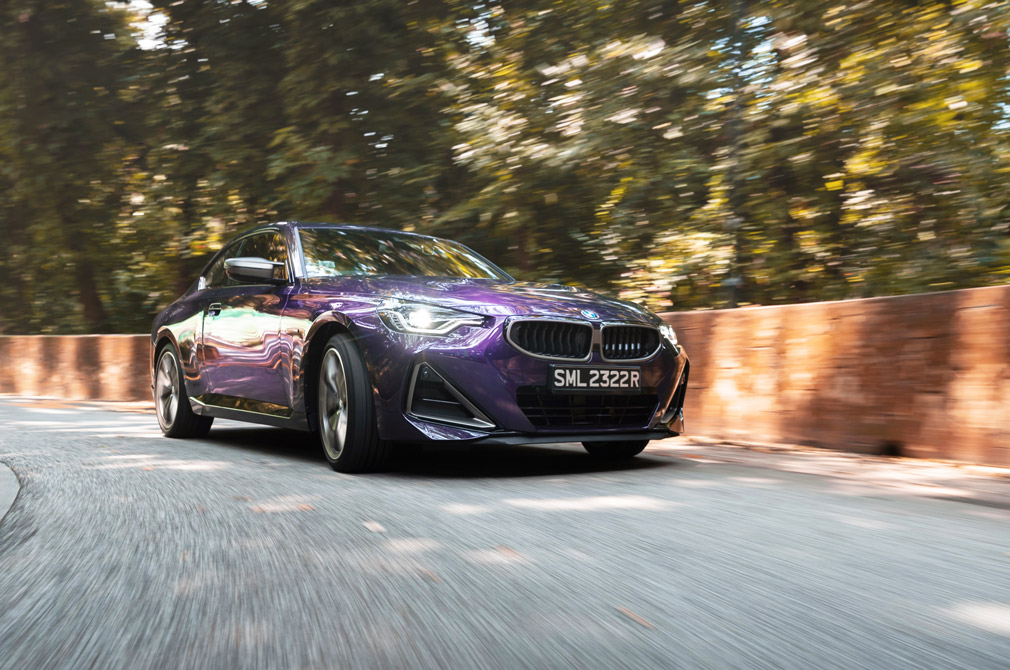 The M240i xDrive Coupe may be brand-new but it is as old-school BMW as you’re likely to get these days.

It ticks so many traditional BMW boxes – compact 2-door, three-box coupe, straight-6 engine, Hofmeister kink on the C-pillar. Even its kidney grilles are normal-sized.

The purists would have been even happier if it were rear-wheel-driven (like its lesser 220i Coupe sibling), but with the need to corral 374hp (34bhp more than before) and a storming 500Nm of torque from the 3-litre turbo engine, all-wheel-drive it is.

A few aesthetic details take some getting used to, especially the squinty headlamps and droopy taillamps, but the long nose and cab-back proportions, short overhangs, powerdomed-bonnet, flared arches and squat stance send all the right visual messages. As does the test car’s lovely deep-purple hue (Thundernight Metallic, in BMW-speak). 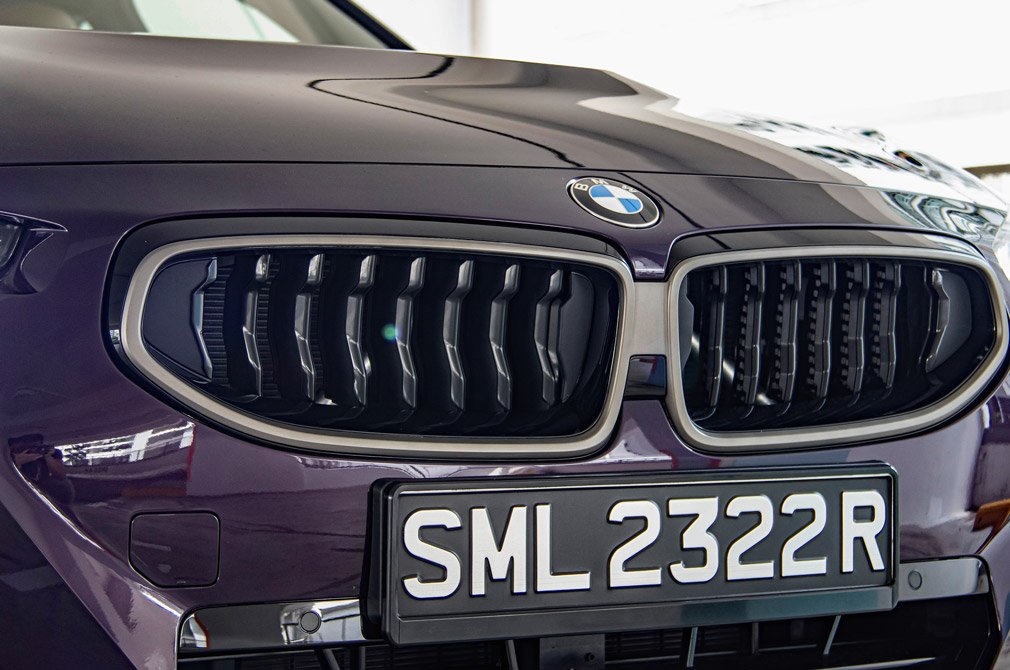 Some subtle touches distinguish the M240i from the 220i. Grey kidney-grille frame, Shadow Line (ie black) trim on the window surrounds, handsome 19-inch M light-alloy wheels (with tyre sizes staggered front and rear), a body-coloured bootlid lip, a more aggressively-styled rear diffuser and valance, and large twin tailpipes see to it that those who know, know.

The taut, shrink-wrapped styling cleverly disguises the fact that the M240i is almost a full size bigger than its pert predecessor – it’s 105mm longer and 64mm wider than before, although its roofline is 28mm lower.

Consequently, and despite the use of “intelligent lightweight design for body and chassis” (BMW’s words), it weighs 1690kg – over a 100kg more than its equivalent predecessor. 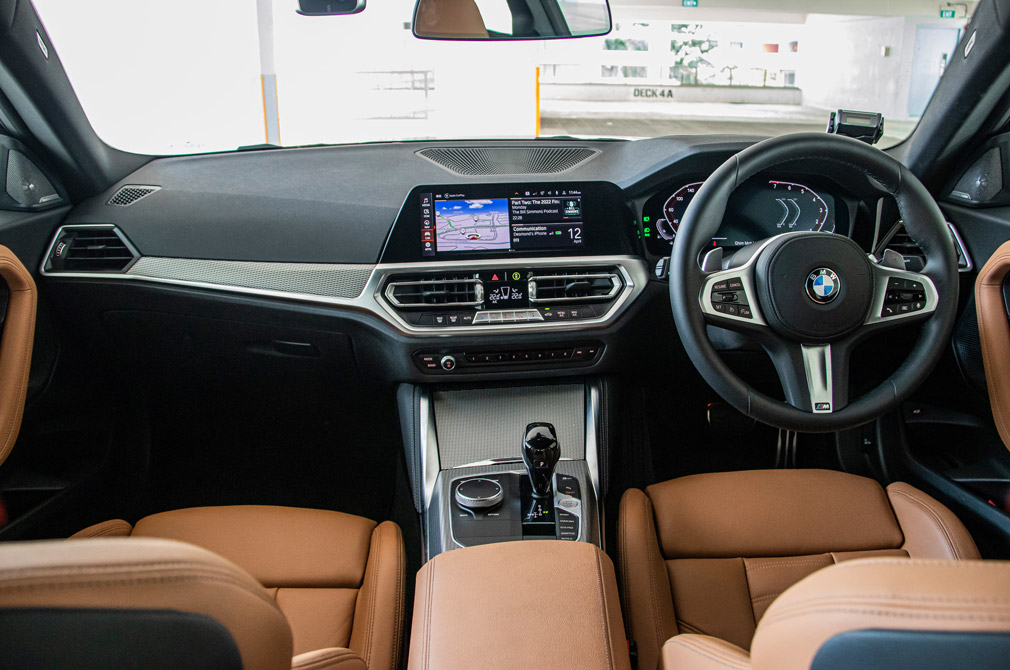 IN THE PILOT’S SEAT

That bigger body at least benefits cabin space, which is noticeably more generous than before, especially in the rear – full-sized adults can now fit in there quite comfortably.

Build quality is predictably excellent. Ensconced in the supple Vernasca leather of the contoured M-Sport seats, your eyes settle on the tastefully-judged metallic finishes on parts of the fascia and centre console, while your palms and fingertips are seduced by the soft-touch surfaces on the doors and dashtop.

But while the inside of the M240i is a luxe cocoon, it is also a focused workplace for the keen driver. The centre-stack of the fascia is angled towards the driver in time-honoured BMW tradition, the user interface is intuitive with (thank goodness) physical buttons for the most commonly-used functions, and the driving position is low but all-round visibility is good. 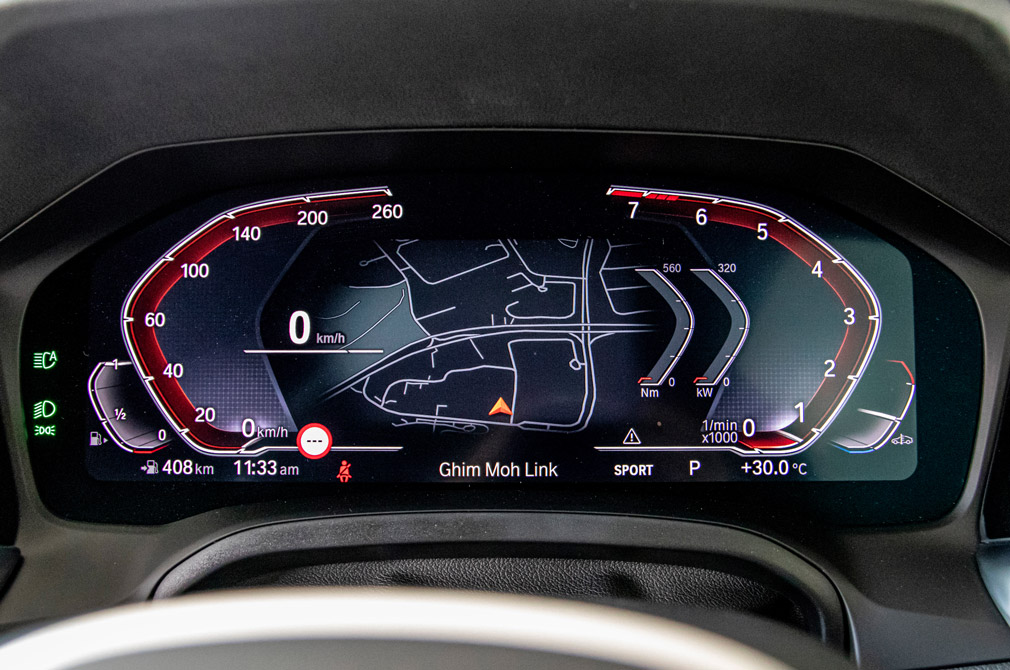 Although simple round dials would have been preferred over the mirror-image C-shaped main dials that are now standard fare in the Munich marque’s cars, the instrumentation is clear enough to be easily-read.

Equipment levels are high, with the full suite of intelligent safety and driver-assistance features and smartphone integration with both Apple CarPlay and Android Auto capability.

On the outside, the car faces the world with adaptive LED headlights (with automatic non-dazzling high-beam function) and active air flaps in that kidney grille as well as the lower bumper intake, which open only when cooling air is needed.

The chassis exceeds even the lofty expectations that the driving position engenders. It rides bumps very sweetly, remains unfussed over fast undulations and cruises quietly and effortlessly thanks to the oodles of low-end torque (max torque of 500Nm is on tap from just 1900rpm).

And when the tarmac starts to meander, the car is very keen to change direction, even with the adaptive dampers at their softest. Thank the M240i’s near-perfect 50/50 weight distribution and low centre of gravity for that. 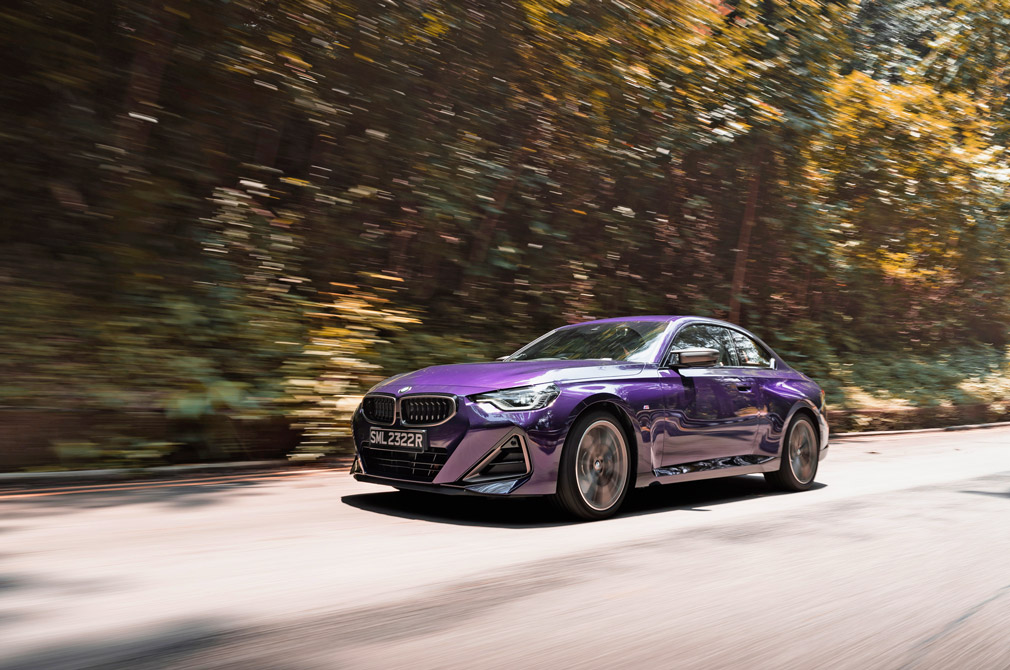 The nose responds eagerly to the quick, linear steering, and well-judged steering weight and generous feedback through the rim keep you clued-in on the road surface below and the state of the tyres’ grip.

Dial things up to Sport Plus mode and things get commensurately more grin-worthy. The car’s considerable heft appears to be of no consequence because it darts and dances through bends like a true lightweight.

BMW has deliberately given the AWD drivetrain a distinct rear-wheel-drive bias. Coupled with the standard M-Sport rear differential and Dynamic Stability Control which intelligently channels excess power to the outside rear wheel to more effectively pivot the tail, the effect is discernible as the car squats subtly at the rear and fires out of turns with delicious poise.

The car is equally entertaining down the straights – the 8-speed autobox responds with instantaneous urgency to paddleshift commands, and the 3-litre straight-6 is pure music as it howls to its 6500rpm redline. A century sprint time of 4.3 seconds is thrillingly quick of course, but the manner in which it gets you there is just as exhilarating. 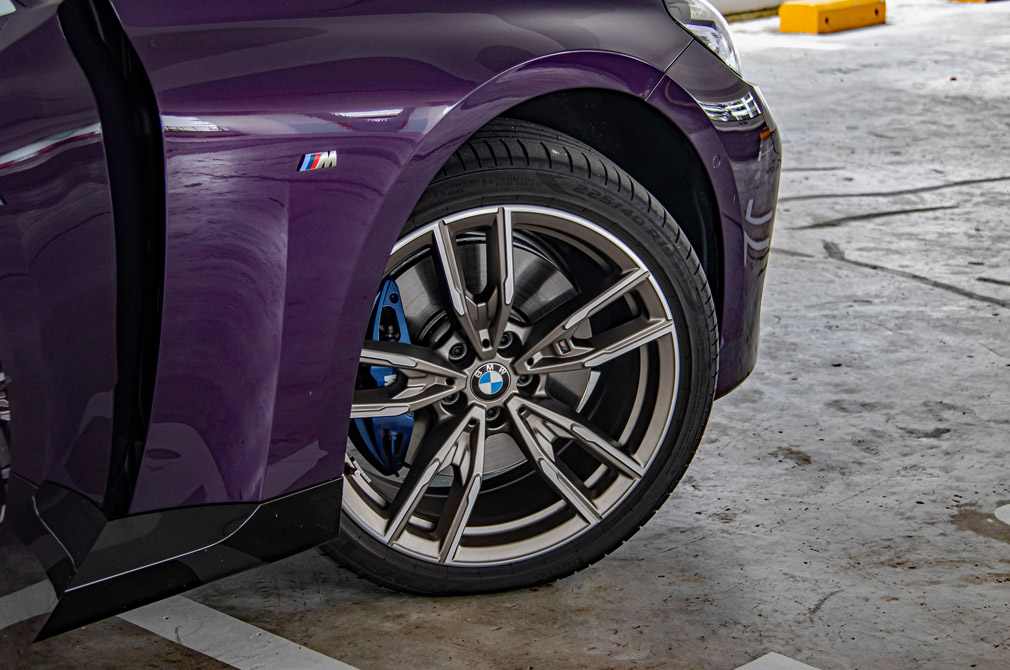 Equally importantly, pedal feel is reassuringly firm and progressive, allowing the driver to very precisely meter out the braking force when hurtling towards a turn, or even for subtly-judged left-foot braking to trim the line mid-bend, if that’s your style.

With most of the motor industry now intent on automating the “mobility experience” and removing the driver from the equation as much as possible in the name of safety and convenience, it is a privilege to sample a car designed to entertain, one that still prioritises driver involvement above all else.

The M240i is that increasingly rare thing – a new car with old-school performance-car priorities. Enjoy it while you can. I certainly did. 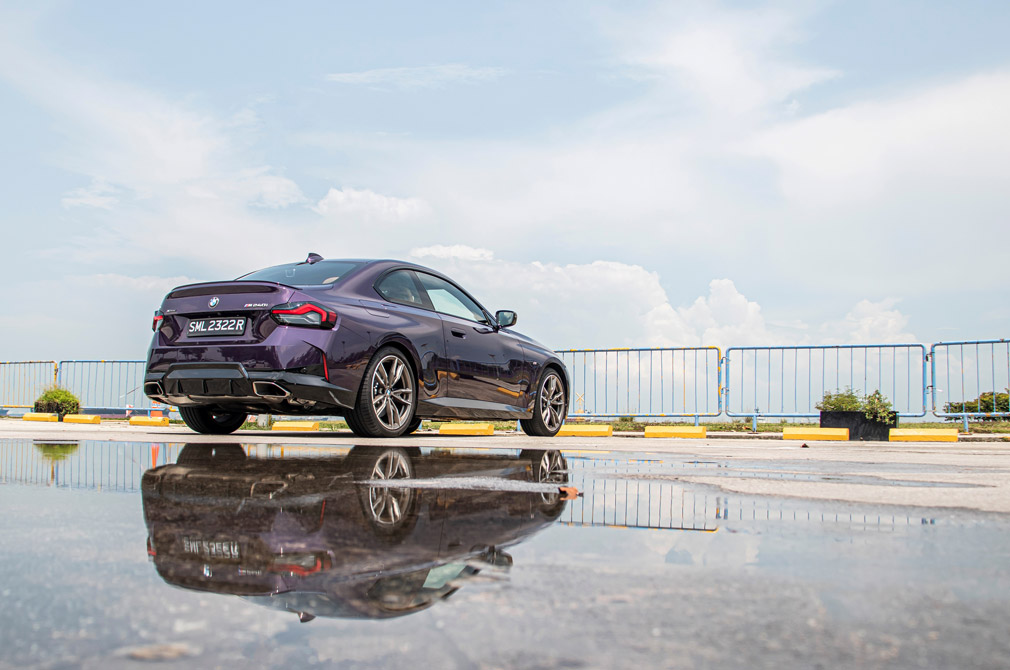