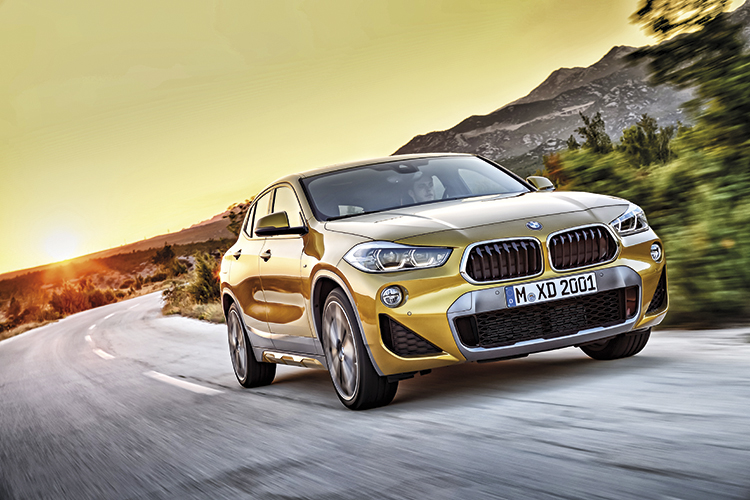 BMW already has five SUVs in its X family, but it is not quite done yet in vying for attention in the urban crossover segment. Currently in the works is the jumbo-sized X7, flagship model of the X lineup above the X5.

Slotting between the popular entry-level X1 and the third-generation X3 is an all-new X2. Underpinning the newest X is BMW’s UKL2 platform shared with its upsized MINI cousins (Countryman and Clubman), its 2 Series Active/Gran Tourer siblings and the X1.

Unlike any other BMW SUV right now, the X2 has its own stand-alone design that is a cross between coupe and hatchback. Think Mercedes-Benz GLA, but sharper-looking.

The X2 has a sweeping roofline capped by a prominent roof spoiler at the rear windscreen, with minimal overhangs front and rear. The chiselled X2 looks positively athletic, an impression reinforced by the big-bore twin exhaust pipes, which have the same 90mm diameter as the tailpipes of the X6. 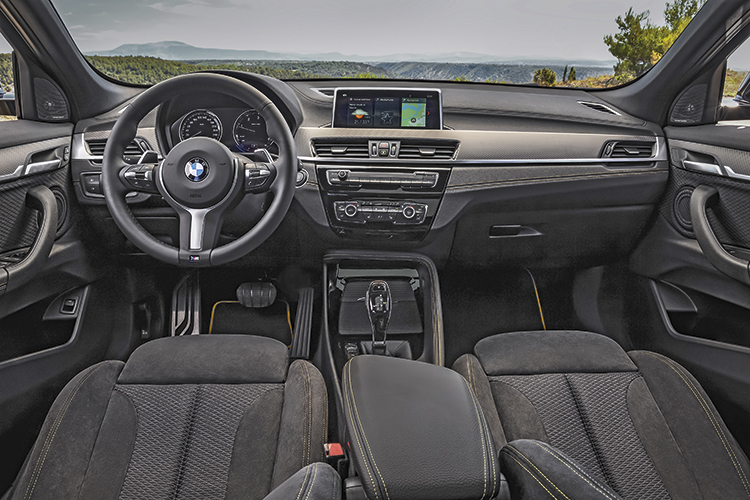 BMW X2’s cabin is laid out like the BMW X1, but looks sportier, with decent headroom despite the low roofline.

The visually squat X2 looks more so with the 10mm-lower M Sport suspension, which comes with the M Sport X package. Even with the reduced ride height, the subsequent ground clearance of 172mm is enough to handle urban humps or “ponding” encounters.

Styling elements specific to the X2 include a kidney grille that is flared at its base (a first for the Bimmer identifier) and BMW roundels on the C-pillars, which are reminiscent of classic BMW coupes such as the 2000 CS and 3.0 CSL.

A hexagonal theme dominates the frontal view of the vehicle – from the bumper air-scoop surround, to the air intakes’ mesh detailing, to the hexagonal LED daytime running lights.

The X2 introduces two new colours to the BMW palette – Galvanic Gold and Misano Blue, both of which are available with the M Sport and M Sport X packages. These optional paint jobs further emphasise the newcomer’s extroverted personality.

All 20 units of the X2 fleet for the media test-drive in Lisbon are identical xDrive20d M Sport X models in Galvanic Gold. Alas, this all-wheel-drive diesel version won’t come to Singapore, because of the more stringent VES (Vehicular Emissions Scheme). 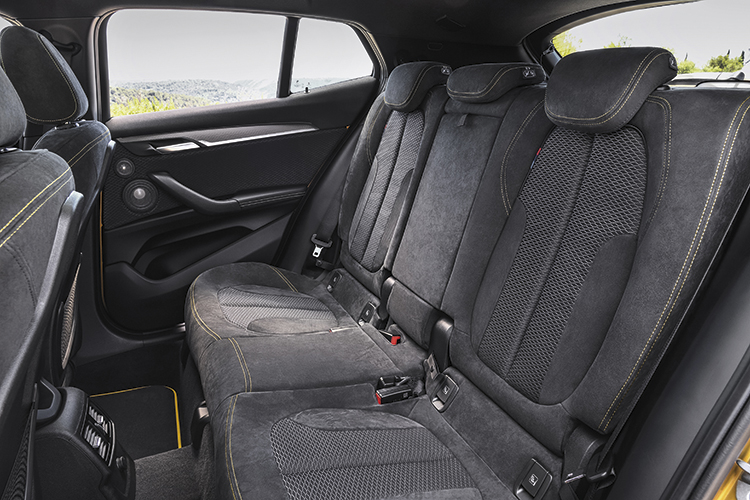 What’s coming instead is the X2 sDrive20i M Sport X, with a 2-litre turbo petrol engine and front-wheel-drive. It will be followed by a sDrive18i version with a 1.5-litre 3-cylinder engine.

In any case, it’s time for me to poke around inside the X2 to get better acquainted with it.

The interior design is less adventurous than the exterior design and closely follows the cabin layout of the X1, although the X2’s trim and upholstery choices add brightness and sportiness to the otherwise ordinary ambience.

For instance, the M Sport and M Sport X cabins are upholstered in hexagon-patterned fabric/Alcantara, with four shades of part-perforated Dakota leather as the extra-cost alternative. Yellow stitching to match the dramatic Galvanic Gold paintwork is also available.

Even though the X2 is the smallest car in the X range, it shares its 2670mm wheelbase with the X1 and is therefore roomy enough for five people. 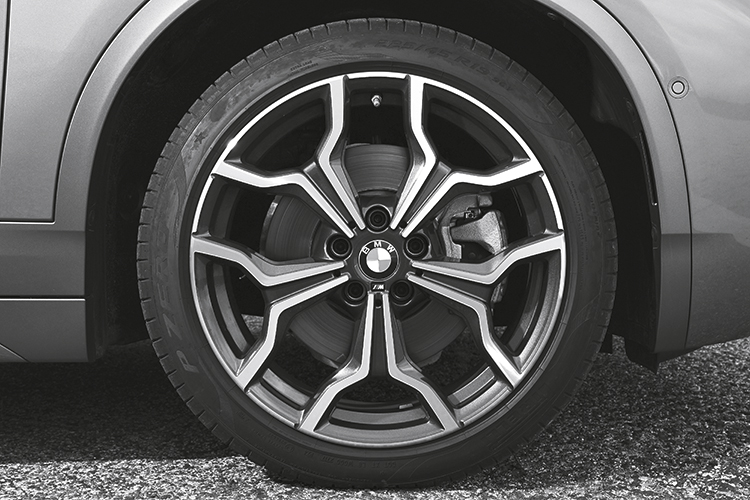 Unlike the X1, the X2’s backseat doesn’t slide, but it does get a two-step recline function and provides almost the same amount of legroom.

Even with the X2’s high shoulder-line and low-slung roofline, the occupants won’t have that hemmed-in sense of claustrophobia. There’s a panoramic roof option to enhance the airiness within the cabin.

The biggest surprise for me is headroom. Lanky adults can still fit in the rear without resorting to a crouching-tiger posture.

Taking care of smaller items within the cabin are the evenly shaped glove compartment, large door pockets and centre-console bin and tray. 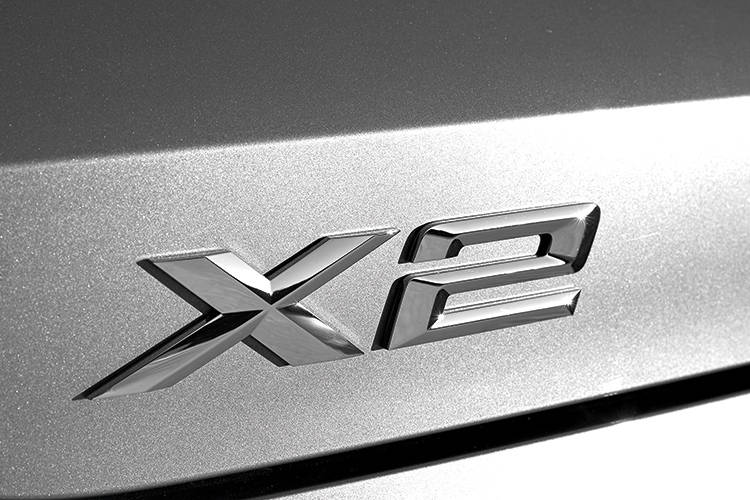 I’m just glad that BMW left out gesture control, the gimmick available for more expensive BMW models. Strangely, the X2 isn’t equipped with onboard Wi-Fi pairing and wireless charging for smartphones. These omissions are most unhip for a hip number like this one.

The instrumentation is uncluttered, with so-called “black panel” technology, even though the main dials are still analogue affairs. A full-coloured head-up display can be specified as a factory-fitted option.

It’s easy to get comfortable in the driver’s seat, which includes adjustable under-thigh support. The slightly raised seating position allows for good outward visibility, with all controls falling naturally to hand.

In the hands is a chunky M Performance steering wheel with multi-function controls and paddle shifters. Standard on the X2 M Sport X, the wheel is one of the best in the business, thanks to its pleasing aesthetics and excellently tactile feel. 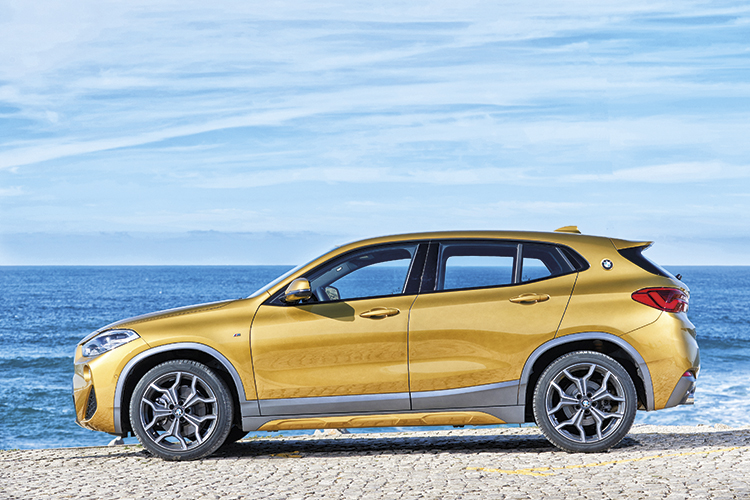 The BMW X2 slots between the entry-level BMW X1 and the third-generation BMW X3.

According to Andreas Stumm, X2 Driving Dynamics Project Manager, the car has been tuned for improved agility and responsiveness over the X1.

The chassis is made 10 percent more rigid, the steering rack is re-calibrated for a more direct feel, the suspension camber angles are revised and the bushings are beefier.

Shod on upsized 19-inch Pirelli P Zeros with lowered M Sport suspension, the ride is taut but still very well-damped. It’s quite unlike the bouncy, comfort-biased ride quality of the X1. Tyre noise, which is evident in the X1, is muted in the X2.

The X2’s steering response is linear, providing confidence-inspiring feedback when the roads get twisty. This, again, is different from the X1, which has a lighter helm, accompanied by rather roly-poly turn-in. 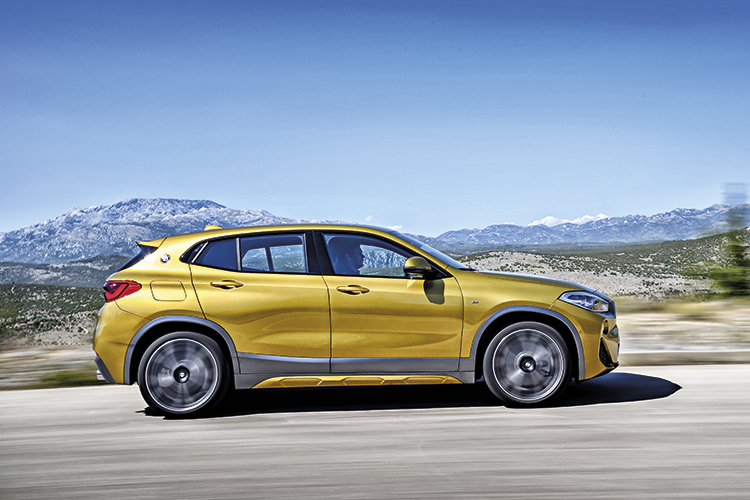 BMW X2 is agile and responsive, with good traction and equally good body control in corners.

Although the xDrive20d has all-wheel-drive, the power is sent 100 percent to the front wheels by default, for better efficiency. Only when a loss of traction is detected would power be partially redistributed to the rear wheels, so as to regain traction.

A zero-to-100km/h sprint of 7.7 seconds is brisk rather than fast. But it is the 2-litre turbo-diesel’s stout 400Nm of torque that makes for gratifying acceleration from very low revs, even when going up steep hill inclines.

Depending on your driving mood or driving style, you may toggle between Eco Pro, Comfort or Sport mode to fine-tune your drive.

What remains irksome is an incessant diesel thrum under acceleration. Thankfully, Singapore will get the much sweeter-revving sDrive20i petrol-turbo 2-litre engine, as featured in the X1.

In the X2, this front-drive motor will be mated to a new and quicker-shifting 7-speed dual-clutch transmission (instead of the X1’s existing 8-speed automatic). The new gearbox compensates for the petrol engine’s more modest 280Nm of twisting force (120Nm less than the xDrive20d) and enables a zippy 0-100km/h sprint of 7.7 seconds. 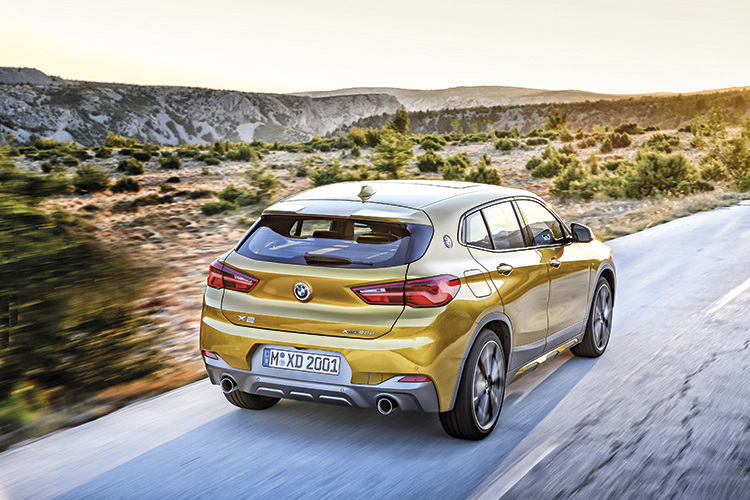 The BMW X2 may be targeted at affluent millenials, but I won’t be surprised if it also appeals to their parents, the empty nesters.

Will there be an M version with steroids to exploit the sporty chassis of the X2?

Dr Julius Schluppkotten, the head of the X2 project, did not confirm anything. But I bet his wry smile, when asked about it, was an indication that BMW is prepping an X2 answer to the Mercedes-AMG GLA45.

Obviously, the BMW X2 is not alone in the premium compact-crossover segment.

The Mercedes-Benz GLA, for instance, had a makeover last year and still has the rugged good looks to soldier on. But it cannot hold a candle to the X2 in terms of ride composure and driving agility. Then there is the Audi Q2, our ST-Torque Best Compact SUV for 2017. It is undeniably trendy and zesty, but it’s one of the smallest cars in the segment and it feels more mass-market VW than upmarket Audi.

In my opinion, the closest rival to the X2 is the Volvo XC40. The Swede is roomy for its body size, comfortable and quick in a straight line. It also comes with lots of kit, including a full suite of safety gadgets. But the XC40 misses the mark in outright driving enjoyment.

The X2 isn’t perfect, either. Too many of its active-safety features are optional, such as Lane Departure Warning, Collision Warning, Automatic Emergency Braking and Speed Limit Info.

If you can look past the X2’s short checklist of bells and whistles, it scores well with its funky good looks, efficient packaging and true-to-form driving dynamics.

The X2 may be targeted at affluent millennials, but I won’t be surprised if it also appeals to their parents, the empty nesters.

Check out the BMW X2