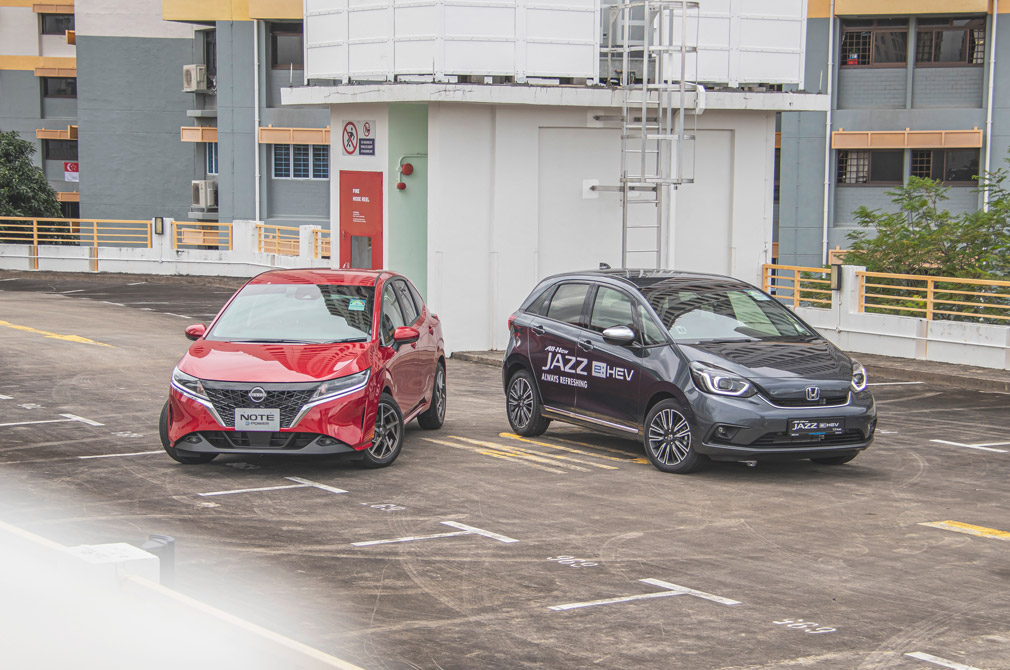 The Honda Jazz has long been the favourite of supermini buyers here in Singapore. Drivers love this model’s strong points, which include a roomy and versatile cabin, easy handling and frugal drivetrain.

Now in its fourth generation, Honda says that the Jazz offers improved refinement and even more practicality. More significantly, the model is finally officially available with a petrol-electric hybrid drivetrain.

Facing off against the Honda Jazz is the Nissan Note e-POWER. Now in its third generation, the Note features a handsomer design and an enhanced cabin with better equipment.

Like the Jazz, the Note also has a petrol-electric hybrid drivetrain. But as we shall soon see, each one has a unique setup and execution.

Now that these two “musicians” have arrived, let’s listen and find out which one plays more enticing songs to buyers. 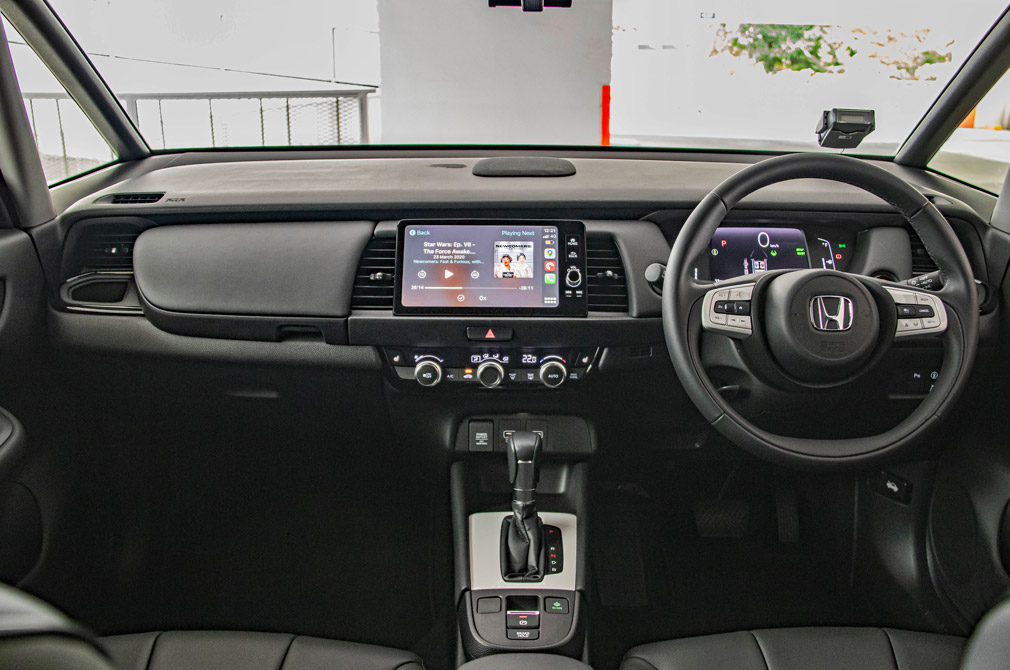 The Honda Jazz is roomier and feels airier than the Nissan Note. And more importantly, its forward and lateral visibility are better, too.

The latter points are courtesy of the thinner A-pillars (Honda says they are 50 percent slimmer) and larger quarter glass panels. Being able to see more when you’re turning vastly improves safety.

The rest of the Jazz’s cockpit is laid out neatly and ergonomically. Plus points include the steering-mounted controls and connectivity options – the USB ports and 12-volt socket are placed close to each other, unlike in the Note.

The Jazz’s infotainment display is also factory-fitted and looks neater than the Note’s, although the screen in the latter is larger.

Now, although the Jazz has the edge in roominess, the Note has the advantage when it comes to aesthetics. 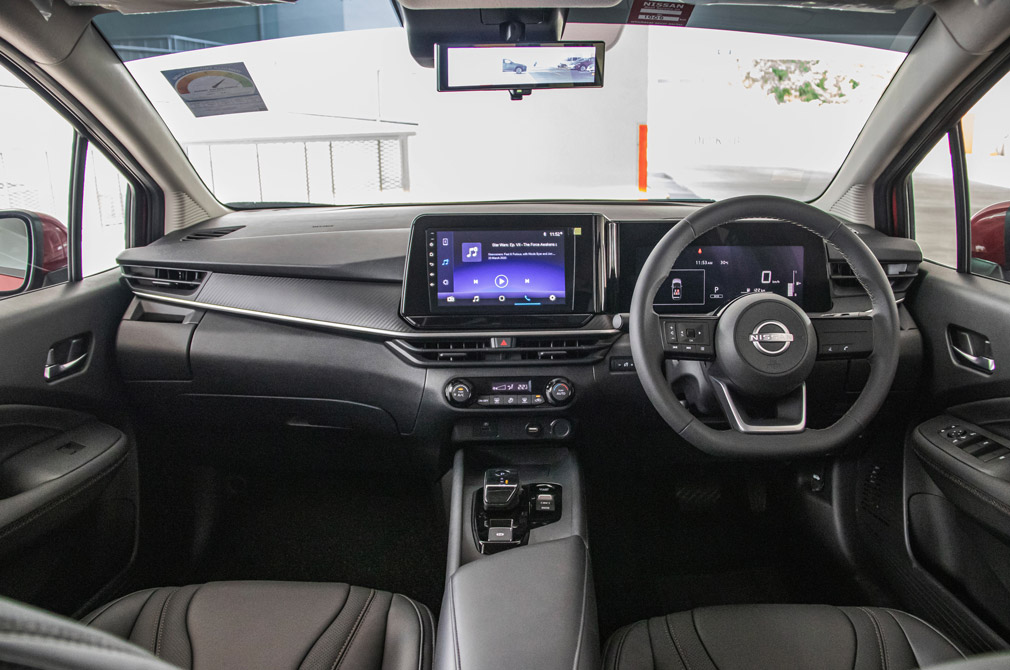 I find the Note’s instrument panel more attractive, and the lattice pattern in the display’s background is a particularly nice touch. It reflects the grille design, and this shows that more thought was put into these details.

The Note also has a cool two-layer console, with extra storage space on the lower level. That gives it some extra utility over the Jazz.

And shifting gears in the Note using the “mouse” feels more futuristic than the Jazz’s conventional gear lever.

Also more modern is the Note’s Intelligent Rearview mirror, which lets drivers choose between a conventional mirror and a digital one. The latter, which displays footage from a rearward-facing camera, means your view is not obstructed by tall occupants in the backseat. 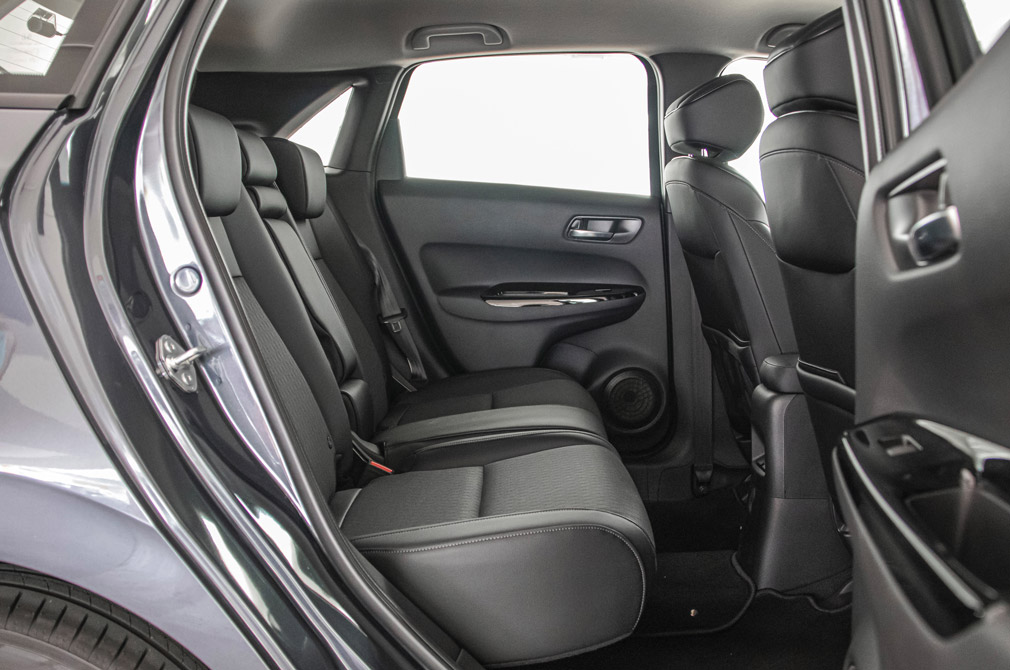 Speaking of backseats, it comes as no surprise that the Honda Jazz’s rear bench is superior to the Note’s. Not just in terms of space, but flexibility, too.

The Jazz’s backseat is still the segment benchmark for it even puts some compact sedans to shame. You can move the driver’s seat all the way back and there will still be enough legroom for a 1.75m tall passenger.

Those ULTRA seats let you flip up the squabs (where bums rest) to create room for transporting taller items, such as plants. Neat freaks will like the fact that this lets them vacuum under the seats, too.

These points make the Honda Jazz quite impressive, considering that the Nissan Note is in fact the (slightly) larger car. 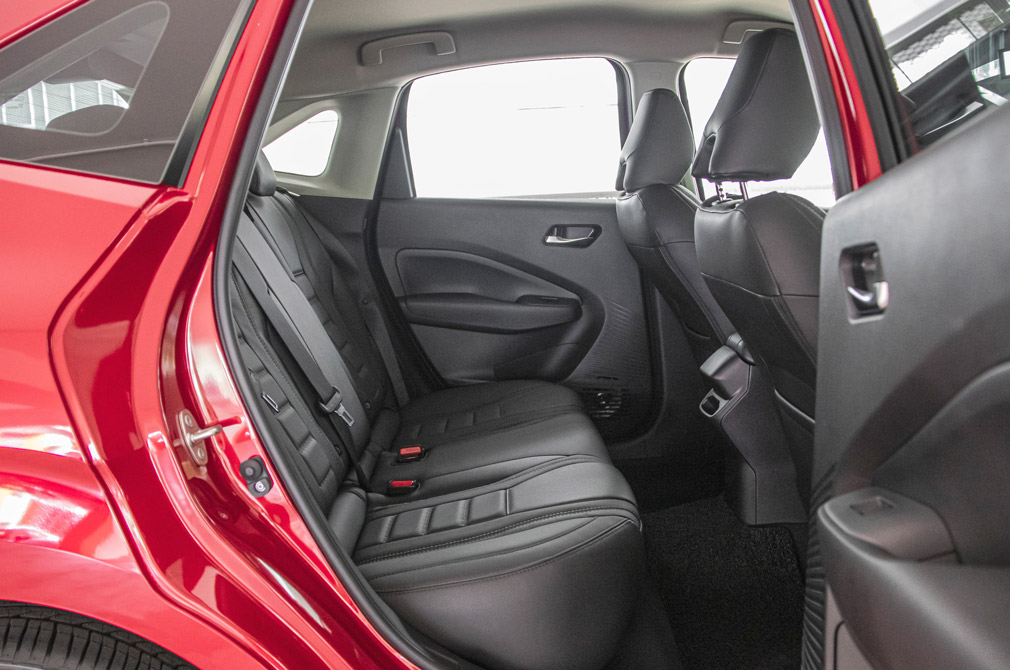 So, although it doesn’t have ULTRA seats, the Note’s rear bench remains relatively roomy, with plenty of headroom and legroom, despite its taller floor protrusion.

On a positive note, the Note’s 340-litre boot (rear seatbacks up) trumps the Jazz’s 284-litre capacity. However, the Jazz’s boot does have a wider aperture and less wheel arch intrusion, making it more conducive to bulky items.

The Honda Jazz e:HEV uses a unique, dual electric motor setup, with one motor charging the battery and the other one driving the car.

The petrol engine powers both electric motors. This means that it acts as a charger and as an additional power source for propulsion. And when the situation calls for it, the engine can also directly drive the front wheels.

The Jazz has a combined system output of 124hp and 253Nm of torque. Kah Motor does not provide actual performance figures, but an estimated zero to 100km/h time of 10 or 10.5 seconds is realistic. 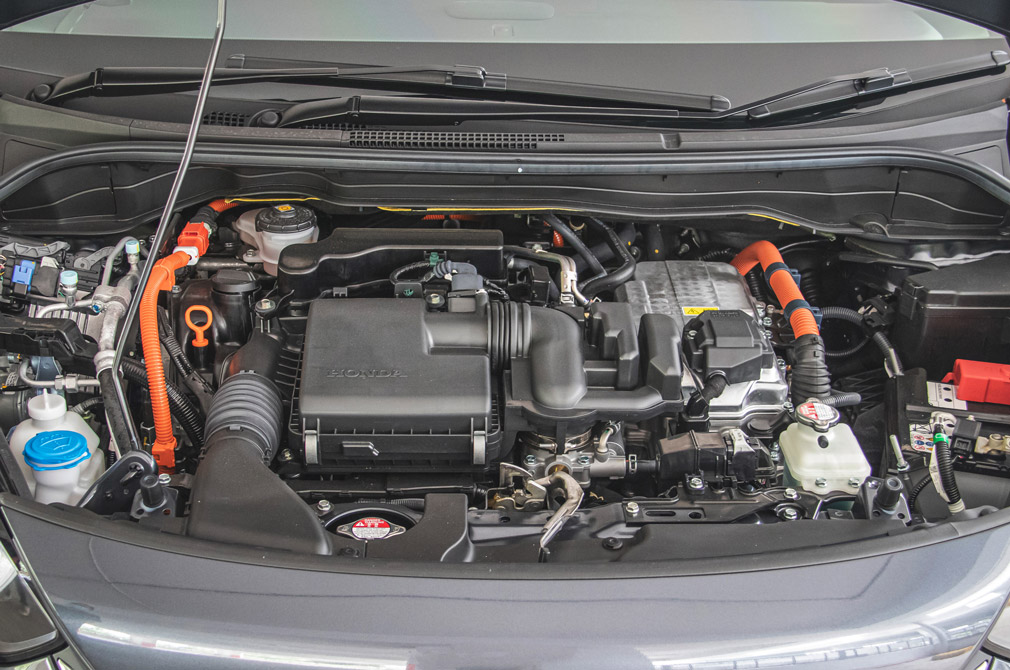 Jazz’s e:HEV can cover up to 26.3km per litre of unleaded.

This drivetrain is smooth, too. If you pay attention, you can tell when the engine stops and restarts, but the operation is unobtrusive – there’s no uncomfortable shudder whenever it is restarted.

That said, the Honda Jazz does not feel particularly quick. It has linear power delivery, so I assume that the engineers prioritised refinement over perkiness. Overall, the Jazz is quieter than the Note, especially when cruising.

Like the Jazz, the Note e-POWER is also a hybrid, but it is driven only by the electric motor. Its 1.2-litre petrol engine merely acts as a generator. Unlike the Jazz, it never directly drives the wheels.

Because of this, the Note feels as perky as an EV (electric vehicle), with its 280Nm giving it plenty of verve when taking off from a standstill. Nail the accelerator and the Note crosses the century mark in 9 seconds.

The downside, though, is that the engine’s stop-start function is more palpable. 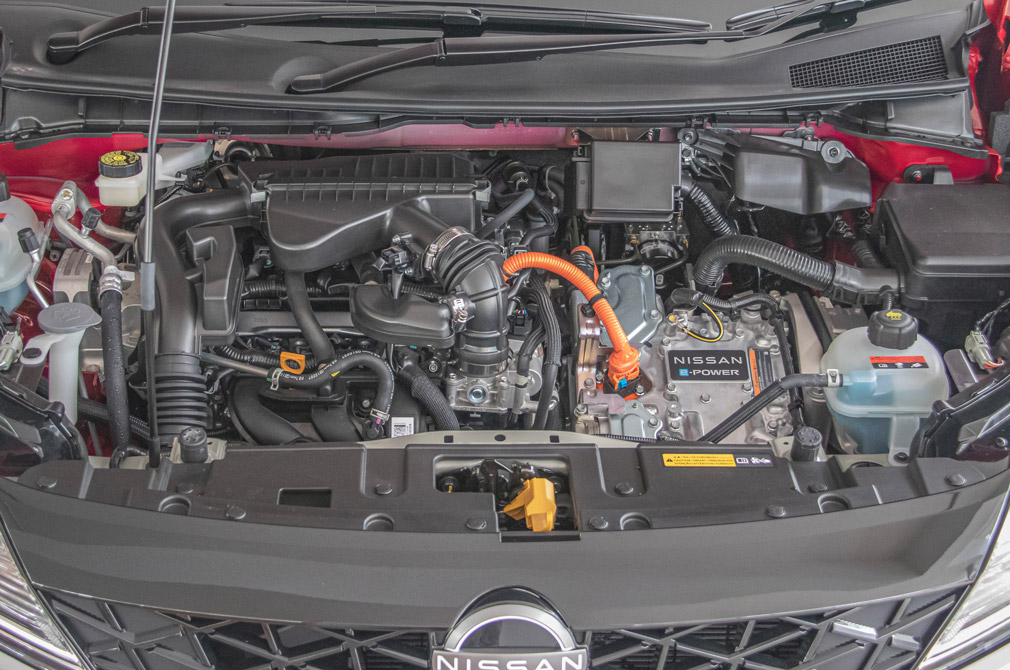 The Jazz’s e:HEV powertrain can cover up to 26.3km per litre. I eked out around 21km/L just by driving “normally”, which is impressive.

In the Note e-POWER, on the other hand, I managed just over 19km per litre. A good result, but the Jazz was still more efficient.

But don’t write the Note off just yet, for this supermini is more fun to drive than the Jazz. 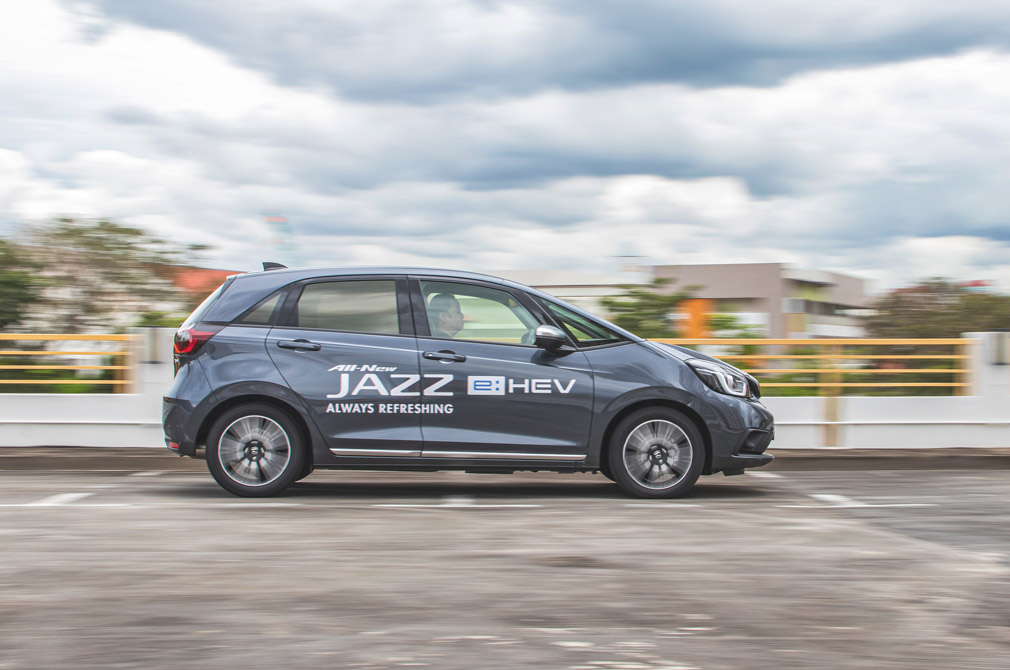 The Note’s eagerness off-the-line and lighter helm makes it the nimbler hatchback in this story. It also comes with more driving modes (the Jazz only has an Econ setting), my favourite of which is Eco.

Unlike the Jazz, choosing Eco in the Note does not retard the drivetrain’s responses or reduce the air-con’s throughput. What it does do is maximise the regenerative braking, which almost allows you to one-pedal drive the car.

In heavy traffic, being able to drive just by modulating the accelerator pedal lessens the stress on the driver. 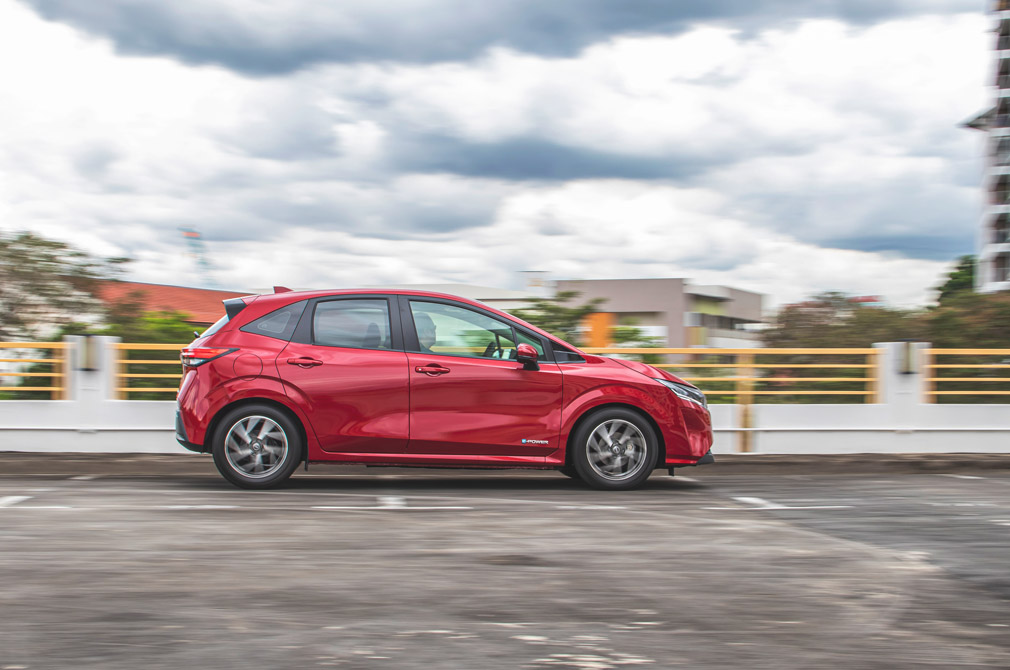 The Honda Jazz and Nissan Note may both be “musicians”, but they clearly play two different styles of music.

The Jazz’s e:HEV drivetrain is clearly superior when it comes to fuel consumption. Its interior has the edge in versatility and safety, thanks to its longer list of driver assistance and safety features.

These points make the $4100 premium it commands over the Note seem worth it.

Meanwhile, the Note has an arguably nicer design and to me, a better driving experience. I like how it feels like an EV to drive because of the instantaneous torque. It is also nimbler than the Jazz, which feels like a larger car.

But despite the Note’s perkier performance, nicer cabin aesthetics and less expensive price tag, I cannot ignore the fact that the Jazz is, all told, a more complete package.

In this story, its music is the one that is more enticing to buyers. 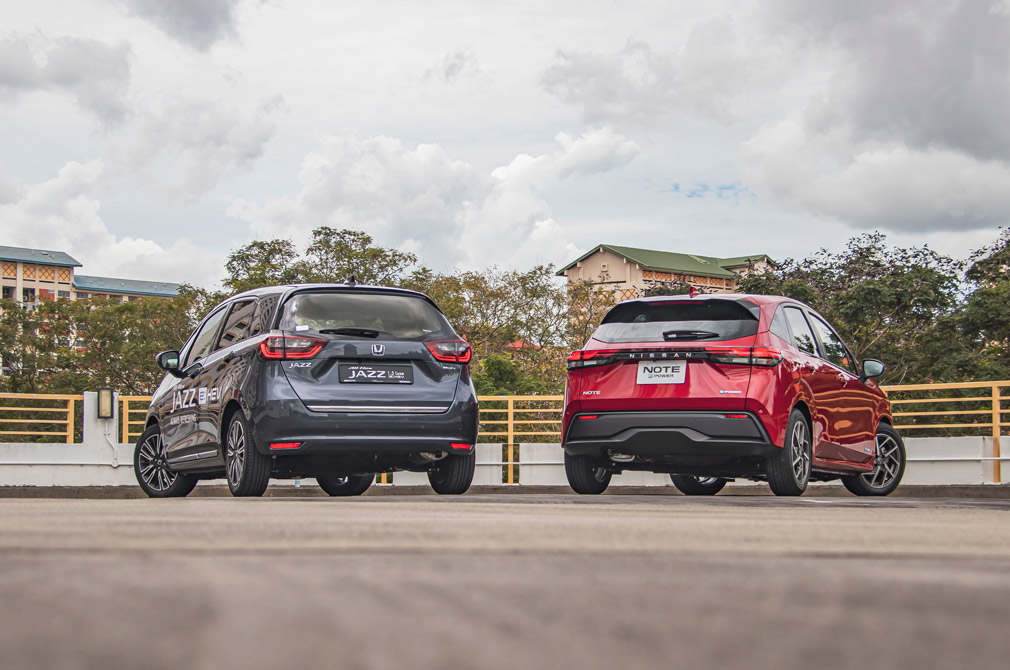 Click here for our review of the Nissan Note e-POWER
Looking for a seven-seater SUV? We pit the Renault Grand Scenic against the Peugeot 5008 in this Group Test