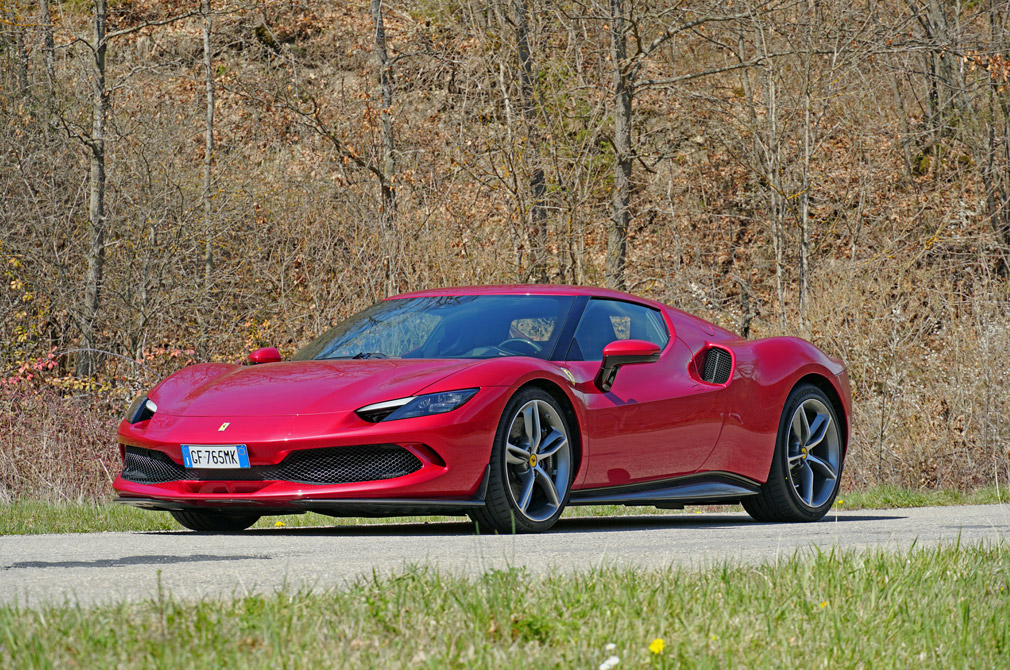 Ferrari’s transition from internal combustion to electric is well on its way, following the launch of the SF90.

The Prancing Horse’s latest salvo is the 296 GTB, its next-generation mid-engine plug-in hybrid sports car. It is not a replacement for the F8 Tributo, though, as both models will remain in production until the F8’s tenure lapses.

The 296 GTB has the same form factor as the brand’s mid-engine V8 coupes, but it is a more rationalised, streamlined version of the SF90, which has three electric motors, two of which drive the front wheels.

Meanwhile, the 296 GTB has a traditional rear-wheel-drive configuration. It uses a single electric motor paired to a new turbocharged V6 in a more conventional hybrid layout. A new 8-speed F-1 DCT with a mechanical reverse gear has been developed for this application. 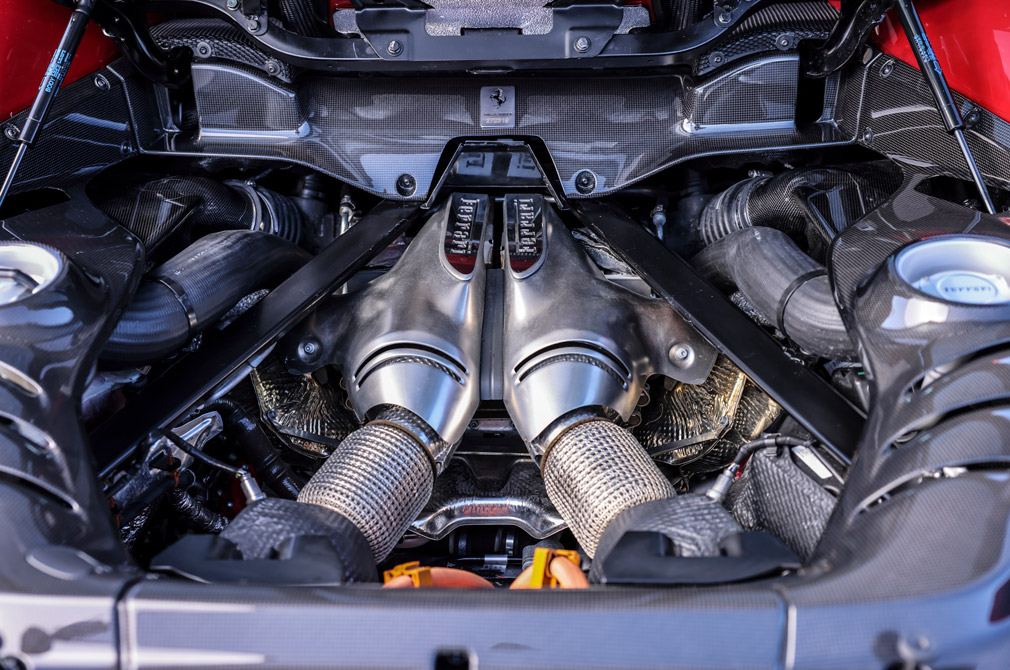 The wider angle provides a lower the centre of gravity and facilitates the placement of the turbos within the V itself.

Using an even firing order, Ferrari optimised the third harmonics of the V6’s exhaust pulse to recreate that of a V12, although this is perhaps at an octave lower.

It’s a decent approximation thanks to a hot-tube resonator transferring the exhaust sounds to the cabin, giving it clarity despite the turbo and particulate filters drowning out much of the lovely timbre.

Thankfully this 3-litre V6 does its best to make the right kind of noise because in Hybrid-EV mode, the 296 GTB is silent. If not for the synthetised noise, you wouldn’t know that anything was happening. It really feels odd to drive silent Ferrari. 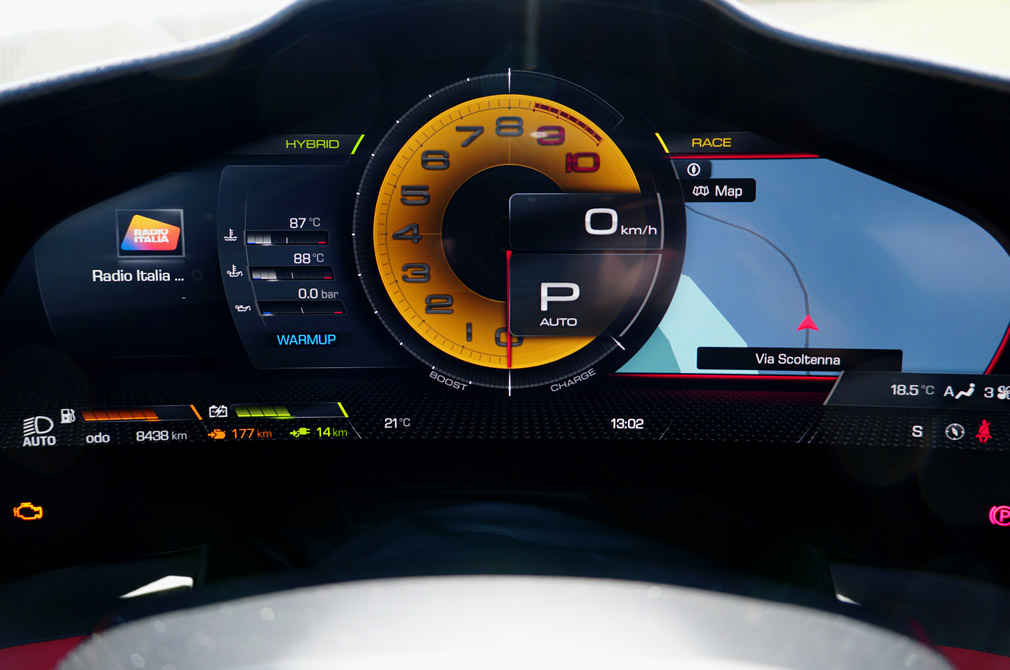 The electric motor is driven by a 7.45kWh battery. It gives the 296 GTB an electric-only range of around 25km provided you drive it like a Toyota Prius. Drive the car as intended and you’ll only eke out 10 or perhaps 15km – if you’re lucky.

The car can supposedly reach 135km/h solely on electric power, but at that speed it won’t be long before the battery runs out of juice.

Is there any value in a Ferrari that doesn’t make noise?

Yes. The noiseless mode will be much appreciated, perhaps by neighbours who do not wish to hear the start-up of a Ferrari. It might also be a boon in crowded city centres, for one cannot assume that every glance towards the car is an admiring one.

Now, although the 167CV produced by the electric motor might seem weedy, the 315Nm of torque is not. It really helps this small(er) turbo V6 at low revs by filling any gaps in power delivery. 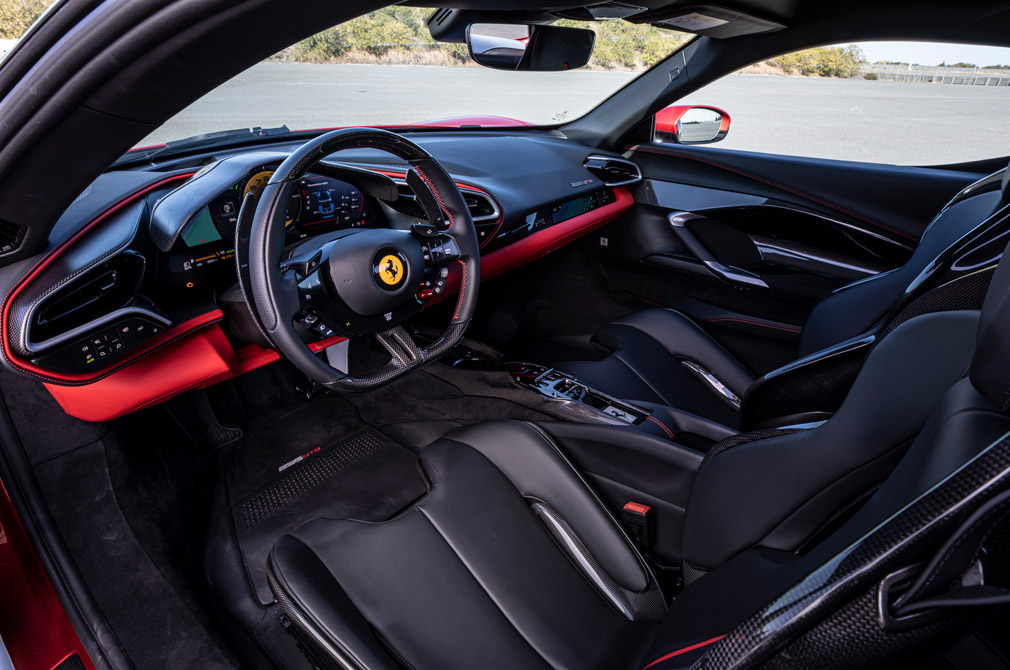 In Hybrid mode, the car tries to use the electric drive as much as possible. The engine cuts in when the computer managing the charge decides it needs some assistance – a function performed by the TMA (Transition Manager Actuator).

Is this hybrid V6 better than the V8 of the F8 Tributo? On the acoustic side of things, I am divided. Between a muffled turbo V8 and half a naturally aspirated V12, it is close. However, I am leaning towards the latter.

It may not have the roar of a naturally aspirated Ferrari V8 or V12, but this turbocharged hybrid V6’s power and throttle response is fabulous – even if the delivery is slightly elastic.

Adjusting and marshalling the total power of the 296 GTB is easier because the electric motor facilitates instantaneous control via the electronics. It is much quicker than the roundabout way of curtailing the power of a combustion engine.

In ideal conditions, the 296 GTB crushes the century sprint in 2.9 seconds. This seems to be as fast as a mid-engine car can go, given the traction limits of rear-wheel-drive.

A better indicator of the car’s brilliant performance is the zero to 200km/h time of 7.3 seconds, which is half a second quicker than the F8 Tributo’s time.

Aside from being quick, Ferrari’s new hybrid supercar also has scalpel-like handling.

I spent nearly five hours driving around the mountain roads surrounding Maranello, switching between Sport-Hybrid and Race-Performance mode with Bumpy-road activated because of the uneven surfaces. Some stretches even look like they haven’t been resurfaced since the Second World War. 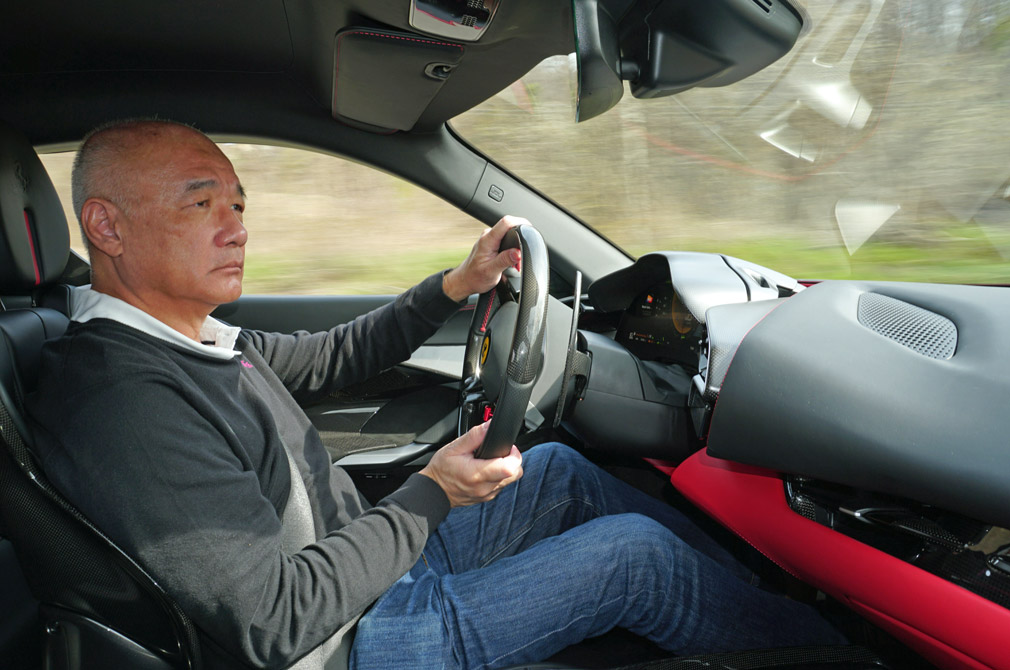 Sport mode is adept at quelling oversteer, but if you want tail-out fun, Race mode provides some wriggle room (or giggle room, if you like). The CT-Off setting, which turns off all stability and traction controls, is best saved for the racetrack.

For aside from the shoddy surfaces, there are all manner of poorly cambered corners, reducing radius and dangerous bends that suggest either the civil engineer did not care, or there was no engineering to begin with.

In spite of this, the 296 GTB scythes unerringly through the corners doing my (rather antisocial) bidding and refusing to put a foot wrong.

On the left side of the steering wheel is the e-manettino, which lets you select EV, Hybrid, Performance and Qualifying modes for the type of power delivery you want.

Qualifying mode, as its name suggests, compels the computer to squeeze every Watt of performance from the battery to eke out that one quick lap. Performance mode juggles with energy recuperation to keep sufficient charge in the battery for sustained levels of hard driving.

The default mode is Hybrid and while I did use it in the mountains, I always preferred the consistency of the traditional power delivery –always full-on. 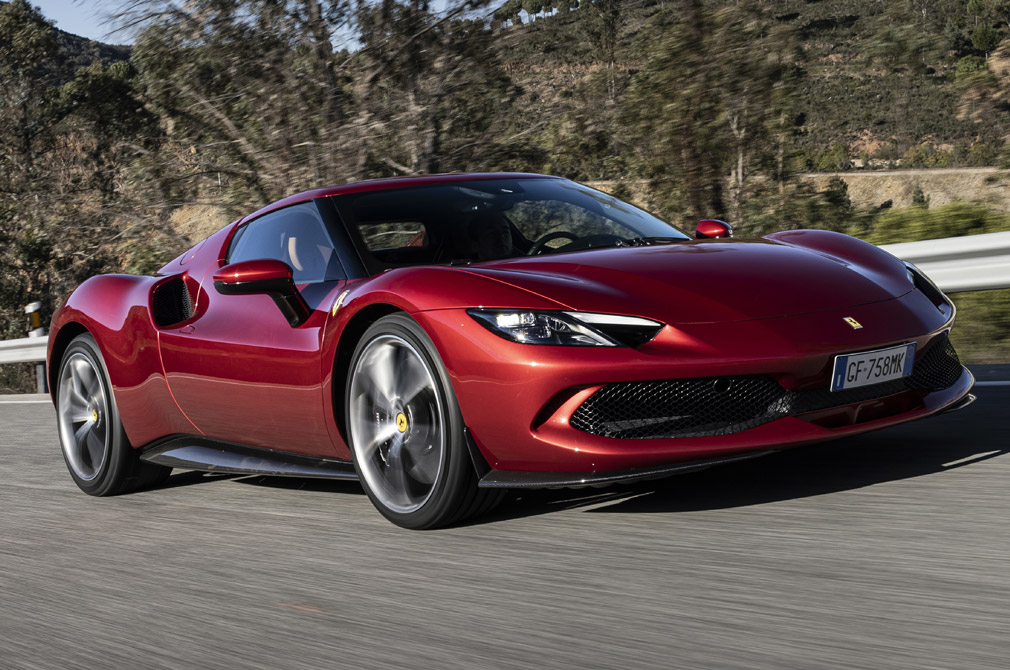 Unlike other hybrids with a quiet combustion engine, Ferrari’s V6 is vocal, letting you know precisely when it cuts back in. When this happens (which is rather often), the car goes from near-silent to aggressive roar.

When merely trundling through small towns, the 296 GTB usually uses the electric drive, helping it quietly glide under the radar.

The pure EV mode is a novelty. Onlookers will be surprised by a completely silent Ferrari wafting by, but in this mode, the car is not particularly quick. It is also neither sustainable nor much fun.

That said, the clarity of response from the new chassis is second to none, and the icing on the cake is the new brake-by-wire system called ABS Evo.

They are another level up on the F8 Tributo’s stoppers, and perhaps even anything Ferrari has used before. Slam on the brakes from 200km/h and the 296 GTB stops in 107m, an incredible 12m shorter than the F8 Tributo.

The bite on application is directly proportional to your input and powerful right up to the limits of adhesion – and beyond – when ABS kicks in. Plus, despite initial expectations to the contrary, these brakes still feel great even in crawling traffic. 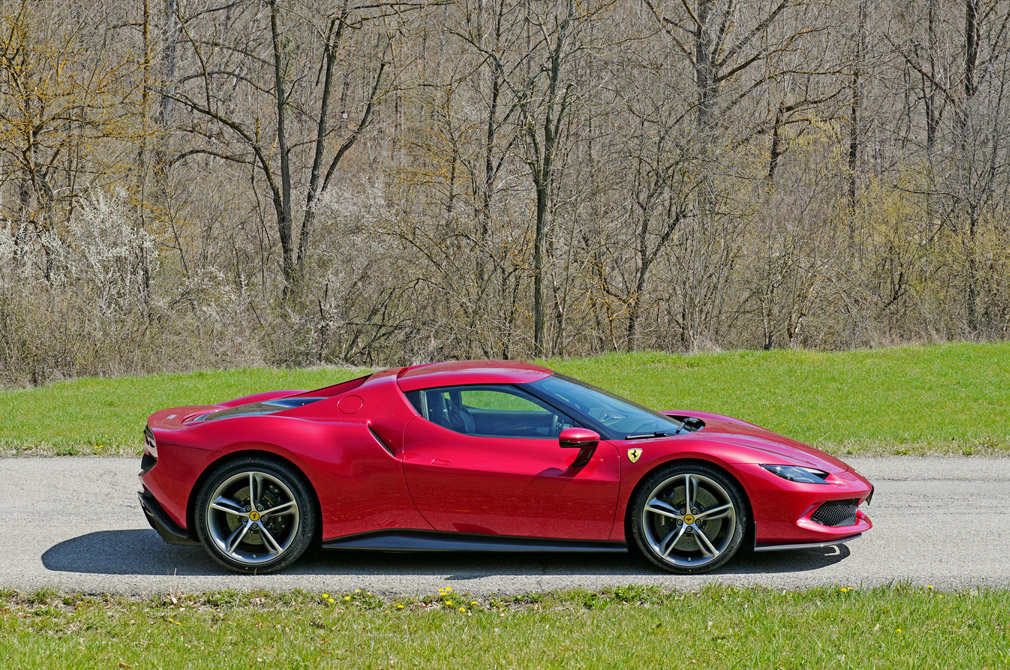 The 296 GTB is stupendously quick, outrageously agile and can stop on a dime. But its most distinctive feature is its design. Can you imagine something this beautiful generating 360kg of downforce at 250km/h without a wing in sight?

Ferrari’s styling maestro Flavio Manzoni’s obsession with gaining downforce without the use of wings or flaps has paid off handsomely in the 296 GTB. The air flows are directed around or through the supercar’s bodywork and hot areas to extract heat and counter lift.

For those seeking even greater levels of sportiness, there is a special performance package for the 296 GTB called Assetto Fiorano.

Aside from the paintwork, it includes a set of special racing-derived adjustable Multimatic shock absorbers optimised for circuit use, carbon fibre addenda for the front bumper that adds 10kg of downforce and a lightweight Lexan rear screen that saves 15kg.

There are also redesigned bits of carbon fibre trim for the exterior and interior that can further shave another 12kg. Also available as an option are track-optimised Michelin Pilot Sport Cup 2 R tyres.

It may be a modern Prancing Horse, but the beefy wheel haunches, flat engine deck and iconic tail profile are inspired by the 1963 250LM. Make no mistake, though, the 296 GTB sets the tone for the next generation of Ferrari models.

Being electrified has not handicapped its abilities. In fact, the 296 GTB is a superb precision driving machine that has managed to reset the bar of this genre. Don’t get too close while admiring it, for it is a deeply impressive machine and you will want one, badly. 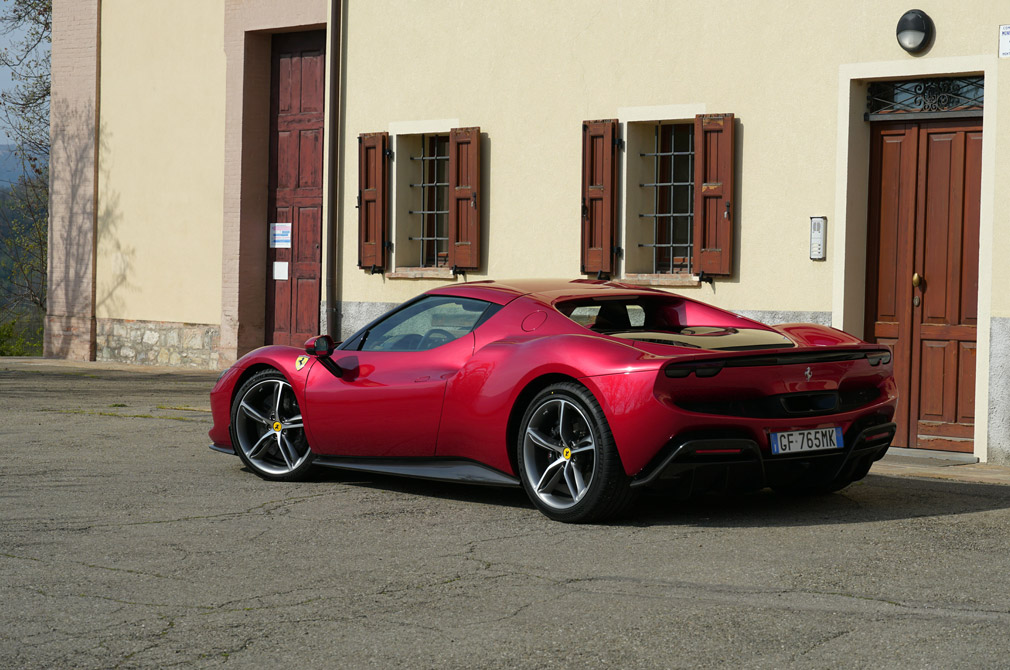