Ferrari’s mid-engine V8 models have always had an open-top version since the days of 308 GTS, which is a Targa with a manually operated hard-top.

The canvas soft top made its appearance in the 348 Spider alongside the 348 ts (Targa hardtop). The 355 series also maintained the soft-top Spider and the hardtop GTS models until the Ferrari 360 arrived.

At this point, the Targa was dropped, and the soft-top Spider remained the only other variant. This was true for the 430 as well.

However, when the 458 Italia arrived, a retractable hardtop version replaced the soft-top, and it this was called the new Spider.

This continued through the 488 models to the Ferrari F8 today. The advantage of the retractable hard-top is that it can open and store itself in just 14 seconds, even while the car is moving up to a speed of 45 km/h.

Also, the beautiful shape of the F8 Spider remains faithful to that of the F8 Tributo. 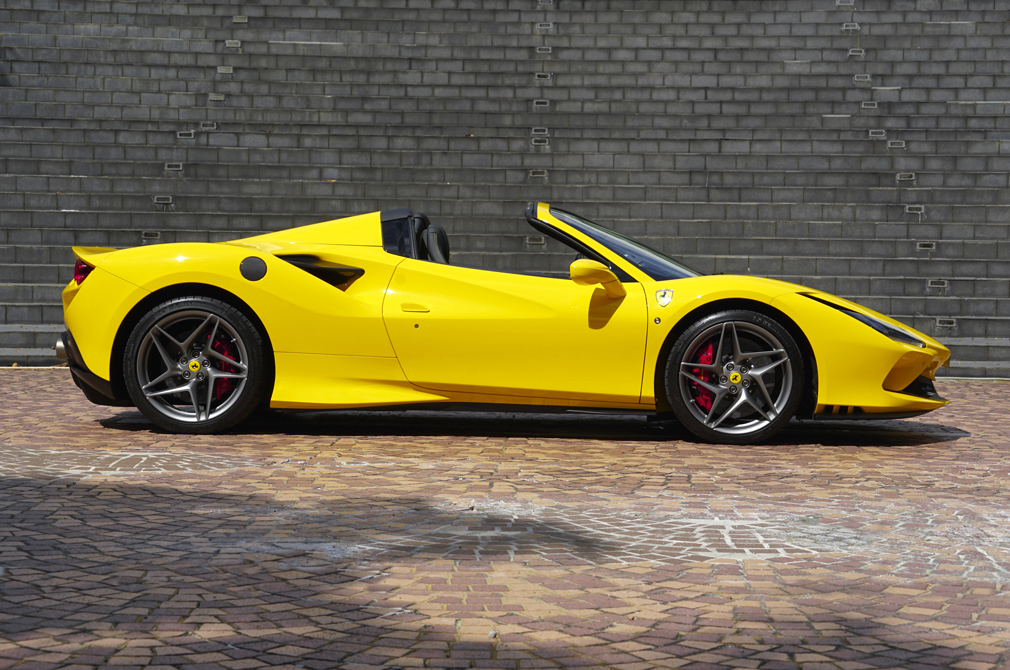 Though the Ferrari F8 Spider tips the scales at 1400kg, it is only 70kg heavier than the Tributo, due to the hardware of the retractable hardtop and the reinforcement of the open-top chassis.

Ferrari claims both the F8 Tributo and F8 Spider go from zero to 100km/h in 2.9 seconds.

The former is more impressive with regard to the zero to 200km/h sprint, finishing it in 7.8 seconds. The Ferrari F8 Spider takes 8.2 seconds, or nearly half a second longer, to manage this.

However, both models can reach a spectacular top speed of 340km/h, showing how close the aerodynamics is for both these cars. 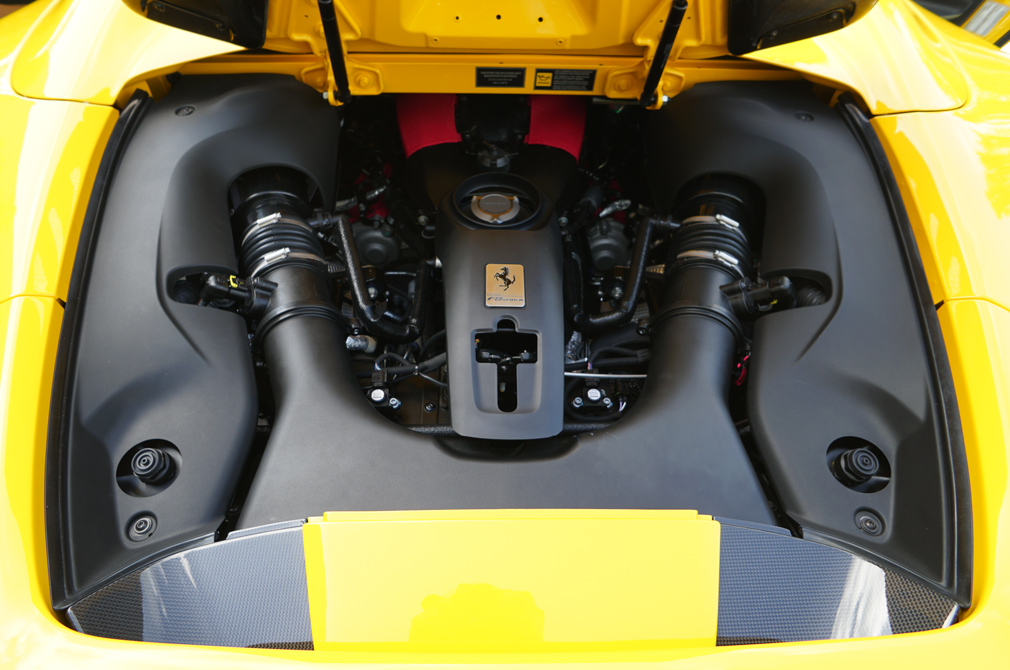 The Ferrari F8 Spider’s award-winning engine is the piece-de-resistance here. This 710hp (720CV) twin-turbocharged V8 is what the F8 Tributo is paying tribute to, and there is plenty to be awed about.

Although the turbochargers and the new particulate filters have really attenuated the exhaust sounds, the soundtrack is still there to be savoured – even if it is a tad muted.

Yes, it is not as visceral and omnipresent as in the 458 Italia. Fortunately, the Inconel exhaust system in the Ferrari F8 Spider adds that characteristic metallic timbre to the soundtrack.

Ferrari’s engine design limits the torque and shapes the curve to resemble the rising torque of a naturally aspirated engine in the first three gears.

This differentiates this engine from others that try to wring every bit of torque from low revs, thereby allowing turbo-lag to spoil the fun.

While you do sense the turbo at work in the Ferrari F8 Spider, it does not irritate like most other turbos do with an elastic delivery of the power – not there when you want it and too much of it when you do not want it.

Use it with small throttle openings and it tries its best not to strain at the leash. In the default Sport mode, the Ferrari F8 Spider is very docile indeed.

The engine response is suitably softened as are the gear shifts, with the gearbox quickly selecting a taller gear. 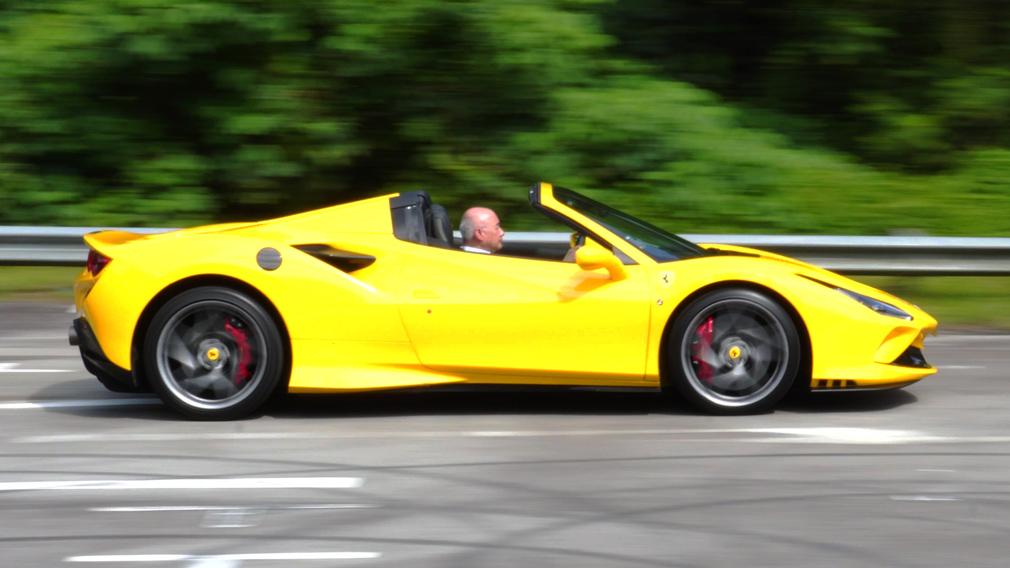 NOT A BOULEVARD CRUISER

If you mash the throttle to carpet, you better make sure there is no traffic up ahead. The F8 Spider’s “warp drive” is very real, and you will arrive at the horizon alarmingly quicker than you expect.

Surprisingly in Sport mode, the Ferrari F8 Spider provides a very supple ride over the beaten tarmac that makes up much of Singapore’s road system nowadays.

Mind you, the F8 Spider is shod, not with Pilot Sport 4S tyres, but with Michelin Pilot SuperSports which are better known from their sharp steering and superlative grip instead of their ride quality.

This makes the Ferrari F8 Spider a tolerable everyday supercar. Beneath its striking body is a decently sorted chassis, even with the dampers at their softest settings.

If one is being critical, select Race mode to get much better control of the body movements for sharp handling characteristics. 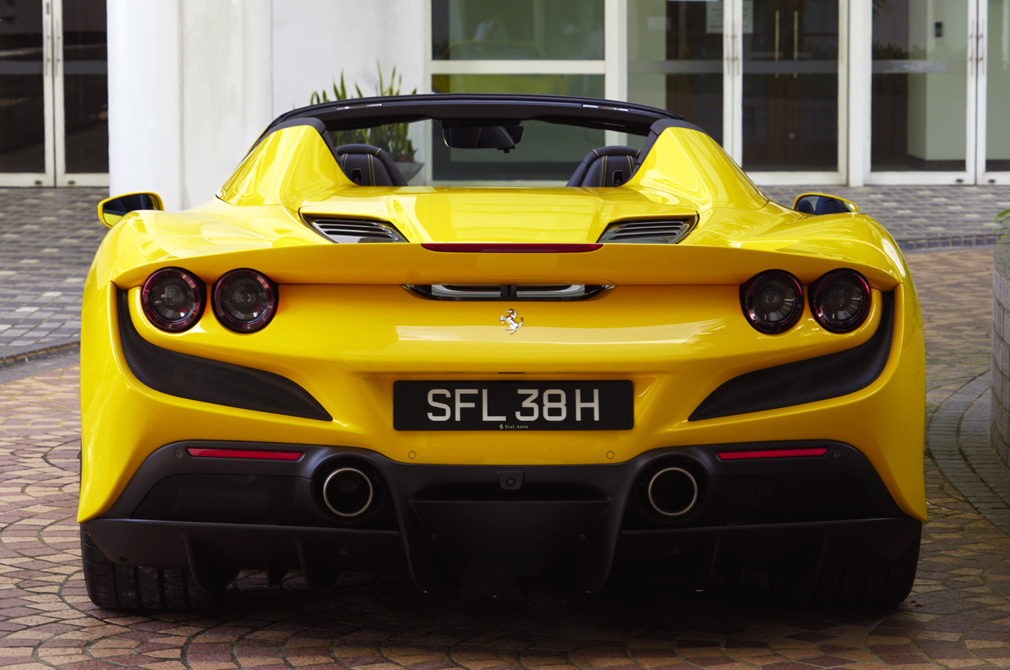 However, the downside to this setting is that the ride gets a tad too jiggly on the rougher patches. This is not an issue if one is in an aggressive mood, but it is a little tiring if one is merely pottering about town.

Perhaps one can stay in Race mode but select “Bumpy Road” setting for the dampers which reduces the damping sufficiently to take the worst out of the road imperfections.

In Race mode, both engine and transmission are primed for action. Fortunately, the transition is subtle and does not transform the Ferrari F8 Spider into a snarling beast.

The characteristics are not just for effect but are what a brisk drive really needs. Best of all, the transmission does not remain annoyingly in lower gears all the time. 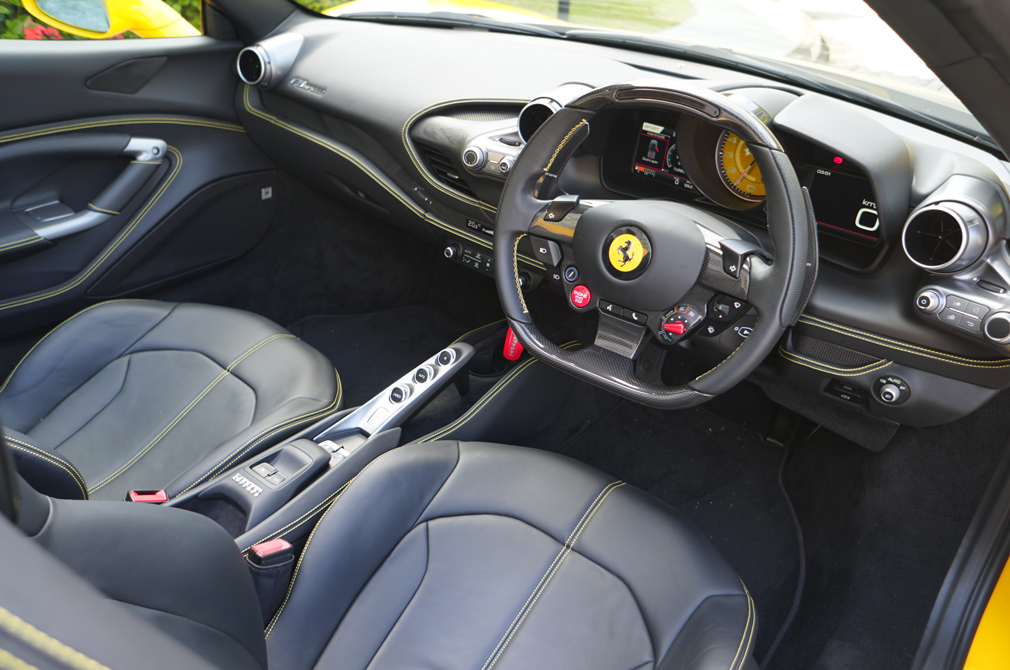 While I respect the engine, it is the steering that is a real revelation. Ferrari has never really been about steering feel but the one on the F8 Spider stands out despite being electrically assisted.

Suddenly, there is an added level of intimacy with the road and it really changes how one enjoys the car. While there is speed aplenty at one’s disposal, a good amount of road texture and feel filters through the steering, allowing any drive to be appreciated even at low speeds.

Yes, the Ferrari F8 Spider is mind-bendingly fast, but it is not intimidating. Both the chassis and electronic nannies are well up to the task of properly harnessing all its power through just two rear driven wheels.

The SSC 6.1’s ability to electronically juggle power between the rear wheels, along with intelligent independent wheel braking to stabilise the F8, really lowers the amount of steering, brake and throttle corrections needed when things so slightly awry. 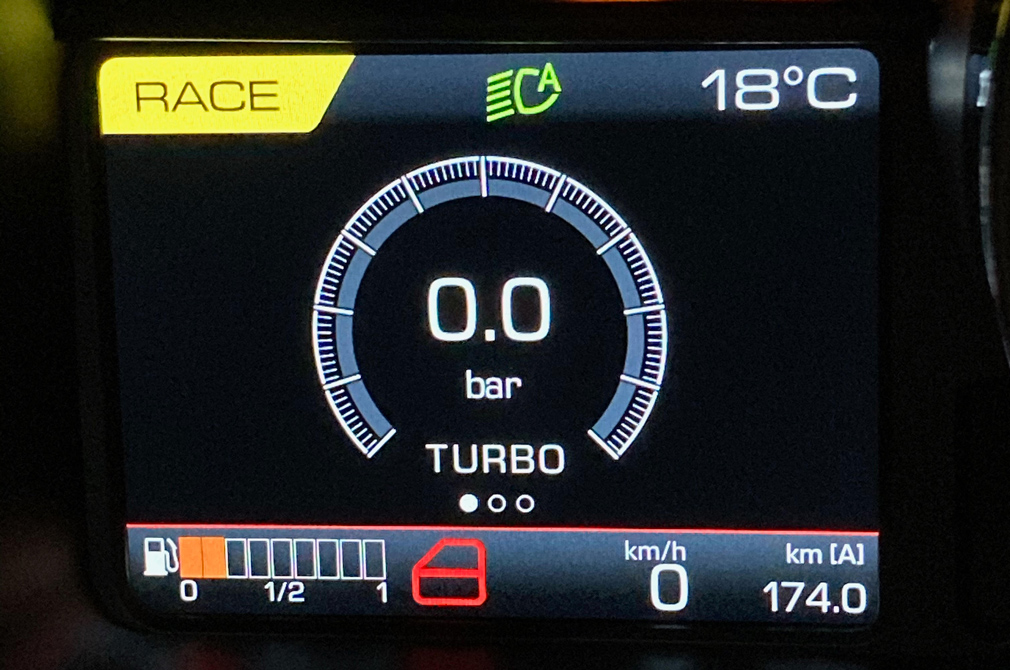 Nail the throttle when the lights turn green, and you can sense the SSC metering out just the right amount of torque to keep the sticky Michelins at the very edge of its adhesion as the Ferrari F8 Spider rockets away.

It is amazing that this sort of acceleration can be wrought from just the grip of the rear tyres alone.

This makes you all the more appreciate Ferrari’s efforts at keeping the front wheels free from the “corrupting effects” of torque, and sending it all to the rear where it can do other naughty things.

Everything said about the Ferrari F8 Spider is true of the F8 Tributo as well.

It also adds the dimension of open-top motoring, where the rush of turbulent air and unattenuated engine sounds elevate the drive experience beyond what the closed coupe offers.

Does this make the Ferrari F8 Spider a better choice than the F8 Tributo? No. Neither choice is wrong, for each model simply offers different icing on a very fabulous cake. 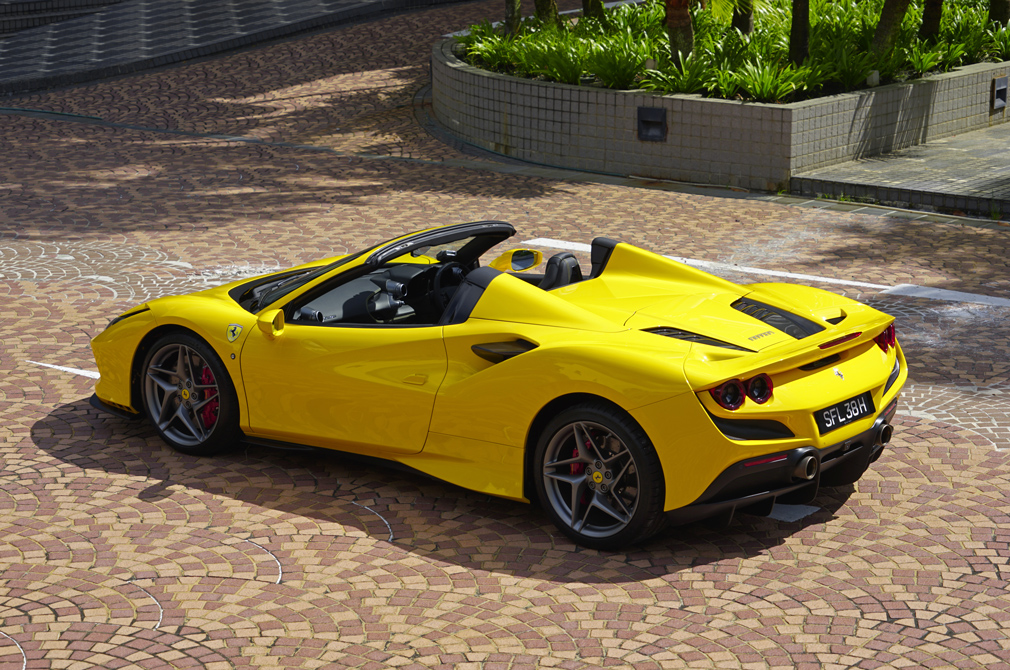