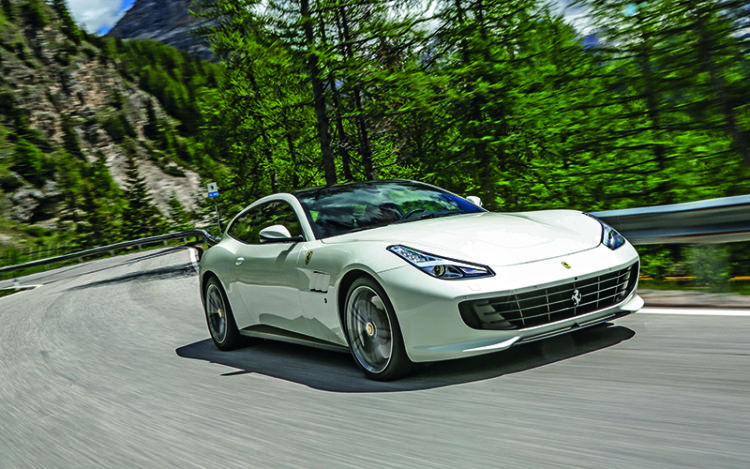 When Ferrari introduced its first all-wheel-drive model, the FF, five years ago in 2011, many Prancing Horse fans didn’t approve of the controversial “shooting brake” styling.

But for actual customers, it was the only four-seater Ferrari they could buy. The break with the marque’s rear-drive tradition was inevitable, given how the horsepower war has crossed the 600bhp mark.

The replacement for the FF is the GTC4Lusso – “GTC” stands for Grand Touring Coupe, “4” refers to the car’s four-wheel-drive, four seats and newly specified four-wheel-steer, while “Lusso” simply means Luxury in Italian.

The newcomer also spells a return to Ferrari’s traditional alphanumeric designation, which stretches as far back as 1963 when the company introduced the 250 GT Lusso, a V12 grand touring coupe. The Lusso wasn’t made with 2+2 seating, but a variant called the 250 GTE was.

The FF’s controversial styling has been addressed by the GTC4Lusso. It still follows the original form of the FF, but looks far more attractive with its subtly sloping roofline, noticeably pinched waistline and appropriately slender side profile.

I find the rear design changes to be the most impactful. There are two pairs of round tail-lamps instead of the single units previously, and they’re positioned further out to the sides so as to emphasise the car’s broad shoulders and offset the truncated tail of the “shooting brake” shape. At the front, there’s a new grille and redesigned LED headlights. Together, they give the menacing appearance of a feline about to strike.

Even at a standstill, the GTC4Lusso looks tense and dynamic, and is also far easier on the eye than its predecessor. 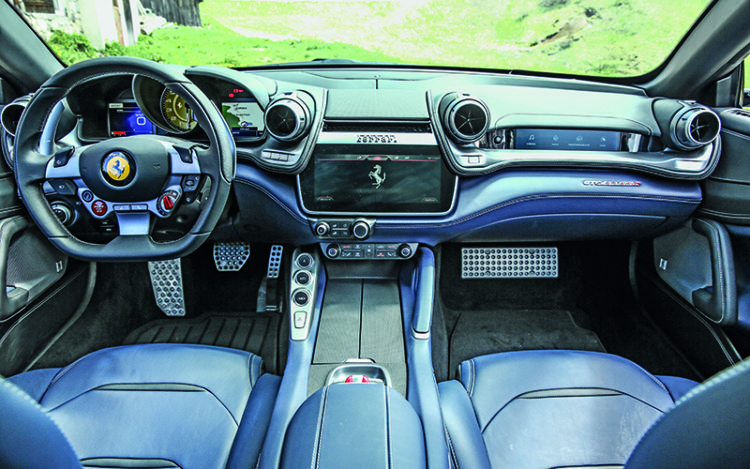 Inside the 2+2 cabin, the basic architecture is similar to the FF’s, but with fresh colours, equally fresh stitchings and a far more luxurious feel.

One highlight is the large 10.25-inch central multimedia touchscreen with an Apple-inspired interface. Another highlight is the driver’s instrument binnacle, whose single centrally placed analogue tachometer is flanked by a pair of configurable LCD screens, which can display a multitude of vehicle data, ranging from the usual trip computer info to different performance parameters/selections.

The vehicle’s Dual Cockpit concept means the co-driver gets an in-dash display that mirrors some of the information shown in the driver’s instrument panel, such as engine rpm, road speed, Manettino setting, gear position and even g-force.

Above said display is a new air-conditioning diffuser that has replaced the centre vent and provides a diffused flow of cool air rather than a blast.

Those backseats are more accommodating than the ones in the Porsche 911 and comfortable enough for two average-sized adults. Making the journey more pleasant for everyone on board is the panorama roof option.

Under the long bonnet of the GTC4Lusso is essentially the same naturally aspirated 6.3-litre V12 as before, but with a piston head design borrowed from the F12tdf, which ups the compression ratio to 13.5 to 1 (from 12.4 to 1) and keeps the maximum revs at 8250rpm.

Power has been pushed to 690bhp and torque has been increased by around 5 percent throughout the rev range, peaking at 5750rpm with 697Nm. Despite its ferocious outputs, this V12 is a little less thirsty than the previous motor and emits 10g/km less CO2. 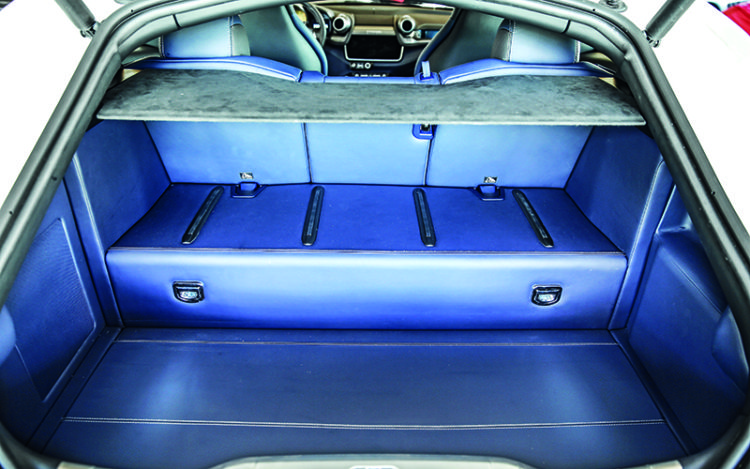 During the past five years, Ferrari discovered that FF owners clock an average of 50 percent more kilometres per year compared to owners of other Ferrari models, and 60 percent of those trips are done with three or four occupants on board. The same owners take their FFs through conditions that owners of traditional Ferraris wouldn’t normally tackle, such as snow and sandy areas.

Hence the unique all-wheel-drive solution offered by the FF (4RM) and improved by the GTC4Lusso (4RM EVO). Said solution takes its drive, via two gears, from the front of the V12 engine and only operates when there is slip at the rear wheels in the first four gears of the 7-speed F1-DC dual-clutch transmission.

In extreme driving scenarios, the system can divert up to 90 percent of the power to just one front wheel. Most of the time, all the power is sent to the rear, thereby maintaining a distinct rear-drive characteristic.

The performance is hot, too, of course. Using launch control, the GTC4Lusso can hustle from a standstill to 100km/h in a blistering 3.4 seconds – 0.3 of a second faster than the FF. The top speed remains unchanged, and unuseable in most places, at 335km/h.

The V12’s power band has been tailored to suit the car’s grand tourer billing, so there’s a wide spread of strong torque to enhance driveability and flexibility, both of which are more important than sheer raw horsepower in this case. Up to 80 percent of the ample torque is available from just 1750rpm, and over 500Nm is already on tap at 1000rpm, so this V12 Ferrari can waft along effortlessly.

Even so, it’s far from being a muted Ferrari experience. At full wick, it’ll still deliver the much-loved Ferrari howl, and without the muffling effect of turbochargers. With the windows up, the cabin is pretty quiet, but with the windows wound down by just a little, the piercing 12-cylinder soundtrack will flood the cabin. 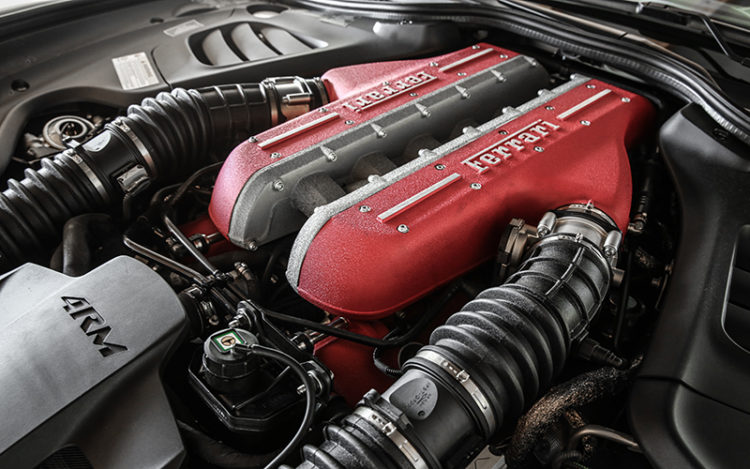 Overtaking is ridiculously easy, thanks to the surfeit of power pouring out from the motor. In Sport mode, the gearbox shifts its gears in 60 milliseconds. You can either downshift manually using the column-mounted paddles or simply stomp down hard on the loud pedal, and the car leaps towards the horizon, accompanied by a spine-tingling war cry of intake, exhaust and mechanical cacophony.

It’s so addictive that I find myself overtaking other vehicles just for the dopamine hit. Even with the sophisticated active suspension, SCM-E (Sospensioni a Controllo Magnetoreologico), operating the latest Magnaride electronically variable dampers, further improvement to the handling could no longer be achieved by just tuning the spring and damper rates, so the engineers turned to four-wheel-steering.

The system uses special algorithms, in addition to the usual in-phase for high-speed stability and counter-phase for low-speed agility. The complex geometrical changes enhance turn-in response and stabilises the car as it tackles corners, even with the substantial torque vectoring that the latest SSC4 (Side Slip Control 4th generation) is capable of.

Thankfully, I could not detect its helping hand during the long tortuous drive in the mountains. The SSC4 now controls more functions than even the 488 GTB or F12tdf, such as the SCM-E, E-Diff (electronic differential), F1-Trac (traction control) and the 4RM EVO (four-wheel-drive with four-wheel-steer).

In the corners, the GTC4Lusso displays phenomenal grip and handles eagerly, all with razor-sharp precision. Driven hard in Sport mode, the car’s composure is unshakeable, refusing to understeer or oversteer, thus enabling very clean lines through every turn.

To get oversteer, you’ll need to turn the Manettino to ESC Off (every stability aid deactivated), giving the electronic nanny some time off and leaving the fate of the drive entirely in your hands.

Tipping the scales at about 1.8 tonnes without fluids, the GTC4Lusso is heavy and large. Even with that huge V12 in front, it still manages a 47:53 weight bias towards the rear, which helps the agile handling. 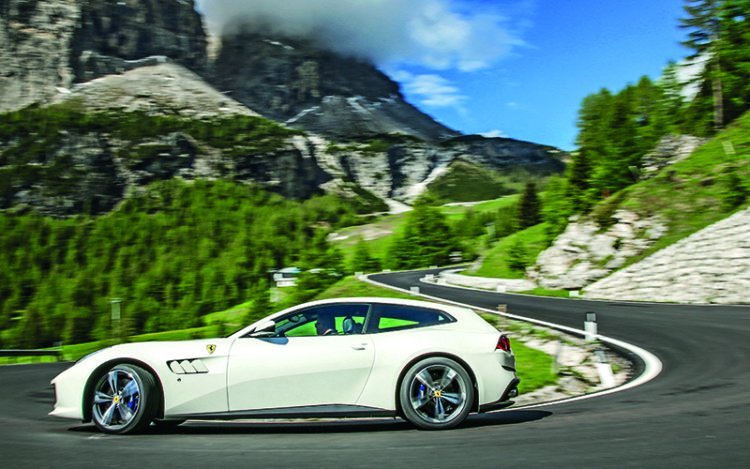 All the controls, like the steering and pedal weighting, are perfectly judged to take the heft out of the task, but leave enough for the driver to know he’s piloting something special.

The most impressive aspect of the drive has got to be the fantastic front-end grip as I scythe through the countless hairpin turns of the Tirol mountains, with no fear of the tyres sliding wide. While there is not much in the way of steering feel, there is superb precision plus positivity, as the chassis is totally obedient to commands from the helm.

Ferrari may call it a tourer, but make no mistake, the GTC4Lusso is a technological tour de force, packed with so much high tech, one would need an engineering degree to understand every feature.

Luckily, driving it well does not require the skills of Sebastian Vettel, because the sophisticated on-board computers work seamlessly behind the scenes to flatter ordinary drivers and elevate their perceived driving skills to the level of professionals, delivering a flawless performance on every ride/road.

The GTC4Lusso looks more attractive than the awkward FF, while retaining its four-seater cabin and 800-litre luggage capacity.

Today’s most practical Ferrari is no longer the tame machine that’s the 456 or 612. Instead, it’s a full-fledged Ferrari as capable as the 458, but nowhere as intimidating as the F12.

The GTC4Lusso may have been developed for bad-weather motoring, but it is also Ferrari’s most user-friendly supercar.

The user in question must be able to afford the hefty price – $1.3 million on the road in Singapore. It will arrive at Ital Auto in the first quarter of next year. 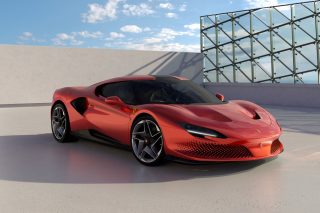