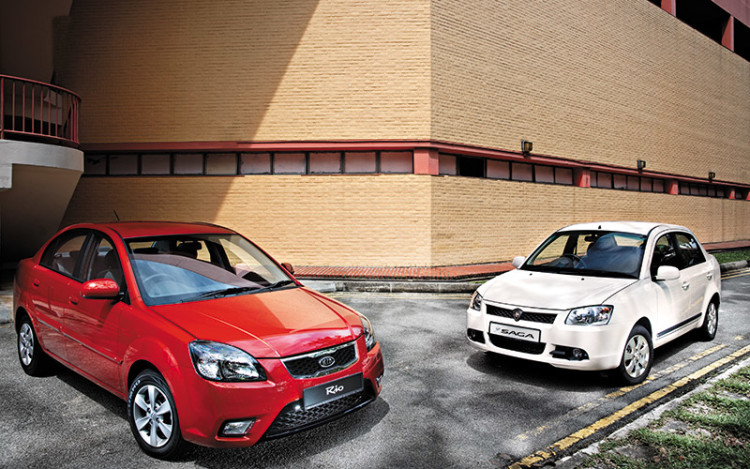 Creating a cheap car is a piece of cake, but also making it tasty enough for the target audience is tough. It’s tempting to call this group of consumers the lowest common denominator of motoring, but even these people who regard cars as mere household appliances know there is a difference between “cheap” and “cheapo”.

Here are two relatively cheap cars which are pretty palatable. The Proton Saga should be familiar to those who like to drive across the Causeway, where its predecessor was the original Proton for the Malaysian people and stayed in production for 23 years straight. 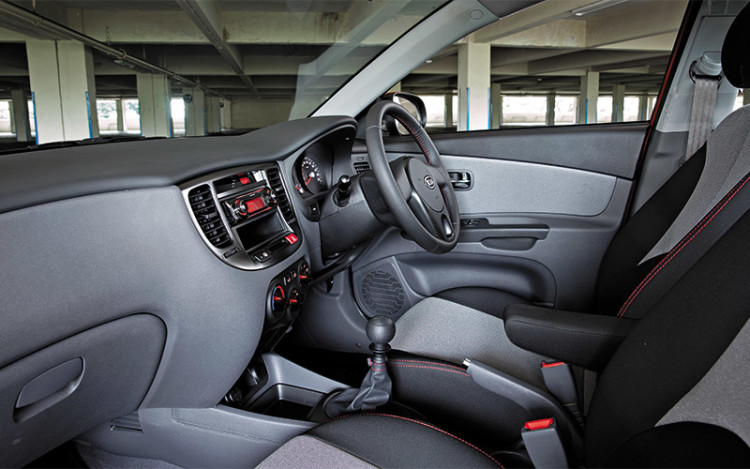 Rio cockpit is better built and better equipped compared to the Saga’s.

Finally replaced in January 2008, the Saga continues with this second-generation model based on the Savvy platform.The Kia Rio also sits on a shared floorpan, that of the Hyundai Verna (no longer on sale here), and benefits from several useful upgrades as part of model year 2010.

We might have to wait till 2015 or so before the current Saga gets a facelift, because the last Saga only got its first major update (becoming the Iswara) seven years after its debut. 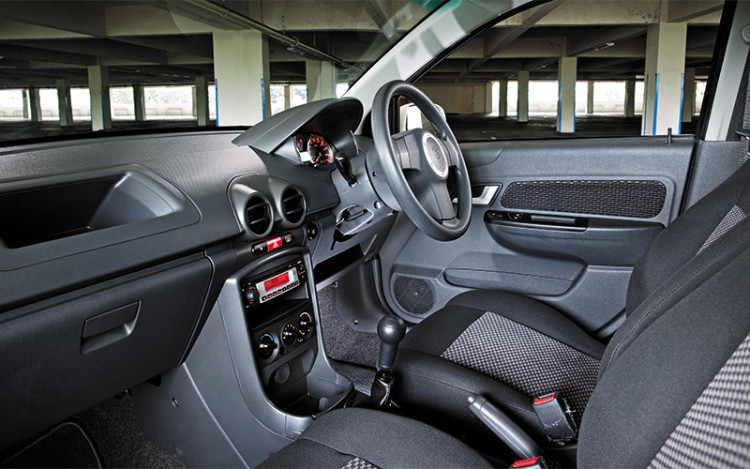 Saga’s cockpit scores higher than the Rio’s in terms of utility.

The Saga and Rio are similar in length and width, but the Korean car has a lower roof line, a longer wheelbase and broader wheel tracks. Coupled with tasteful new modifications like a chromed grille, smoked headlights, a dramatic front airdam and a dummy rear diffuser, the revised Rio looks sharper than the Saga. The Proton is a simpler design that looks slightly awkward from certain angles.

The black rubbing strips across the doors are rather old school, but the grab-type handles and seven-spoke aluminium rims are as modern as they come. The Rio uses alloy-look plastic wheel covers instead, which are actually quite spiffy. Rio’s backseat is less spacious than the Saga’s.

In line with the Saga’s simplicity, the fanciest body colour available here is Chilli Red (the Malaysian market offers Zircon Green and Mountain Blue too), whereas the local Rio buyer can choose from stylish shades like Sunset Orange, Sapphire and Cashmere Beige. Paintwork quality, however, appears to be equally patchy on both vehicles.

Before I even get into the two cars, the Rio is already ahead of the Saga, thanks to a “switchblade” key whose buttons and their operation are more user-friendly than the Proton’s tacky affair. 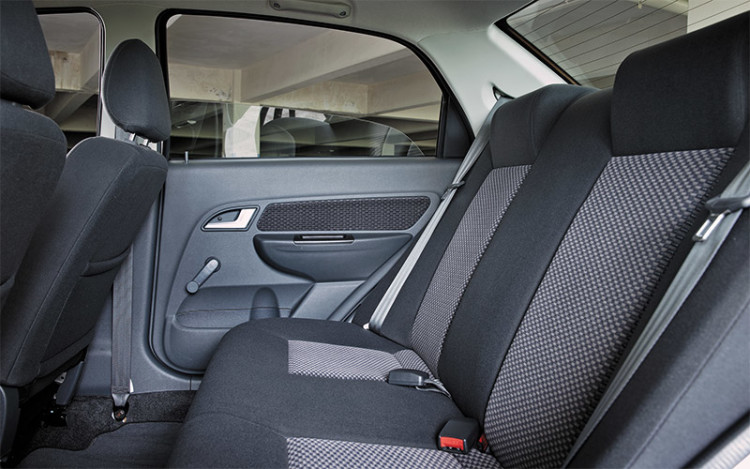 First impressions behind the wheel again see the Kia in front. It has a more agreeable driving position (complete with a footrest which the Saga lacks), clearer views from the three mirrors and a more logical layout of controls. The side mirrors’ adjuster, for example, is on the armrest together with the power window switches, unlike the Proton’s which is perfectly blocked by the steering spoke at 3 o’clock.

Both wheels have a limited tilt function, but the front seatbelts are height-adjustable in the Rio and (poorly) fixed in the Saga. The driver’s seat squab in both cars is flat, but the Proton provides a tad more torso support and softer, more comfortable cushioning. The Kia strikes back with an integral foldable armrest and nicer upholstery. 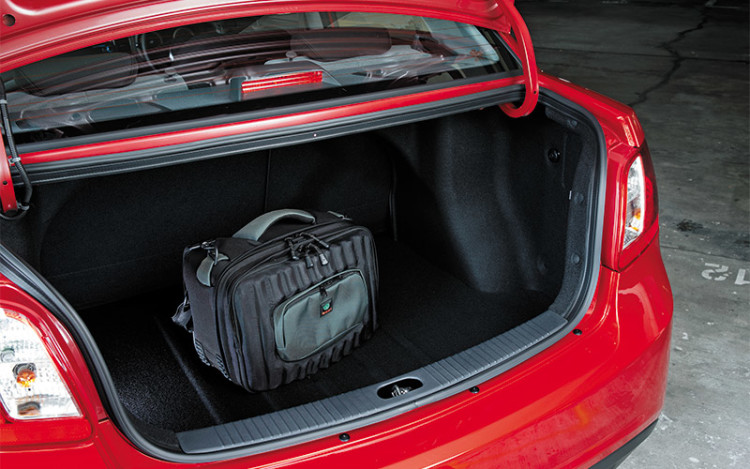 Rio’s boot is less spartan and more versatile than the Saga’s.

Rear occupants will be happier in the Saga, which is significantly roomier than the Rio, especially overhead. Proton has cheated a bit by installing a low, flat bench seat and mounting the front seats on rails raised well clear of the floorboard, but the extra space squeezed out for passengers is what matters most. Door bins and seatback pockets more practical than those in the Kia take care of loose items.

Bigger items, perhaps groceries bought in bulk in Johor Bahru, can fit easily inside the Saga’s sizeable boot. The Rio cargo hold is similar in size and shape, but it adds the flexibility of standard split-fold. A space-saver spare, instead of the Proton’s full-size tyre, creates space for an organiser, but it probably won’t survive the rigours of “boot camp” because it’s made of flimsy styrofoam. Interestingly, Proton bothered to paint the under-boot section properly – it’s just a splotch of overspray in the otherwise more quality-conscious Kia. 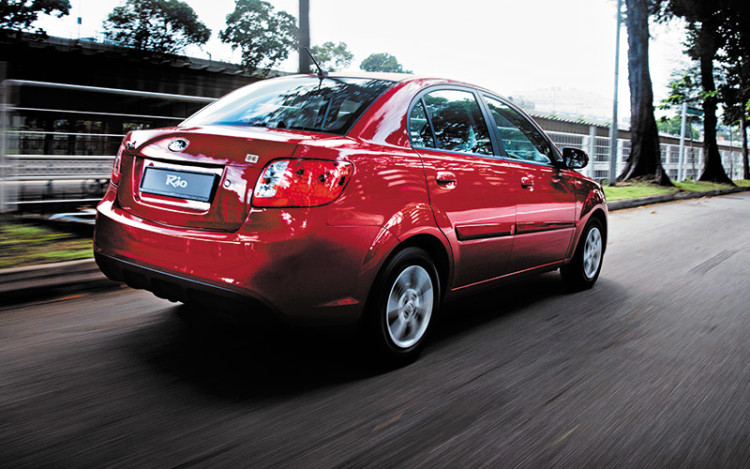 On the road, the Rio is superior, to put it nicely. To be perfectly blunt, the Saga is inferior by a country mile. Its 1.3-litre engine has the same power and almost the same torque as the Rio’s 1.4 and its kerb weight is some 100kg lighter, but the Proton struggles to gain momentum, whether away from the traffic lights or overtaking on the highway. And working the manual gearbox is not merely hard work, it’s torture. If I’m feeling generous, I would describe the gearshift action as rubbery; if I’m feeling unkind, I would say it’s rubbish. Even the knob is horrible.

The Rio is no sports car, but the way it goes through the gears and accelerates is so much better than the Saga that it feels like a Supra. Gear changes are a lot more precise, the notchy throws are much shorter and tighter, and the clutch pedal is cooperative. 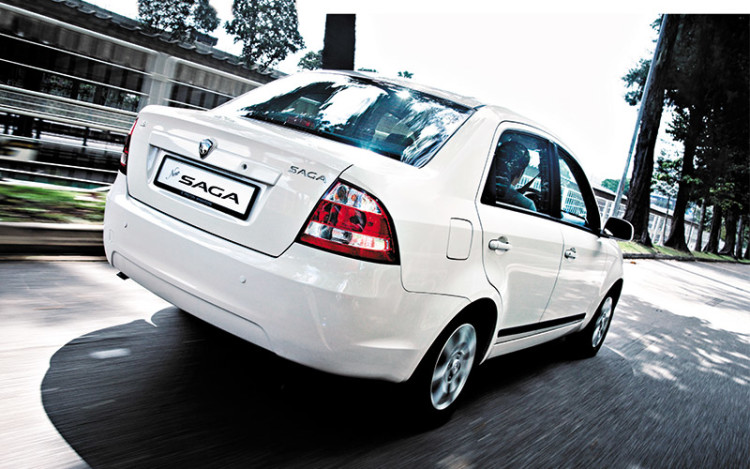 The engine sounds tinny and it’s not exactly bursting with energy, but it’s sweeter than the Proton unit which seems to run under protest. Even the occasional excursion to the far side of the tachometer is taken in the Kia’s stride. Do the same thing in the Saga and you get serious vibration hinting at a possible explosion.

As for ride and handling, surely the Saga can play its “Proton owns Lotus” card and beat the Rio? Not quite, at least in the course of this story. The Saga’s suspension is supple and more gentle over uneven tarmac than the firmer-riding Rio, but the Korean car suffers less road and wind noise and is also more settled over undulations.

Both cars change direction neatly, but the Saga’s brakes are noticeably less responsive than the Rio’s. The centre pedal also feels wooden in the Proton. ABS is specified for the Rio but not the Saga, which doesn’t even offer the feature as a factory option.

You don’t need Sherlock Holmes to tell you that the Saga is hopelessly outclassed by the Rio, except in outright pricing. It sells well in its home market and is competitive there, but here in Singapore where drivers are spoilt for choice and generally more demanding, even in the penny-pinching sub-$50k segment, the honest and highly affordable Proton saloon is nothing special. Neither is the 2010 Rio, but the Kia is undoubtedly the better buy. 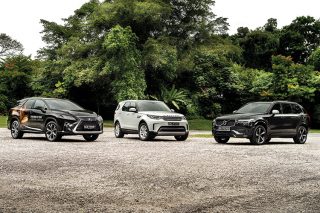 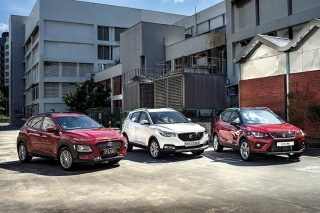 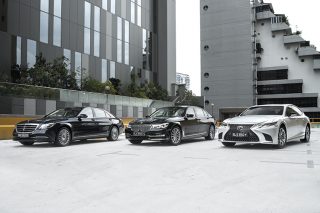 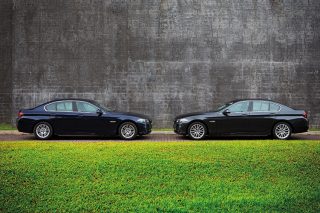 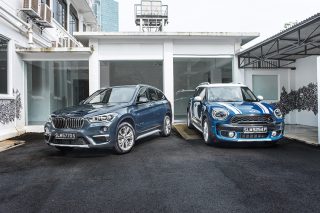