Walking up to these two swanky convertibles is very much like approaching two beautiful athletes clad in bikinis – it is an exhilarating and nerve-racking experience. Your heart will be racing as you make eye contact, while your palms are sweaty and your throat feels like cotton. Even saying “Hello” at this point could backfire, badly.

Fortunately, both 911s, the Carrera 4S Cabriolet (which we shall refer to as C4S Cabrio) and the Targa 4, cannot speak. If they could, they may just laugh the moment you open your mouth – unless of course, you happen to be as good-looking as they are.

The C4S Cabrio in this story is the sleeker of the two 911s. With its soft-top deployed, the shape is similar to that of the fixed-roof 911 coupe. But when its roof is open, the car looks more “daring” than its Targa sibling, for its cabin is more exposed.

Now, while the Targa isn’t as open to the elements, it exudes greater design elegance, because it retains a B-pillar “hoop” and features a large, wraparound rear windscreen. Only the cockpit is laid bare when the soft-top is retracted – the rear seats always remain covered.

Both cockpits are identical, with the familiar five-gauge instrument cluster and rising centre console, which places the gearshift lever closer to the driver. The two cockpits only differ in their graphical display (the vehicle silhouette shown is specific to each model) and rocker switch that operates the roof. These are minor differences, but they’re delightful, especially for the Porsche anorak.

The biggest difference between the C4S Cabrio and Targa 4 is how they drop/deploy their powered roofs. The Cabrio does it more quickly, taking 13 seconds compared to the Targa’s 20 seconds. And the Cabrio can perform its roof operation while being driven at up to 50km/h, whereas the Targa can only do it while stationary.

But the Targa “undresses” in a more seductive manner. Its rear deck with wraparound windscreen opens up and leans backwards for the fabric roof to be raised/lowered. It’s mechanical drama at its German best.

In human terms, the Cabrio is like a girl who removes her bikini top by simply pulling on a string, whereas Miss Targa unties her hair first, before tossing it to one side and undoing the clasp. Both gals/cars will leave you wide-eyed, but the Targa is more likely to keep you mesmerised.

Most convertibles are better at cruising than bruising, but these two Porsches have been engineered to be adept at both. Despite its “chopped” configuration, the C4S Cabrio does not betray any scuttle shake. It remains tight and planted even when driven over undulating surfaces, such as speed strips.

With its 3.8-litre flat-6 motor producing 400bhp and 440Nm, the C4S can turn its calm cabin into one filled with 100km/h winds in 4.5 seconds. And because the cabin is totally exposed when the roof is retracted, the raspy and sonorous soundtrack of that flat-6 can be enjoyed in all its raspy glory.

Although the Targa 4 “only” has a 3.4-litre flat-6 that produces 350bhp and 390Nm, it’s no slouch. You can go from having a perfectly coiffed hairdo to one that’s tousled (and possibly ruined) by 100km/h draughts in 5 seconds flat. The Targa’s semi-open format, however, means that the engine and exhaust notes won’t titillate your eardrums like the C4S Cabrio does.

Surprisingly, it’s also more agile, despite weighing just five kilograms less than the Targa 4. The latter weighs 1560kg, but feels like it’s carrying 100kg more. Thanks to their all-wheel-drive systems, both Porsches offer plenty of grip when tackling corners, but it’s the C4S that is more rewarding on twisty roads.

Ultimately, which of these two topless Teutonic athletes will leave enthusiasts windswept and enthralled? That depends on whether you can still your racing heart and muster the courage to walk up to them and say “Hello”. 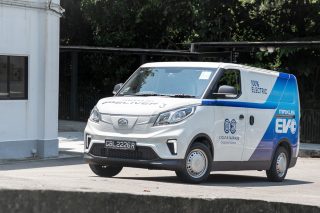