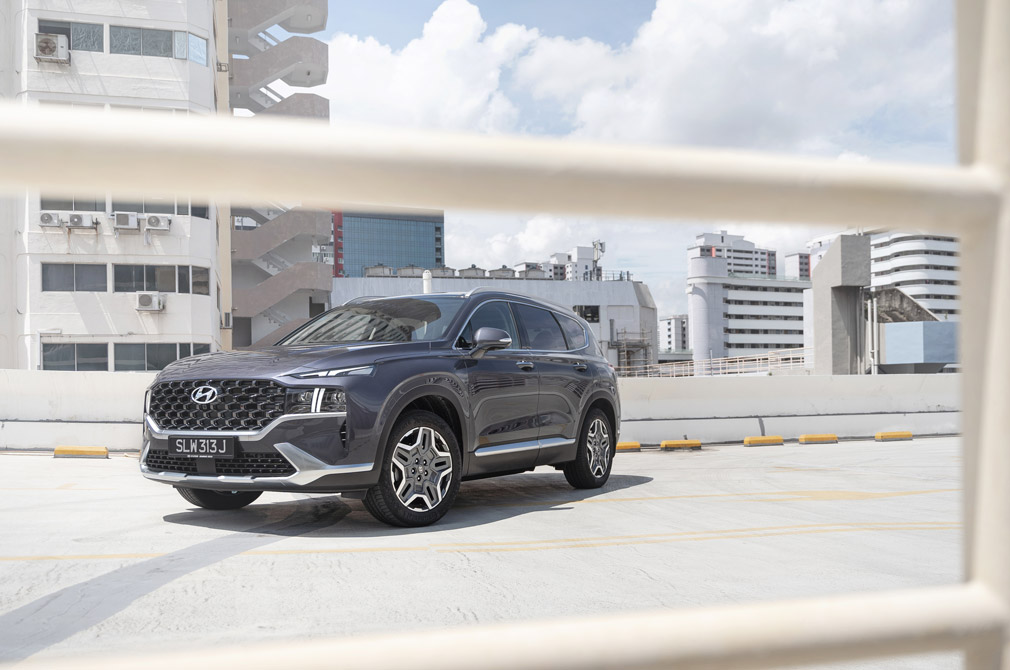 Most drivers – especially non-enthusiasts – want a car that looks good, is roomy, offers value for money, and attracts low road tax. In short, they want the biggest possible car with the smallest possible engine.

Hyundai may have just the car to meet to these requirements. It’s the Santa Fe Hybrid, a seven-seater SUV with a 1.6-litre engine. That sounds like the “correct” formula to woo local drivers.

NO MERE NIP AND TUCK

Since the current, fourth-generation Santa Fe has been with us for a few years now, a facelift was due.

The latest Santa Fe has a new front end with a wider, three-dimensional grille that now incorporates the headlights. T-shaped LEDs give the SUV an even more distinct face.

A shoulder line links the front and rear lights. The new tail-lamps are also “connected” by an LED strip meant to emphasise the Santa Fe’s width. 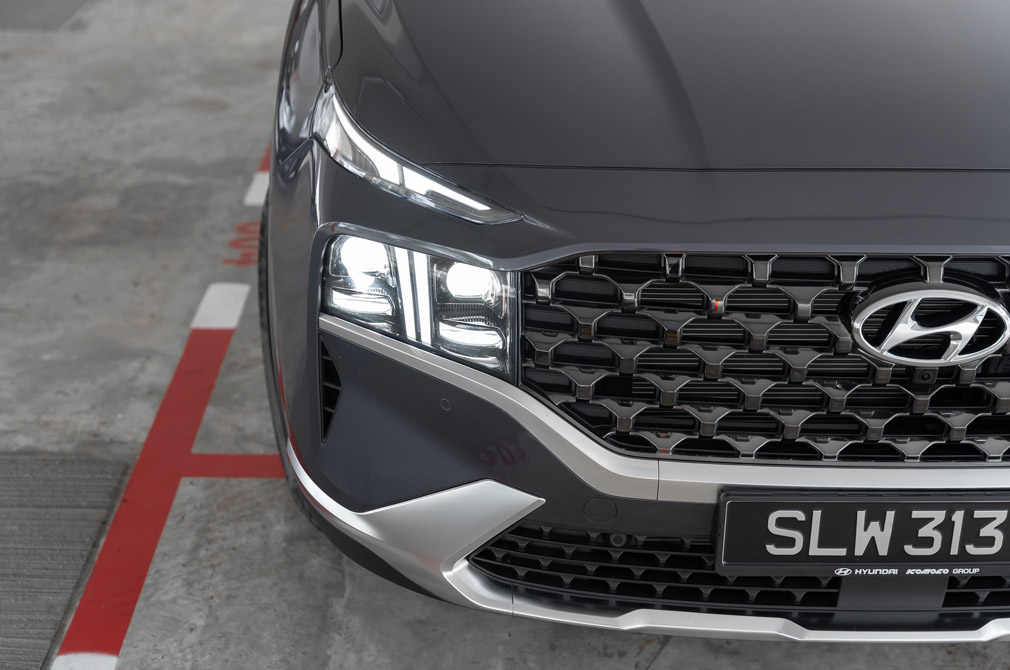 The changes aren’t all aesthetic. More significantly, the Santa Fe Hybrid rides on Hyundai’s new third-generation platform. Its improvements over the previous one include better safety, fuel efficiency and performance.

Get behind the wheel and you’ll notice that the substantial upgrades to the cockpit. These include a full digital instrument panel that replaces the previous part-analogue, part-digital unit, a head-up display function and a larger infotainment display.

The instrument cluster – also seen in the Avante – offers punchy graphics and displays footage from the Blind-spot View Monitor, which activates the camera feed from the side that you indicate towards. Another layer of visibility is always handy. 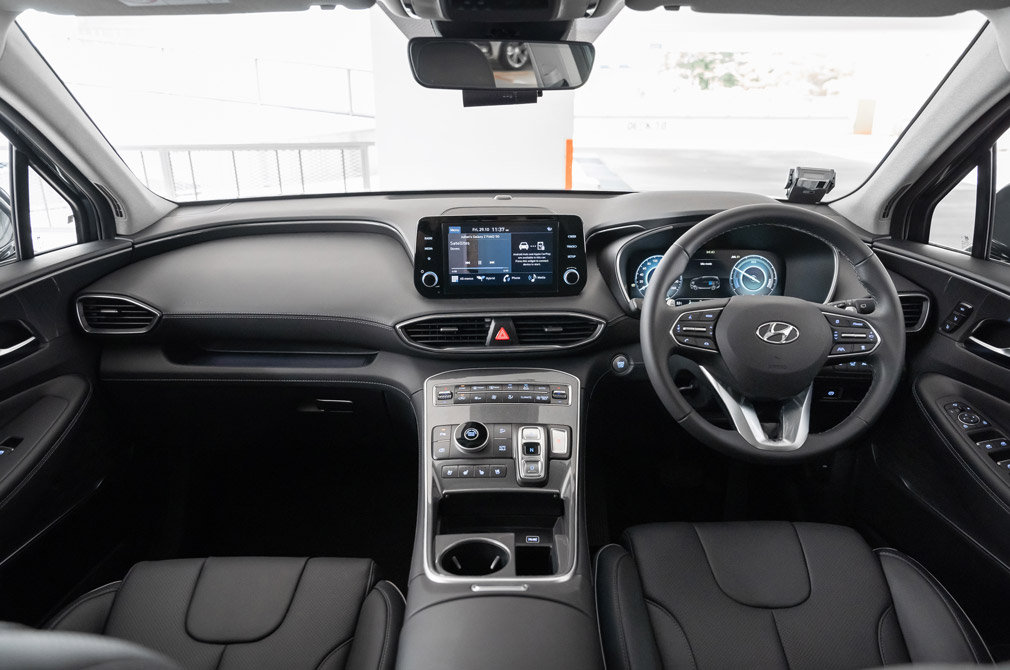 What may not be so handy is that there are now more buttons on the centre console. Apart from the climate controls, the gearshift lever has been replaced by individual PRND buttons.

It’s a space saving-move, but having to see which button to press instead of moving a gear lever isn’t immediately intuitive – at least not for seasoned drivers used to more conventional setups.

Speaking of space, third-row accommodations are probably best suited to occupants up to 1.6m tall. Anyone taller may find themselves having a conversation with their knees, as the low squab height tends to push your knees higher and thus closer to your face.

Beneath the Santa Fe Hybrid’s sizable bonnet is a turbocharged 1.6-litre inline-4 that’s paired to an electric motor. The two produce a combined 227hp (169kW) and 265Nm, which are sent to the front wheels via a 6-speed automatic gearbox.

Having a 1.6-litre engine powering something this large might seem impractical or even questionable, but don’t knock it till you’ve driven it. With a turbocharger and electric motor, the Santa Fe Hybrid feels both surprisingly refined and capable. 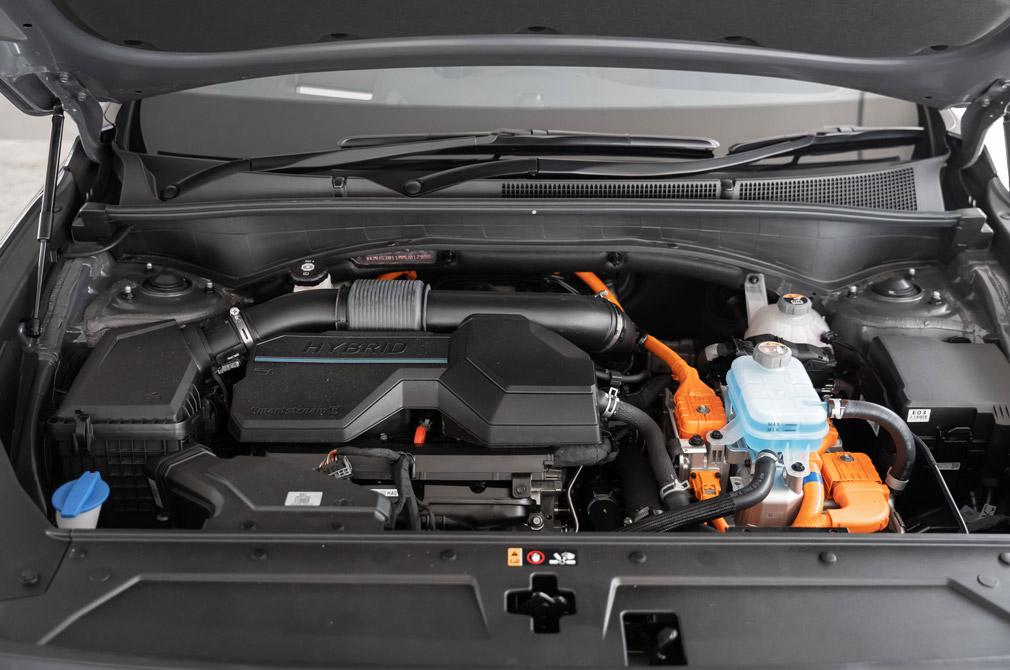 In fact, if nobody told you what was under the bonnet, you might assume that a turbocharged 2-litre resided there. There is some inertia to overcome when moving off, but the Santa Fe picks up speed progressively and gets to 100km/h in 8.9 seconds.

Hyundai claims an average of 18.2km/L, but I only managed 14.5km/L over three days. That’s actually decent for a hulking seven-seater SUV, at least in my book.

More than decent, on the other hand, is the Santa Fe’s ride quality and handling. The new and stiffer platform results in less leaning around corners and reduced “bobbing” over pockmarked surfaces and annoying speed bumps. 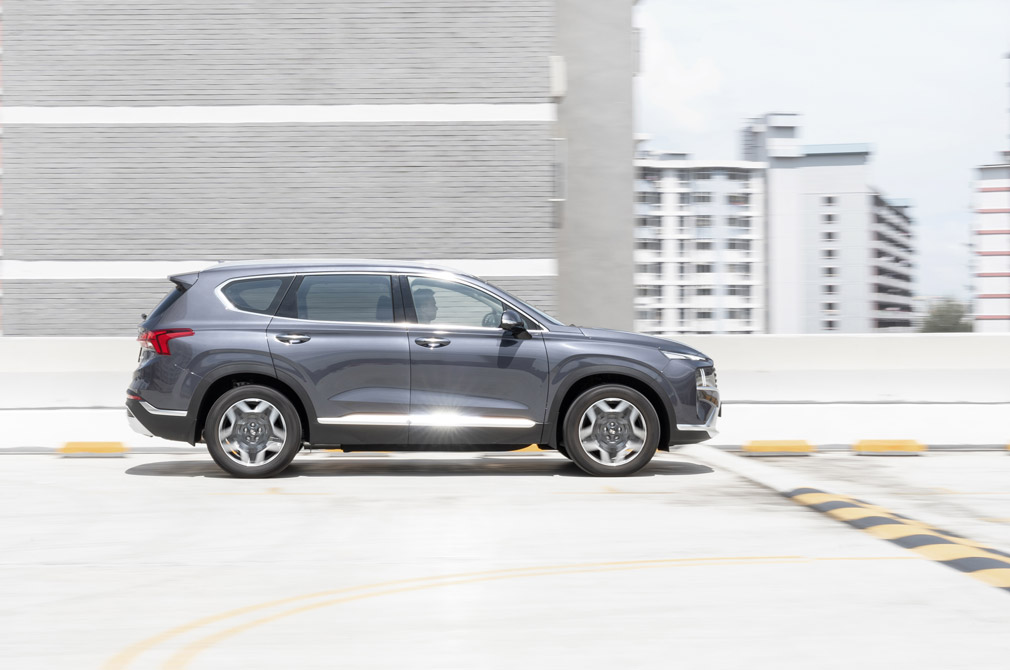 Hyundai says this is because the fixed points for the steering arms are now closer to the centre of the front wheels. This SUV also seems to “shrink” on the go, which increases driver confidence.

It would be even better if Hyundai equipped this model with rear-wheel-steering (or at least made it an option) in the future. That would really make the Santa Fe feel smaller than it is.

The upgrades to the Santa Fe have made it even more attractive than before. Its redesigned exterior, new platform, enhanced interior and slew of safety features, surely give family men and women plenty to think about.

Then there’s the petrol-electric hybrid drivetrain. In gentler hands, it can probably come closer to its stated average. But even if it does not, this 1.6-litre powerplant is a refined unit, and the relatively affordable road tax is another plus.

The Santa Fe Hybrid has the right formula to woo buyers. So, the only stumbling block now is its price, which no thanks to the current Cat B and Cat E premiums, makes acquiring it a very tall order. 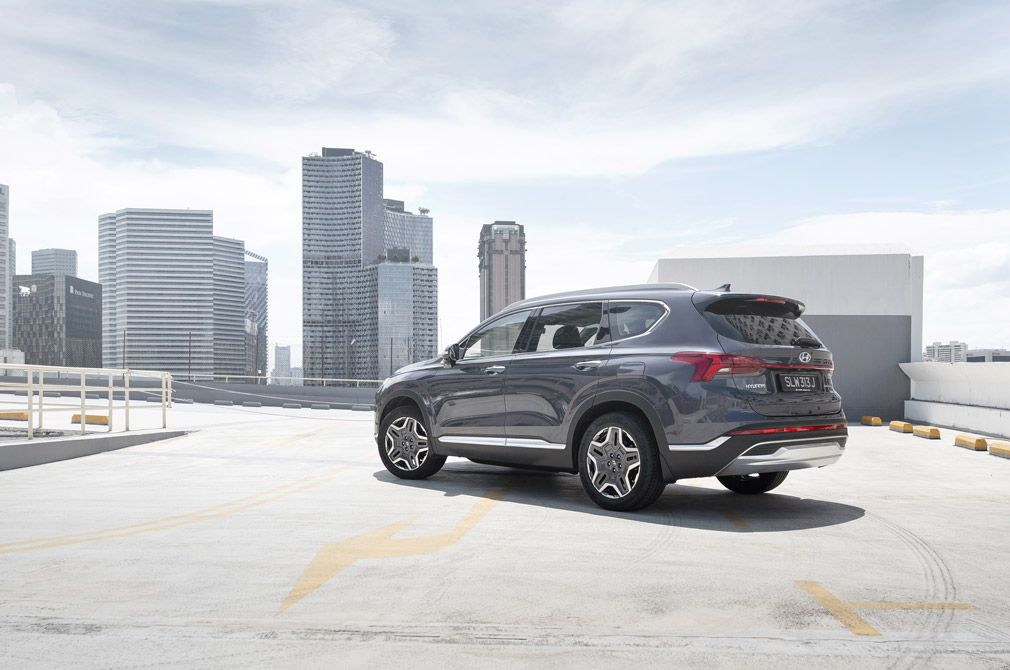 Looking for something larger? Check out our Hyundai Palisade review
Is it an SUV or MPV? Click here for our Kia Carnival review