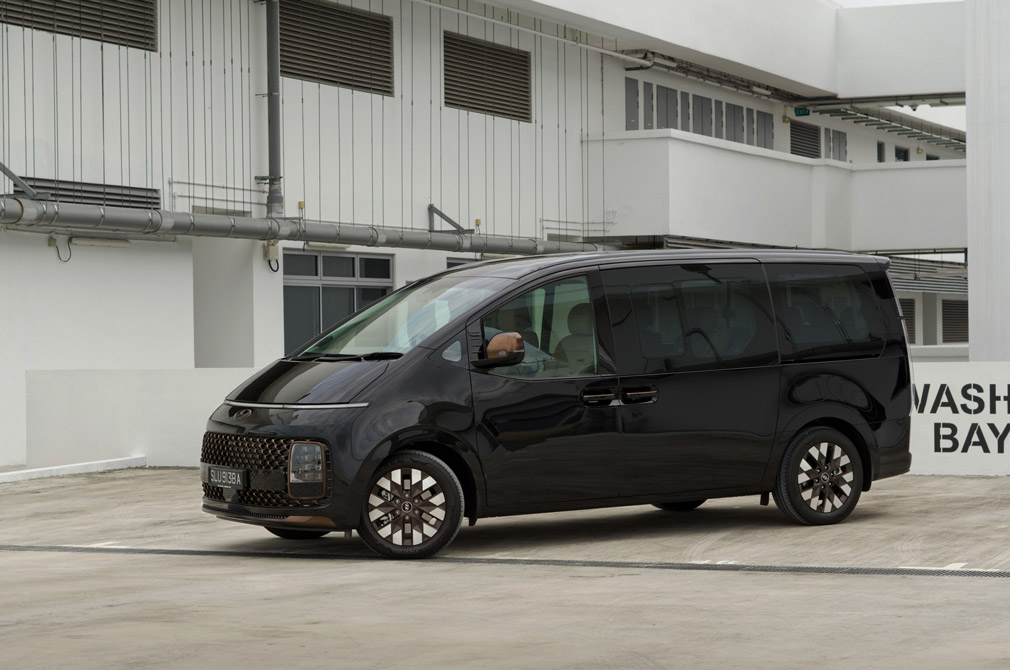 The exterior may be the first thing that we see when we set eyes on a car, but it is the interior where we spend most, or in fact, all of our time during a commute.

It makes perfect sense to design a car from the inside out. This was exactly what Hyundai did with the new Staria, which was designed around the occupants and their in-car experience.

ROOM THAT LEAVES YOU OVER THE MOON

Stepping into the cabin, you can’t not be impressed by the staggering amount of space that can rival a mini bus. It is hard not to let your imagination run wild as to what you could do with all that room.

Nothing salacious here – I am just picturing an office, a lounge, tea room, maybe even a spa.

The two captain’s chairs in the second row are not called Premium Relaxation Seats for nothing. They recline almost flat out and come with ottomans that allow you to put your feet up. 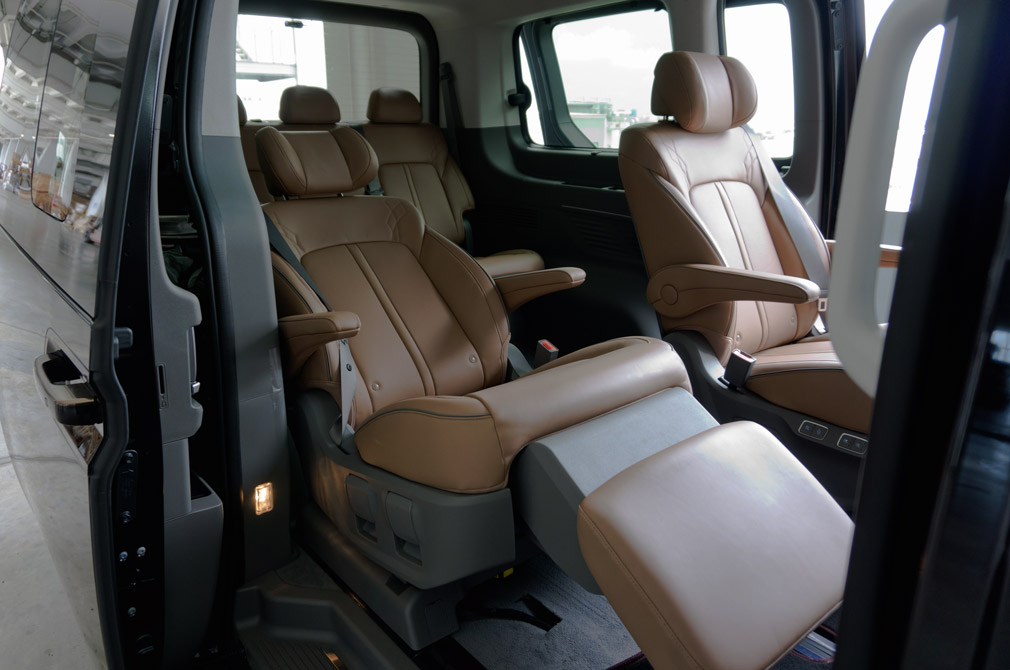 The controls are electronic, along with a one-touch mode that enables the seats to recline automatically to an optimum, preset position.

The seats slide forward and back via a manual lever by the side. Even with the second-row seats fully reclined and moved as far back as they will go, there is still ample leg and knee room in the third row. That’s just how capacious the Staria’s cabin is.

Up front, the glove compartment has been pushed slightly forward from the rest of the dashboard to offer the front passenger some extra legroom.

It is not just about the horizontal expanse of space, but the vertical, too. At a height of 1990mm, a child can move around the cabin in an upright posture.

The panoramic side windows, sunroofs and lowered beltlines reinforce the open and spacious quality inside the Staria. Inspired by traditional Korean hanok architecture, you get the feeling that you are connected with the external environment even though you are in the cabin.

The boundaries between inside and outside are blurred and the external environment becomes an extension of the cabin. 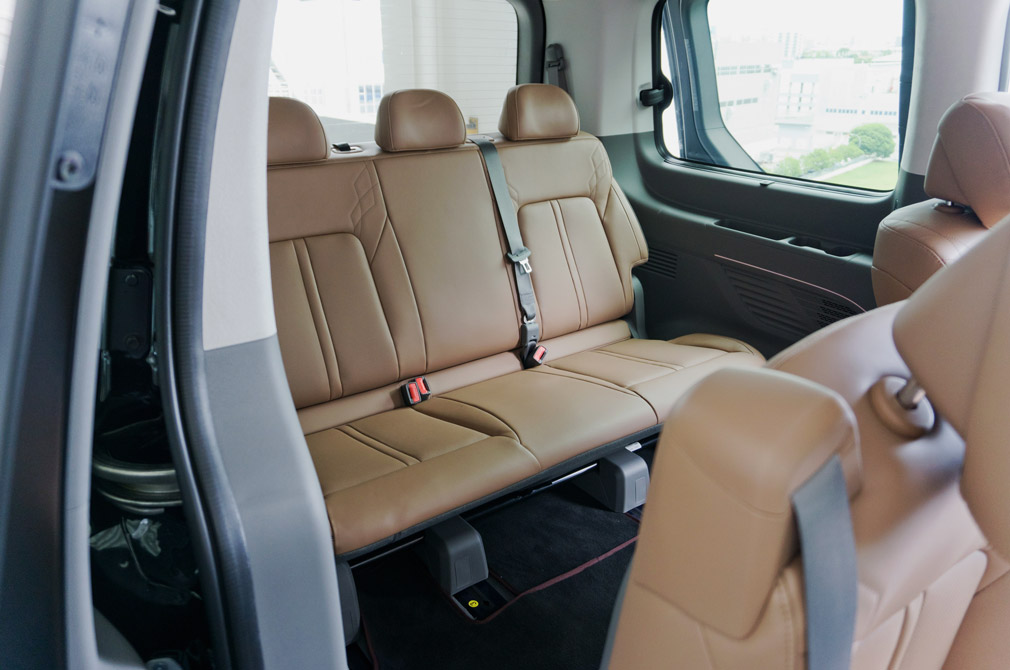 AS COMFORTABLE AS HOME

Apart from space, climate control in the front and second rows, four overhead vents above the second row and underfloor vents in the third row ensure that all seven occupants seated over three rows travel in absolute comfort.

The second-row windows slide open school bus-style while the ones in the third-row tilt open an inch or so. With such large windows, sunshades are a godsend on sunny days, even if they are manually operated.

The rear multi-link suspension ensures ride comfort. I like that I do not need to slow down excessively when going over humps. Good sound insulation cuts out external noises, so you get a quiet sanctuary to complement all that space and comfort.

The Staria comes equipped with a plethora of useful features beyond what is expected of a Multi-Purpose Vehicle (MPV). There is storage aplenty. On the inside of each of the two front door panels alone are four open compartments of varying depths, lengths and widths.

There are two concealed, tray-like storage spaces above the dash, and two cubby holes below the centre fascia and centre console. All these before we even get to the usual glove compartment and centre console storage.

Cup- and bottle-holders (I counted no fewer than eight), more storage pockets and even drawers can be found spread out across the cabin.

But the most valuable storage real estate for me lies in that gap between the centre fascia and centre console, directly above the transmission tunnel. 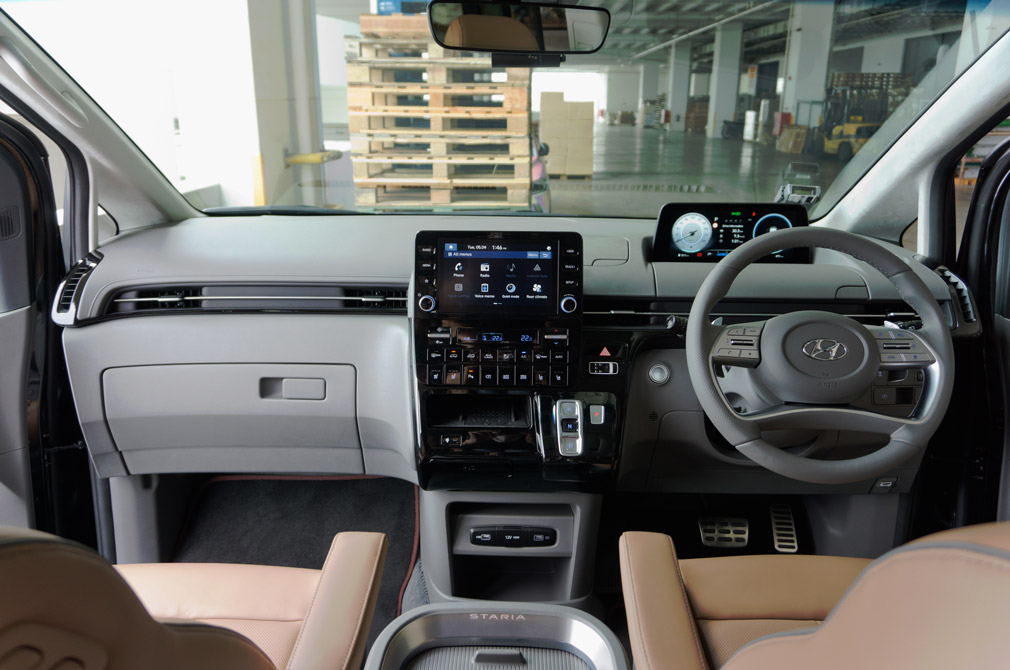 I have finally found the perfect spot for my handbag. It fits even the most commodious of bags, and I do not have to worry about my belongings taking a tumble during hard braking.

The eight-inch infotainment interface is nothing fancy, but sometimes, simple and user-friendly is all you need. A 10.25-inch instrument cluster presents key driving information clearly and legibly.

The two round speed and rpm dials become blind spot cameras when the turn signals are activated. It’s a handy feature even if the car enjoys good visibility all round, thanks to generously-sized openings and a lowered beltline. Instead of a gear stick, you get P, R, N and D buttons.

Ergonomically, the controls and air-conditioning vents on the dashboard can be a slight stretch from the driver’s seat and required me to lean forward slightly in order to reach them. 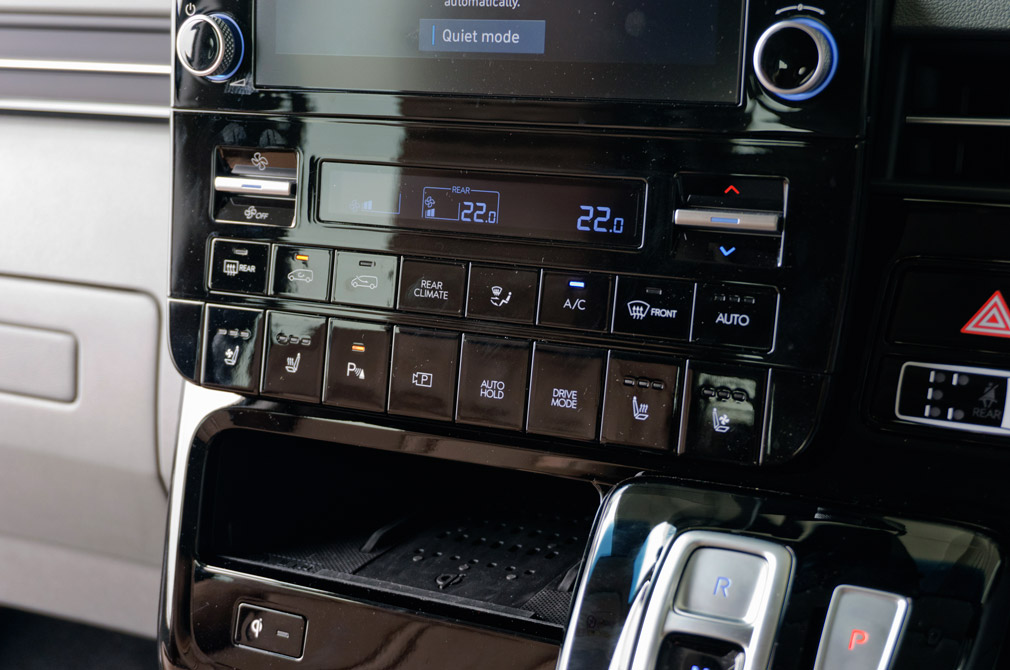 Tall sliding doors with a wide aperture make ingress and egress a breeze. Loading up groceries or cargo in the rear is an effortless process with a lowered rear bumper.

The Staria’s third-row seats can slide forward with the pull of a lever or flip down with the tug of a strap, which provides greater flexibility in terms of spatial configuration and cargo capacity.

One note of caution. The tailgate does extend quite a distance away from the car, so you do need to ensure there is sufficient clearance behind the vehicle.

A trade-off for all that headroom is that it makes many car parks inaccessible, which can be a tad inconvenient if you are self-driving. Not an issue if you have the privilege of being chauffeured around, which in my opinion, is the best way to enjoy the Staria.

That said, despite its somewhat van-like proportions, the Staria makes for a fairly decent drive. Once you get over its gargantuan size, it is actually not such a handful behind the wheel. I did not face any difficulty keeping within the lane markings on the road.

For such a behemoth, the 331Nm of torque gets it chugging along from stationary without too much strain. The 272hp churned out by the 3.5-litre, V6 engine is just about adequate under normal driving conditions. By that, I mean cruising leisurely and some accelerating to overtake, but no aggressive throttling or defensive stunts. While some roll is to be expected- it is an MPV after all, it is not pronounced enough to feel like you are piloting a boat. The throaty note from the 6-pot is a welcome accompaniment to any vehicle, even an MPV.

Parking the whale of a car is also easier than expected with the assistance of a 360-degree camera and those expansive windows and rear windscreen. Its 1997 mm width (excluding wing mirrors) barely fits into a standard sized parking lot.

The rear sliding doors may not be a problem, but you will not be able to open the two front doors if there are cars parked either side. So, either hunt for a more spacious parking lot, or hire a chauffeur.

The Staria is a bold design move by Hyundai. Clad in a futuristic package that would look right at home on the set of a Sci-fi movie, its spaceship-inspired exterior design complements the cruise ship-like interior.

The most striking feature is the row of daytime running lights that stretch across the front. Below that is an oversized radiator grille with a unique mesh pattern flanked by vertically-oriented headlamps.

On the side profile, the flushed windows reinforce its clean form and streamlined silhouette. The Staria’s rear is still on the boxy side, but the two columns of taillights with a pixelated design inject some visual interest. 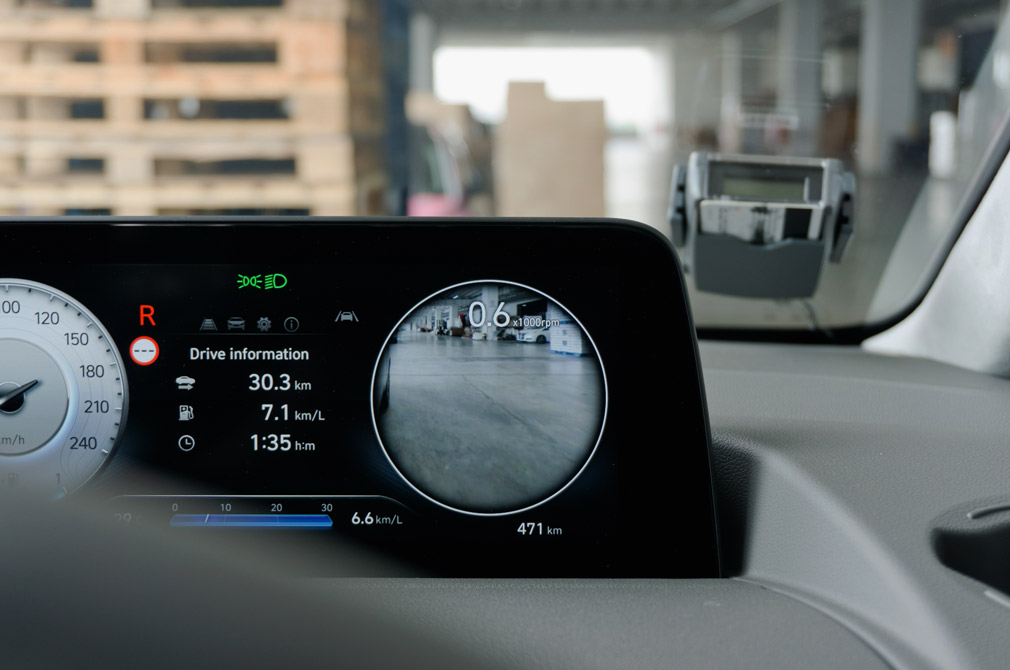 The Staria’s proposition focuses on the journey. It is designed around optimising the time spent in transit, be it for relaxation or for engaging in a productive task.

It can be conceived as the third space, a sort of lounge-on-wheels that is an extension of the home and work environments. It is the space that we inhabit while on the move.

This is a concept that is closely associated with future mobility. It has gotten me all starry-eyed over a motoring utopia in the not-too-distant future where the space in transit is part of the experience and no longer just a means to an end destination.

The Staria is a step in that direction.