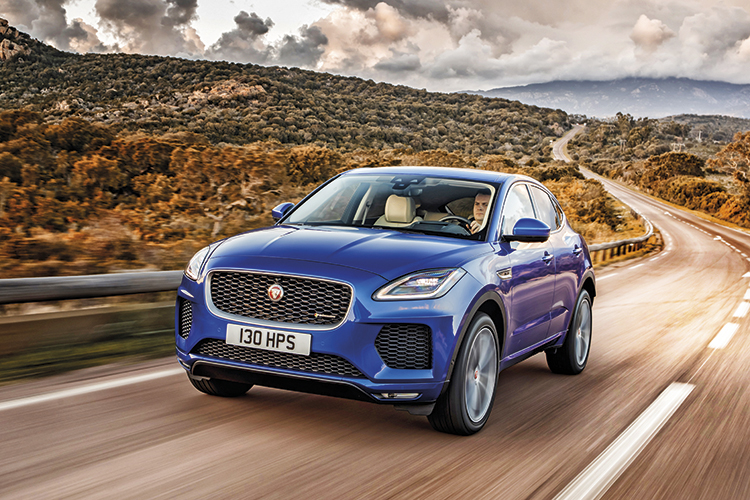 The shape of the Jaguar E-Pace is inspired by the Jaguar F-Type Coupe.

Guts. Yup. It takes lots of it for a carmaker to organise a media drive for an SUV at a location where one of the most iconic tarmac rallies is held annually.

The Tour de Corse, a round of the World Rally Championship, takes place in Corsica, an island blessed with gorgeous beaches and some of the best driving roads in the word.

Jaguar did just that with its second SUV, the E-Pace, and it had every reason to do so. From the onset, the British brand designed the compact SUV to be sporty.

The shape of the small SUV is inspired by the F-Type coupe, which is among the sexiest sports cars available today. 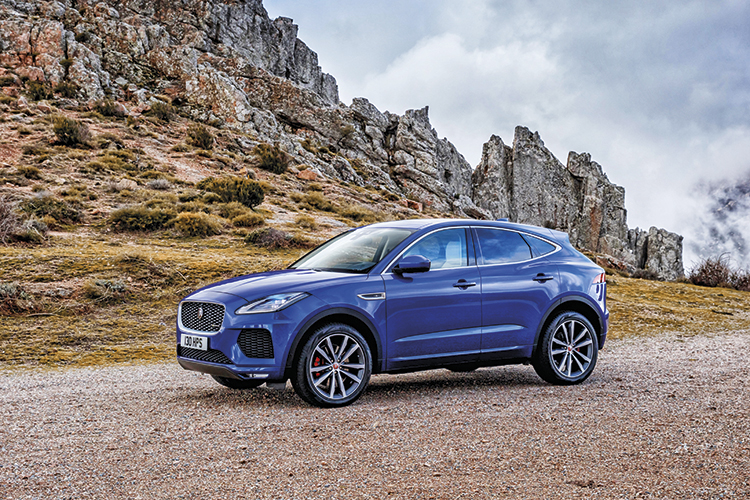 The E-Pace follows suit with its longish bonnet (which ends at the brand’s signature oblong grille and slim headlights), sleek windows, high shoulder line, bulging wheel arches and dual exhaust tailpipes (one on each end of the rear bumper).

When viewed from the side, it’s easy to see the “F-Type-ishness” in the E-Pace, especially the top half of the car. The two-door’s styling cues are all there. Overall, the silhouette of the new SUV is arguably the sportiest in the segment right now and Jaguar has hit a home run in this department.

The impression of being in a sports car is further enhanced by the highish window sill and smallish rear windscreen. The latter is a definite disadvantage while reversing the vehicle, but the rear camera helps to mitigate this. 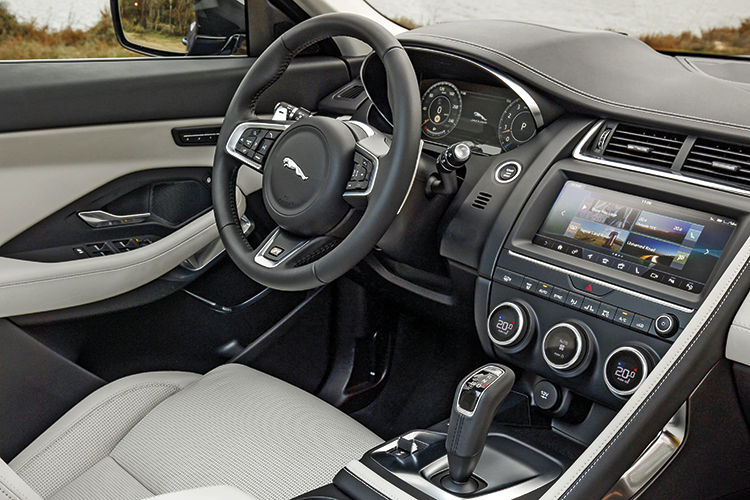 The rear seats are just as supportive as the ones in the front, but the occupants back there don’t have it quite as good in terms of space – legroom is at a premium if you are relatively tall or have long limbs. Still, it will accommodate two adults; three if you don’t mind the total loss of personal space. At least the headroom is adequate.

Onboard storage options include a clever configurable cubby box between the front seats. This voluminous space can “swallow” two 1-litre bottles or an iPad plus an iPhone, in separate holders if needed.

There are eight models of E-Pace available – six with diesel engines and two with petrol engines. All of the engines (powered by Jaguar’s Ingenium technology) are of the 4-cylinder variety.

The E-Pace I tested was the more powerful petrol variant named R-Dynamic S P300 (the other being the P250). 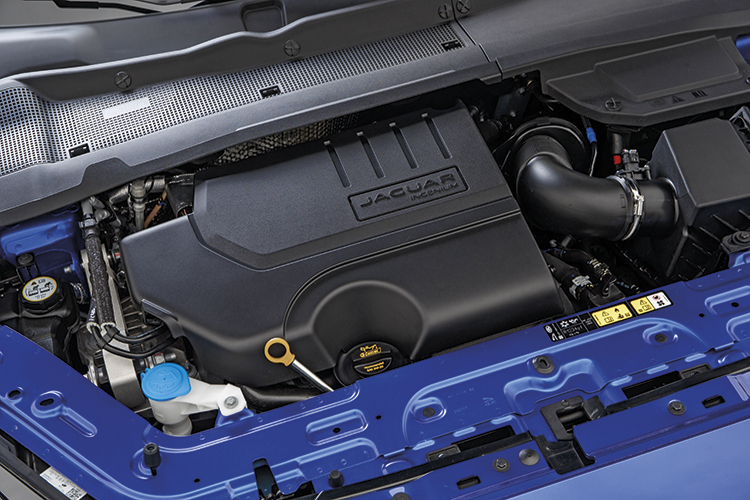 Compared to the standard model, R-Dynamic S adds exterior bits such as the gloss black finish for the grille, chrome trim, LED headlights with daytime running lights, and power side mirrors with auto fold and heating, as well as interior goodies such as aluminium paddle shifters, 10-inch touchscreen with navigation and various connectivity functions (4G Wi-Fi hotspot for eight devices, five USB ports and three 12V points), and reverse camera with sensors.

Optional features found in the test car are the Meridian premium audio system and the head-up display.

“Sporty” is the word I would use to describe the way the E-Pace drives and handles. Equipped with a MacPherson-strut (front) and multi-link (rear) suspension setup, the all-wheel-drive SUV acquitted itself well over the 160 kilometres of asphalt. 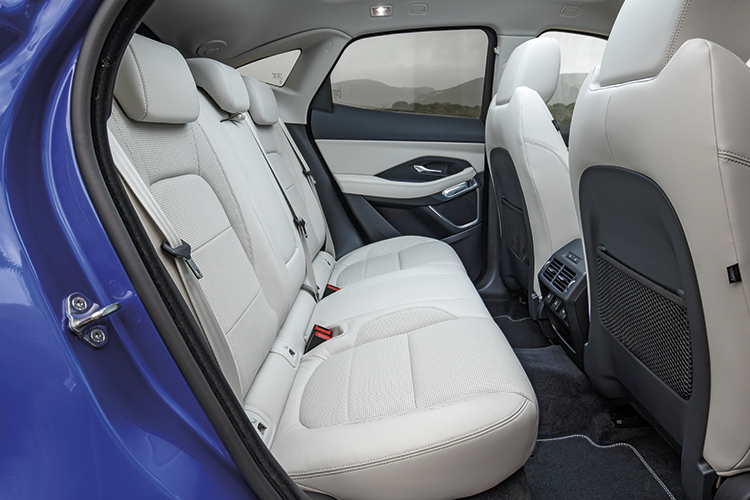 Grip was in abundance, thanks in part to the optional 20-inch tyres, and the car felt balanced most of the time. Only in really tight turns did it feel slightly ponderous. This was not helped by the car’s weight – over 1.8 tonnes, or 1819kg to be exact.

That it weighs this much is surprising, because aluminium is used in the making of the bonnet, roof and tailgate.

If the E-Pace carried too much speed into a corner, understeer was the first thing experienced, but the intelligent Active Driveline system (which allows up to 100 percent of rear-axle drive torque to be distributed to either rear wheel depending on available grip) worked well to keep trouble at bay. 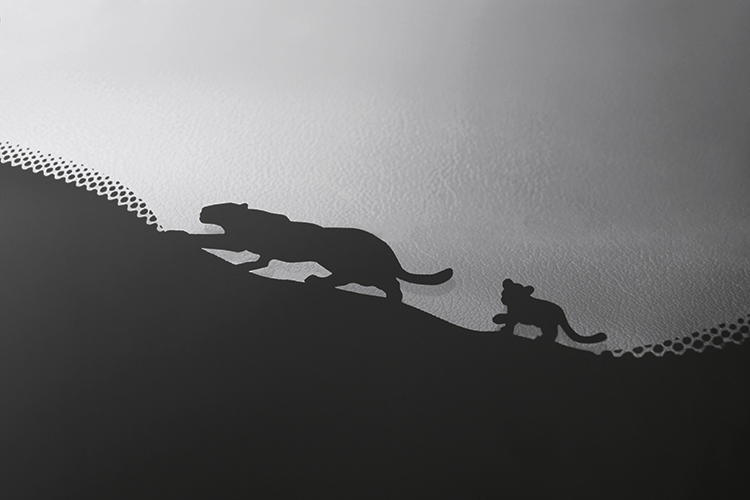 The Jaguar E-Pace’s windscreen has a cheeky motif of a cub playfully following an adult jaguar.

The system was also put to effective use on an 8km off-road jaunt through some hilly terrain, which was part of a private estate for the rich and famous.

The E-Pace performed capably in the testing conditions. Every inch of the ground was covered in a mixture of rocks, stones, sand and gravel, with a myriad different-sized crevasses and ruts thrown in for good measure.

Despite being shod with tyres made more for on-road than off-road driving, the Jaguar tackled the course with aplomb. 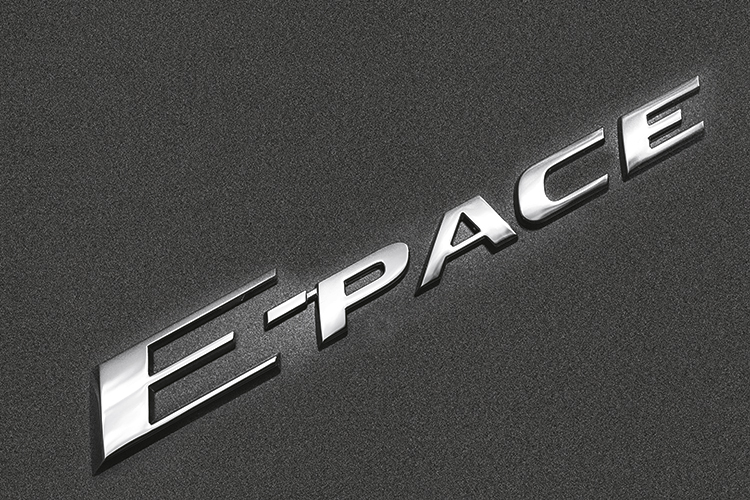 Towards the end, there was even a river to cross and the E-Pace did so with ease, no doubt helped by its ability to wade through depths of up to 500mm.

The car’s ride comfort was good, although a tad firm, and the sound insulation was excellent. The latter helped, too, when it came to keeping the engine’s unimpressive soundtrack out of the cabin.

Thankfully, while the engine note was nothing to shout about, the E-Pace P300’s acceleration was great. 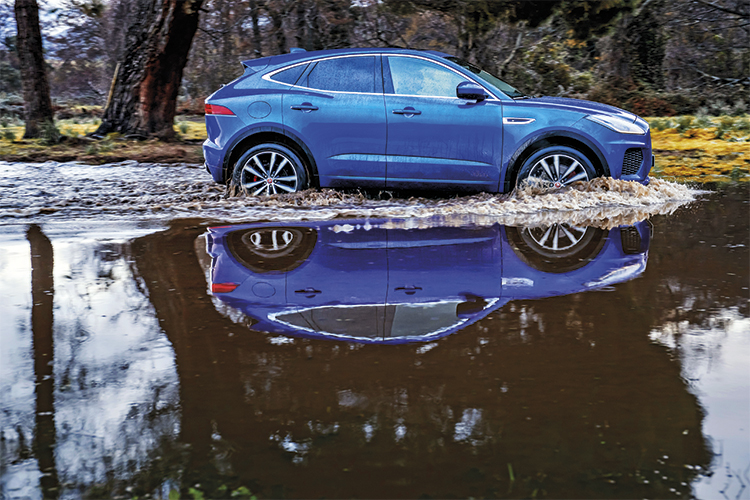 With 300hp and 400Nm on tap from the turbocharged 2-litre 4-cylinder motor, the century dash would be done and dusted in just 6.4 seconds. Put pedal to the metal and the speedometer’s needle could sweep to 243km/h.

Gearchanges by the ZF-sourced 9-speed automatic gearbox were a little sluggish when the paddle shifters were used, but they were good enough to let me enjoy speedy progress as I traversed the Corsican roads. Leaving the transmission in “D” was my preference.

The steering was sufficiently communicative, while JaguarDrive Control, accessed via a vertical flickable switch near the gearlever, enabled me to select Normal, Eco, Dynamic or Winter mode, each subtly changing the steering and throttle mapping. In Dynamic (the sportiest mode), the E-Pace was at its best as it felt the most “connected”.

Interestingly, a member of the car’s design team stressed that the E-Pace made it to production because Jaguar’s senior management saw a sketch of the SUV and liked it so much that they gave their approval. 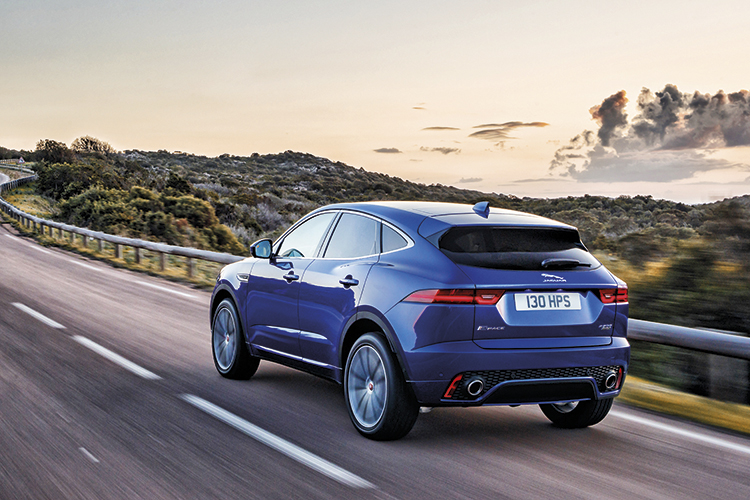 The Jaguar E-Pace has the necessary tools to compete with the Audi Q3, BMW X1/X2 and Volvo XC40.

While there is some truth to this, the real reason behind the existence of Jaguar’s “cub” (the nickname given to the newcomer by the design team) is to sell more Jags.

Sales of SUVs are still on the rise and the E-Pace gives the brand another model besides the F-Pace to compete in the market.

And the E-Pace does have the necessary tools to compete with the likes of the Audi Q3, BMW X1/X2, Mercedes-Benz GLA-Class and Volvo XC40, just to name a few. Even though the sporty cub is rather late to the race.

Check out the Jaguar E-Pace