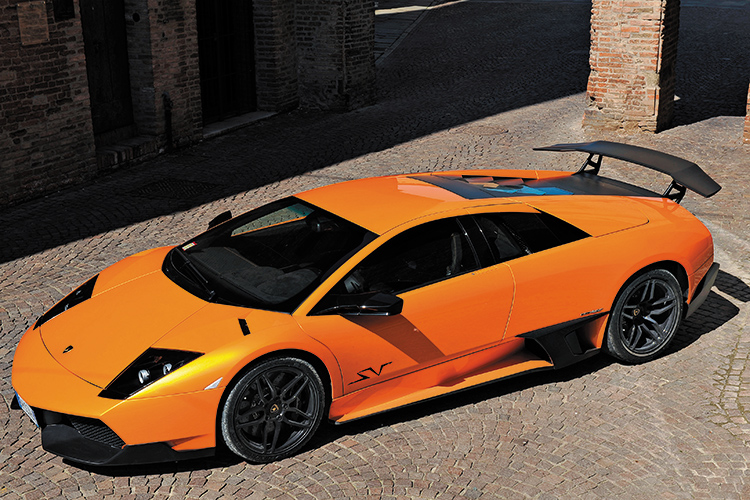 The Murcielago was the very first project that Audi worked on after it took Lamborghini under its wings.

Despite the Gallardo making the biggest impact on the marque’s sales volume, the original Murcielago and its descendants most accurately represent the Lamborghini image.

The latest Murcie derivative is the LP670-4 SuperVeloce or Murcielago SV, which Lamborghini promises won’t be their last “special”.

It doesn’t take a rocket scientist to figure out that 670 refers to the number of ponies on board, but what exactly is a “SuperVeloce”? 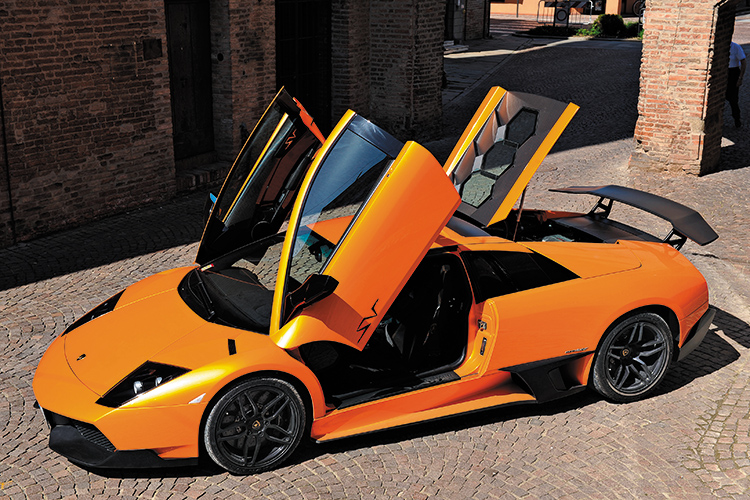 These are what they call “Lambo doors”.

It’s a name that hasn’t been used for a while and I’m not sure what it really means. My best guess would be that “SuperVeloce” is conceptually similar to “Superleggera”, which refers to the lighter and brawnier development of the Gallardo.

As with the Gallardo Superleggera, Lamborghini engineers’ weight reduction target for the Murcielago SV was 100kg.

They first focused on the steel space-frame, reducing its weight by 20kg through the use of high tensile-strength steel, which had the positive side effect of bumping up chassis rigidity by 12 percent.

Carbon fibre-reinforced composites helped cut weight from the front and rear fenders, as well as the housing for the third brake light (the latter does nothing for rigidity, of course). 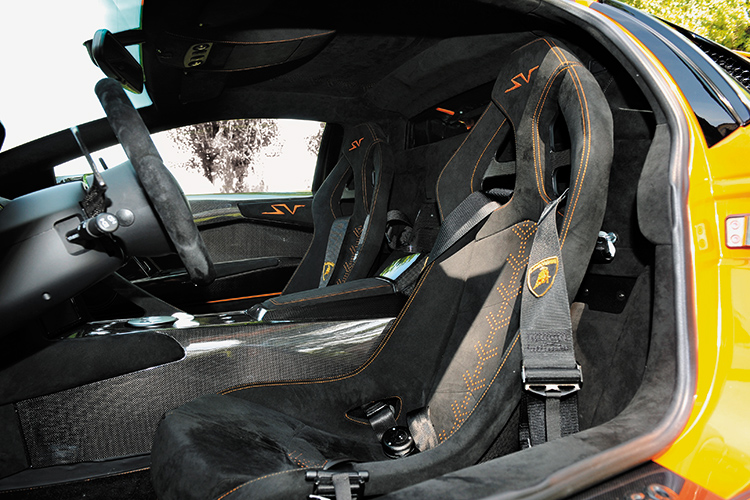 Lamborghini Murcielago SV cockpit is as loud as its exterior.

The optional rear wing and the rear diffuser construct also reduce the Murcielago SV’s weight, but most of the 13kg reduction back there is due to the removal of the automated lifting mechanism for the standard rear spoiler.

It’s questionable how much weight is really saved by having that huge boomerang Aeropack wing, which actually slows down the car, clipping terminal velocity to “just” 337km/h.

With the smaller standard wing, the Murcielago SV hits 342km/h in top whack. Increased downforce aside, that soaring spoiler is a must-have item just for its sheer visual impact. 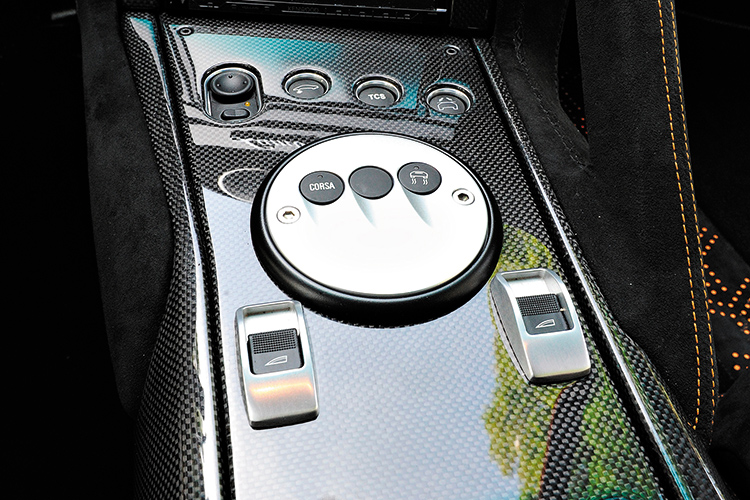 The weight savings continue inside the cockpit. About 34kg was “found and lost” through the extensive use of Alcantara and carbon fibre panels spread on every visible interior surface.

The bespoke Sport bucket seats come with a lightweight carbon frame that also assists the slimming exercise. You can opt for the standard, more luxurious seats (at no added cost), but these are much heavier than the Sport items.

You can also ask for a 6-speed manual gearbox, but the latest revisions to the esoteric E-gear automated manual system have made it better, with an improved clutch take-up, and is smoother to use around town. 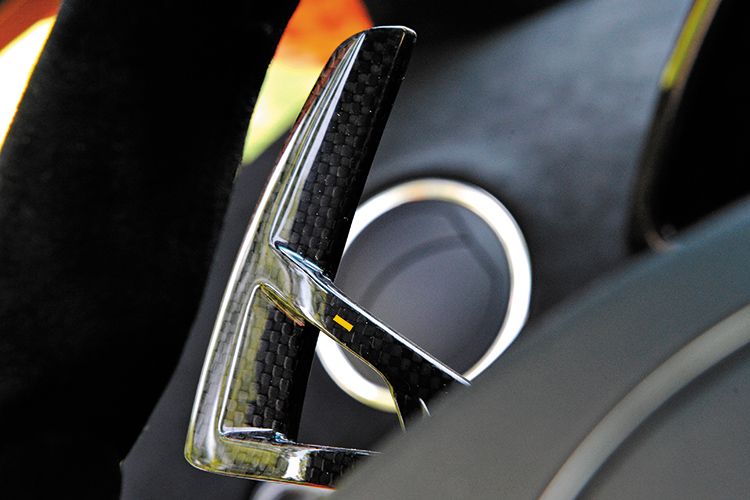 Automated manual transmission has finally been perfected in the Murcielago SV.

The last 33kg of the 100kg weight loss come from the engine and driveline. No, they didn’t turn the 4WD Murcielago into a rear-wheel drive machine.

Instead, they saved a significant 26kg from the exhaust plumbing alone by using a new lightweight alloy instead of stainless steel, with another 7kg saved by the clutch and flywheel assembly, together with the specially forged alloy rims.

Inside those 18-inchers are huge carbon ceramic brakes, which help reduce the SV’s unsprung weight. The LP640 specified these already, to provide the stopping power necessary to haul it down. 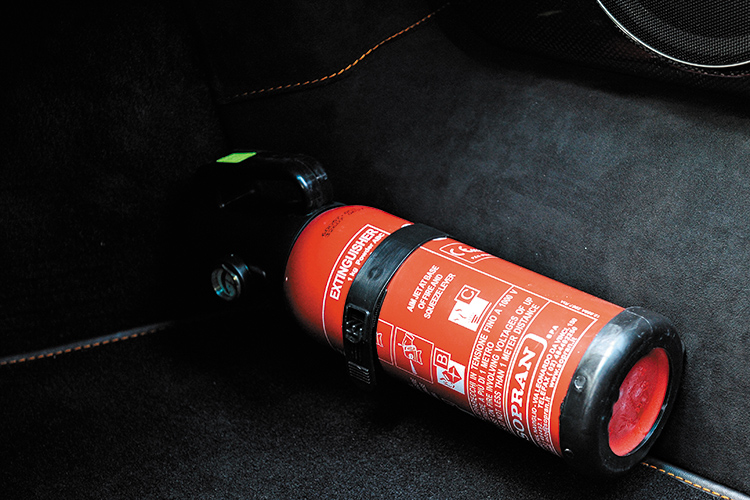 Let’s hope no one ever has to use this.

Oddly enough, they work in a far more progressive manner than the ones used by the Gallardo (as well as the genetically related Audi R8) and they feel even more effective in the Murcielago SV.

This is probably because of the car’s lower kerb weight, not any specific tweaking of the system.

So that’s the “less weight” part of the Murcielago SV performance equation. Now for the “more power” bit. Lamborghini squeezed another 30bhp out of the V12, which required the torque peak to be moved 500rpm higher. 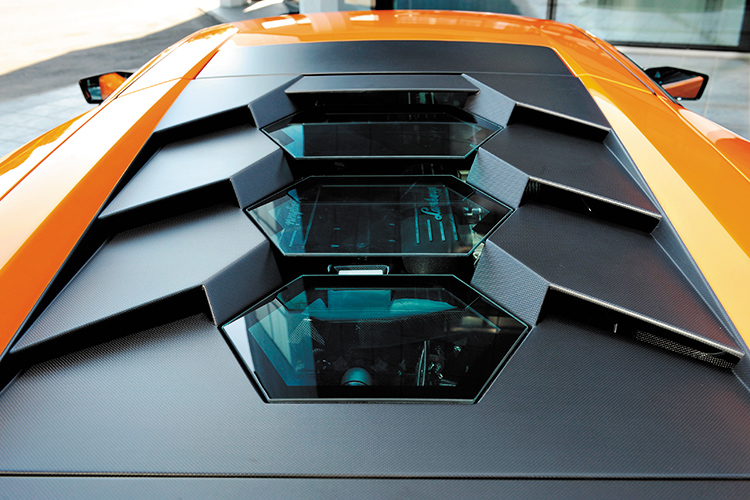 Lamborghini Murcielago SV’s venerable V12 has been tweaked to make even more power.

This extra oomph is likely to have been achieved through careful tuning rather than a straight reworking of the cam profiles. The mighty V12 sports a new working attitude, too, with a sharper exhaust bark urging you to play (or play with) the engine’s 8000rpm crescendo.

Better enjoy it while you can, because looming 2010 EU regulations would try to “muzzle” spectacularly noisy supercars like the Murcielago SV.

Sitting quietly, for now, on the tarmac is my Murcielago SV test car. With its dollop of war paint and various go-fast addenda, the SV looks really menacing. 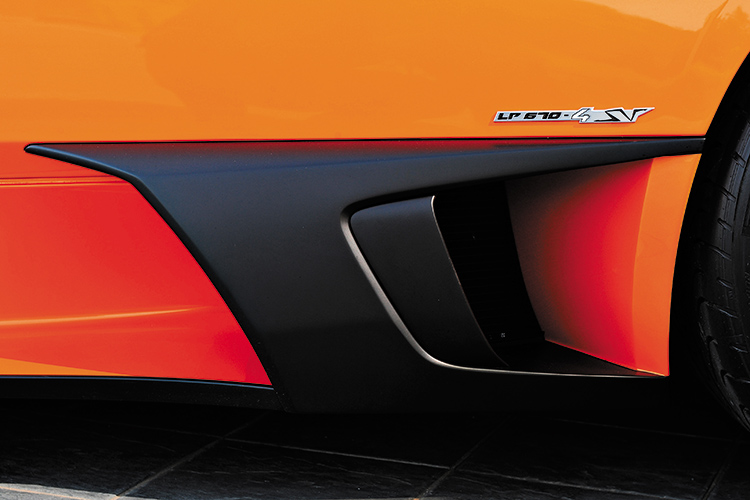 Its pronounced front splitter and rear Aeropack spoiler finished in wet carbon fibre contrast against the bright metallic orange paintwork of the body, crouched over jet black forged wheels with skinny spokes that do nothing to conceal the large matt ceramic brake rotors.

The Murcielago SV looks like it’s doing 300km/h just sitting there. (Yes, it looks that fast!)

Fire up the beast with a mere twist of the key; there’s no superfluous secondary button for ignition. The SV bellows to life and begins to promise an experience fully equal to what its appearance suggests.

There’s an odd thrum and wobble around 2000rpm, but the boisterous Lambo V12 has always been like that. 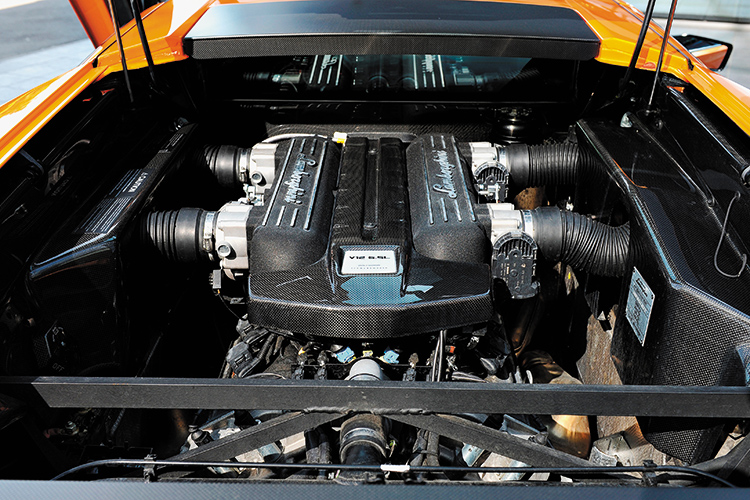 Tap the right shift paddle and the gearbox goes into first. (There is no auto mode to sell this supercar idea to your better half, by the way.)

The gear changes all seem a bit sweeter than before, and you no longer need to feather the throttle just before each shift point to smoothen it out. These are great leaps from the lurchy ways of the old E-gear.

Unleash the full fury of the Murcielago SV and it launches itself into the horizon with a ferocity that goes far beyond the added 30bhp and subtracted 100kg. 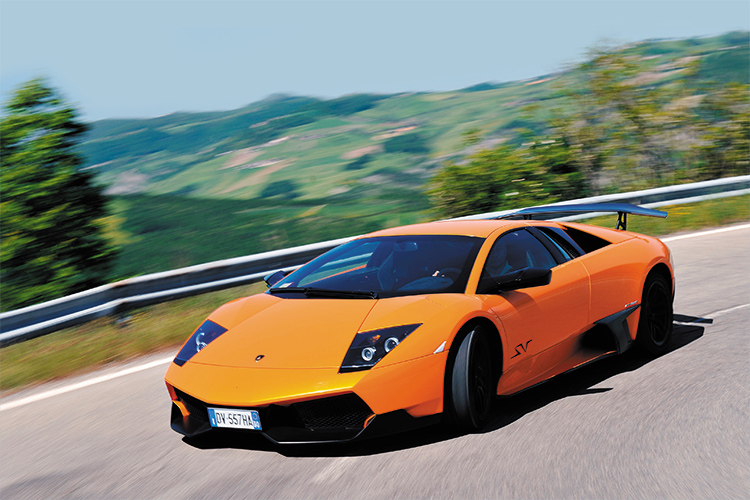 It’s potent at any speed, but what’s most engaging is the extra sparkle at the top end of the power band. While its 1565kg kerb weight still isn’t exactly light, it feels unbelievably lithe.

It’s downright livid, too, thanks to the explosive compound of big brakes, ultra-stiff suspension, gumball P Zero Corsa tyres and, of course, a frenzied stampede of 670 Italian horses.

Over daunting Italian mountain roads, the SV proves to be a brilliant union of traditional supercar art and high-tech automotive science. 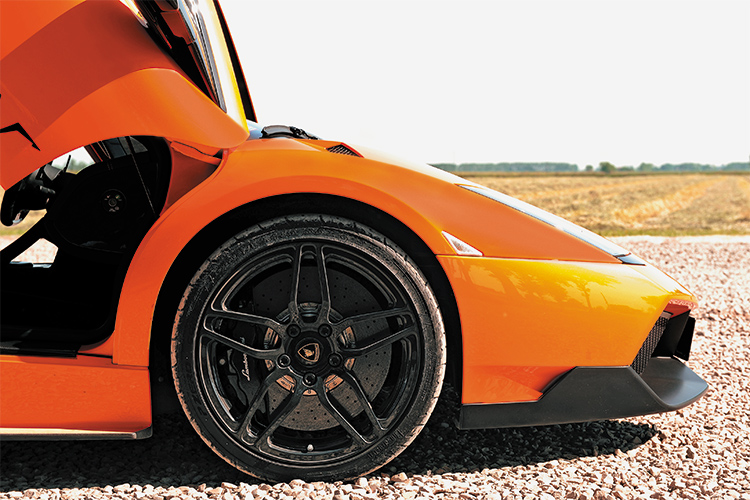 Lamborghini Murcielago SV’s XXL-size carbon-ceramic brakes are not only effective, but surprisingly full of feel.

It has a large footprint on the road, but the SV knows and conveys every nuance of that footprint to the keen driver, allowing him to feel the car through every corner rather than just steer it through.

Mechanical grip from the entry point to the apex is just fabulous, with the P Zero Corsas playing critical roles in this. 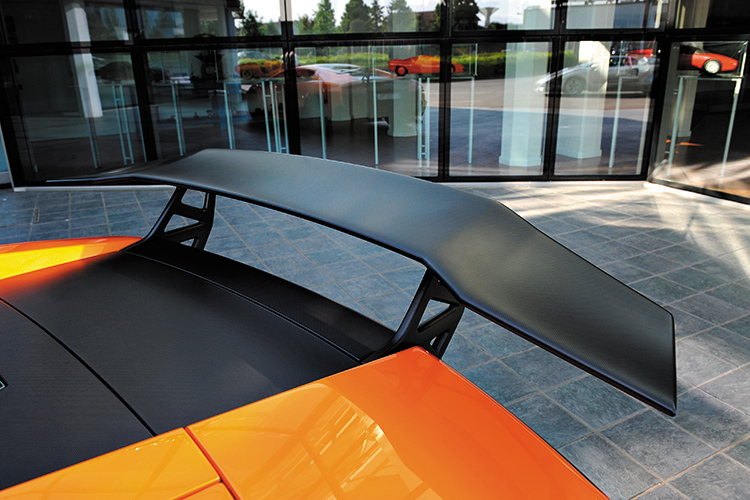 There is no stability programme – just good old traction control, making the SV feel even more like a pure driving machine. The excellent handling comes from a proper chassis set-up instead of some artificial electronic means.

Of course, this would show up ham-fisted driving. But if it’s driven right, the rewards are obvious. Another revelation over our mountainous test route is the strength of the SV chassis, which delivers a cushioned ride despite the firm suspension.

So, the Murcielago SV is a genuine bad-ass supercar that goes as “super” as it looks.

A limited production run of 350 units means you have to be fast with your chequebook if you want a piece of the action.

Believe it or not, this machine sure feels like the finest Lamborghini ever made.