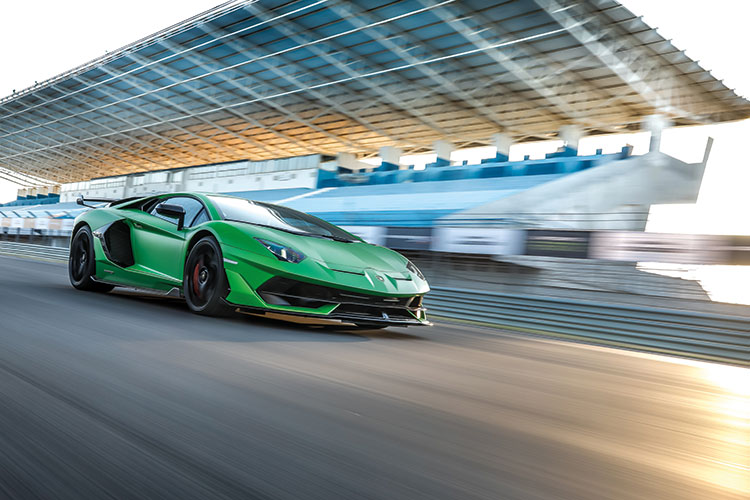 At the limit of adhesion, a slight lift of the throttle mid-corner brings the Aventador SVJ back in line.

The Nurburgring-Nordschleife. The legendary German circuit where all supercar makers head to with their prized models to try and set a lap record.

In July this year, the Lamborghini Aventador SVJ clocked a time of 6 minutes 44.9 seconds to wrest the record from the mighty Porsche 911 GT2 RS.

The Aventador SVJ (Superveloce Jota) gets its name from the 1970 Lamborghini Miura Jota.

Though that very first Miura Jota was developed from a standard Miura, a handful of Miura SV owners asked Lamborghini to perform that same conversion (which reduced weight by 400kg) on their cars and the “SVJ” moniker was born. “Bullfighters” will feel more like fighter pilots in the SVJ’s cockpit.

Also worthy of note – “Jota” is Spanish for the letter J, which alludes to the FIA’s Appendix J, the set of regulations governing road cars used for racing.

The Aventador SVJ features the ALA (Aerodinamica Lamborghini Attiva) system, first seen on the Huracan Performante. However, it has been enhanced and is now referred to as ALA 2.0.

It includes newly optimised air inlets and aero channels, and the system has been recalibrated to account for the car’s enhanced lateral accelerations.

ALA 2.0 actively alters aero load to attain low drag or high downforce, depending on dynamic conditions. Electronically actuated motors open or close active flaps in the front splitter and on the engine bonnet that steer the airflow, front and rear. 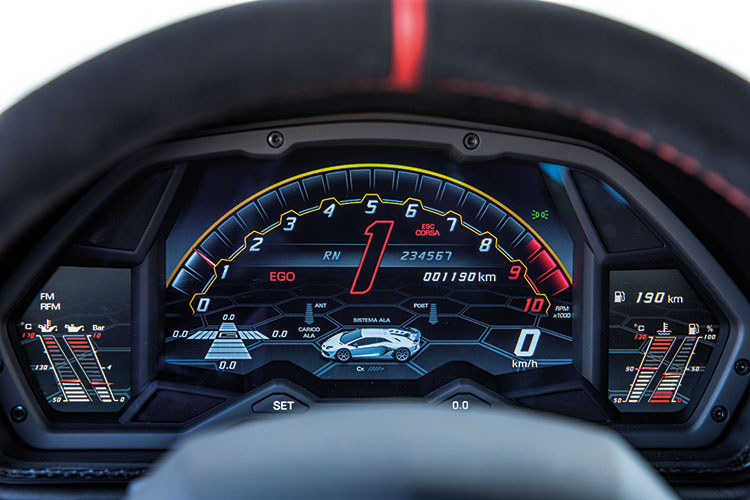 As a result, the Aventador SVJ is able to achieve a 40 percent increase in aerodynamic downforce when compared to the SV. At 300km/h, the downforce is an astonishing 350kg.

While some may liken ALA 2.0 to the Drag Reduction System on Formula 1 racecars, it has an additional party trick – it is able to reduce downforce over half of the rear wing (either left or right) only.

By doing so on the half that is furthest away from the apex of the corner, the greater downforce over the inner tyre counters its tendency to lift, thereby maintaining traction.

At 1525kg, the Aventador SVJ is similar in weight to the SV. However, the former’s 6.5-litre V12 pushes out an additional 70hp. To achieve this sort of power increase, the engineers changed the camshafts’ lift and duration. 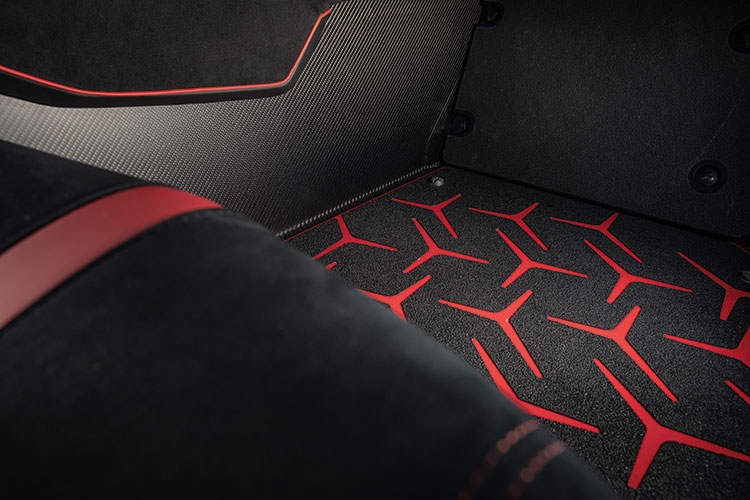 And to get the valves to open further and stay open longer, they are made of lightweight titanium rather than steel.

Internal friction, in particular between the cylinders and bores, has also been reduced to improve efficiency. Elsewhere, the lightened exhaust system has been tuned to reduce backpressure and it sounds glorious.

The ISR (Independent Shift Rail) automated manual gearbox has come in for a lot of criticism and while the unit in the SVJ has been tweaked, the characteristic “shift shock” is still evident. However, it does suit the hardcore nature of the supercar.

Just like the on the SV, the Haldex IV centre differential actively distributes torque between the front and rear axles. The only difference is that an additional three percent has been diverted to the rear axle in the SVJ. Torque vectoring is also available via the braking system. 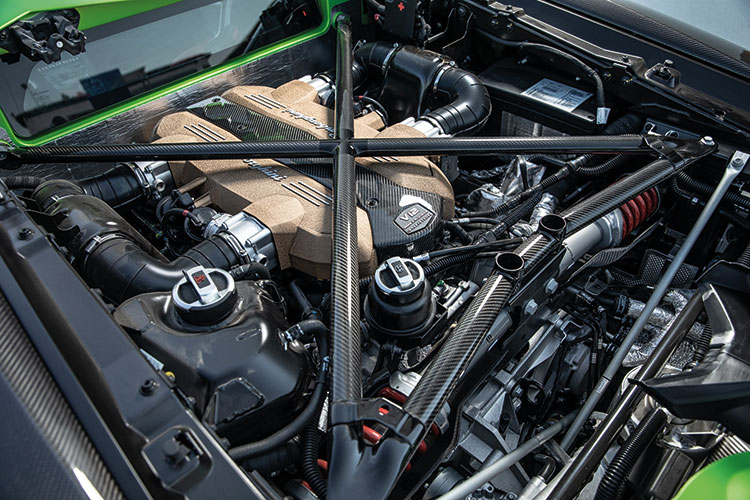 The SVJ’s MagnaRide suspension uses the same springs as the SV but the rear anti-roll bar is 50 percent stiffer and the magneto-rheological dampers have been uprated by 15 percent (for the stiffest setting).

While the car that set the record at Nurburgring-Nordschleife was fitted with optional Pirelli Trofeo R tyres, the ones that come standard on the Aventador SVJ are the P Zero Corsa.

Also tweaked for the Aventador SVJ are the algorithms for the rear steering system (LRS). It is now very nuanced compared to the S and SV.

LRS will counter-steer at low speeds and in-phase steer at high speeds, and it will also toe-in during braking. It can even operate each wheel independently to further stabilise the car as it traverses the corner. 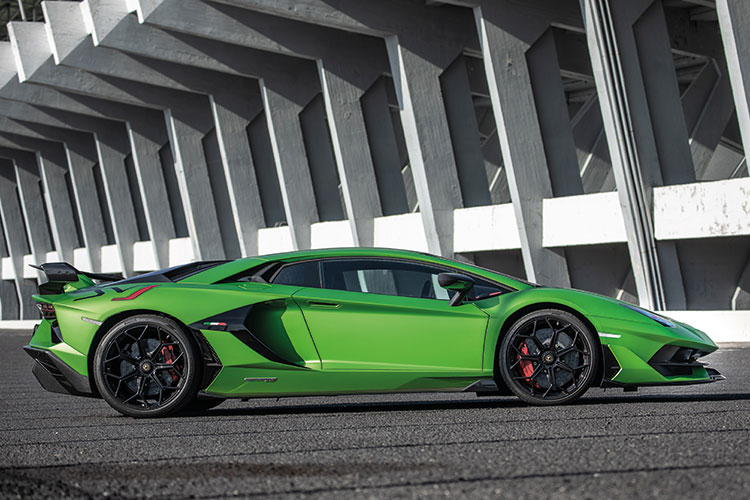 Said system offers familiar modes to choose from such as Strada, Sport and Corsa.

Strada is best left for daily driving while Sport is the most entertaining as it sends most of the torque to the rear axle, so the Aventador SVJ behaves as if it were rear-wheel-drive.

Corsa is best for fast, tidy laps as it curtails lurid slides and keeps the SVJ on the chosen cornering line by diverting some torque to the front axle. However, the gearbox can only be operated manually in this mode. 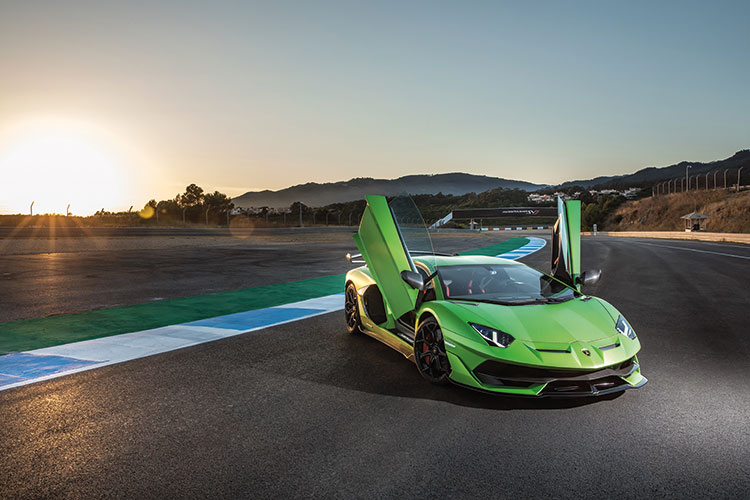 We were given 12 laps around the Estoril racetrack and half of those were spent coming to grips with the Aventador SVJ’s prowess.

As the track was recently resurfaced, it did not offer as much grip as before. However, rather than spoil the fun, it actually made assessing the car more enjoyable as I could reach the limits easier.

Forget using Strada at the racetrack – just start with Sport. In this mode, it is clear the Aventador SVJ is very sensitive to throttle inputs but it will not hurl you off the track as long as you respect the car’s limits.

Corsa curtails playfulness and wants to focus on getting the job done with neat laps and this makes the SVJ feels more stable. The throttle is also significantly less sensitive. Still, it doesn’t make the car less entertaining. 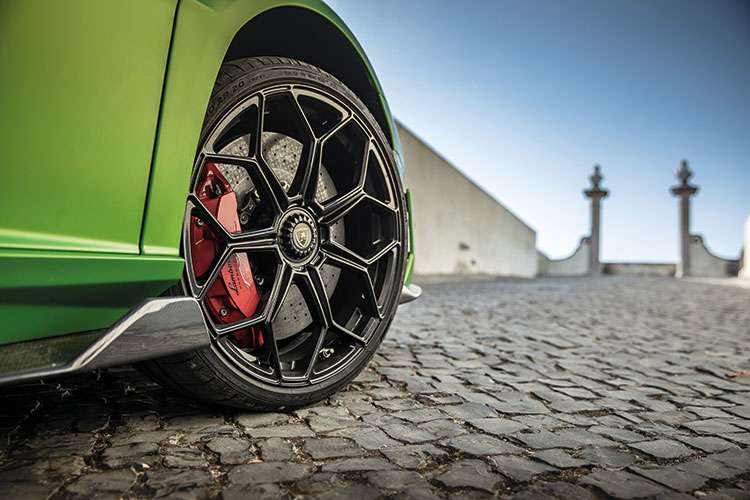 At the limit of adhesion, when you are unable to get any more response from the steering, a slight lift of the throttle mid-corner brings the Aventador SVJ back in line. Once you have mastered this, the fun begins. However, this is best left to the racetrack and not the streets.

Even when slipping and sliding, the Aventador SVJ handles with such finesse that it is the most enjoyable of the recent crop of supercars that rely so heavily on aerodynamic downforce.

That Lamborghini utilised every iota of its engineering know-how to make this supercar a reality speaks volumes of the company’s passion and expertise.

Sadly, production is limited to just 900 units and most are already spoken for. 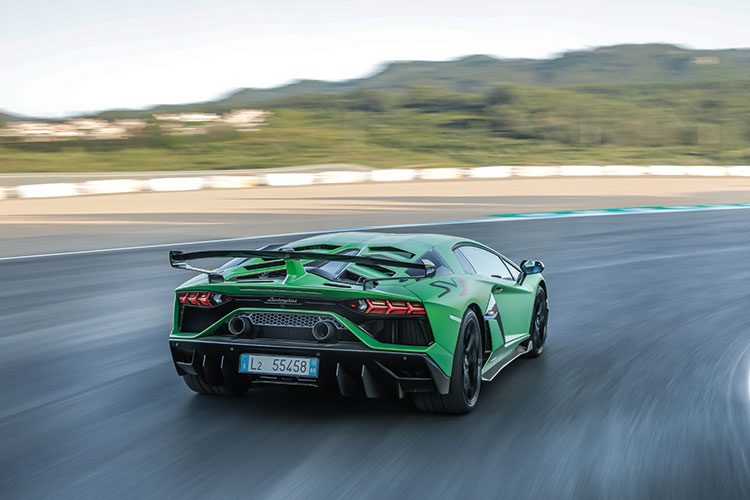 Better aerodynamics, more power and more traction result in a ferocious “bull” that laps the Nurburgring-Nordschleife quicker than a Porsche 911 GT2 RS.